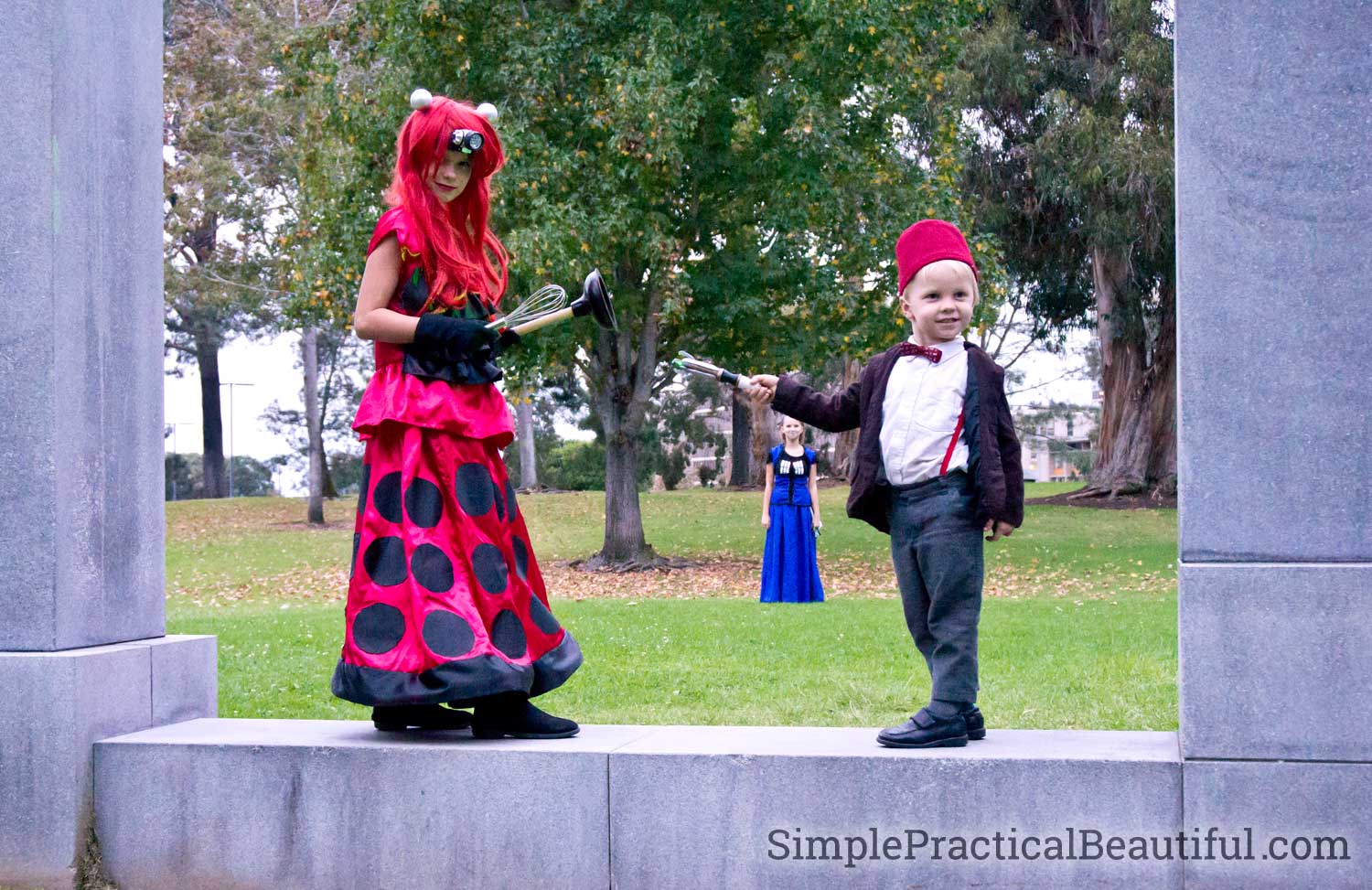 Use Simplicity’s 1095 pattern to make a TARDIS or Dalek costume for Halloween or your next cosplay, but alter it a little by adding your own details and touches. 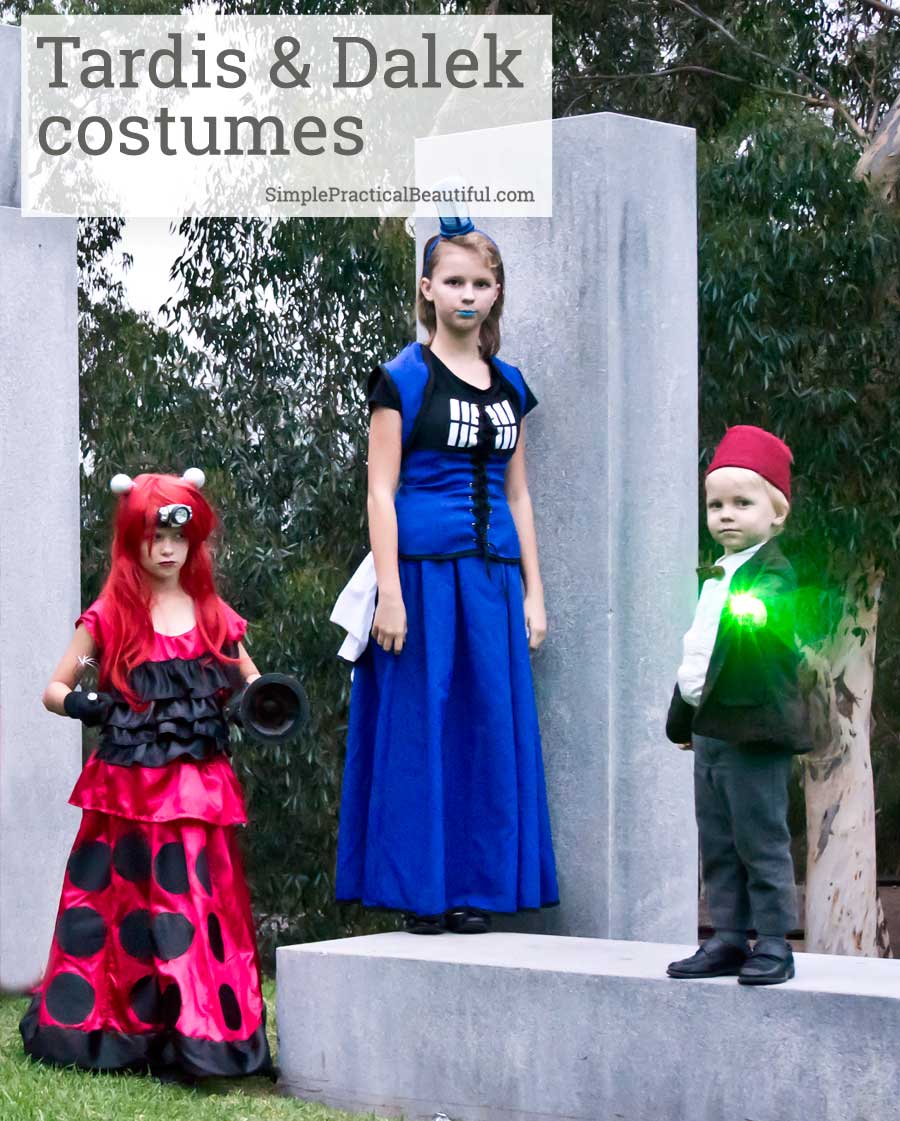 My family dressed up as characters from Doctor Who for Halloween. My son was The Eleventh Doctor, who was played by Matt Smith, and his costume included a sonic screwdriver, a fez, suspenders, and a bow tie. Because bow ties are cool. My husband and I were Amy Pond and Rory Williams. You can read all about how to make Rory’s foam arm bracers, foam shin armor, and helmet. My daughters were the Tardis and a red Dalek. Fortunately, Simplicity makes a great pattern for those two costumes, Simplicity 1095. 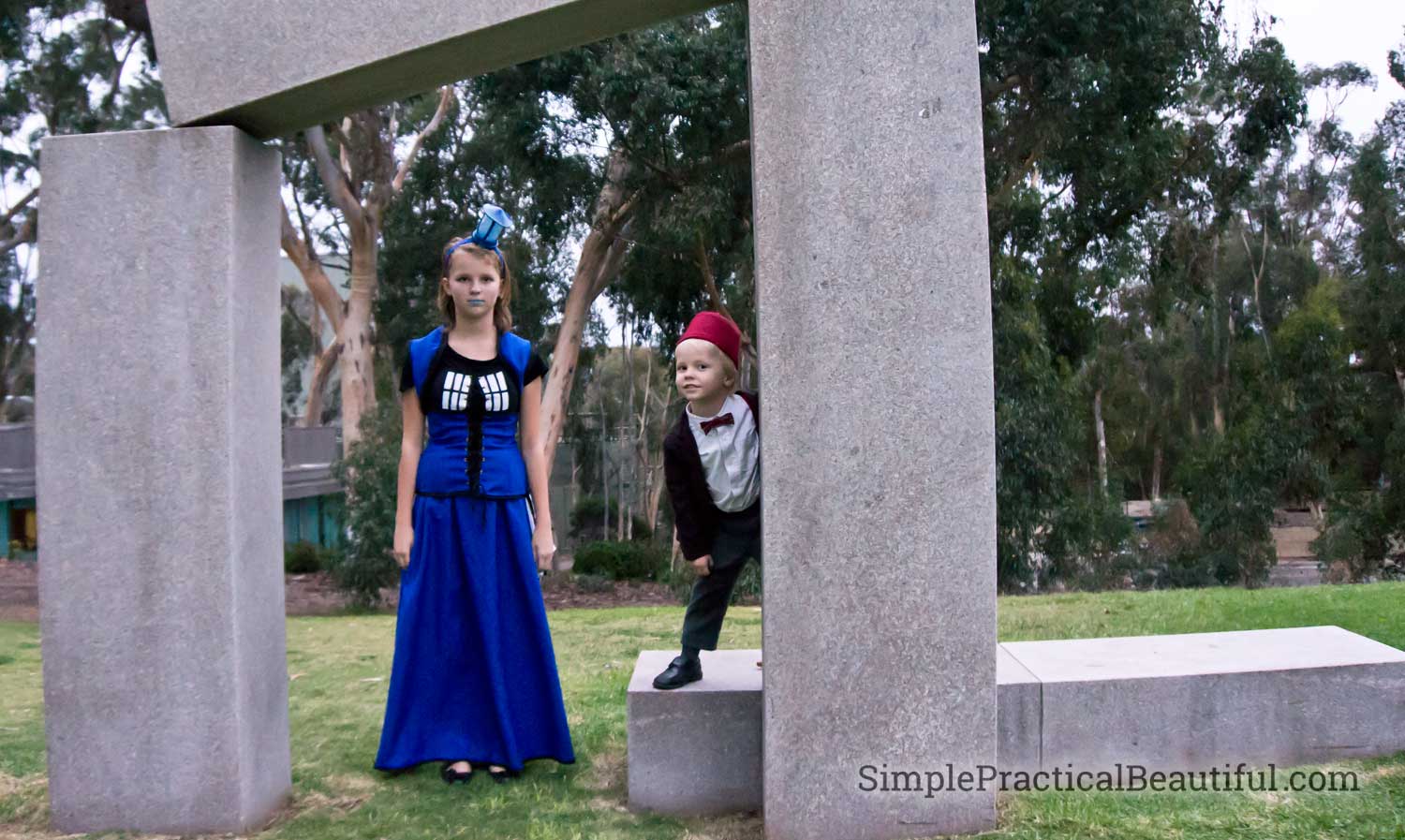 The corset is the key part of this Tardis costume. It makes the whole outfit look like a TARDIS and a corset makes the outfit look very steampunk. And it’s a very cute corset. It laces up in the back and the front.

We did run into a couple problems with the corset. First, it runs a little small, especially around the hips. We didn’t lace up the entire back, but left the bottom few grommets unlaced so that the front would fit better. I guess for a corset, it’s better to be too small than too big. Our second problem was the “windows.” The pattern directs to add the white appliqués with black accents as the first step. This should work except the pattern puts the appliqués in the wrong place. They ended up slightly off and I had to unstitch and reapply them before finishing the corset. 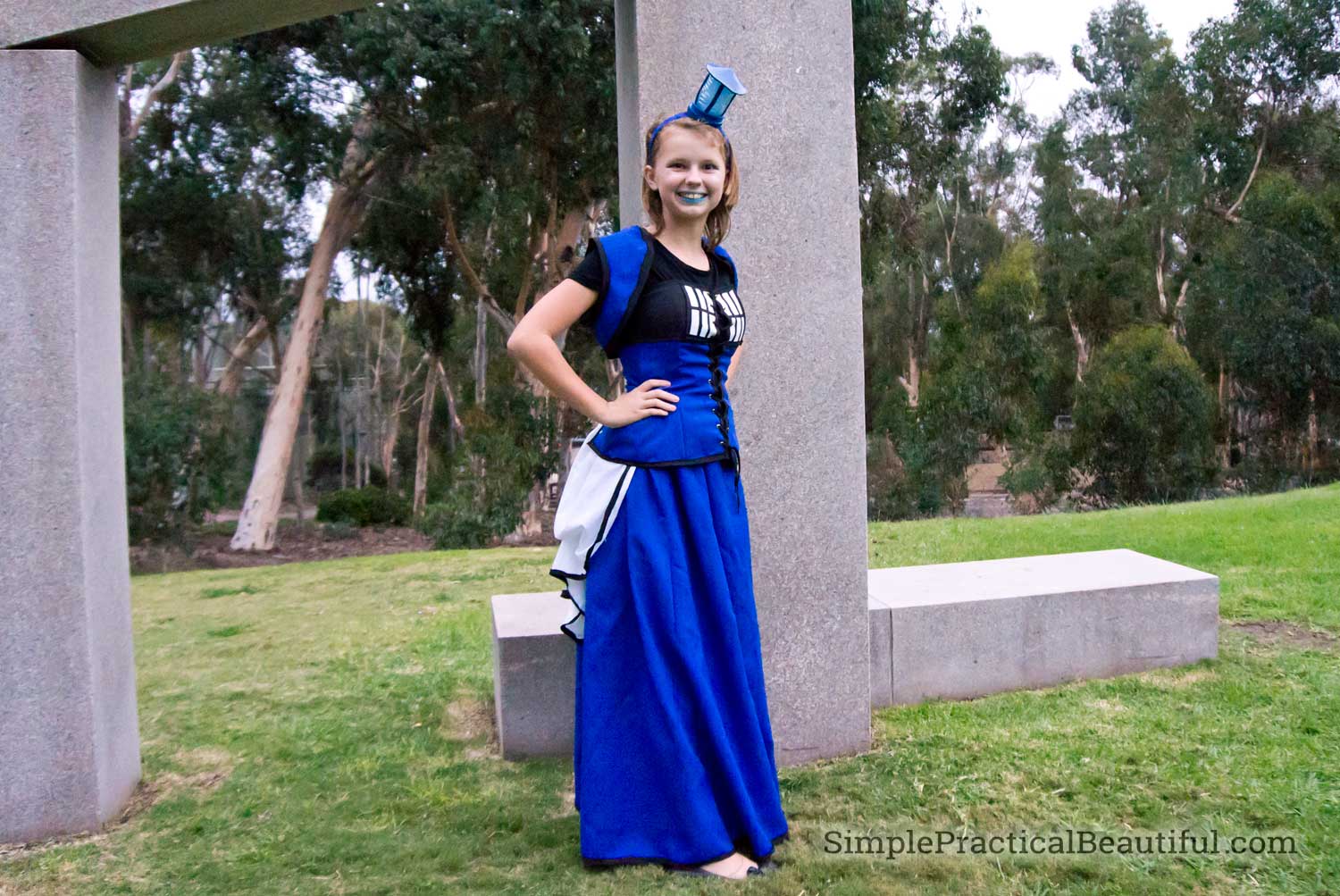 The Bustle and Skirt

The bustle from the pattern is simple and turned out adorable. It adds a perfect pop of white in the back of the costume.

The skirt is just a simple A-line skirt that is gathered at the top. If your fabric has much weight, as ours does, it becomes really thick at the waist, right where you want it to be thin to fit under the corset. (Maybe that’s why the corset felt too small.) If I had to make the skirt again, I would cut the pattern pieces for the skirt to be more triangular and less rectangular so there would be less fabric at the top. Then it would fit more smoothly under the corset.

The one change we made to the pattern was ignoring the “top.” The top from the pattern is really just a tube of fabric to be worn under the corset. It almost looks like a mini skirt that you wear above the bust. It’s a little strange. Instead, my daughter just wore a simple black t-shirt under the corset. It was much easier, more comfortable, and much less revealing. 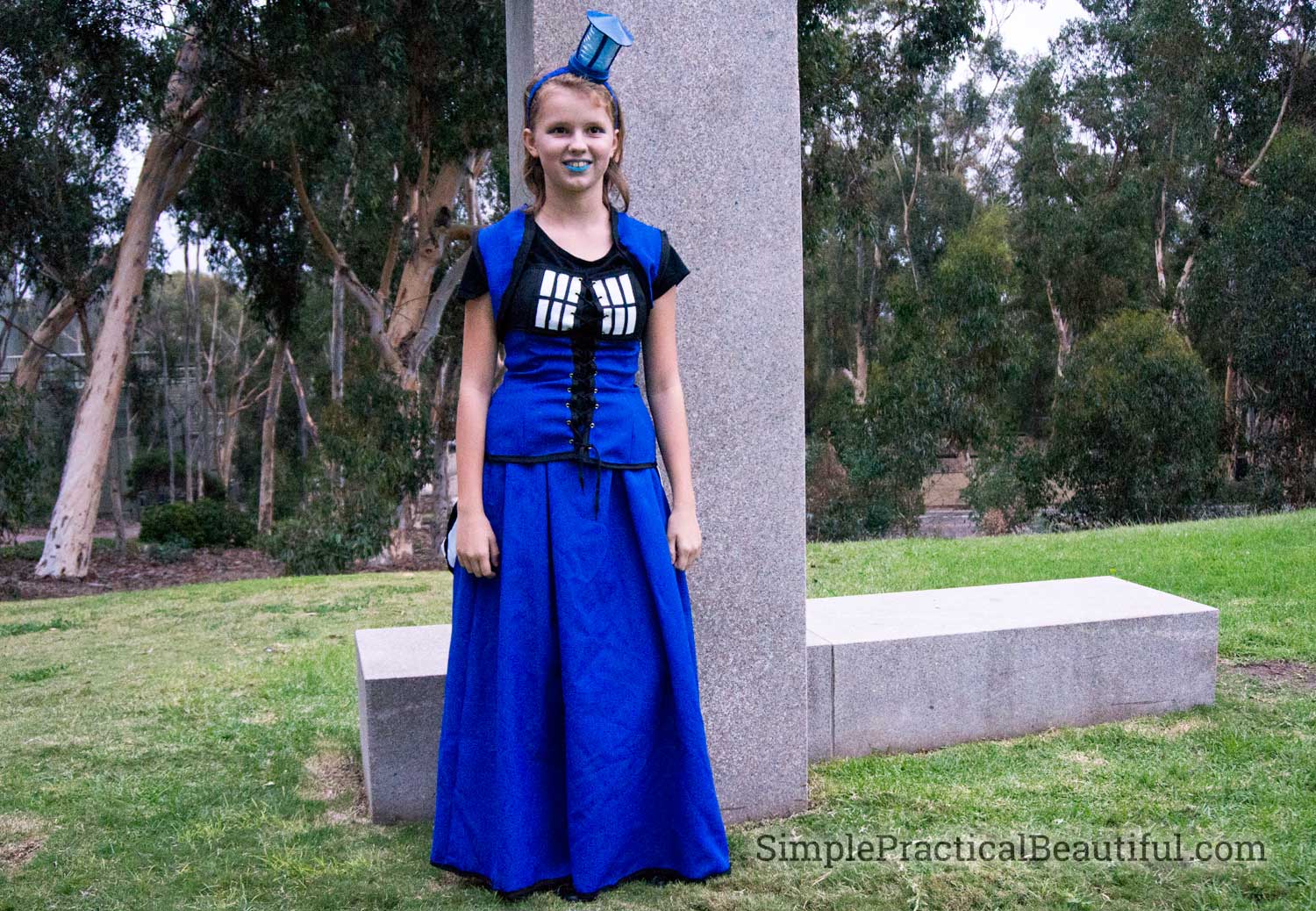 Finally, we added a headpiece that was not included in the Simplicity Tardis pattern. It’s meant to be the light at the top of the Police Box. We made it last minute out of things we had around the house, so it’s pretty simple to make. I’ll write another post soon with a tutorial on how we made it.

We made a few more alterations to the Dalek pattern than we did to the Tardis pattern. Partly to make it look more like a Dalek and partly to get a women’s pattern to fit my 10-year-old daughter.

First, we had to shorten the skirt. We did that simply by cutting 8 inches off the bottom of the skirt pattern pieces. This left the skirt with only 3 rows of black circles, instead of the more accurate 4 rows, but it fit. And that’s more important.

The TARDIS corset made the costume, but the Dalek corset did the opposite. A corset might look steampunk, but it looks nothing like a Dalek. So we skipped the corset.

Instead, we used a simple t-shirt pattern to make a red shirt and added four rows of black ruffles to the front to mimic the black accordion part of a Dalek. Then we added a red peplum (larger ruffle) to the bottom of the shirt. 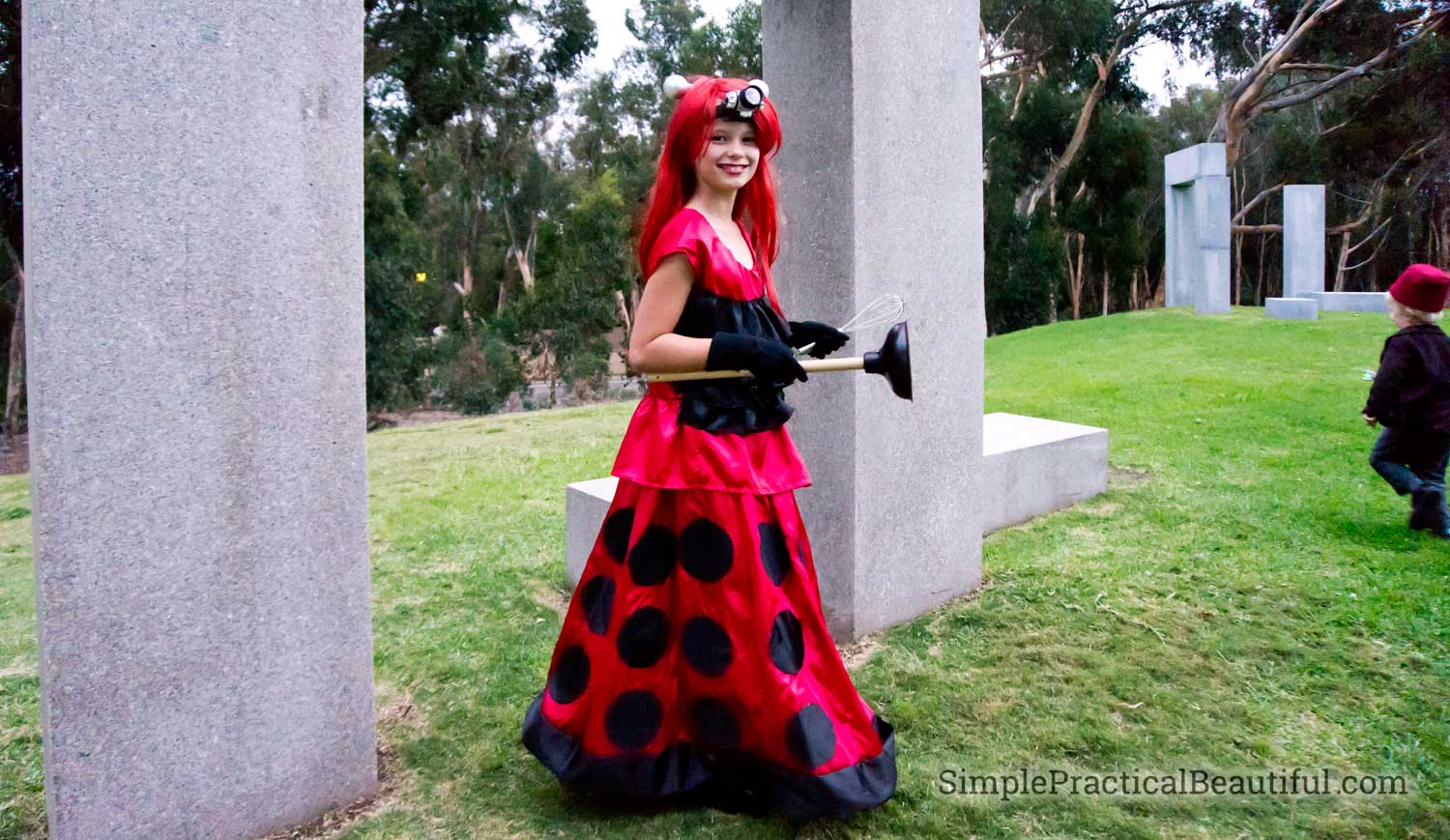 The pattern front suggests getting a wig to wear with the costume. We bought a red wig on amazon.com for a good price. We’d planned to cut it short like the Simplicity pattern showed, but my daughter really liked having long, thick hair.

She wore a headlamp under the wig but coming out the front to be the Dalek’s eye. This light was great for trick-or-treating and dark Halloween parties. We also added two round, plastic Christmas ornament to the wig with bobby pins to finish off the look a the Dalek head. 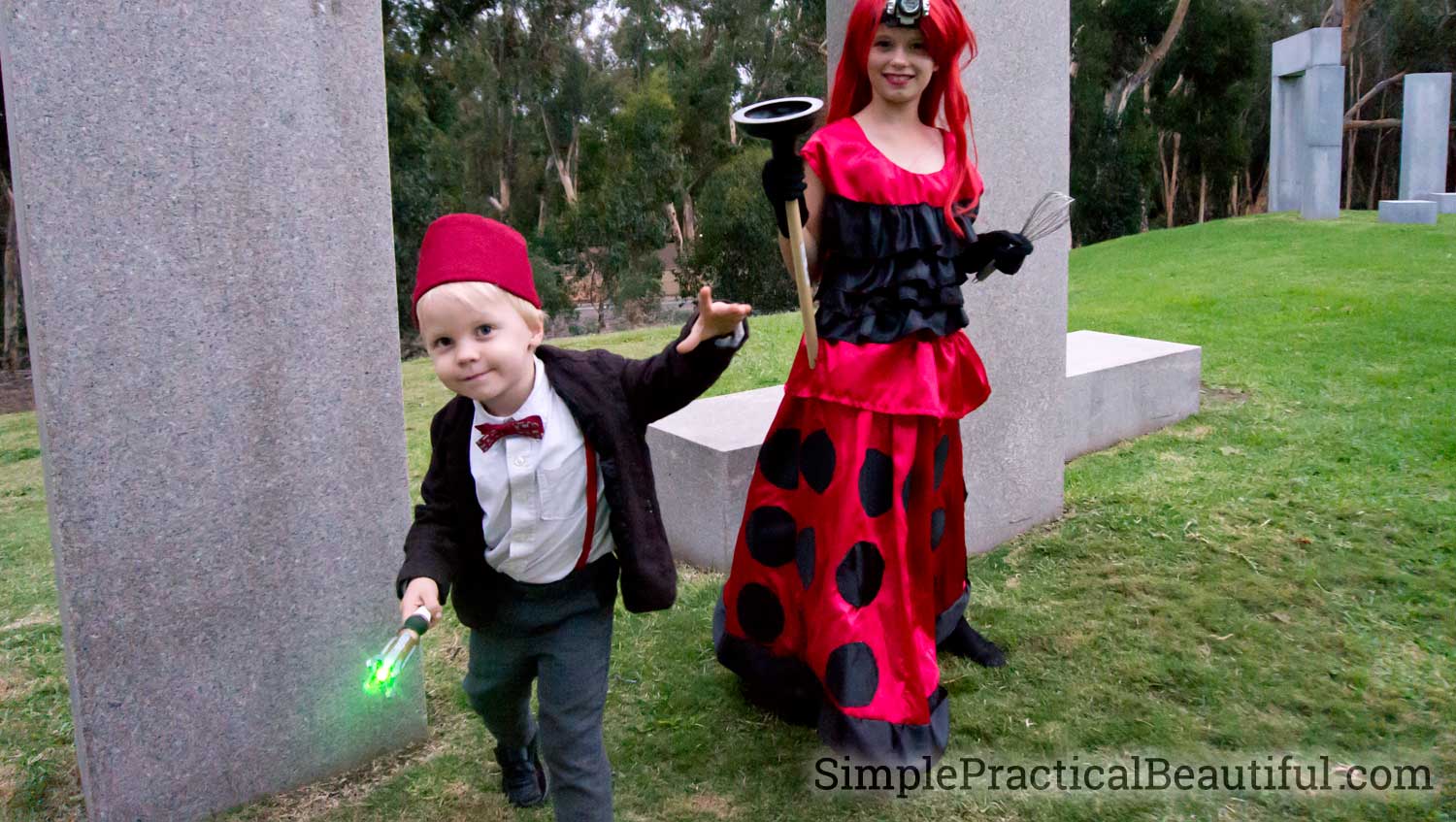 My daughter carried around a plunger and a whisk. If you’re going to be a Dalek, you have to have those. Unfortunately, we couldn’t find a black plunger, so we had to paint it with Rust-Oleum Universal paint.

She also wore black elbow-length gloves, because they look cool.