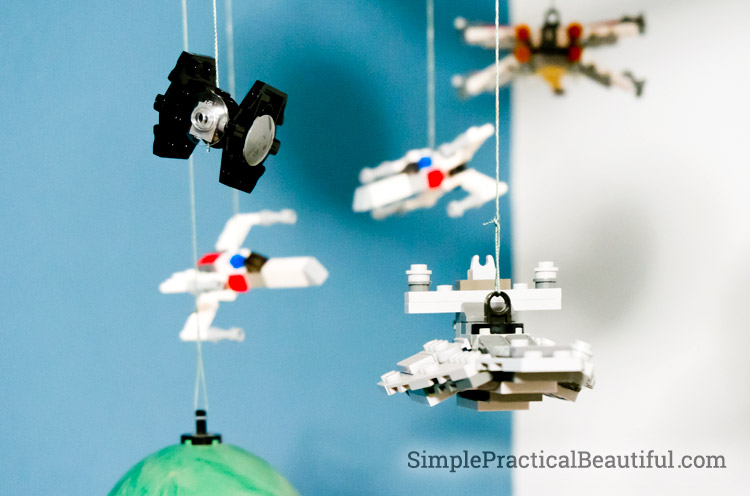 A long time ago, in a galaxy far, far away…we planned a Star Wars themed nursery. Now, two years later, it’s finally coming together. Today, I have two parts of the nursery that I’m so excited to share with you: the Star Wars Lego mobile and the Wampa rug. You can also read about the star wall and vintage art we hung, the death star light, and the industrial pipe shelves that hold Star Wars Legos. 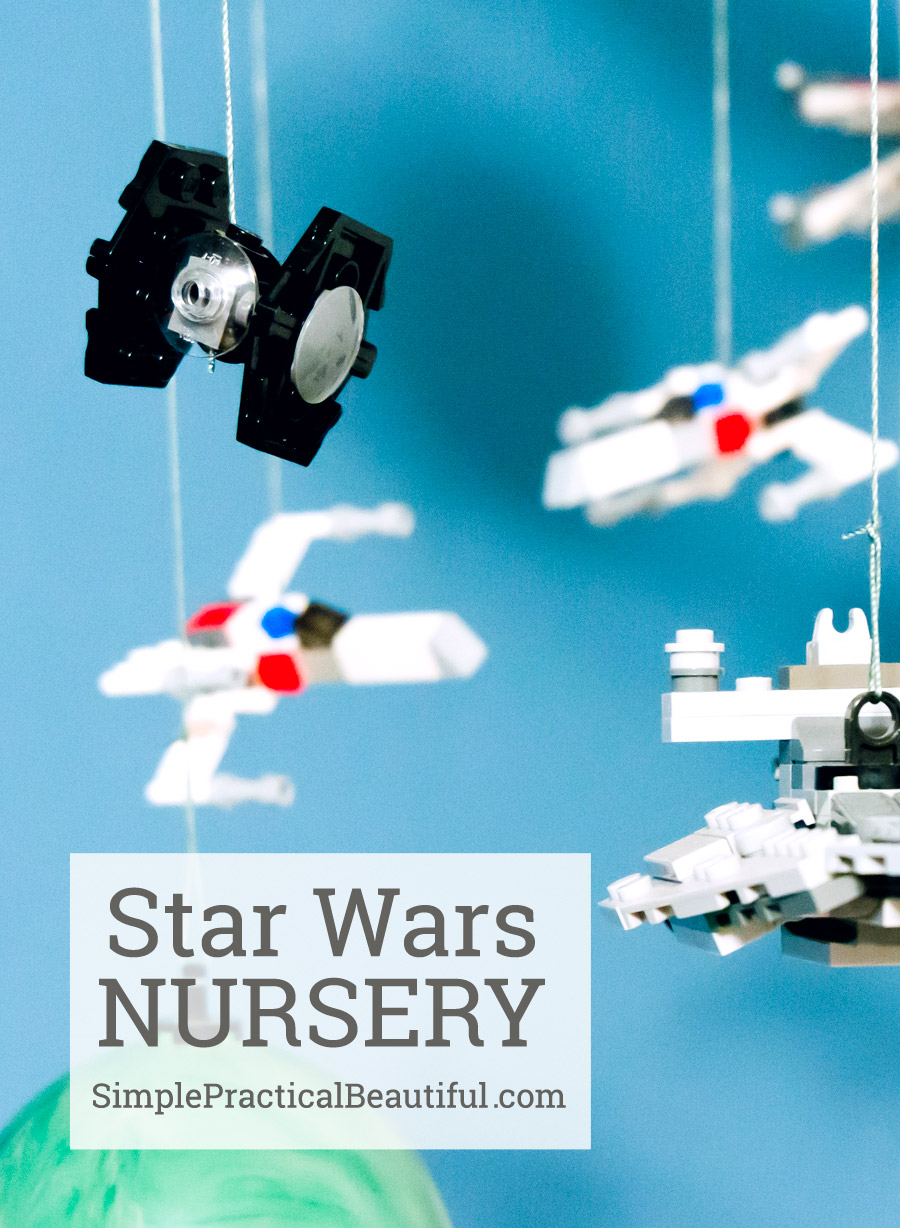 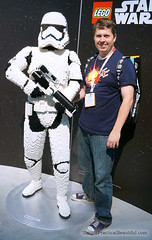 My ingenious husband created a Lego mobile with some Lego Star Wars mini sets and some master-builder ingenuity. He bought four mini sets that each come with a planet, a spaceship, and a mini figure. He didn’t use the mini figure because he wanted them for playing, and they would have looked strange floating on a mobile. I’ve added affiliated links to the sets on Amazon.com, so you can see what the Legos look like in their packaging.

Here’s a few of the planets: Yavin 4, the Death Star, and Coruscant. 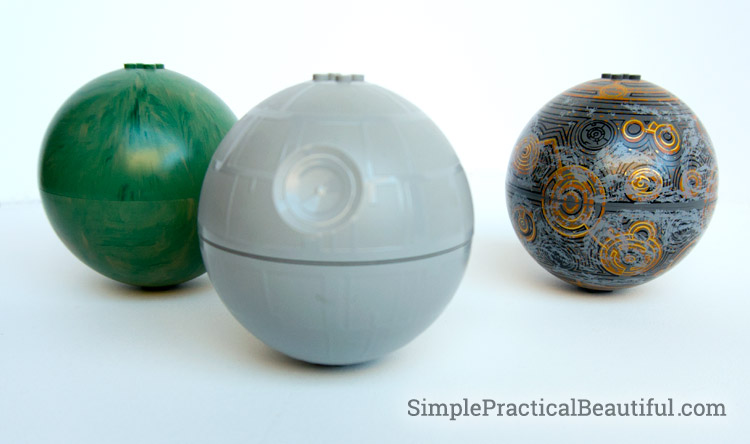 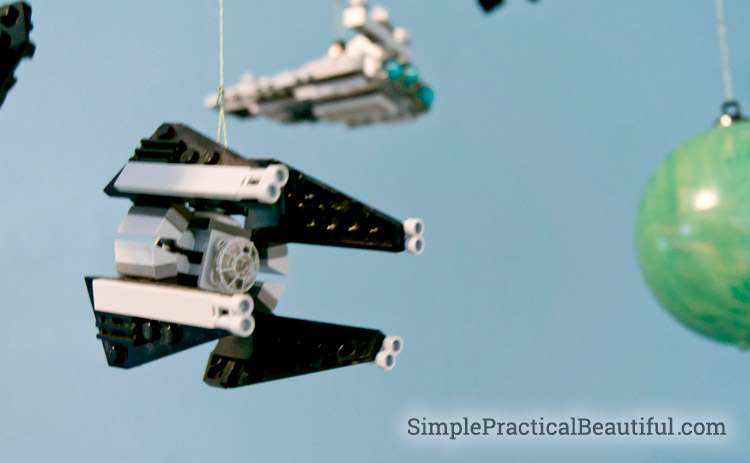 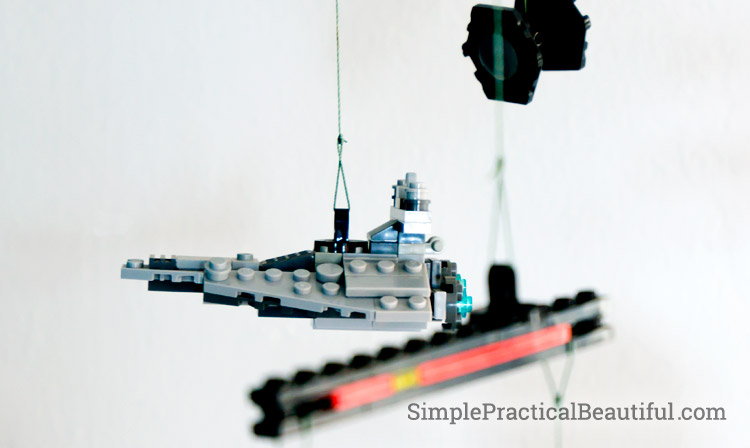 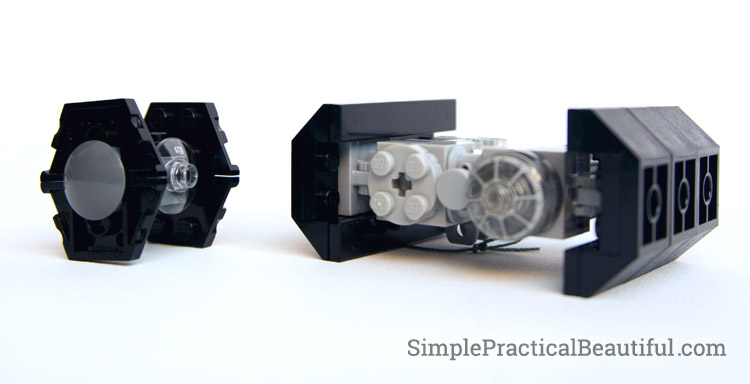 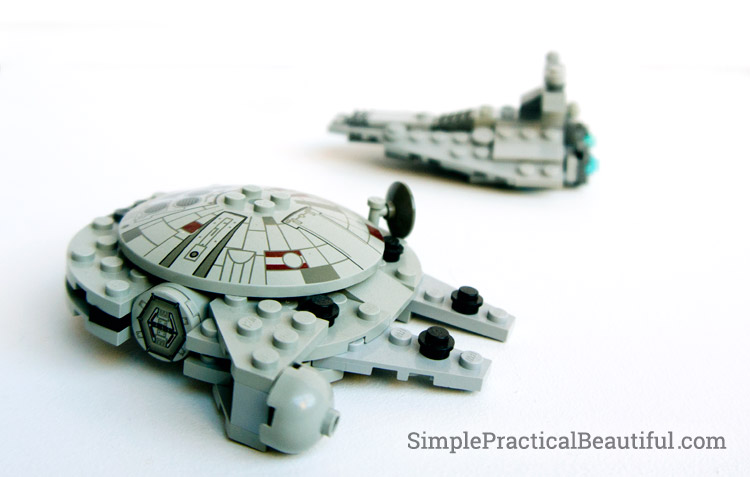 The asteroid field, that comes with the TIE Bomber, looks like a sphere of space. 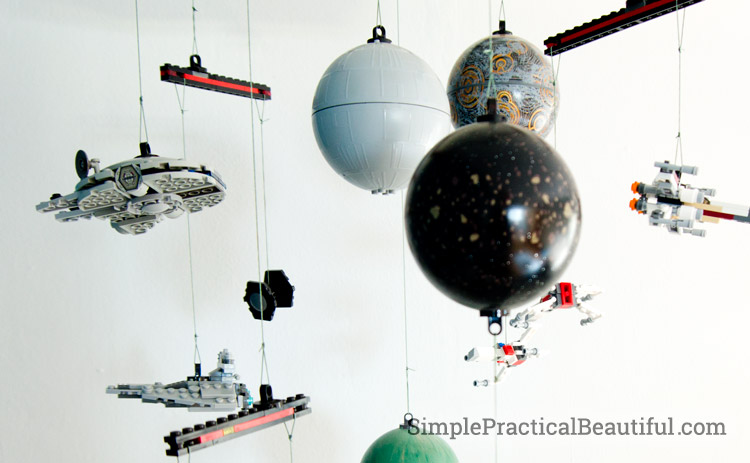 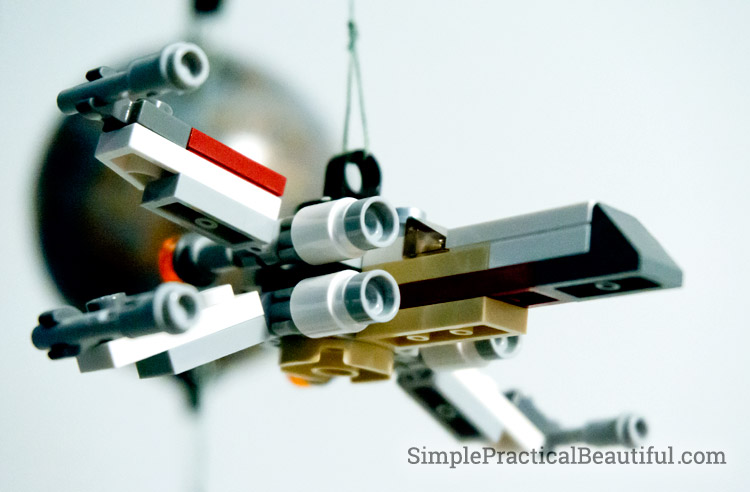 The smaller, simpler X-Wings were from a special build at Toys R Us. 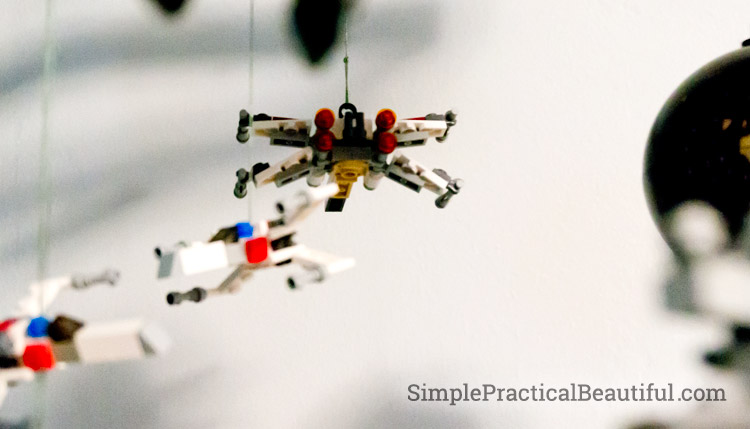 To create the top of the mobile, my husband used an idea he found at BrickBending.com to bending long strips of legos. He first tried making a circle, but it was too big for a mobile. 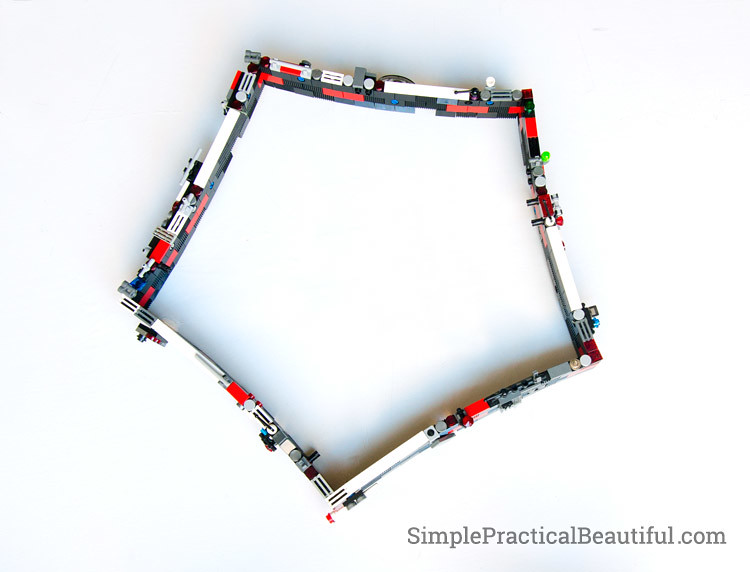 Then he saw the Brick Bending – Lego Hyperbolic Pentagon video on YouTube and decided to create a pentagon by building a square with three rows of single-wide bricks then adding a fifth side and slowly stretching the Legos to connect it. All of the sides are the same length. Stretching the legos add a little bit of a curve and makes an interesting shape. 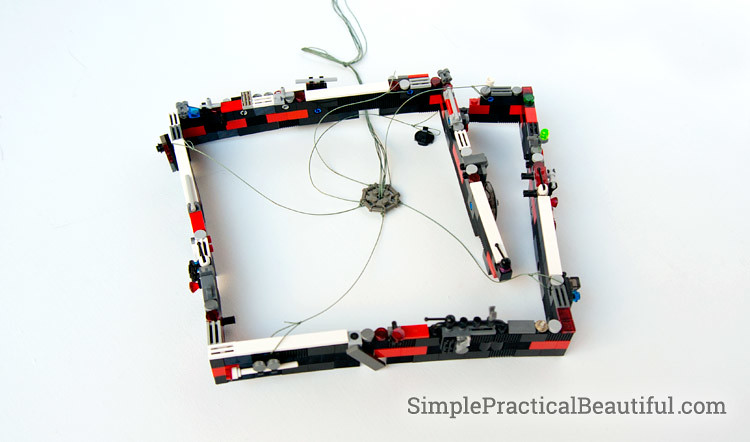 The pentagon top is made of red and black single-wide bricks. Most of the black bricks have striped sides to add texture. To make it more interesting, he added details and pieces that make it look more like a Lego spaceship, such as grids and knobs and exhaust pipes. 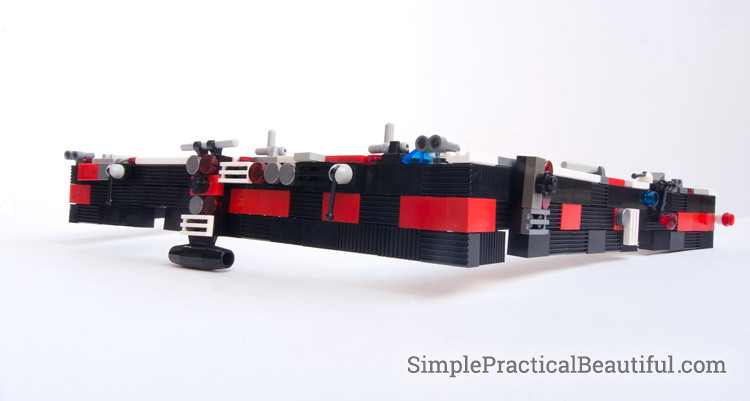 Hanging Up the Mobile 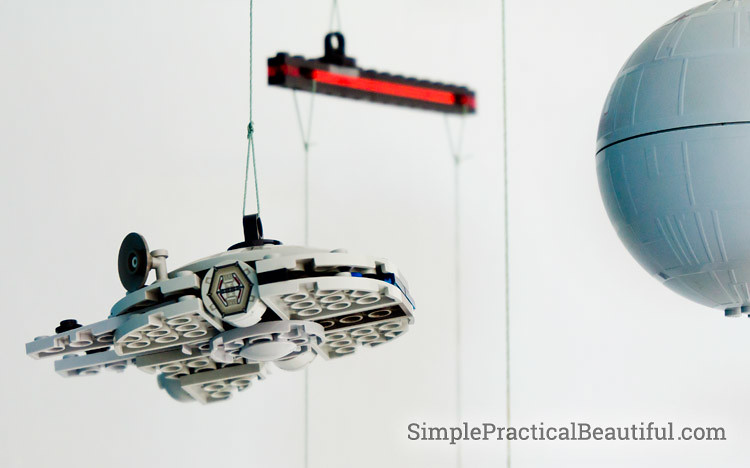 Hanging the Lego ships and planets on the mobile was a lot of trial and error. The Death Star hangs in the center. The other planets and ships hang from the sides of the pentagon. He built cross bars in red and black for hanging more than one ship. Leveling the bars involved a lot of moving the string around to find where the ships would hang balanced. 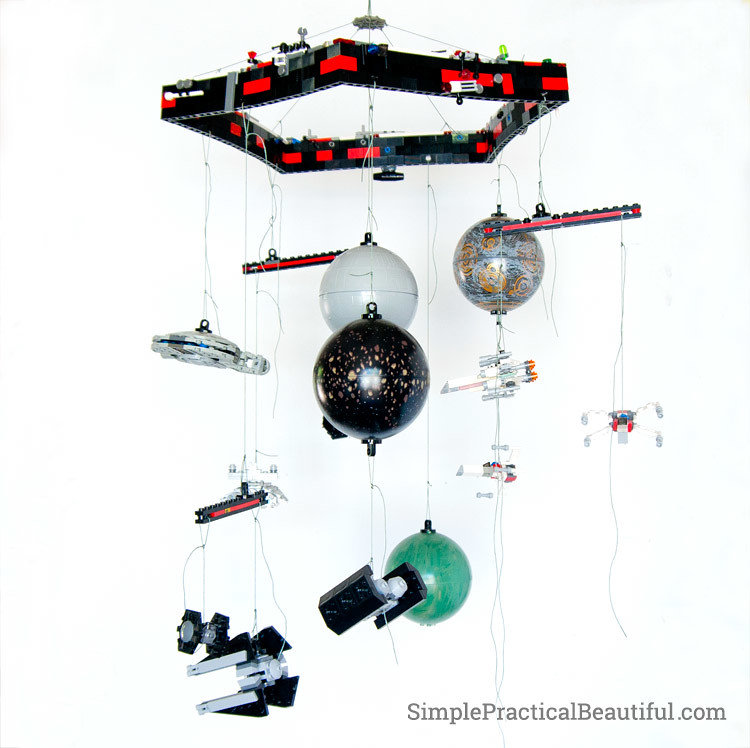 Each ship was attached with a string tied onto individual 2×1 bricks with a hole (Technic Bricks) that are part of the bottom of the pentagram. The planets and some of the larger ships were attached with a black 2×2 round plate with eye. Those round plates came with the mini sets. The whole mobile was hung from a hook screwed into the ceiling. 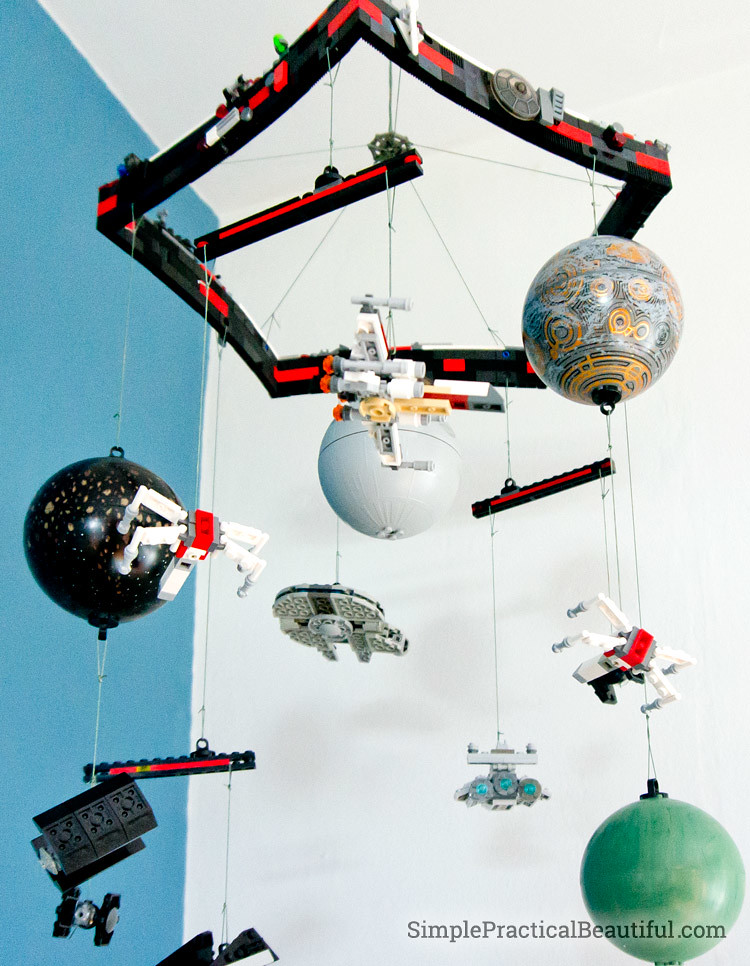 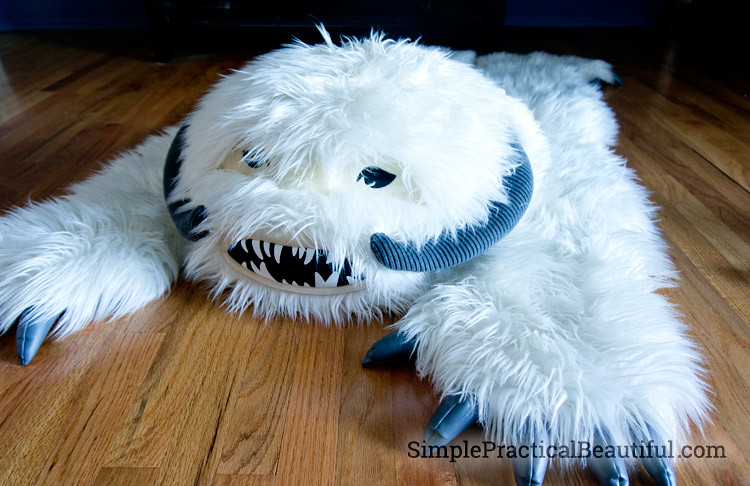 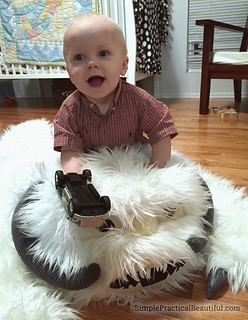 Check out this cute Wampa rug. It pulls the whole Star Wars themed nursery together. Plus, my toddler LOVES it. He calls it his monster (pronounced “mon-mon”). I was a little worried about putting a white rug into a kid’s room, but I figure the dirtier it gets, the more realistic the Wampa will look. We just shake it out every once it a while. Yes, you can actually wash it, but that just feels like an exercise in futility to me. The Wampa rug is soft and cuddly with non-slip dots on the bottom. The head is like a pillow. It’s a little small for a throw rug, but it’s the perfect size for a nursery rug. We watched this funny Star Wars Wampa Rug Review video before we bought it. 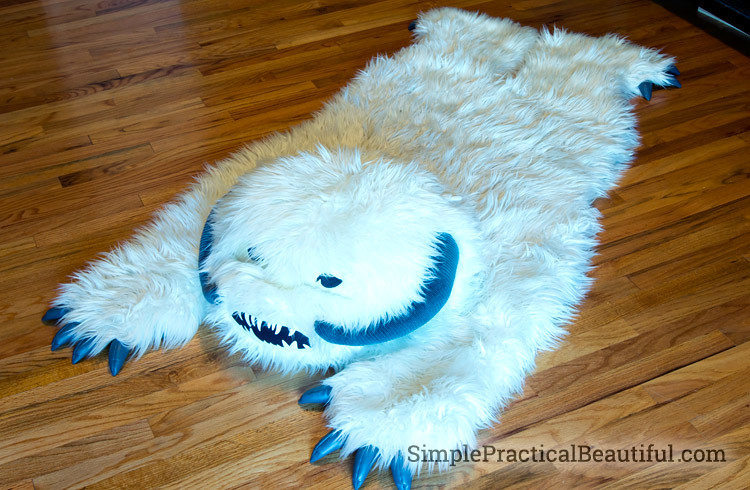 More posts about the Star Wars nursery are coming. You can read about the industrial pipe shelves that we built to display even more Star Wars Legos! And we later decorated the deep blue wall with stars and concept art from The Empire Strikes Back. 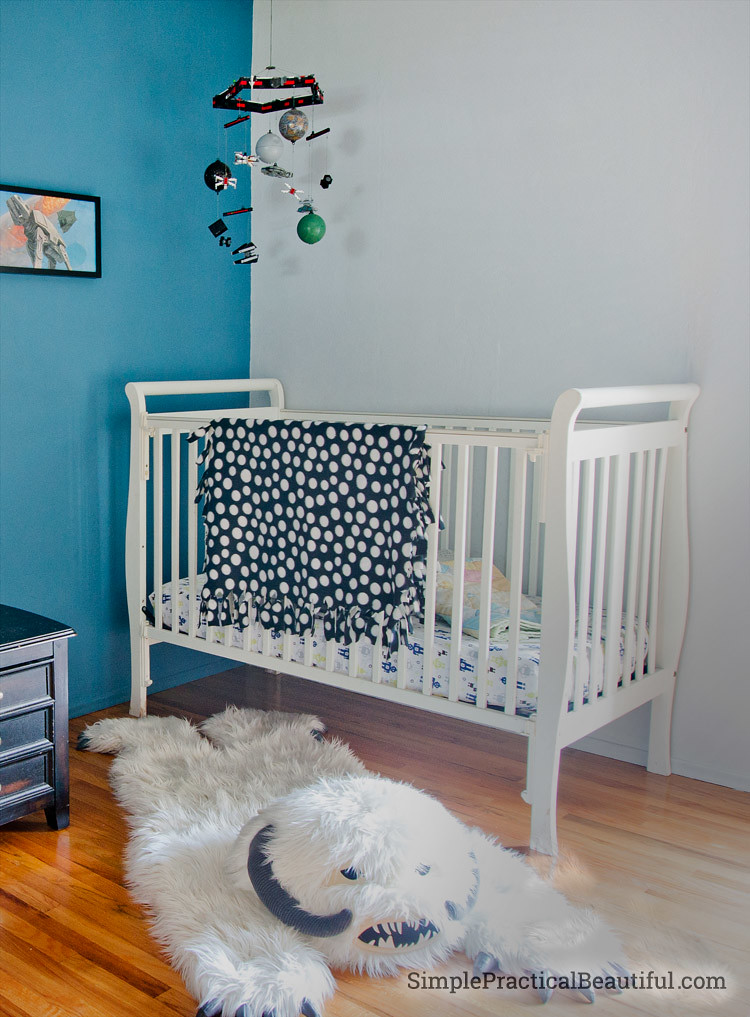