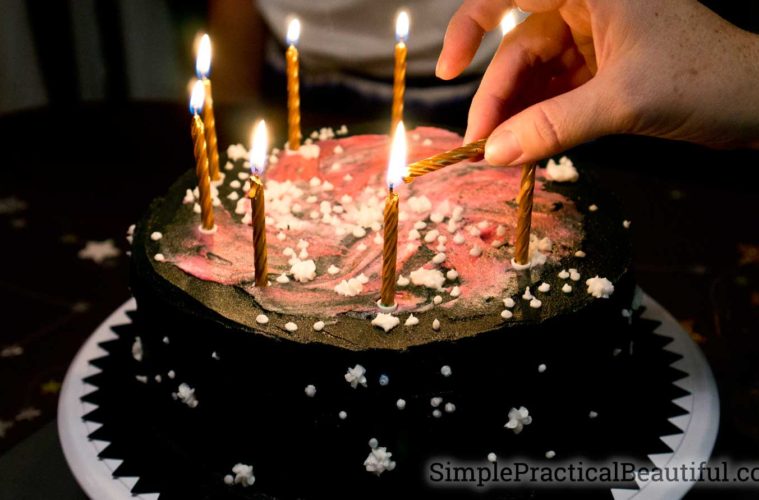 Throw a star gazing birthday party with fun constellation activities and exploring the night sky. Star gazing is a fun party idea for teens and tweens and older kids. 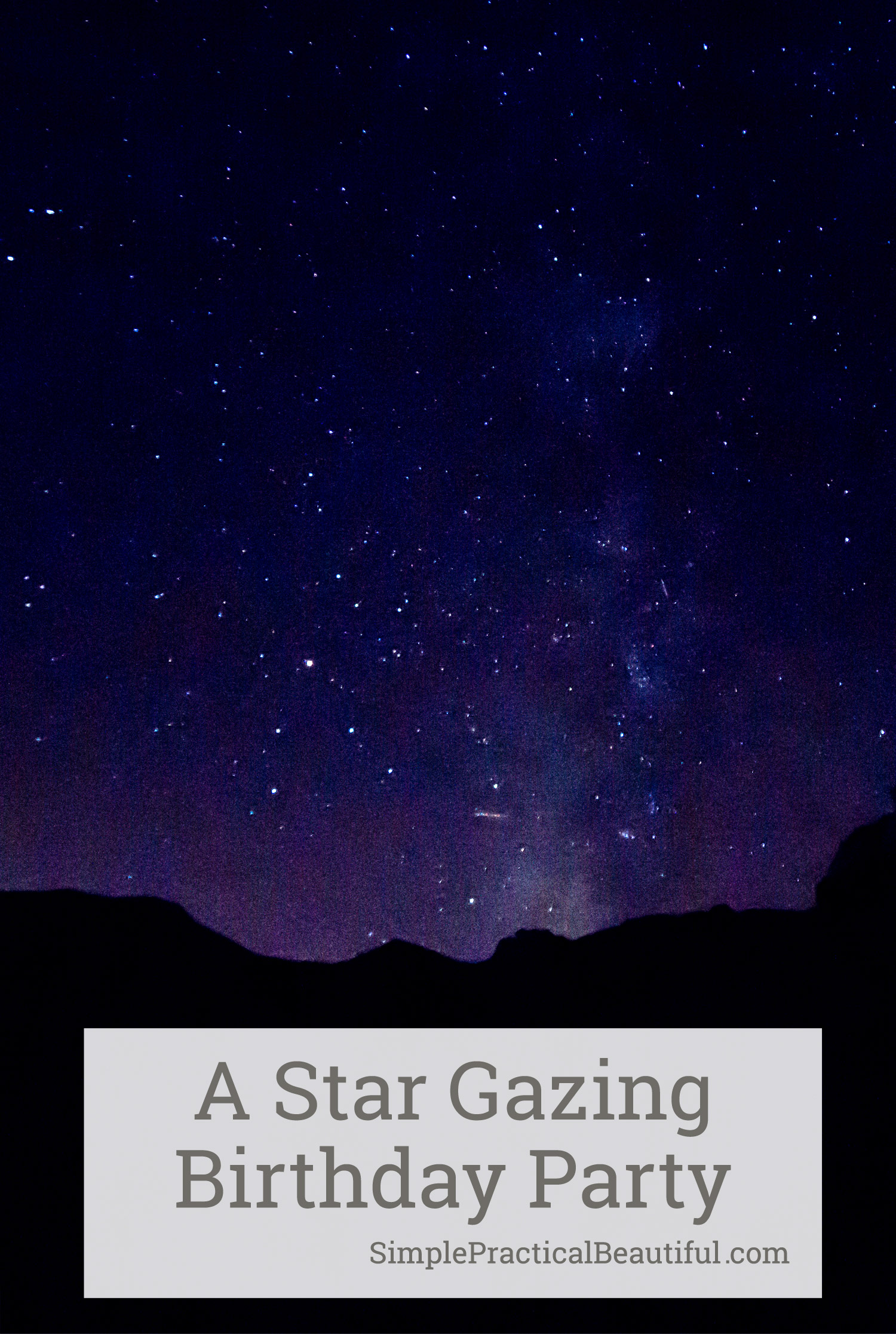 Our family has always enjoyed star gazing, especially on our camping trip to the desert last year (where we took the previous picture). For my daughter’s birthday, she wanted to share that experience with her friends. So we invited several girls over for a star-gazing birthday party. We live near a big city, so our night sky wasn’t nearly as starry as in the desert, but everyone had fun and learned a few new things about the night sky.

The Date and the Invitation

Plan your party on a night when there is no moon or a very slim moon to have the best view of the stars. If you can, pick a date where something impressive (and easy to see) is happening in the sky. SeaSky.org gives a calendar of things happening in the sky each month. Also, plan the party to happen as late in the evening as possible. We started our party some indoor activities while it was still light, then moved outside when the sky was completely dark.

Our invitations to the star-gazing party were pretty simple. Just black constructions paper with foil star stickers on it. We printed out all the details and glued it onto the back.

Our dining room, where most the of the indoor part of the party happened, has lots of big windows. So I decorated by hanging black and white plastic tablecloths up in front of the windows, with the black tablecloth behind the white tablecloth. I cut the white tablecloth into strips after it was hung up, the tied a knot at the top of each strip to give a black and white striped look. The tablecloths were hung on the windows for a more practical purpose than just decorating. They blocked the light from inside the house from coming out when we were outside looking at the stars. It was important to leave the lights on inside, so I could get supplies and guests could find the bathroom, but we didn’t want that light leaking outside and ruining our star-gazing. 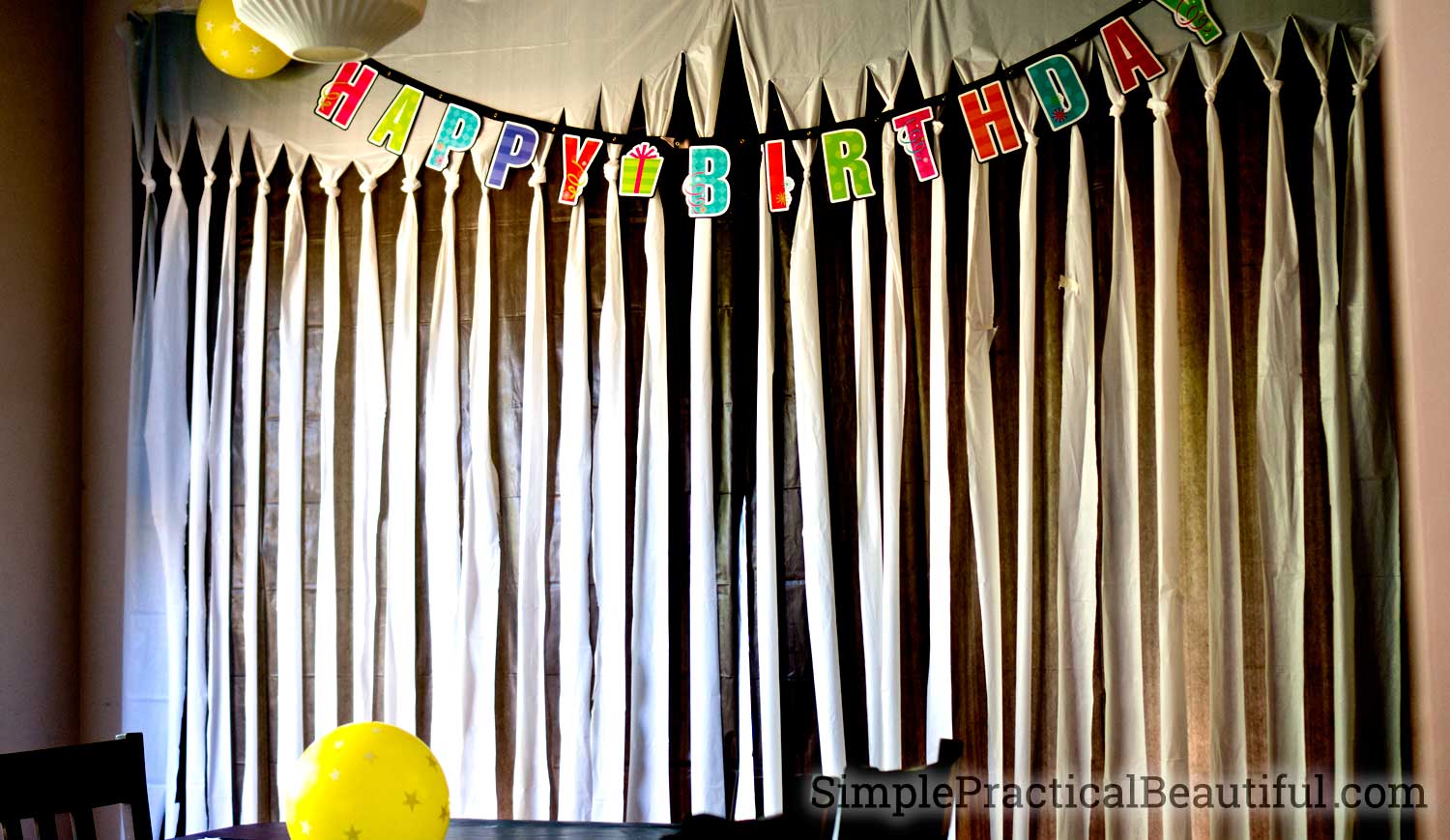 My daughter also decorated the table by making a place mat for each guest from a piece of black construction paper. She used foil star stickers and a white crayon to draw a constellation on each place mat. These constellations were great when we started our constellation activity later. 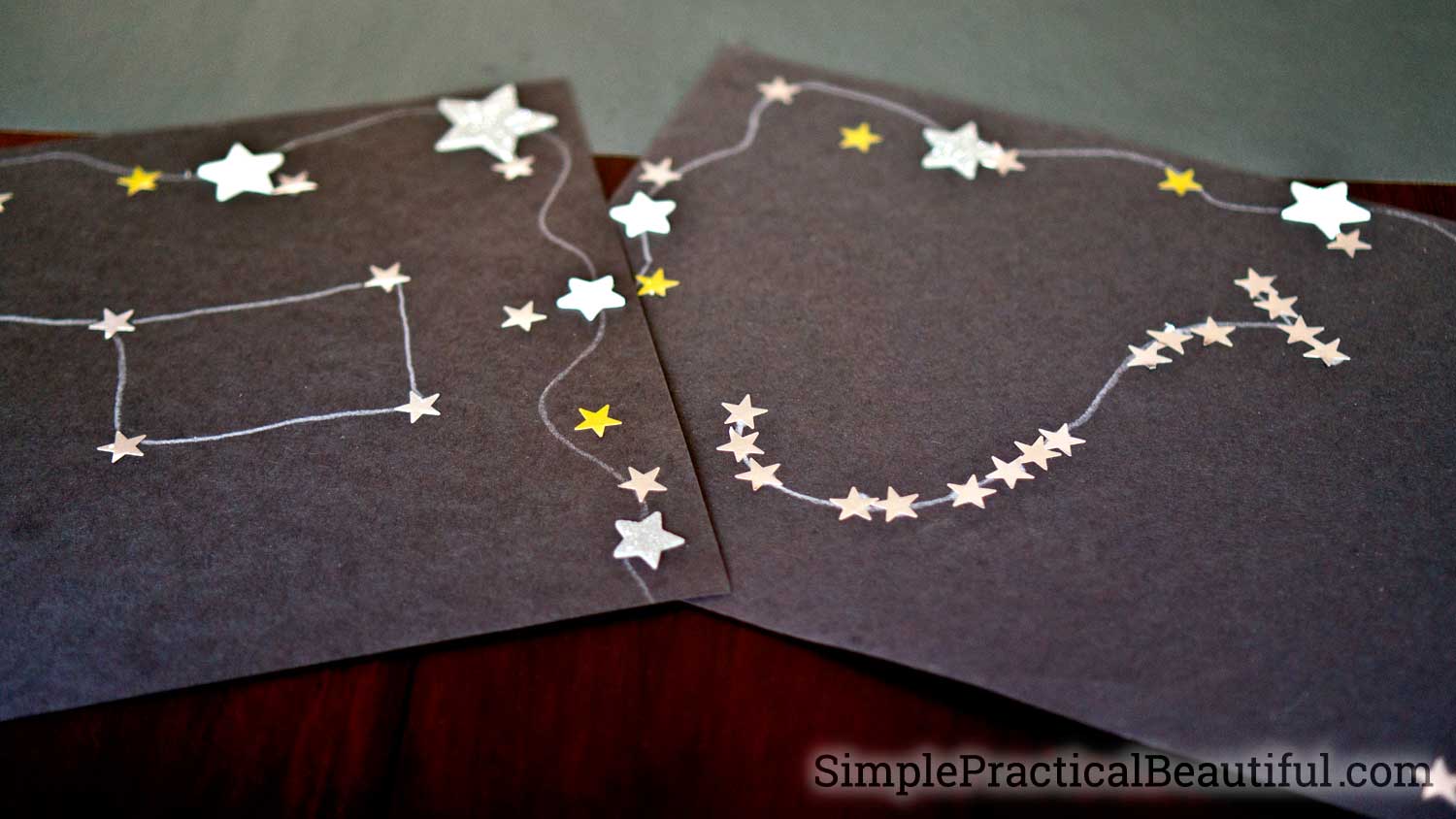 We started the party with dinner. Each guest made her own pizza. I’d prepared dough and divided it into small portions for each guests to roll out and add sauce and topping. Personal pizzas are a great dinner option when we have lots of kids over because everyone chooses what they want on their own pizza so you don’t have to worry about picky-eaters not liking their dinner. It’s easy to prepare the dough and toppings, and only takes 15-20 minutes in the oven to cook while the kids are waiting. 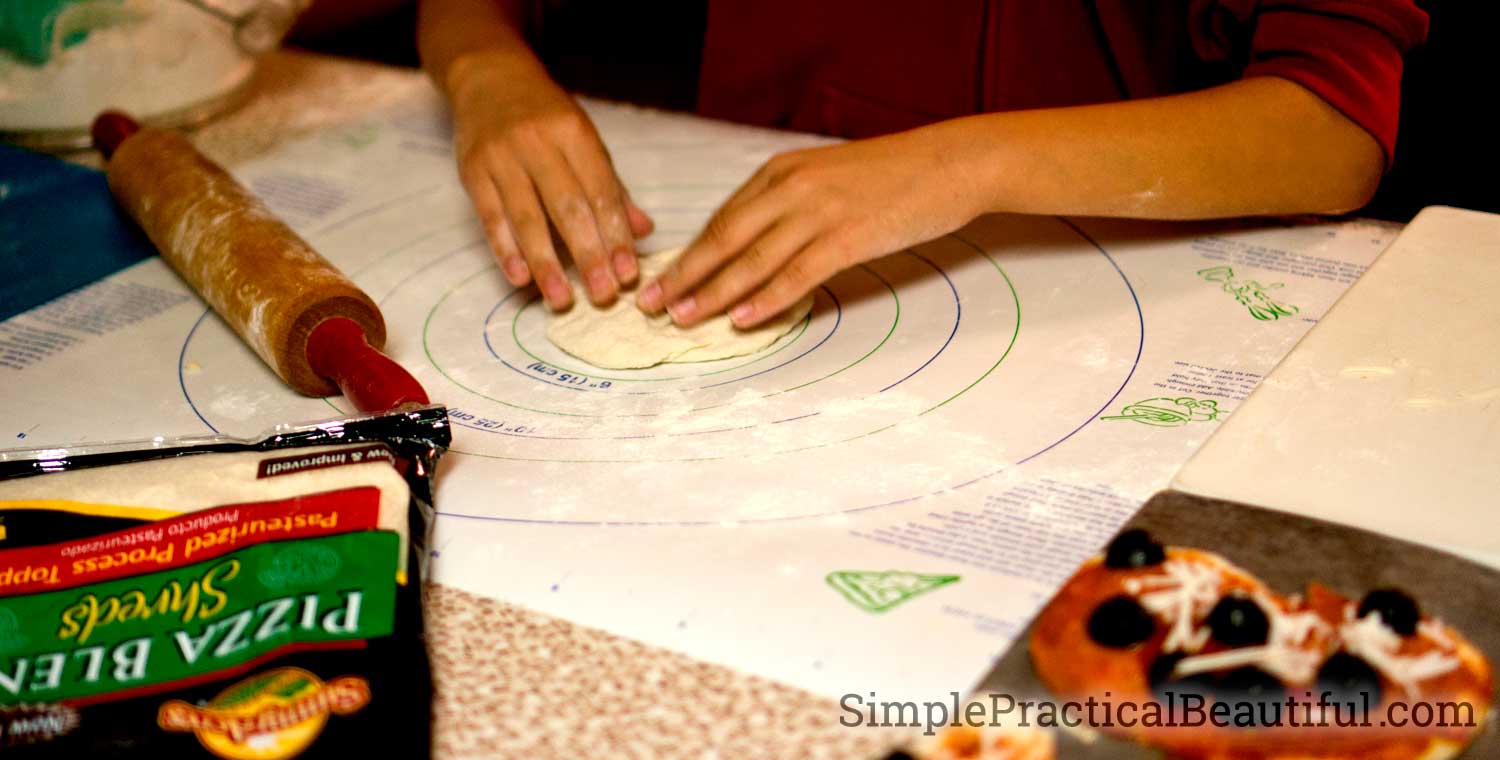 While the kids were waiting for their pizzas to cook, we talked about constellations. I had a few books for them to look at and the place mats helped too. Then, while they ate dinner and after, we made constellations on small cardboard circles. 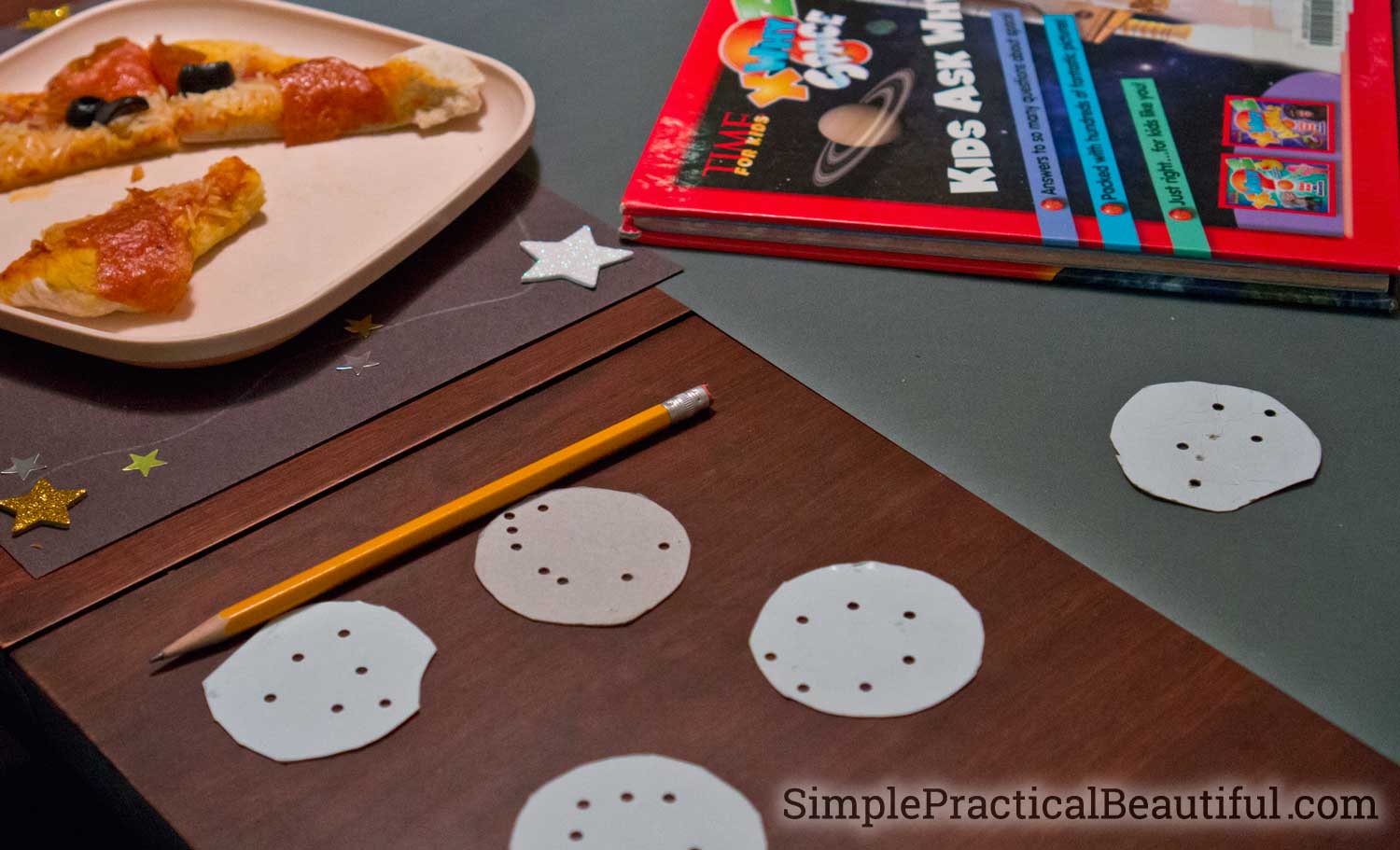 The kids drew a picture of something simple on the circle (a cat, a heart, a flower) then used a small hole punch to make stars in their constellations. (My kids cut out the circles, so they aren’t perfect, but they worked just fine.) 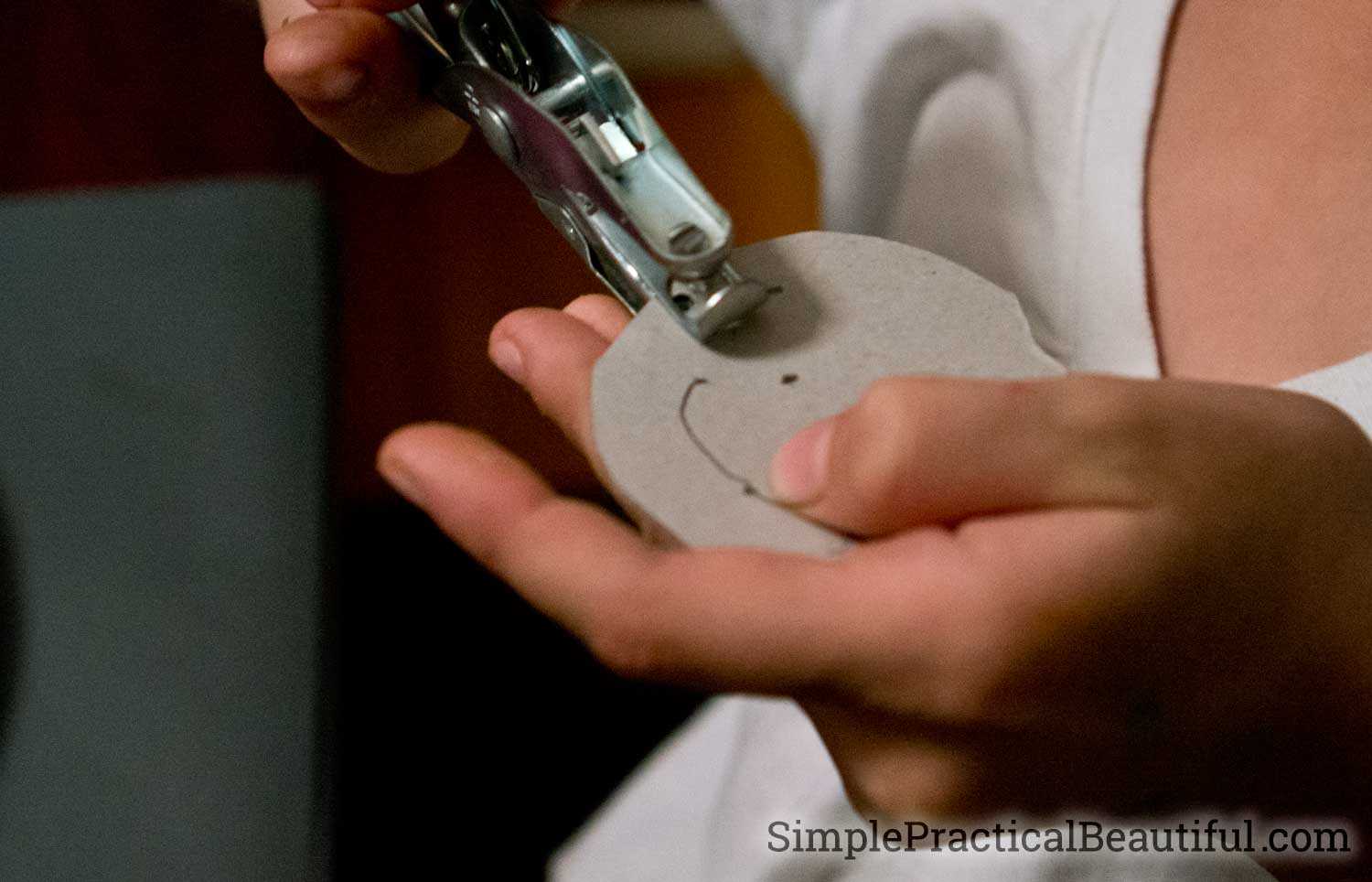 When everyone had finished drawing and punching holes, we turned off the lights and placed one cardboard circle in front of a flashlight. The light shone through the “star” holes and a “constellation” appeared on the wall.

Next, we decorated sugar cookies shaped like stars. This doesn’t have a lot to do with star-gazing, but it was something my daughter really wanted to do at her birthday party. Of course, everyone had fun decorating them and eating frosting. 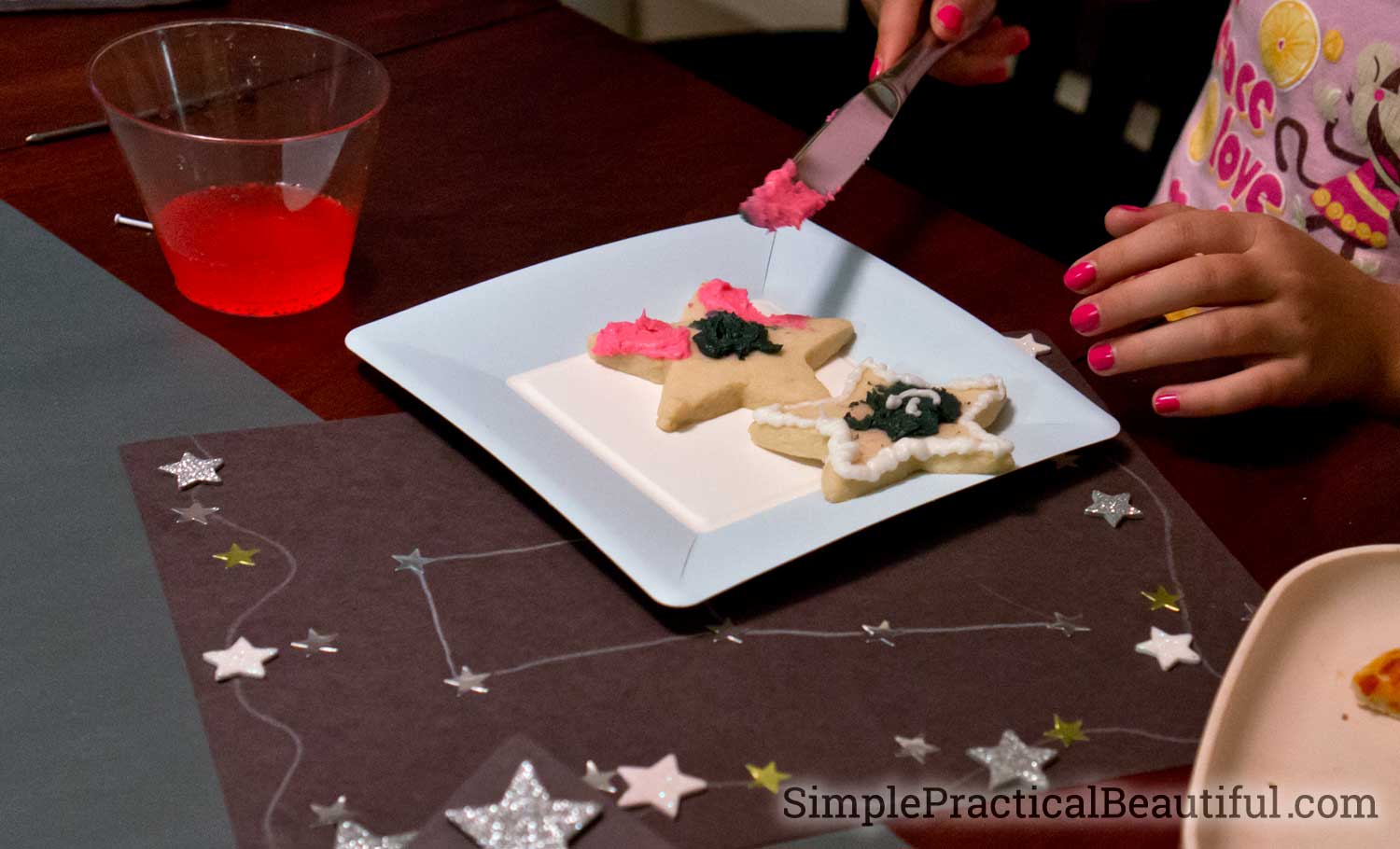 For a star gazing birthday party, we needed a cake that looked good and would get the guests excited about looking at the galaxy. So I made a galaxy birthday cake decorated with buttercream frosting. 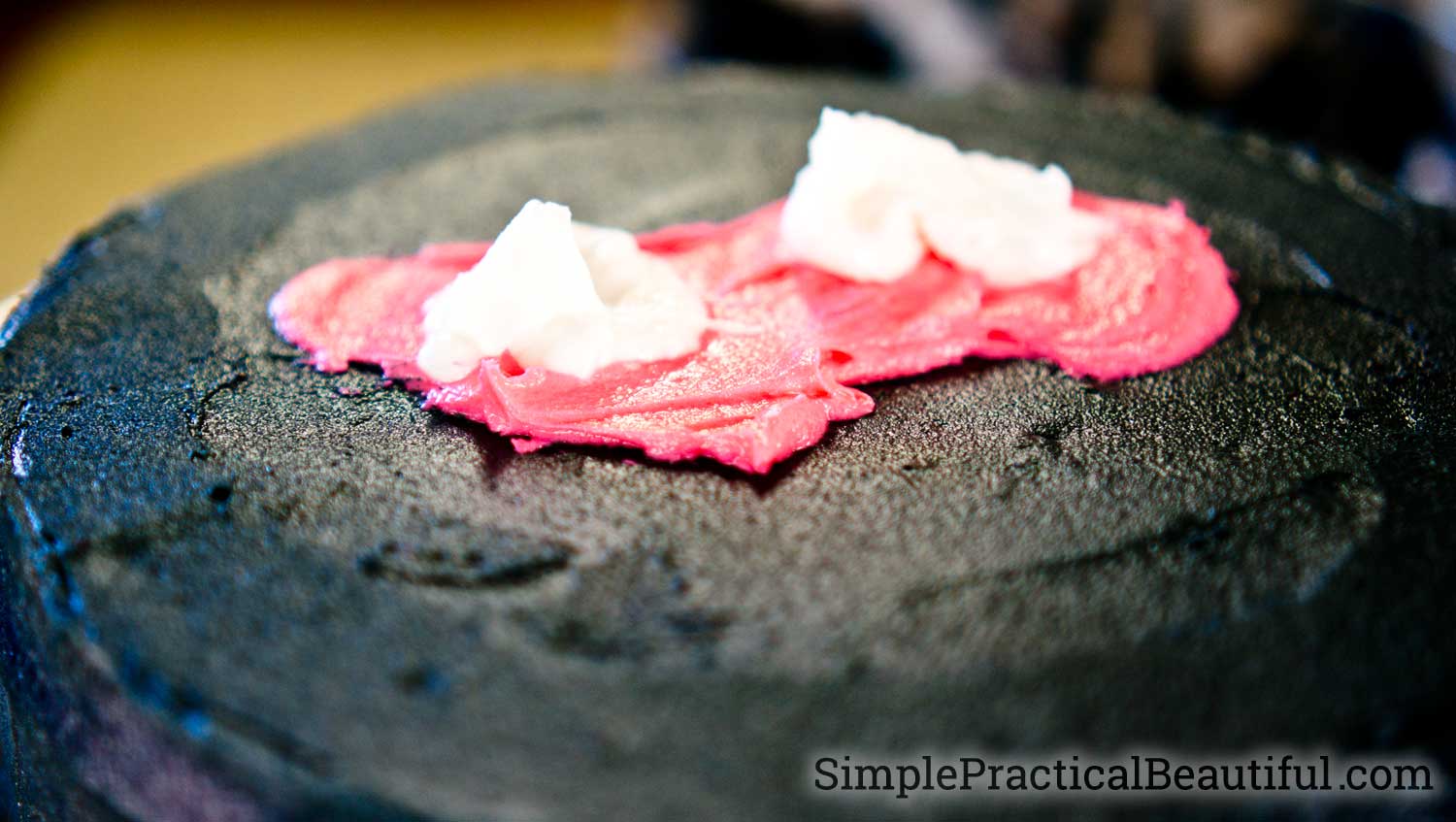 The frosting base is chocolate buttercream with black and blue food coloring. I started with brown, chocolate frosting so I didn’t have to add as much food coloring to make it a dark color. Next, I added a dollop of white and pink frosting on top and smeared them around to look like nebulous. Finally, I used a star tip on an icing bag with white frosting to add stars. And then a small round tip to add even smaller stars. 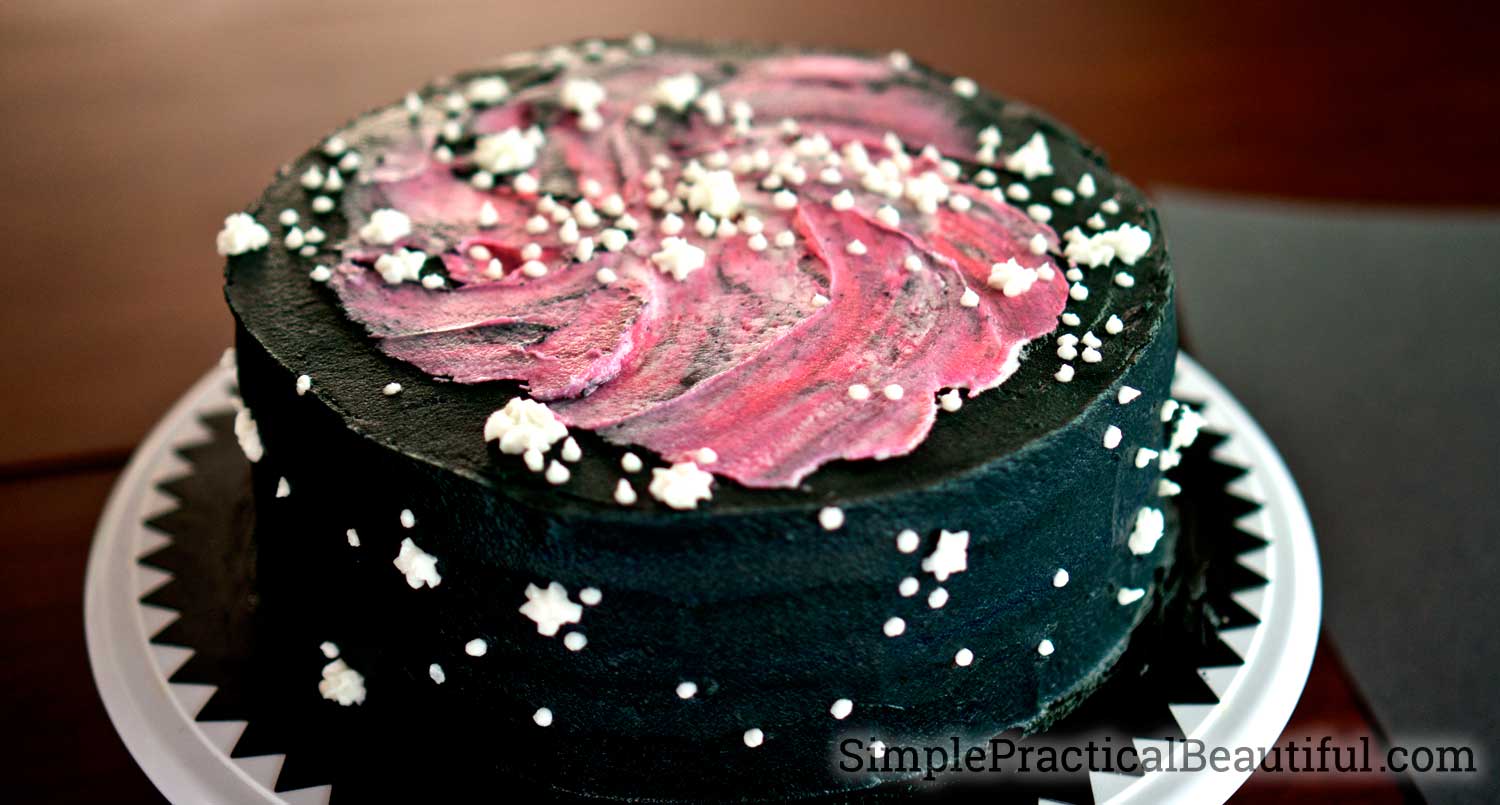 I really liked how the galaxy cake turned out, especially because it is just frosting instead of fondant, which is a lot more work and doesn’t taste as good.

Getting Comfy while Looking at the Stars

Once it was finally dark enough to see the stars well, we headed outside. Before the party, we inflated our kiddie pool and filled it with pillows and blankets. It was such a novel experience for the kids to be comfortably laying down in a pool with no water. I think that was the highlight of the whole party. Just hanging out with friends under the night sky. I took a picture of my kids having fun in the pool earlier in the day. 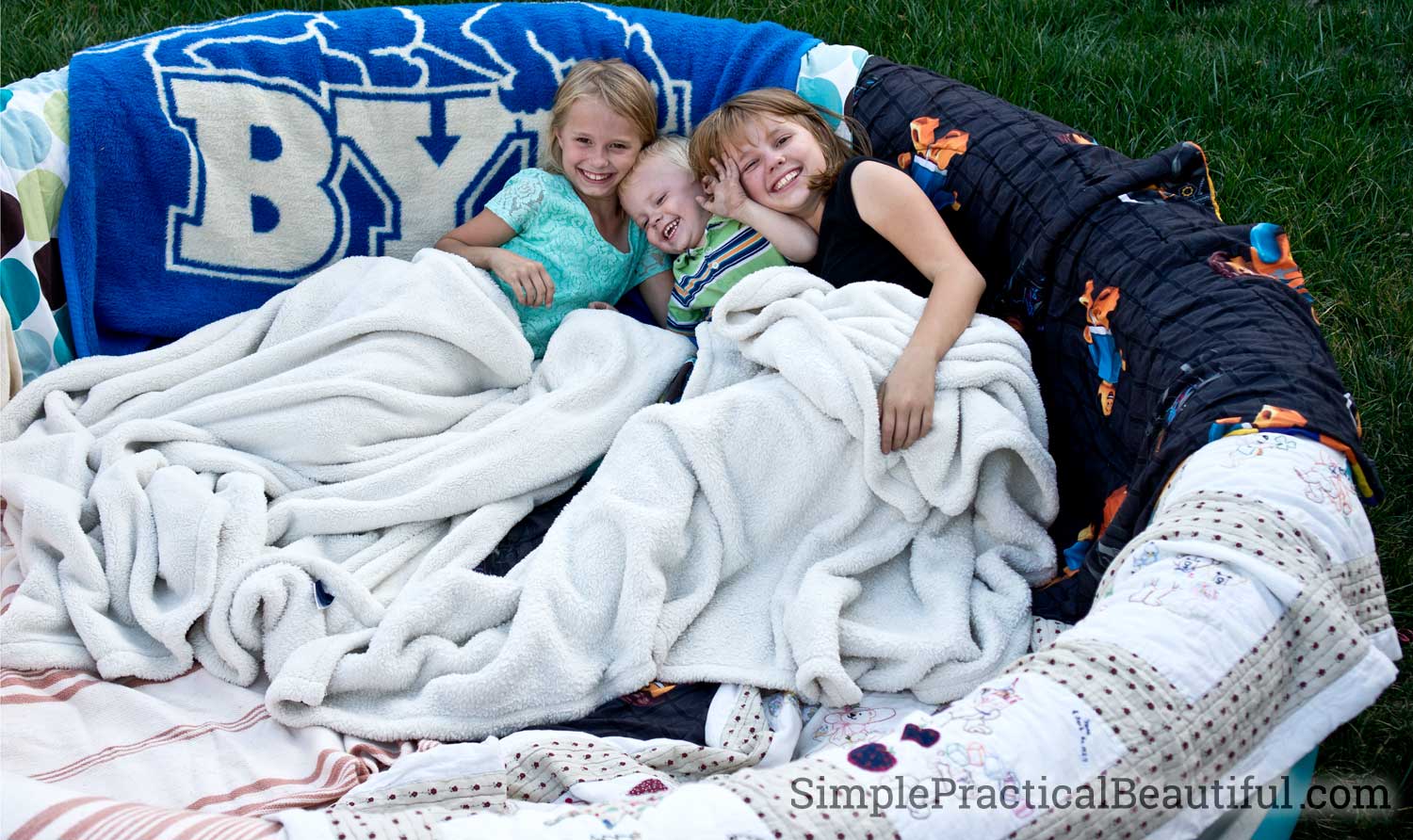 My husband set up his telescope in our backyard facing the clearest part of the sky. It isn’t a very powerful telescope, but all of the kids loved looking at a few stars. 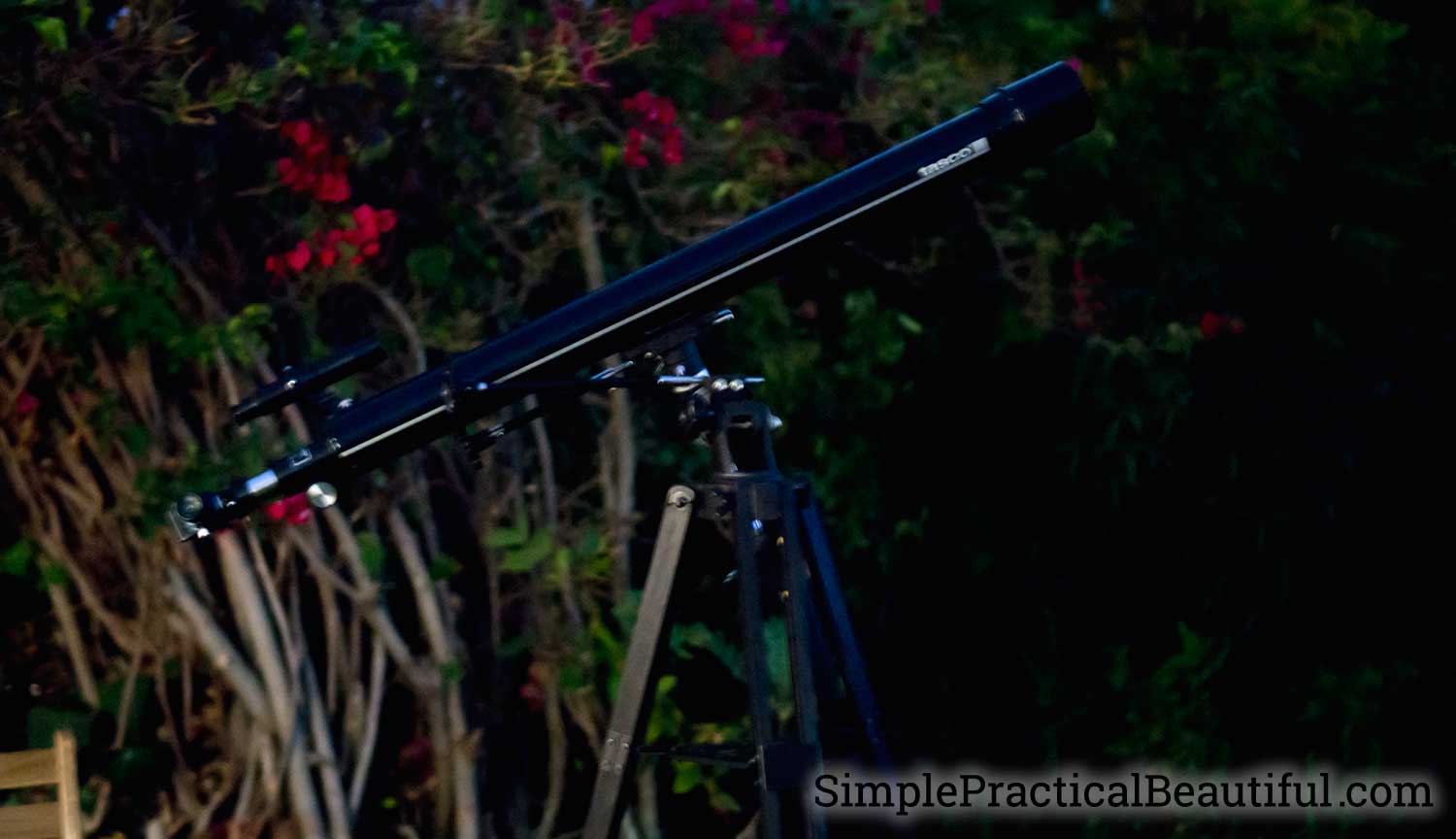 I do wish we’d asked a friend with a more powerful telescope to come and help us star gaze. It’s so much fun to really see a star cluster through a powerful telescope. But our small one was still fun for this star gazing birthday party. 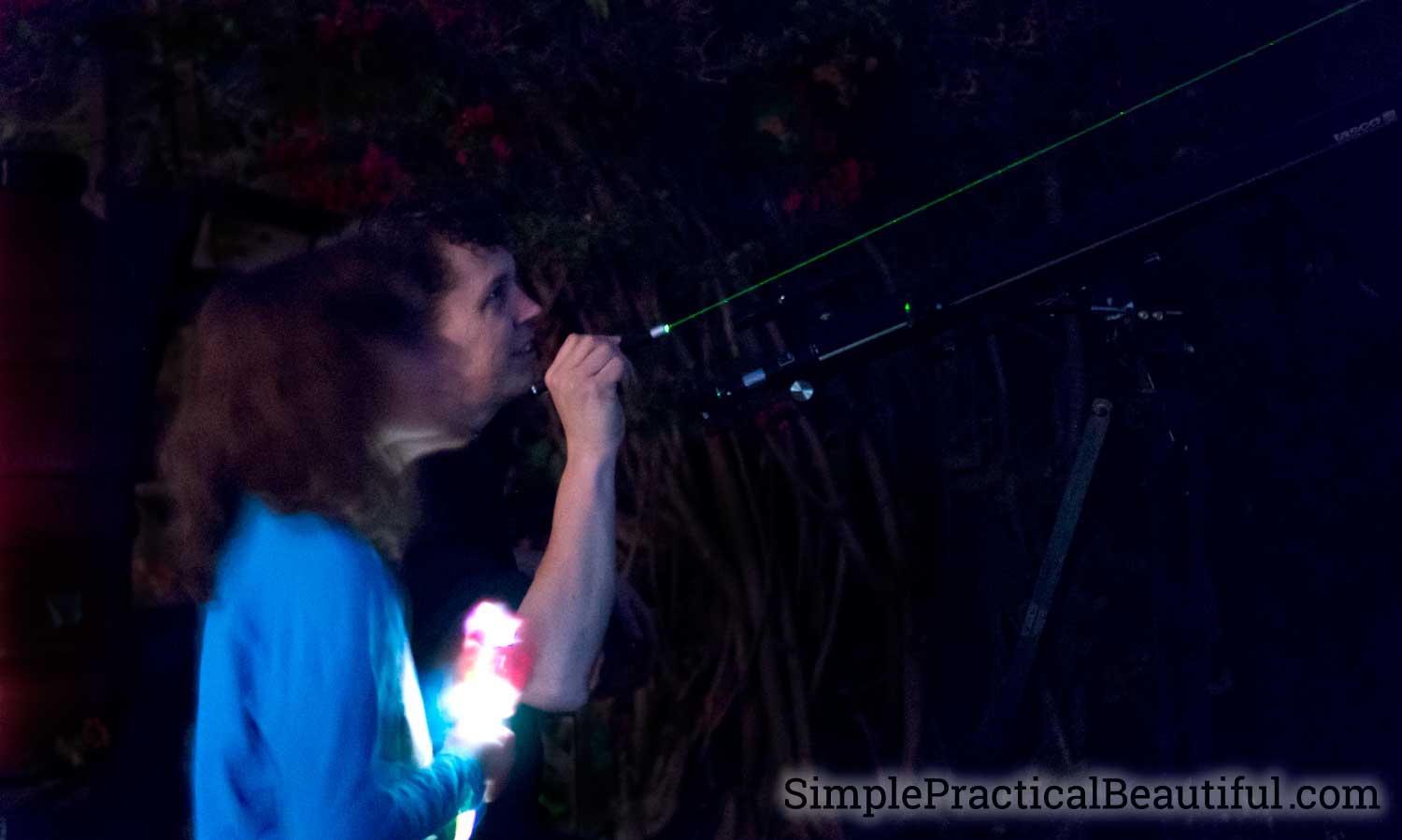 Later, the moon rose, and so we looked at the details of the moon through the telescope. This was actually our best “star-gazing” with a smaller telescope. It was really impressive for all of the kids to see the moon up close. 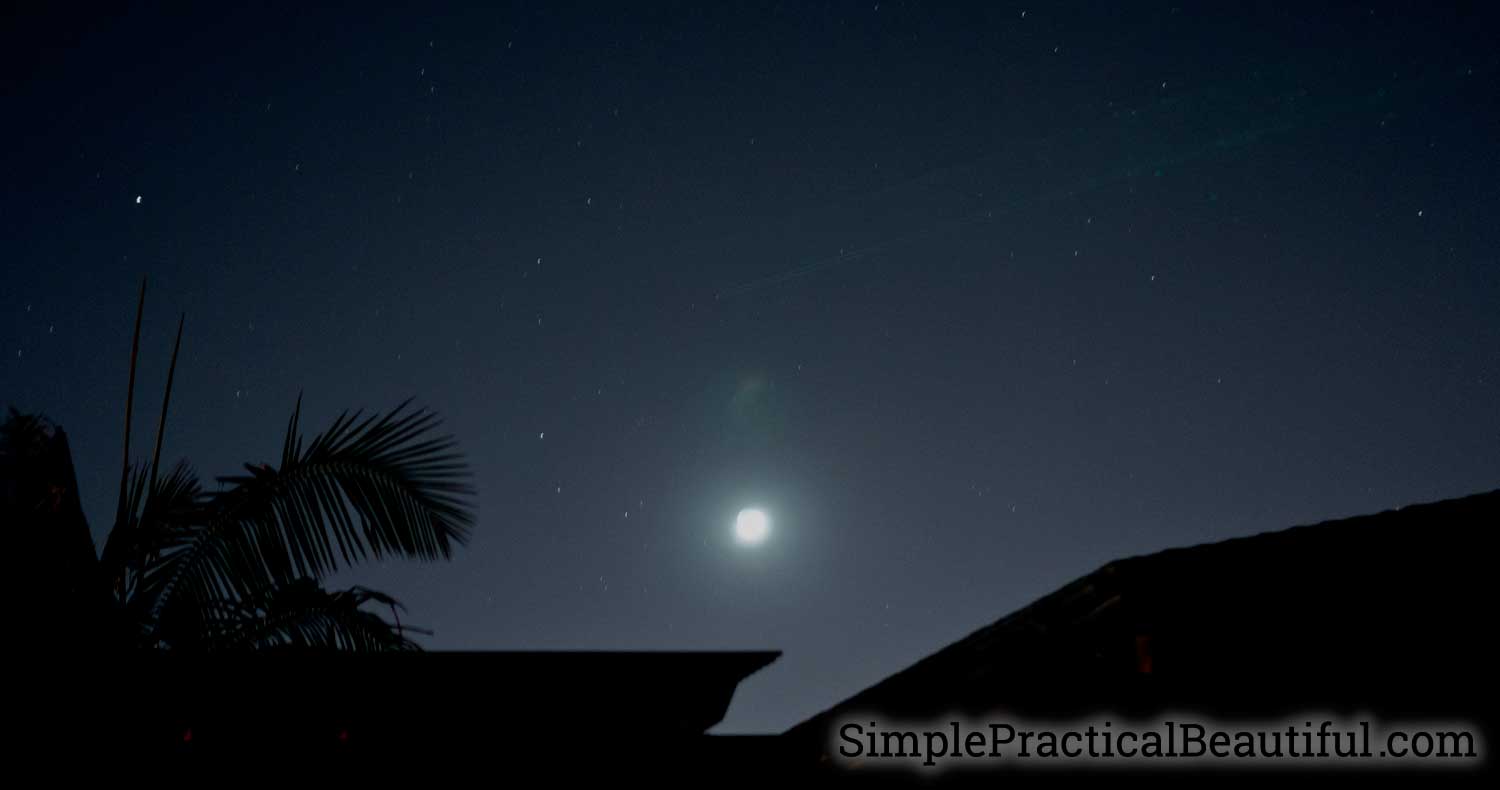 Because only one person can look through the telescope at a time, we need something to entertain everyone else while they waited, so we handed out glow sticks. They don’t give off enough light to interfere with the telescope viewing, but they are a lot of fun to play with in the dark. I got a few fun pictures of the kids waving them around to make cool designs in the night.

We also had a Pinterest fail. I’d read that you could add glow stick juice to bubbles and get glow in the dark bubbles. Nope. It didn’t work. The glow stick juice lit up the bubble container really well, but the bubbles were just normal bubbles that were hard to see at night. Don’t try that one at home. 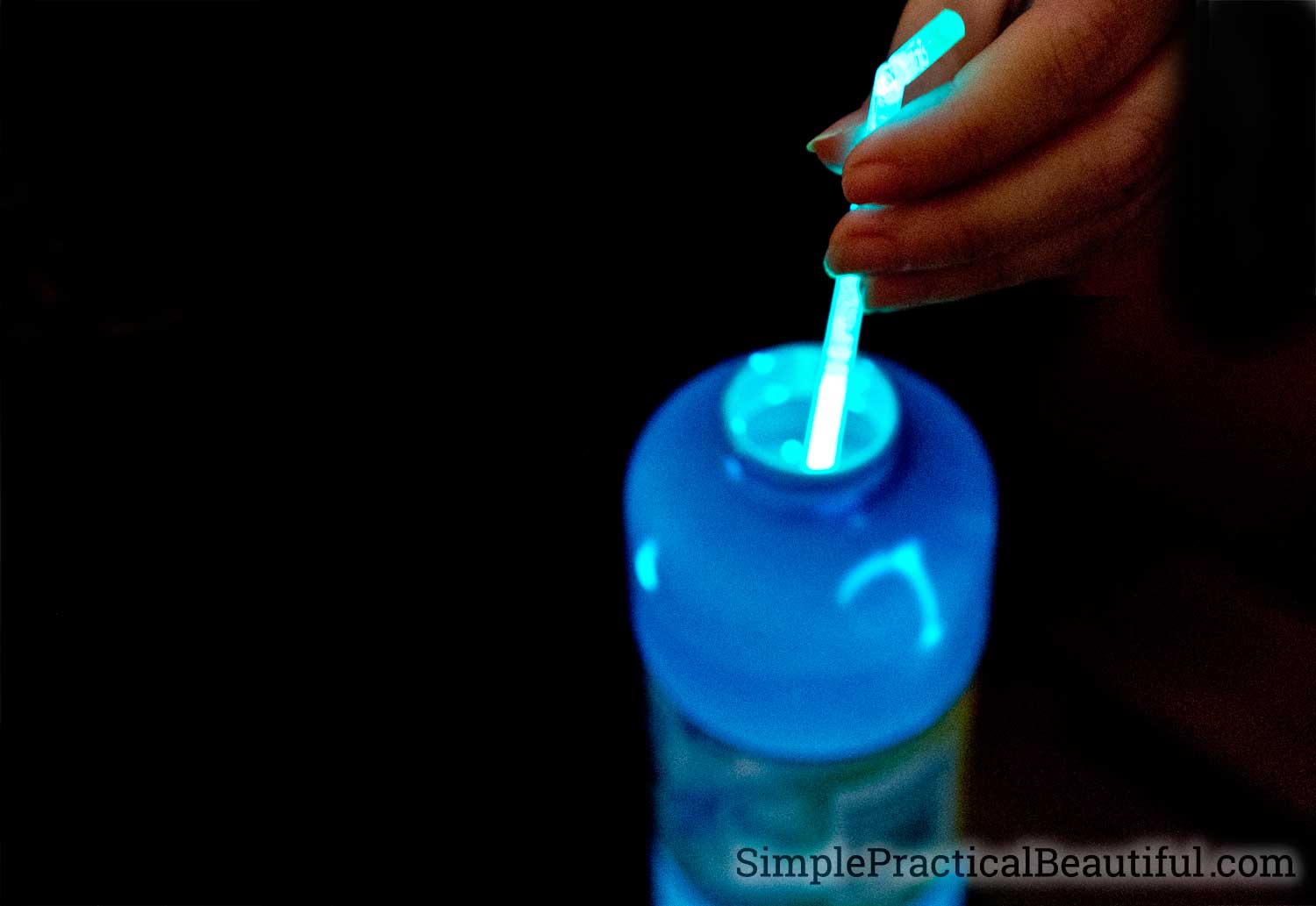 A star gazing party is a fun way to celebrate a birthday. Everyone enjoyed the stars and learned a little more about the night sky. More importantly, everyone, especially the birthday girl, had fun spending time just hanging out with friends under a starry sky.