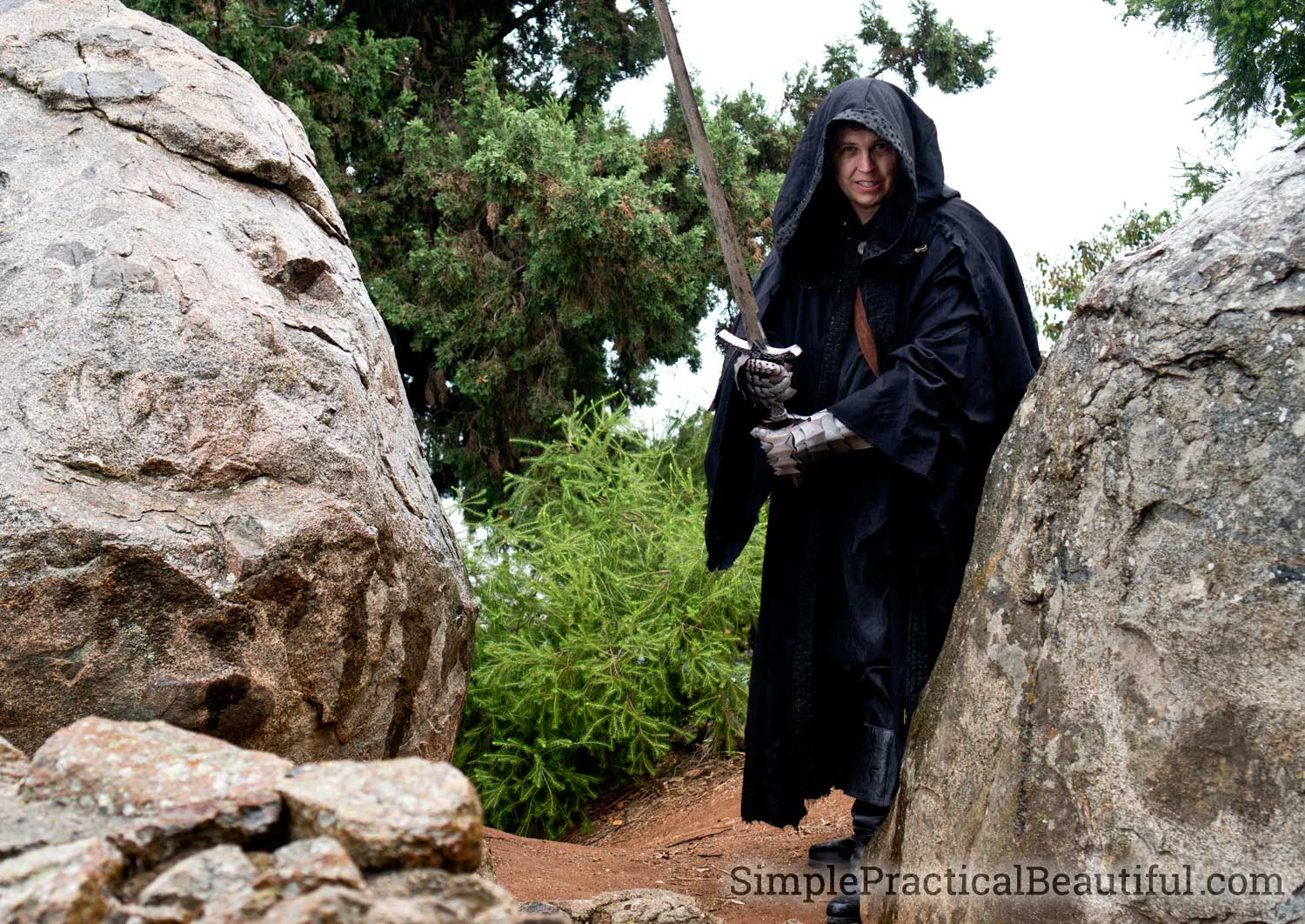 Create a Nazgul costume so you can become one of Sauron’s Ringwraiths this Halloween or at your next cosplay, including the distressed cloak, large sword, and dangerous metal gauntlets. 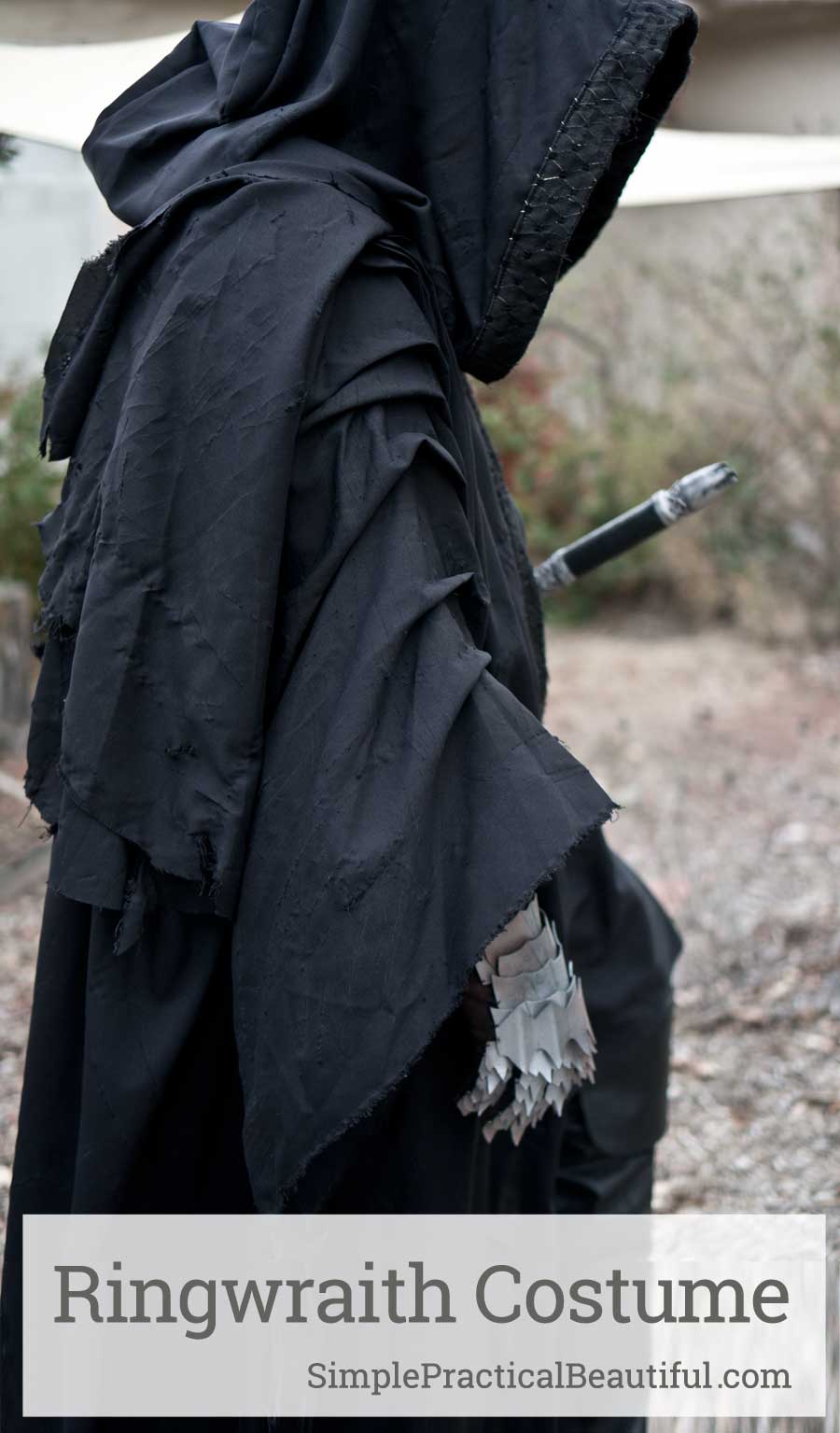 Our family dressed as characters from the movie trilogy The Lord of the Rings. My daughters and I were a little limited on choice, and my toddler had to be a hobbit, obviously. But my husband had many awesome characters from which to choose. And it was a hard choice. He loves the character of Aragon, who doesn’t. But he decided the costume he really wanted to make and wear was a Nazgul. It’s ironic that I dressed as Eowyn.

The Nazgul were ancient human kings who became servants to the Dark Lord Sauron. They help him to track down the ring of power and occasionally ride a dragon-like fell beast. They are also called Ringwraiths, Black Riders, the Nine Riders, Nunbolg, or Ulairi. Their leader is the Witch King.

Take a look at the video we made about how to make the Nazgul gloves that includes our own remake of a scene from Fellowship of the Ring. 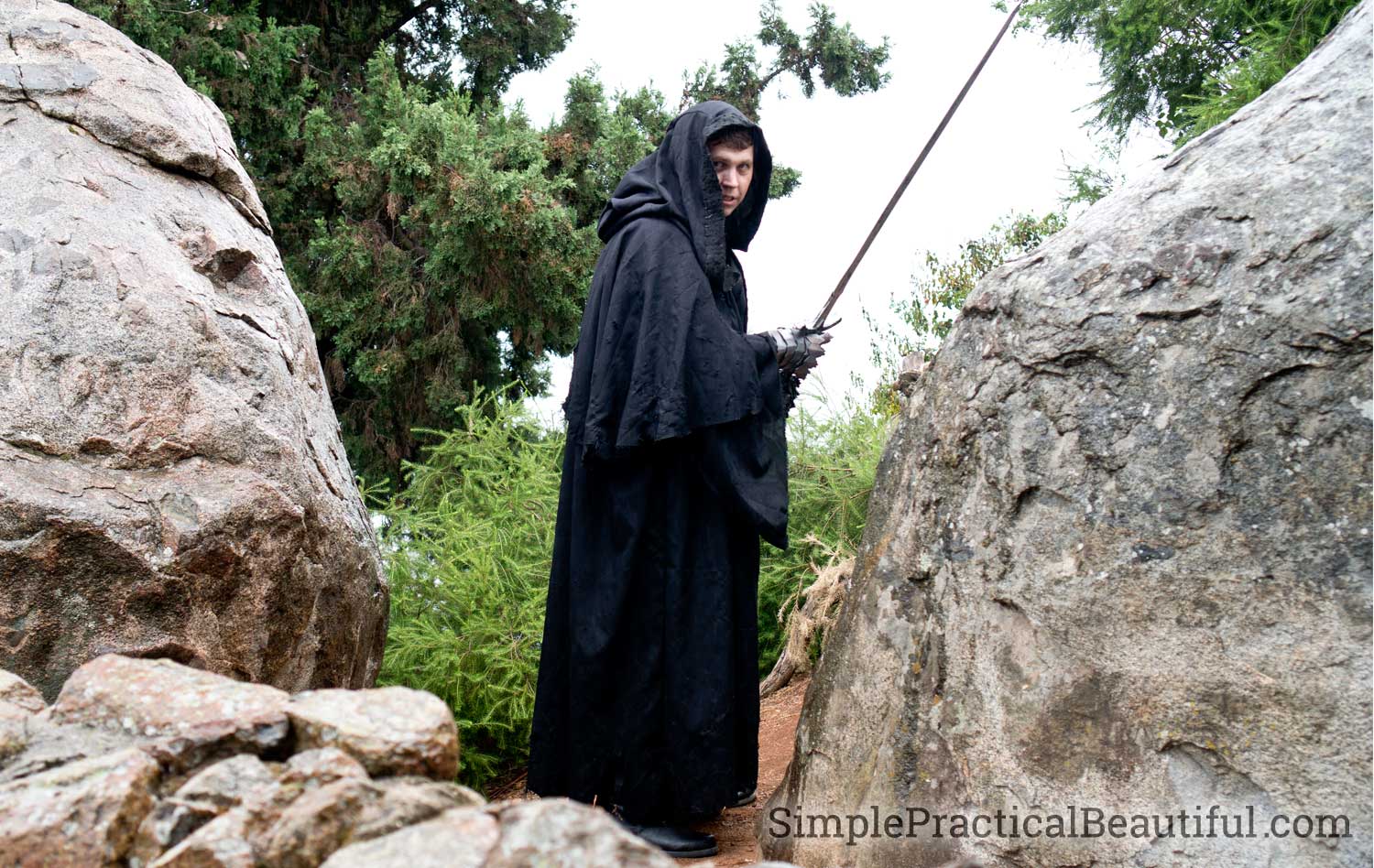 I bought 6 yards of black polyester fabric to make the Nazgul cloak. I would have loved to use silk and linen like they did in the movies, but I’m on a budget. So polyester. It didn’t look as cool, but it did look good.

I used 4 yards to make the front and back of a cloak. I kind of made of the pattern, but basically just folded it in half and in half again.  Then drew a chalk line curve on the bottom and chalk line side tapering in going up. Once that was cut, Also cut along one of the folds going up so the front would open in the center. 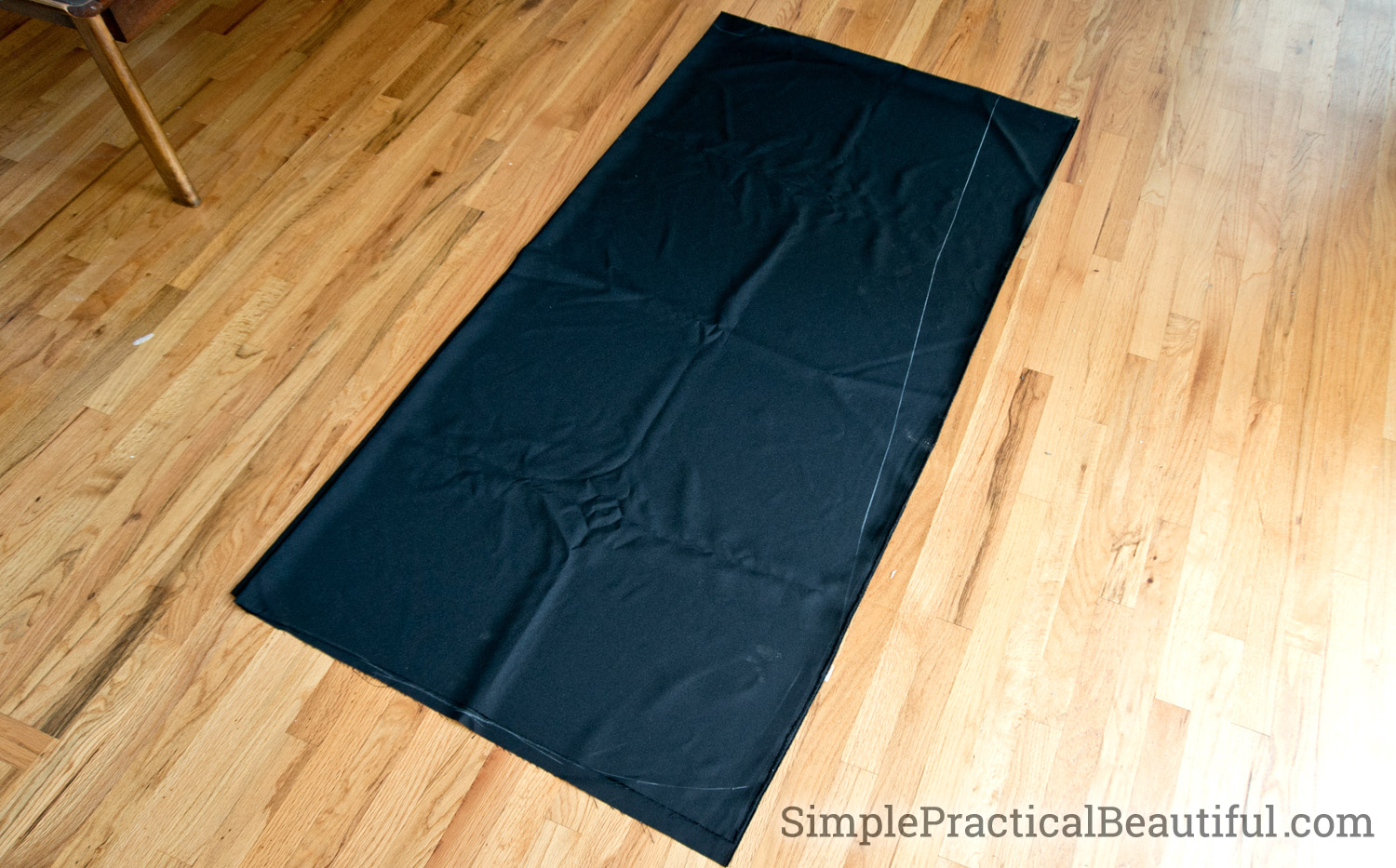 Here you can see all of the pieces to the cloak. The rectangle is the front and back I described. The half-circular piece, folded in half, is a small cape that goes over the cloak to give another layer around the shoulders. The odd trapezoid shape is the sleeves. The small end connects to the cloak, the curved parts get sewn together, and the large end is the sleeve opening. And finally, the square pieces, actually a rectangle folded in half, is the hood (sorry, part of a chair is in front of it). It gets sewn together on one side and then gathered and sewn to the cloak. There will be a point in the back of the hood, but that’s part of the Nazgul costume. 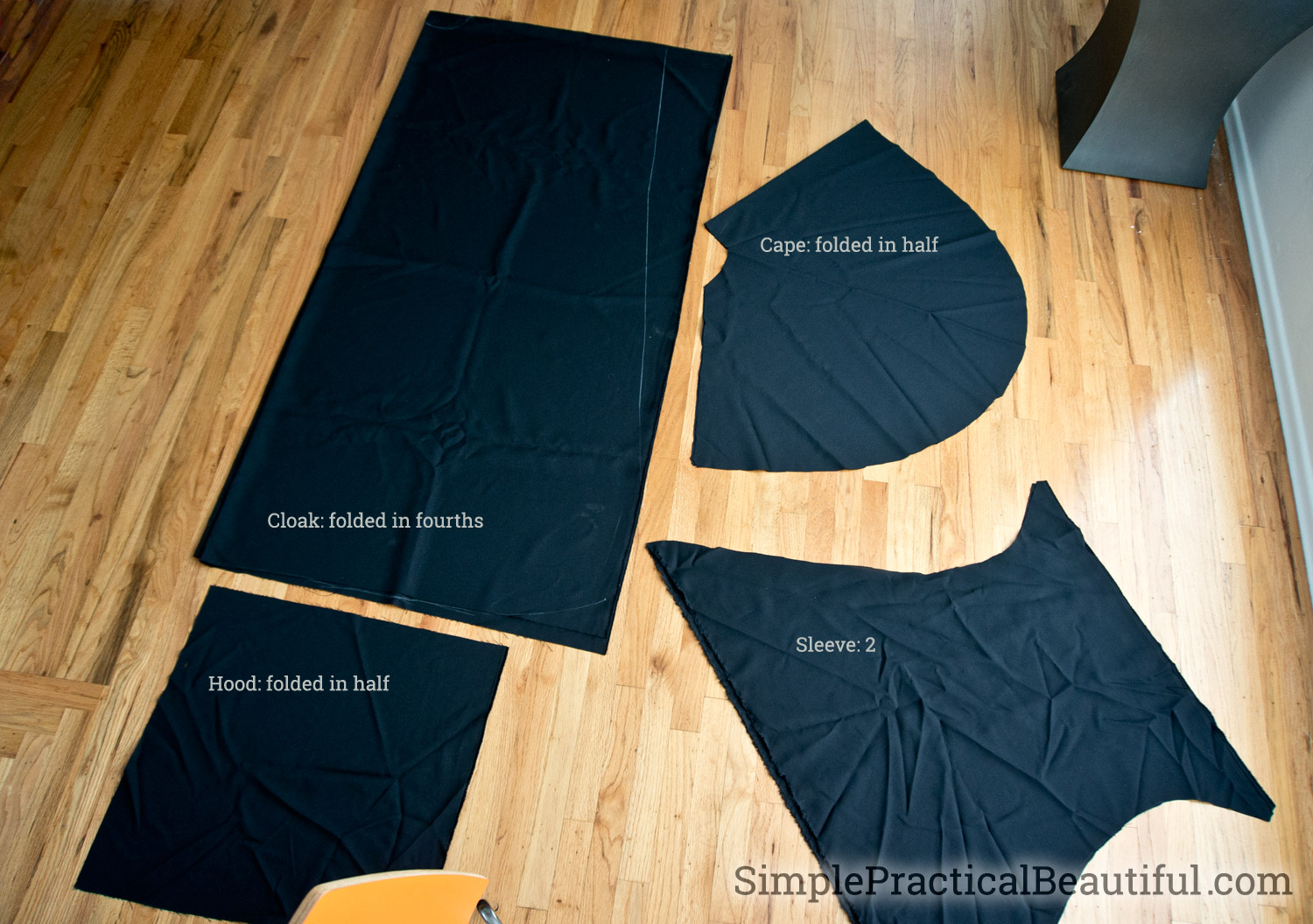 Once all of those parts were sewn together, I gathered the fabric on the shoulders so that the seam where the sleeve meets the cloak was exactly at my husband’s shoulder. I tacked that gather into place. Then gather up the sleeve so that it came to his wrist. I pinned those gather, then sewed a few stitches inside each fold, just on the top of the sleeve, to keep them in place. That way, the bottom of the sleeve still hung down long, but the gauntlet could be seen. 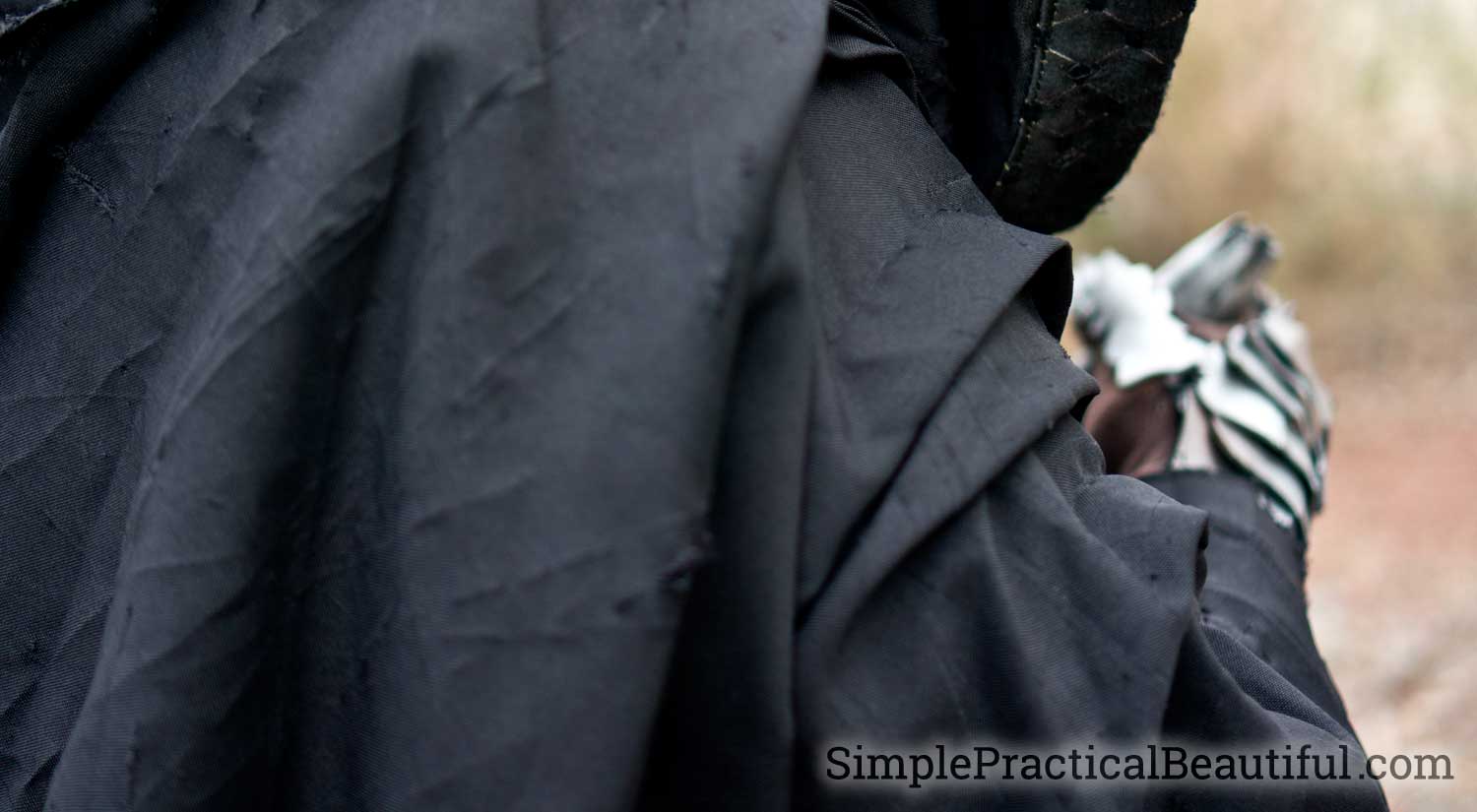 I finished the cloak by adding a thick upholstery fabric around the hood and a button to keep the cloak closed. The upholstery fabric keeps the hood open in front even though it’s still in front of his face. For the movie costumes, they actually made a metal rigging that went over the back and shoulders and around the face. This way, the front of the hood stayed open without a head to keep it in place. And it gave an inhuman look to the whole costume. We didn’t make one of those. 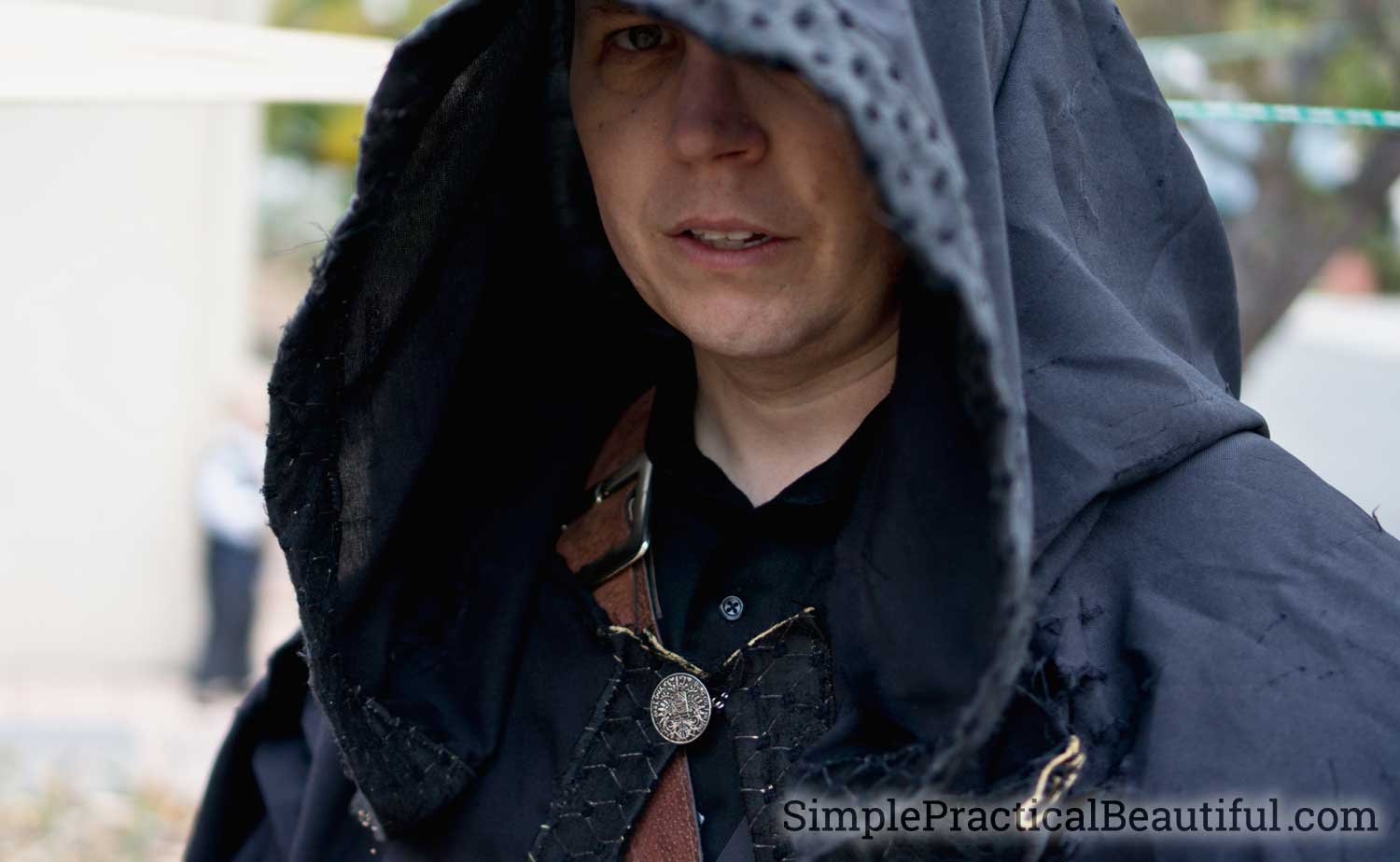 The background of a Nazgul is that they are human kings who became servants to Sauron and have served him for centuries. So the costume needed to look aged and battle-worn. It’s easier to do that with natural fibers, but even budget-conscious polyester can be distressed. 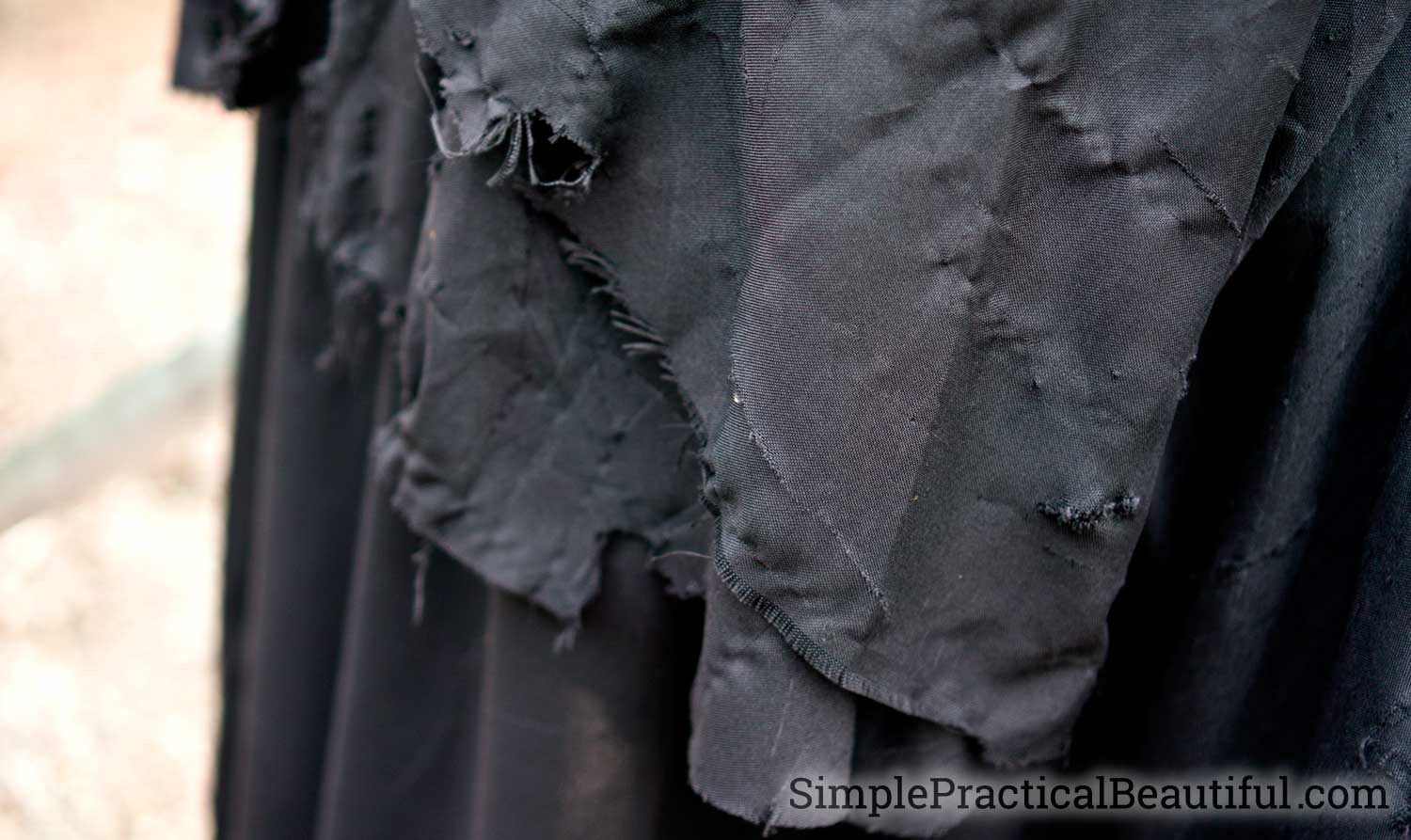 First, my husband hammered two nails through the end of a board and scraped that across the fabric, snagging it, stretching it, and puncturing it. Then, he went over the fabric a wire brush drill attachment. That actually polished some of the areas and snagged others. Finally, he used a wood file by draping the fabric over wood, then filing along the edge of the wood. This made some larger holes and runs. With all of this distressing, he did more along the edges and less toward the middle because clothes get more worn along the edge that near your torso. Especially if you ride a horse. Or a fell beast. 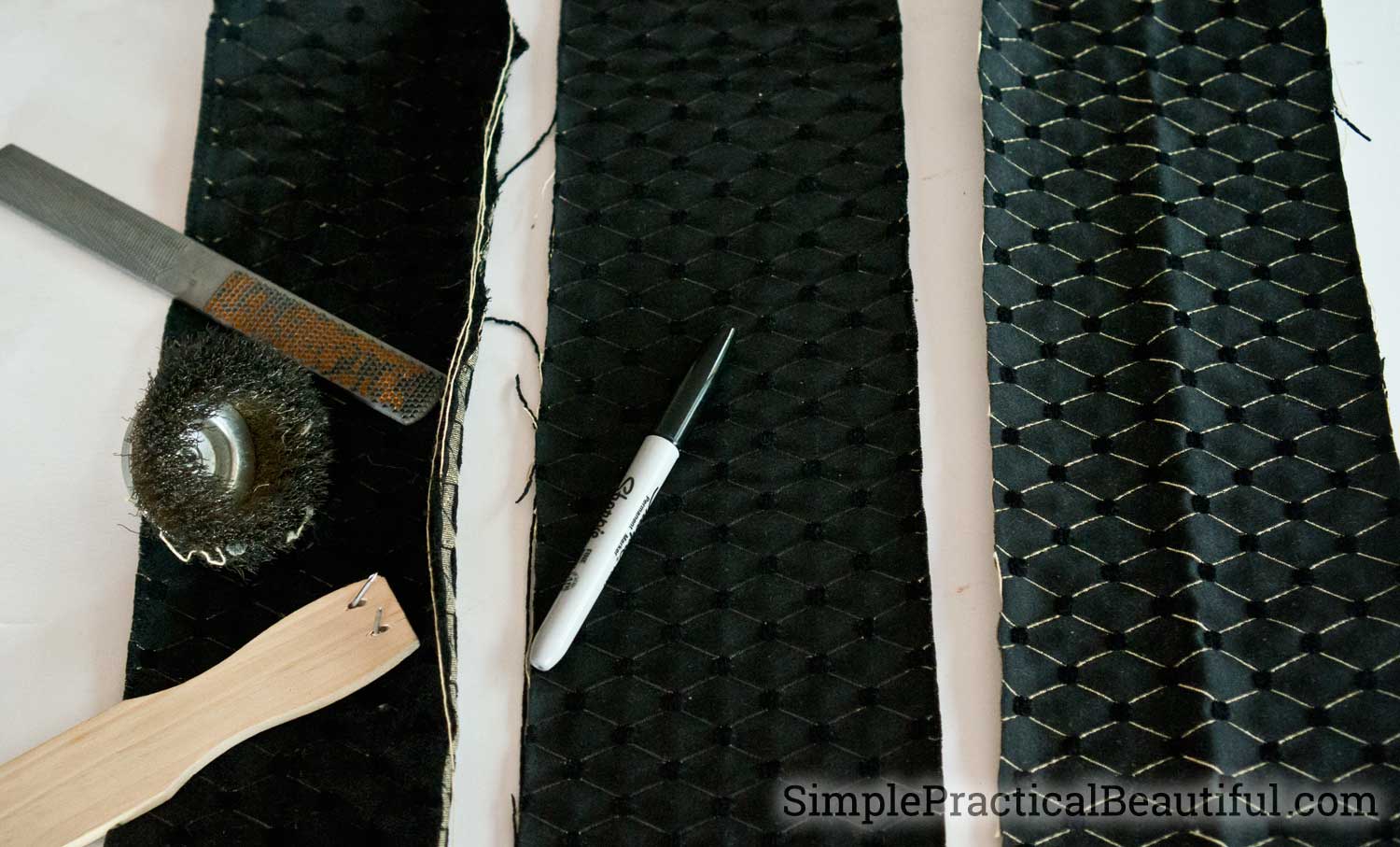 He also used a Sharpie permanent marker to dye anything colored into black. You can see the difference between the fabric on the right and the blackened fabric in the middle.

This part is less about Nazgul and more about men’s costume. If you are a man who often wears costumes or have a wife that wants you to wear costumes, you need to buy a good pair of black boots. The first time we dressed up for Halloween as a couple, we made boot tops out of black vinyl for his pirate costume. They looked terrible. That Christmas, he got a pair of knee-high black boots. Actually, if he unfolds them all the way, they are thigh-high. He has worn them with almost every costume he has worn since then. Okay, maybe not the muppet costume. But so many costumes. Pirate, prince, monster hunter, and now Nazgul. And those boots make every costume look better. Definitely worth the cost.Here are some similar mens boots on Amazon. 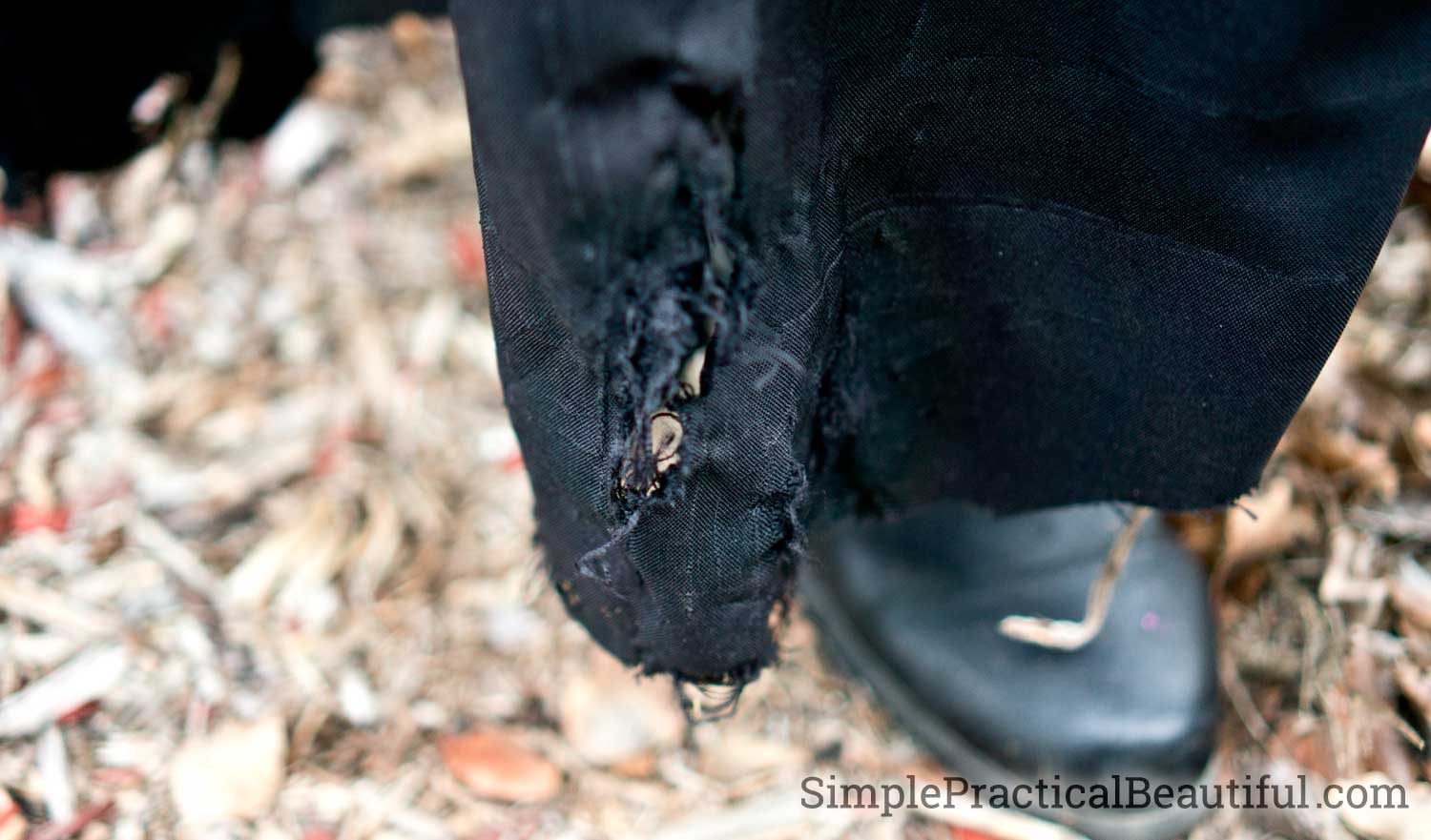 The Nazgul sword my husband made is actually wood. It looks metal. It looks battle-worn. It’s taller than my son. And it’s actually a piece of wood. You need to read the full Nazgul Sword post if you want to see how he made it. Everyone that sees that sword in real-life wants to hold it. And swing it around. And stab something. It’s awesome.

The gloves or gauntlets are actually made out of foam and painted to look like metal. Again, you’ll have to read the whole Nazgul Gauntlets posts to see how he made them. I think foam is his favorite material right now. It’s easy to work with. You can create anything with it. Plus it’s not uncomfortable to wear. I can’t imagine wearing those gauntlet made out of metal. Ouch. 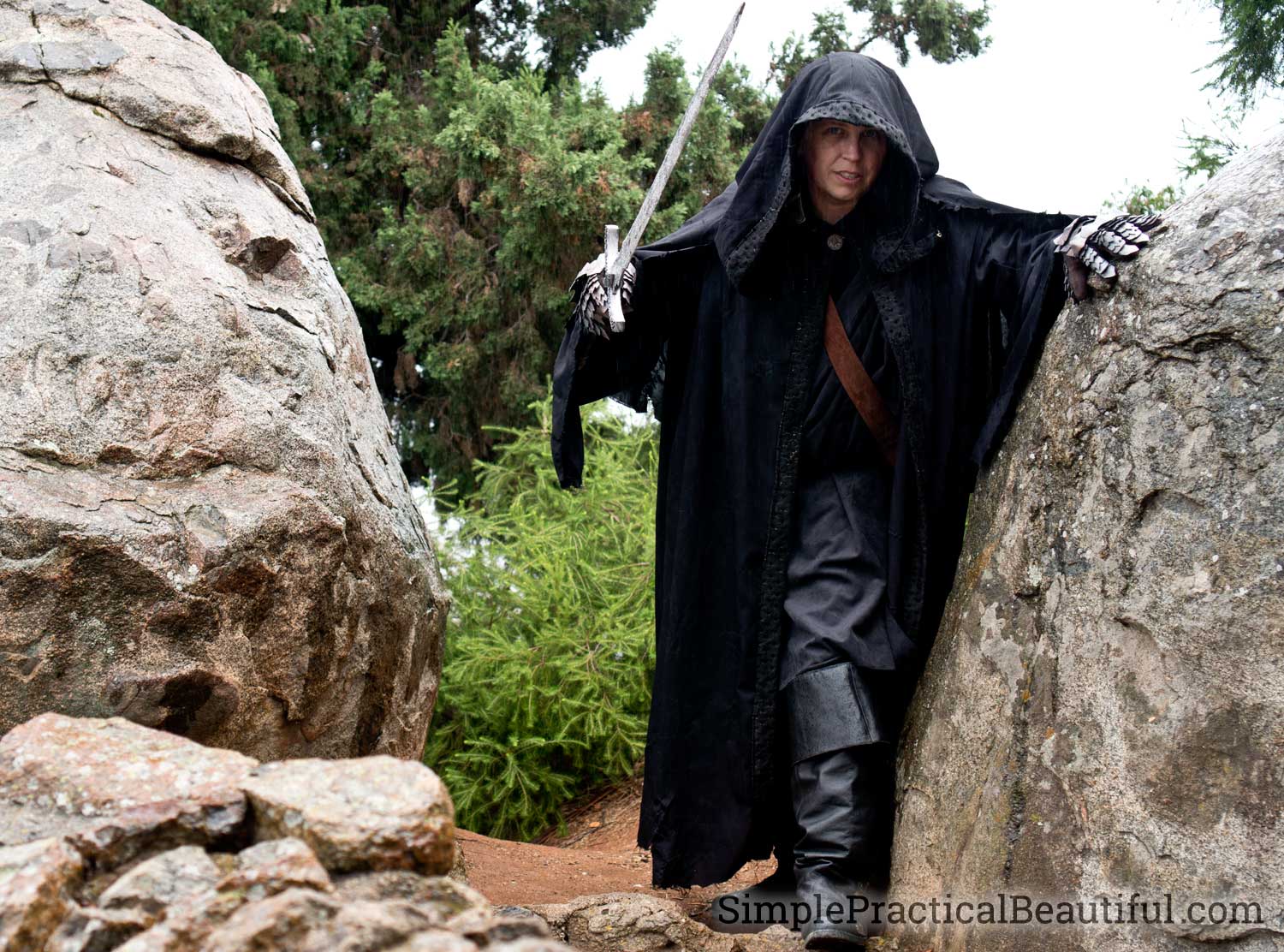 Also, my husband researched a lot about making the Witch King’s mask but decided it wasn’t worth the effort. Ironically, we don’t use masks very much for Halloween. They are hard to see out of when it’s dark on Halloween night, which is really bad when trying to keep a 3-year-old out of the street. And they don’t get worn much at parties. One party we attend even asks that we not wear masks at all.

Don’t forget to check out all of our costumes from The Lord of the Rings, especially how to make the Nazgul Gauntlets and Nazgul Sword. In my post on Frodo’s costume, I even shared some of the movie scenes that we recreated. So much fun. Happy Costuming! 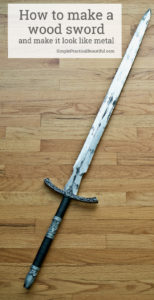 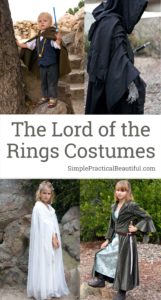 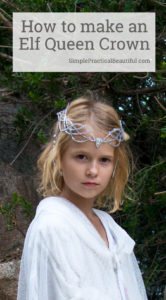 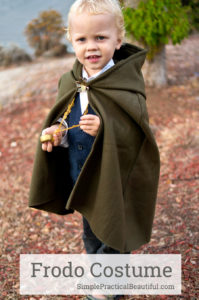 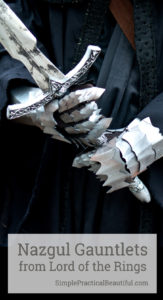