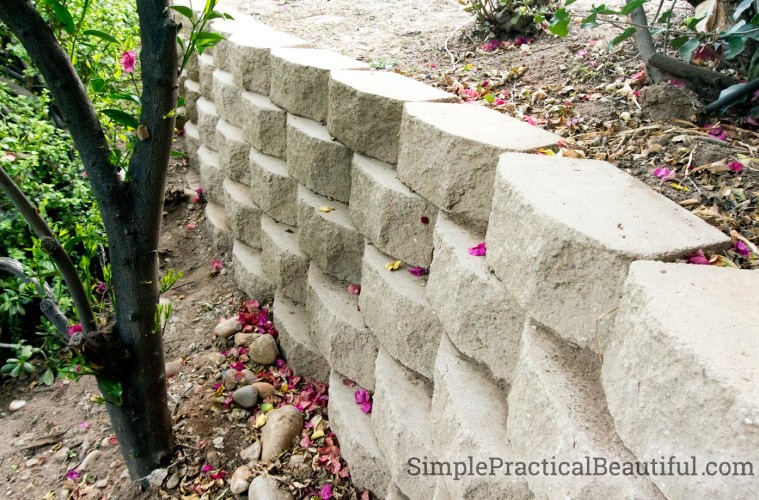 Retaining Wall on a Slope

We built a retaining wall on the slope behind our house to give us more usable space, and it opened up our backyard and gave us a lot more room. 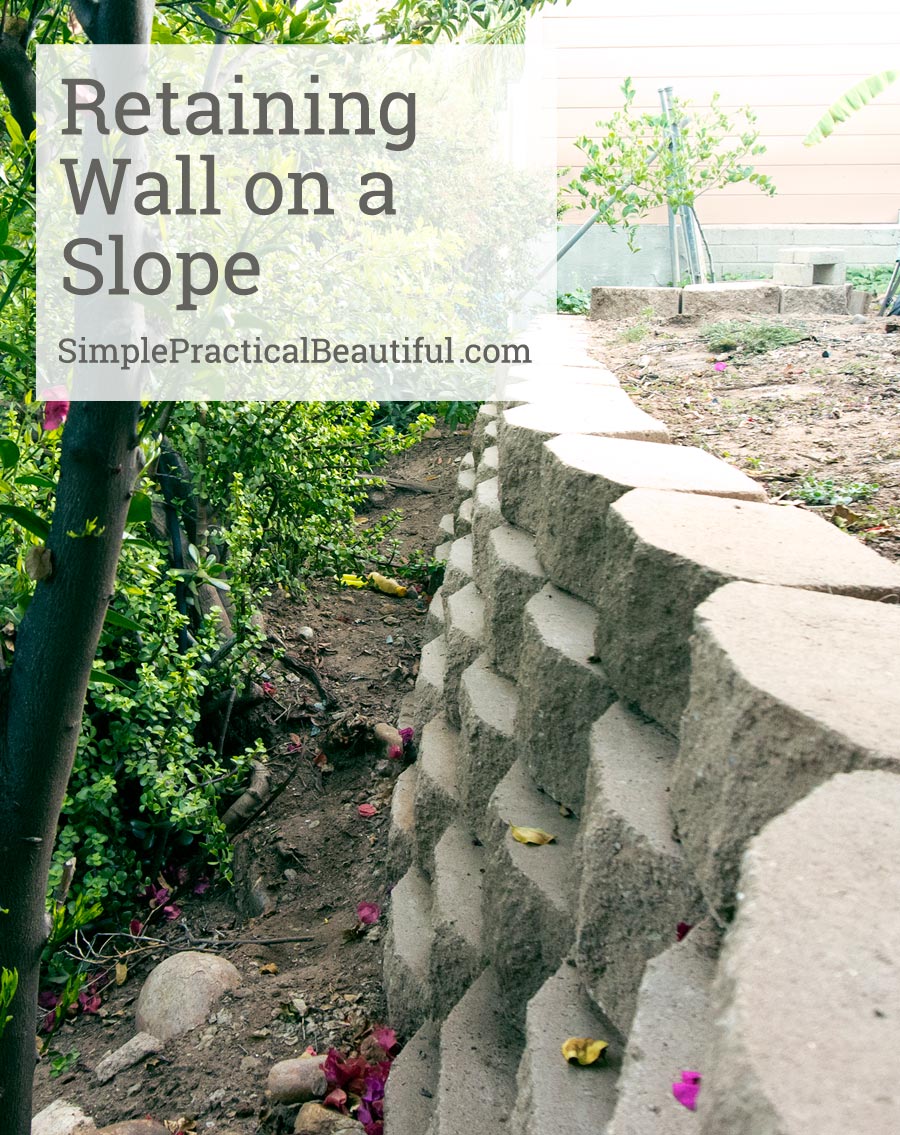 Half of our backyard is a steep slope. Dividing the flat, usable part from the slope used to be a chain link fence that was falling down and a deteriorating garden box. Both had to go, and we knew we needed some kind of retaining wall to keep the flat dirt from sliding down the slope. My brilliant husband realized that if we built the retaining wall part way down the slope, we could increase our usable yard by a few feet. 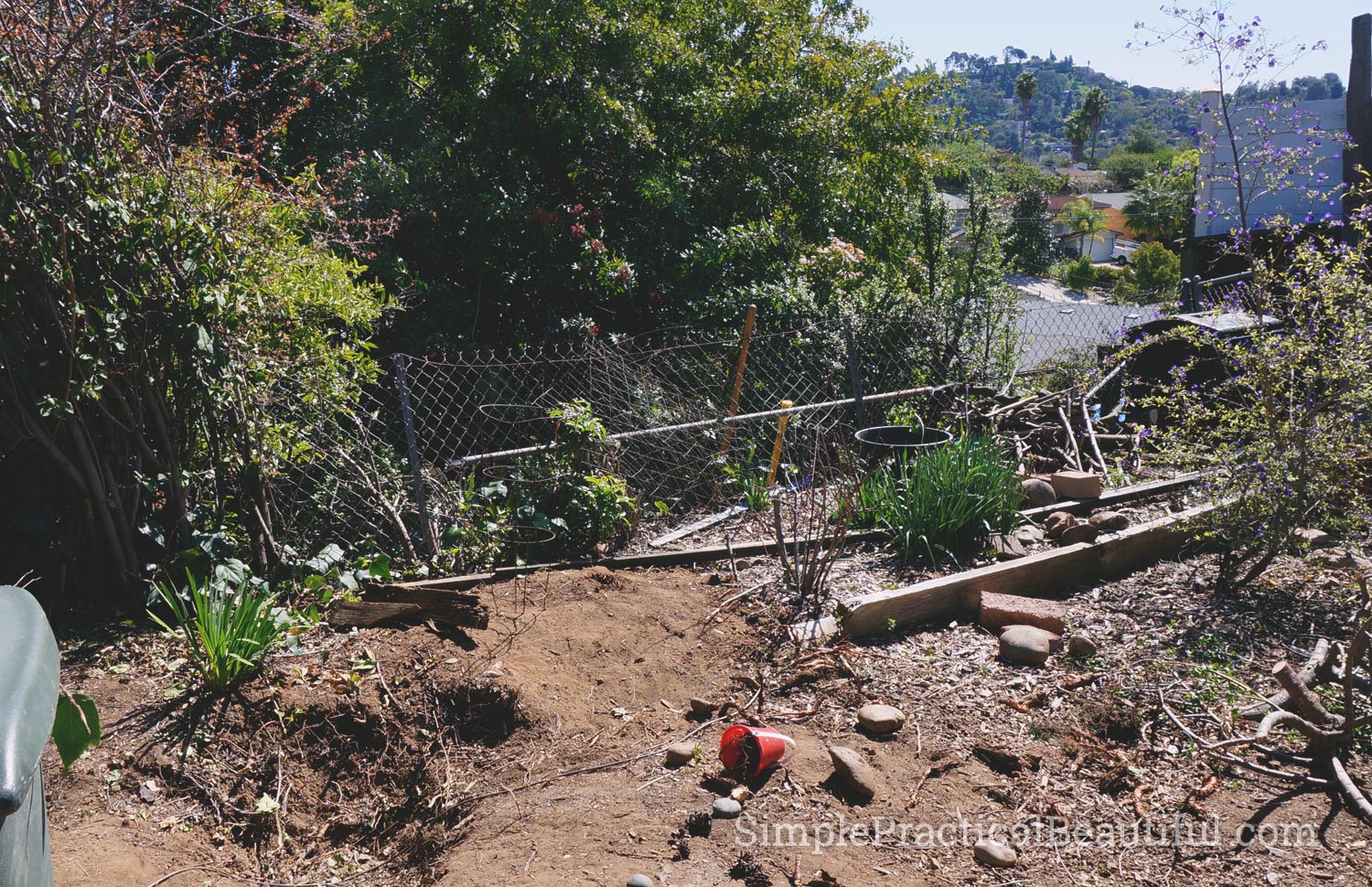 Our backyard before. What a mess.

We watched lots of YouTube videos on how to build a retaining wall. Home depot has a good one that makes it seem very simple. I suppose if you are building a little circle wall like they did, it is pretty easy. We never found a video specifically about building a wall in the middle of a steep slope, but we watched and read enough that we felt confident we could do this. And we did, it just took a long time. 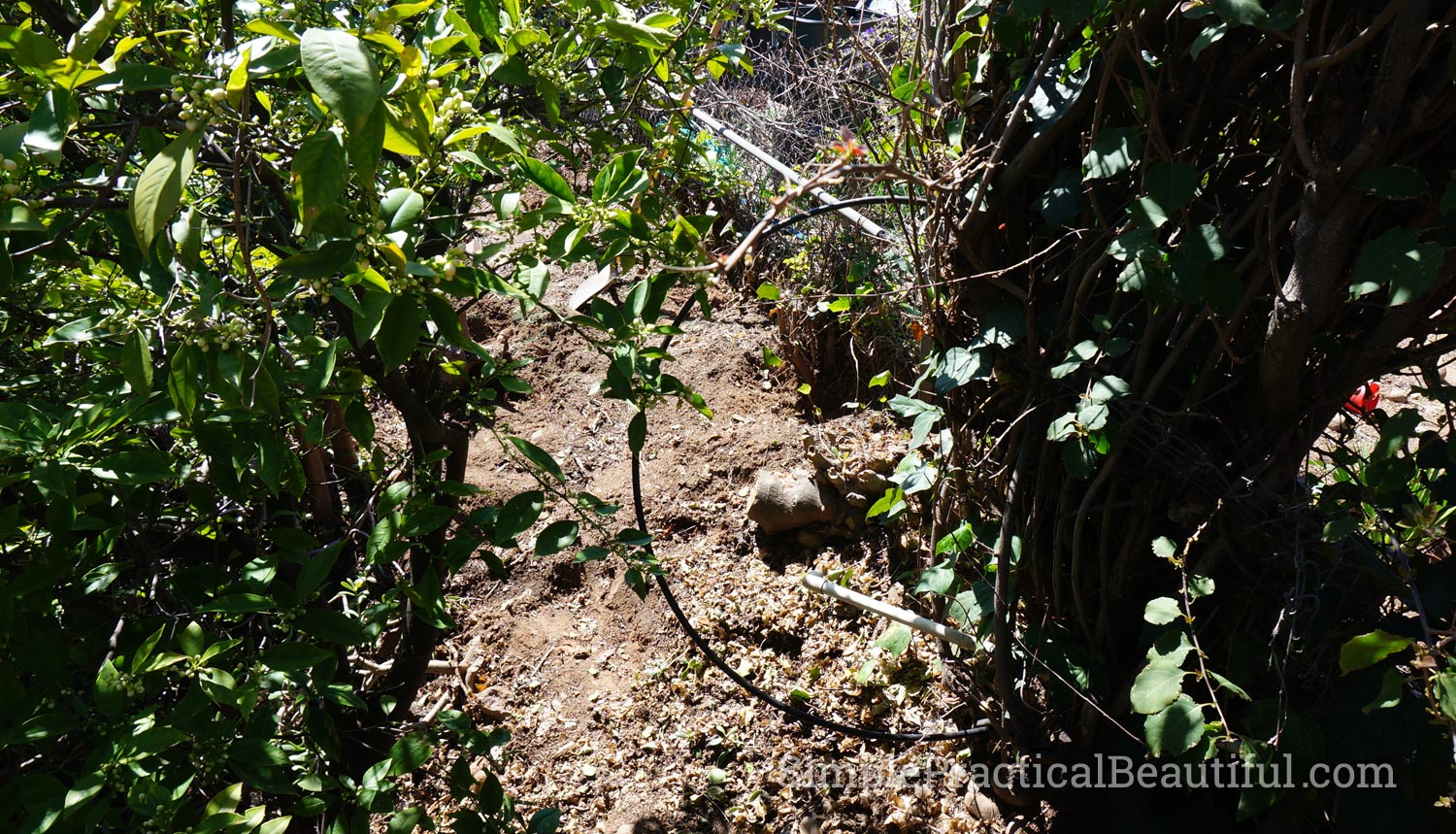 The slope before with lots of overgrown plants and a falling-down fence.

There was also the added difficulty that the slope is not even. The north side of the slope (by the deck) is much steeper that the south side, which meant that the north side would need a taller wall. So we planned a wall that was 3 feet high on the north end, gradually getting smaller to about a foot and a half on the south end. Not too difficult, it just took a little more planning and some extra math figuring out how many bricks to buy. 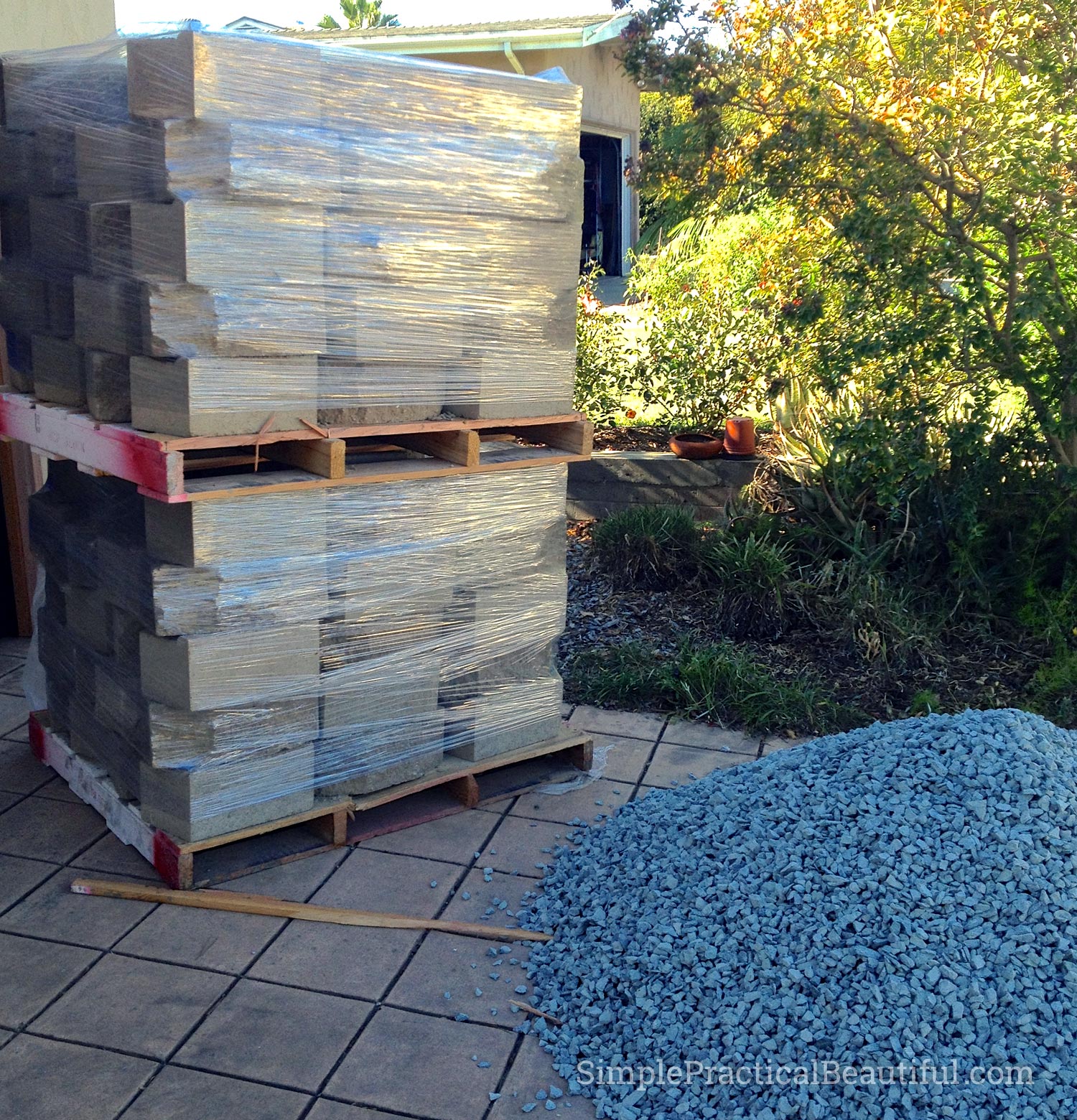 That’s a lot of bricks on our driveway.

We bought 2 pallets of 16-inch interlocking bricks and  a yard of gravel and brick sand. Interlocking bricks don’t  need mortar because the small lip on the bottom-back of the brick holds them in place. We also bought a 16 foot french drain pipe and ends and a cover for it. And we ended up getting some landscaping cloth too.

After taking out the old chain link fence and garden box, we had to clear away the over-grown plants that were growing where the wall was going to be. That meant cutting back branches and pulling out roots and several stumps. It gave us a nice wide strip to start the wall. 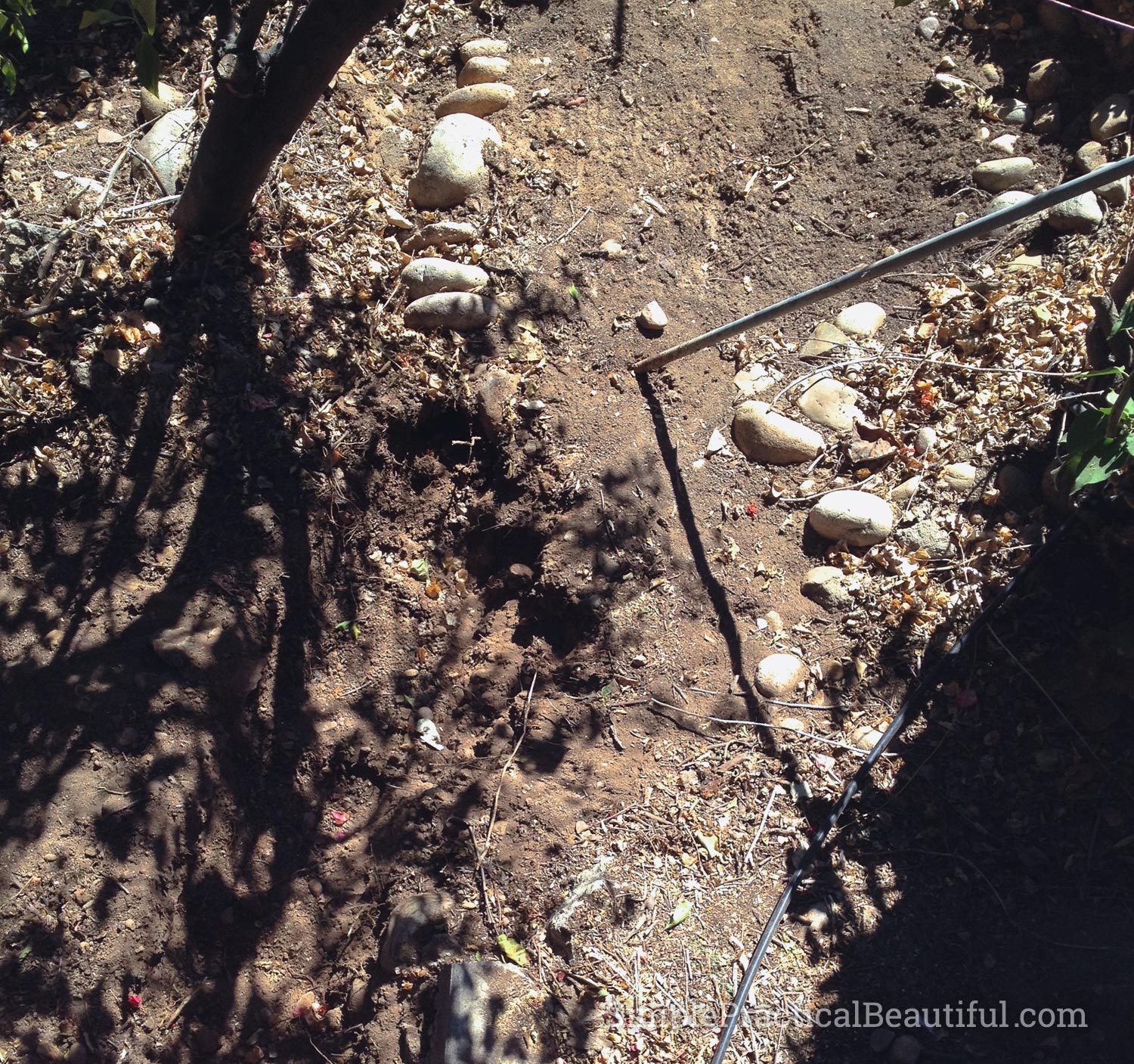 The plants are cleared, and the ground is ready to start the wall. 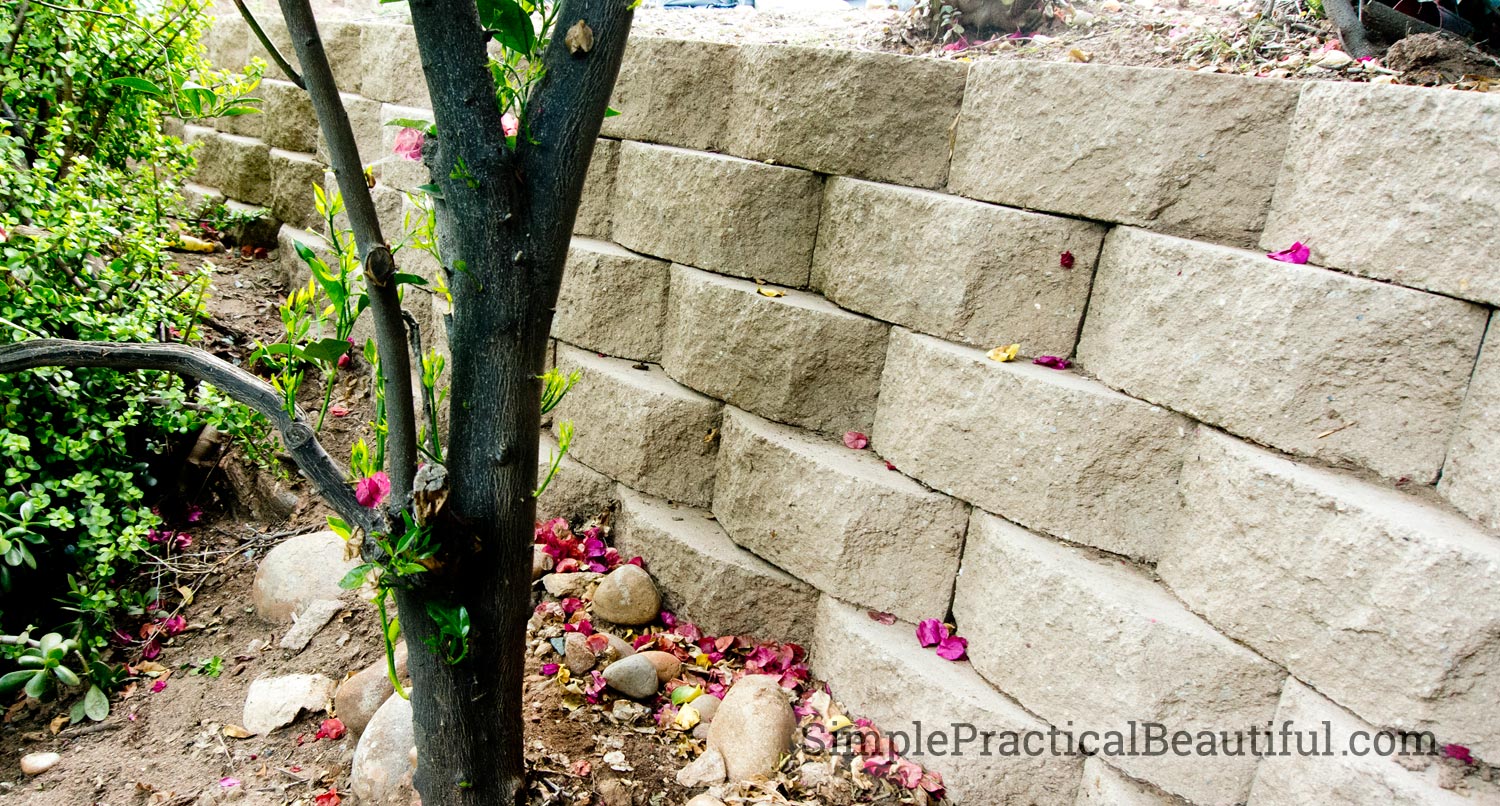 We planned the wall to curve around a citrus tree on the slope.

First, the bottom row of a retaining wall has to be buried to give the wall support. We dug a trench for the deepest part of the wall. The trench had to be deep enough to fit the first brick and 6 inches of gravel and sand.

I should stop using “we” because at this point because my awesome husband did pretty much all of the work. I once placed one brick, and it nearly killed me. Seriously, those bricks are heavy. And they scrape your skin–ouch! 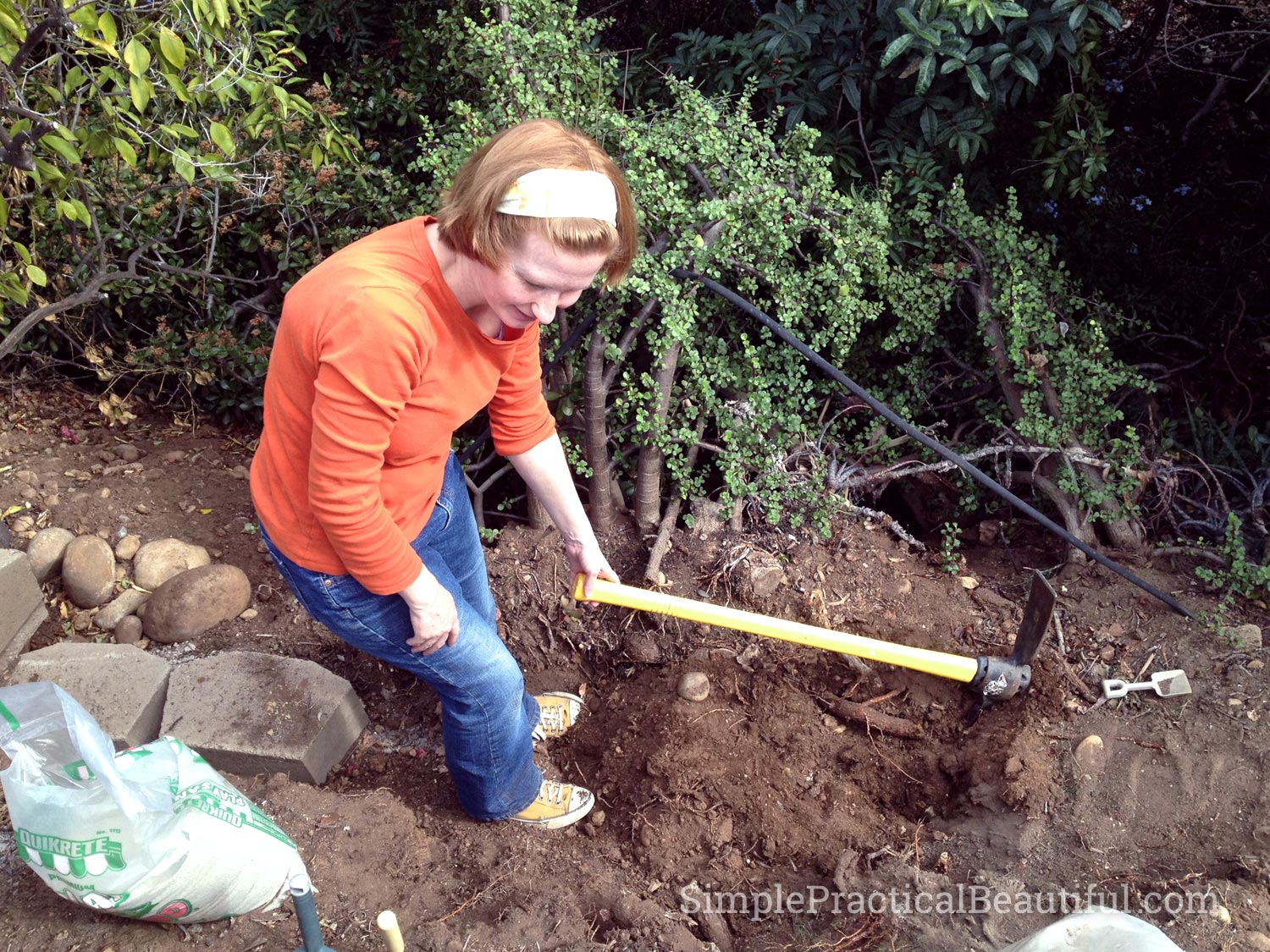 A rare moment when I helped dig the trench for the third row of bricks.

First, he put gravel in the trench, then he added sand. Next, he placed and leveled each brick, one at a time. It sounds simple, but that was the hardest part of the wall by far. That first row has to be perfectly level if you want your wall to be level and secure, so he spent a long time on each one of those first bricks. We kind of took a break from the wall for a few months after that. Oh yeah, and had a baby.

Once we got back to building the wall again, each row after was a little easier than the last. 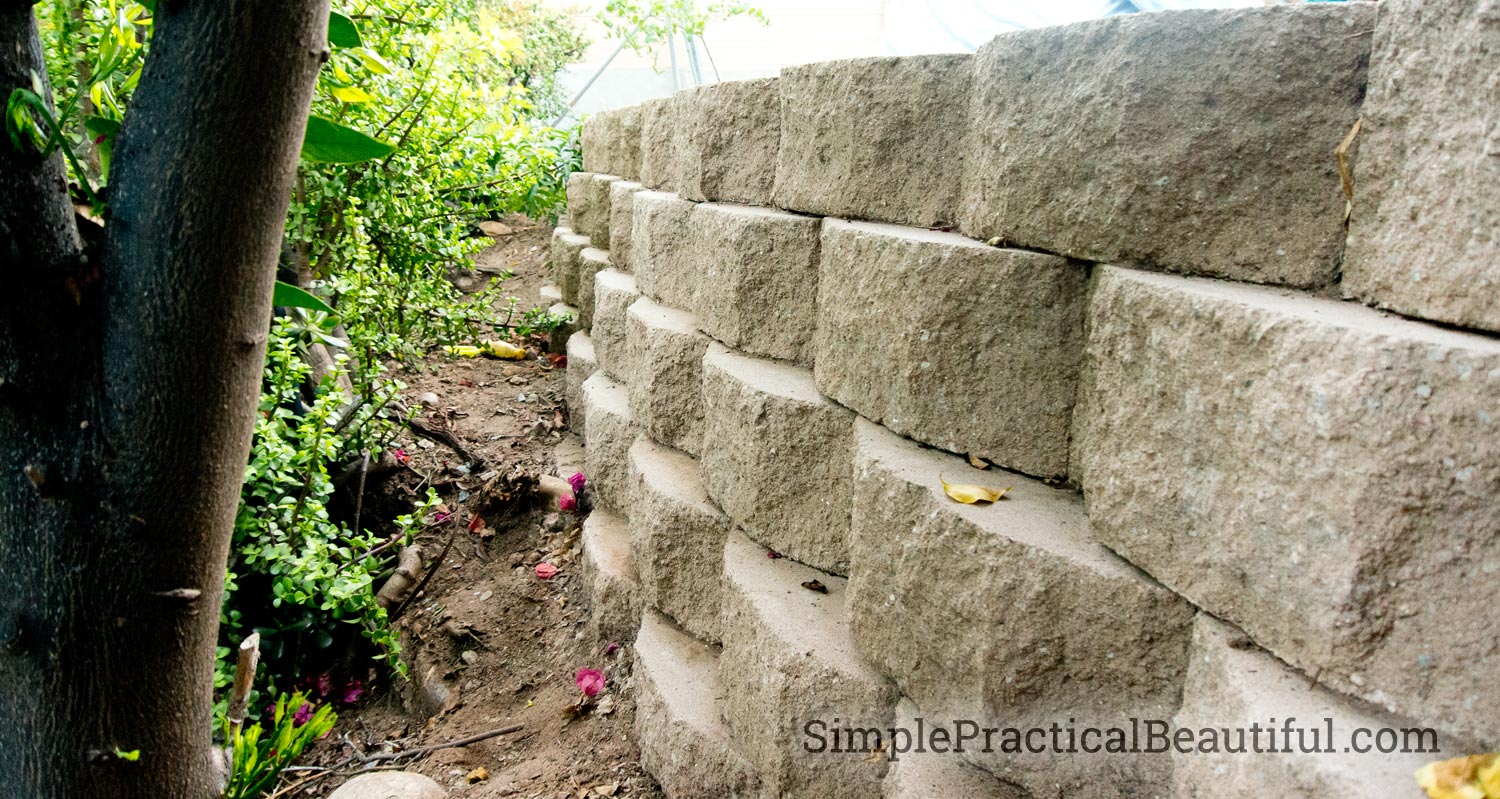 You can see how each layer ends into the ground as the slope gets more shallow.

After we had a couple rows in all the way across, we put in the french drain surrounded by lots of gravel. Any wall more than a foot or two needs some way for water to get out. Otherwise the trapped water will make the dirt really heavy and will push the wall out. 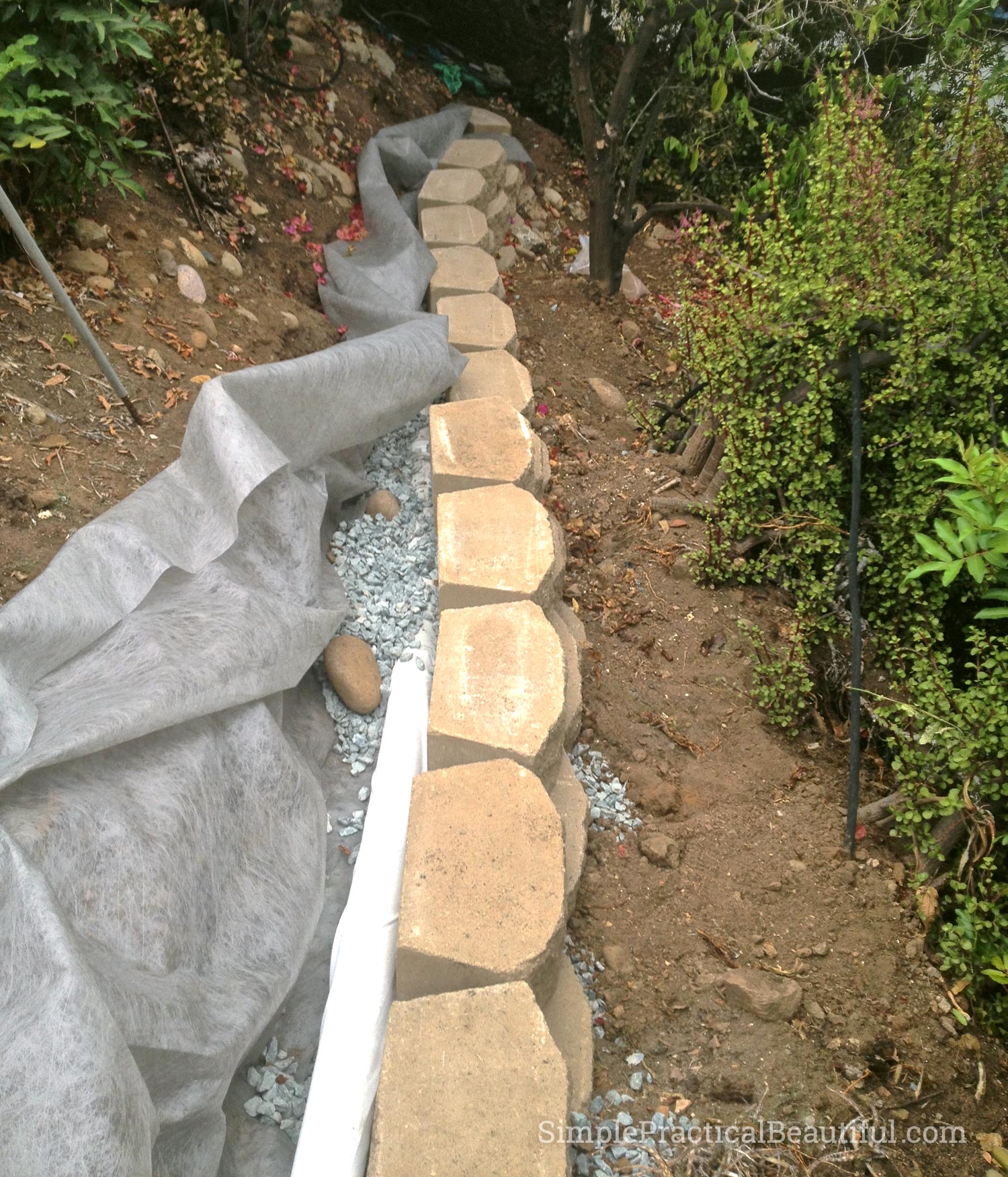 The french drain with a fabric cover being buried in gravel behind the wall.

FYI: the french drain has to go in with the holes down to work correctly, which just seems backward. Here’s a good YouTube video explaining why. 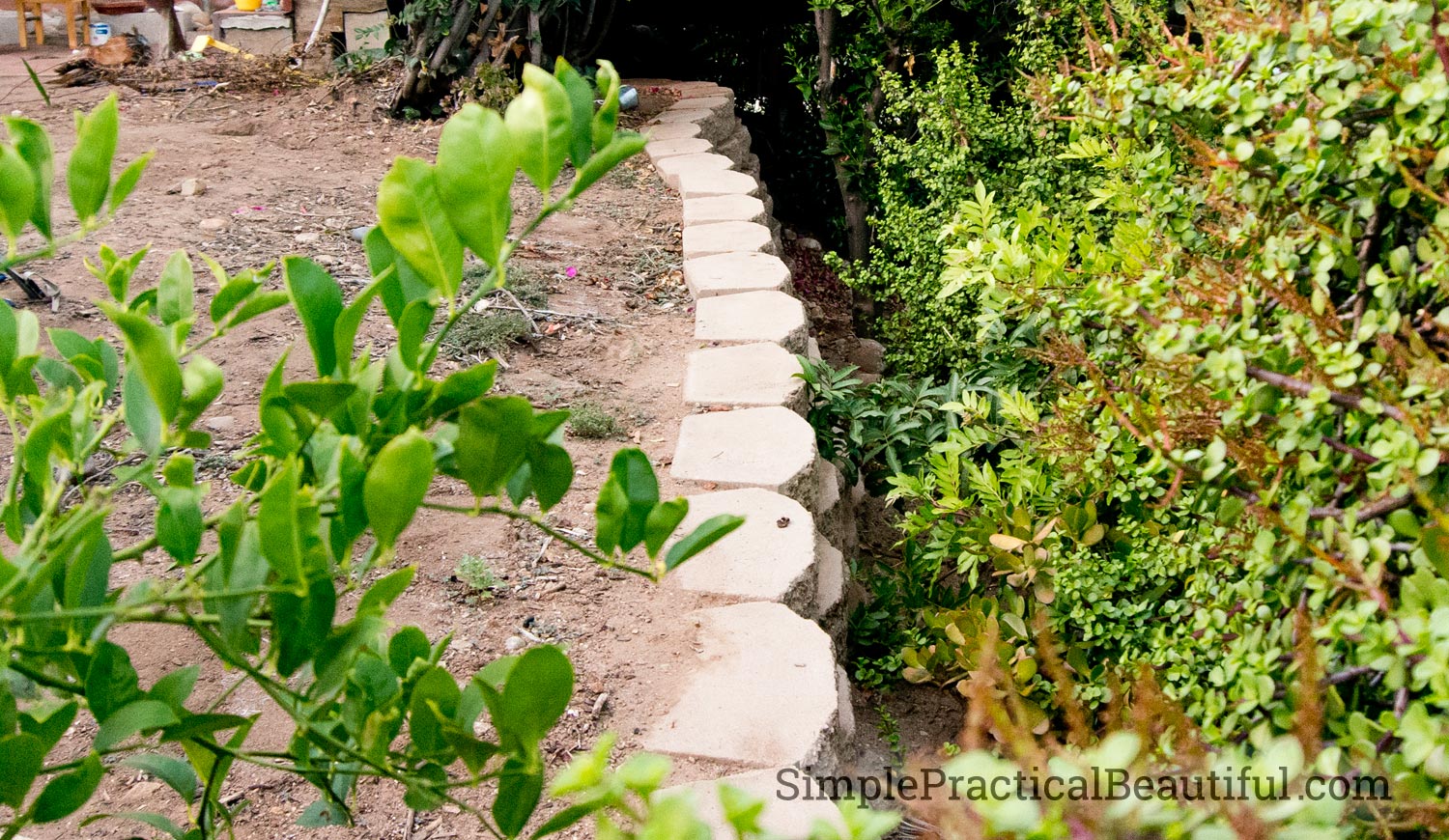 The finished wall and a flat backyard.

Wayne finished laying all the rows of bricks until it was level with the flat part of our yard all the way across. Isn’t it beautiful?! All we need now is the capstones. And a fence or something. Oh yeah, and landscaping. But the wall is awesome! 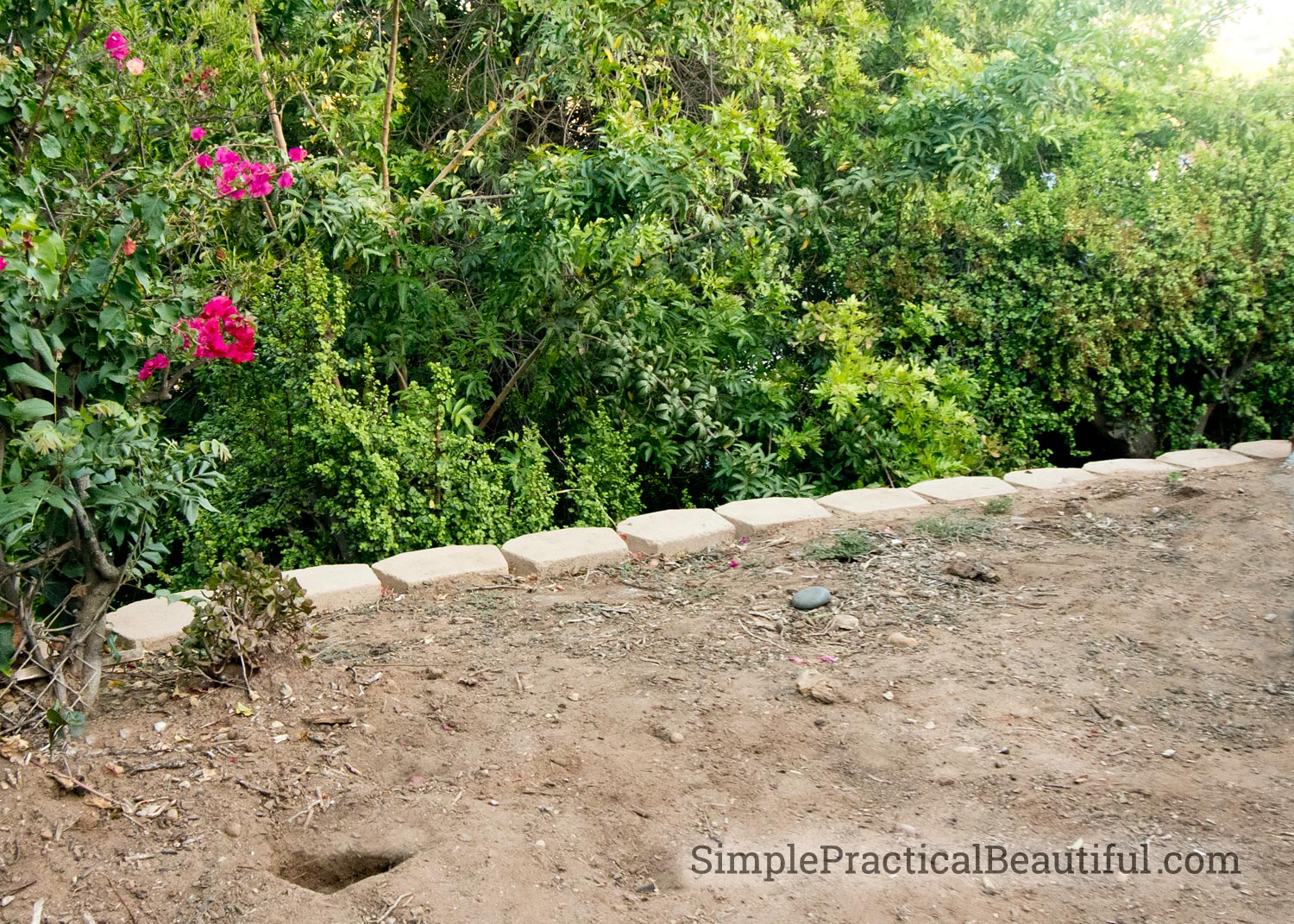 Our flat backyard, and the usable space is three feet deeper. 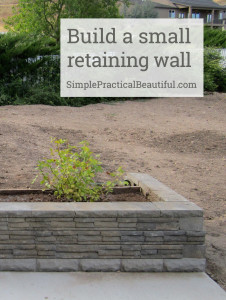 Take a look at this post on building a small retaining wall.