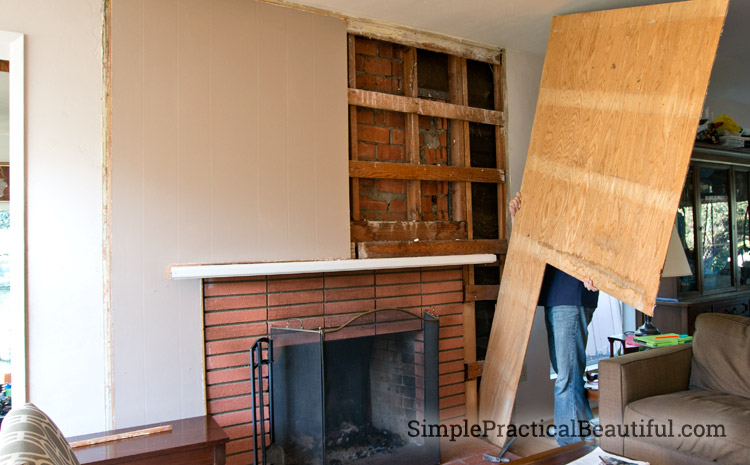 How to Replace Wood Paneling with Dry Wall

How we removed old wood paneling and replaced it with dry wall to create a clean, modern  wall around our fireplace.

One of my three goals this year was to remove the ugly wood paneling from around our fireplace and update the living room. Well, the first half of that goal is finally accomplished. We removed the wood paneling, put up dry wall, added texture, and then painted the entire room.

Here’s our fireplace wall at the time I set the goal, all decorated for Christmas. The mantel is really pathetic. It’s only 3 inches deep, so it barely holds our Christmas cards. It’s basically a picture frame ledge. 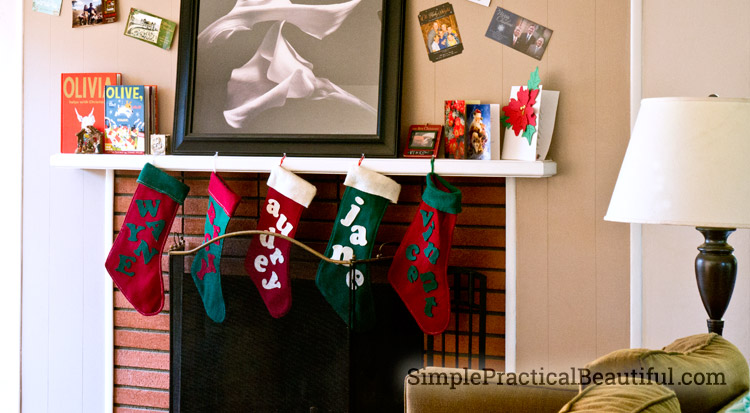 Once the decorations came down, you can see more clearly that the wood paneling is painted and has a moulding border around it. The paneling has indents to make it look like several slate of wood, but it’s just two pieces of paneling with a vertical seam in the middle. 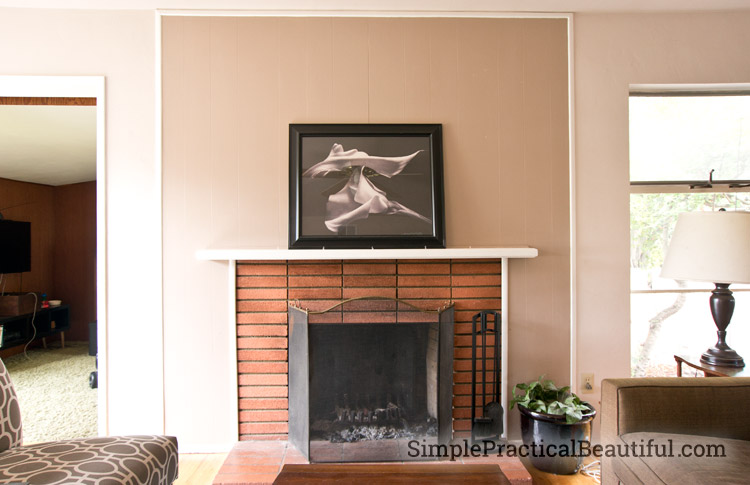 We removed the moulding boards from the sides and top of the paneling and above the mantel. Then we used a crow bar and hammer to remove the nails around the edges of the wood paneling. As soon as we could, we pulled back the paneling to take a peek at what was behind it. 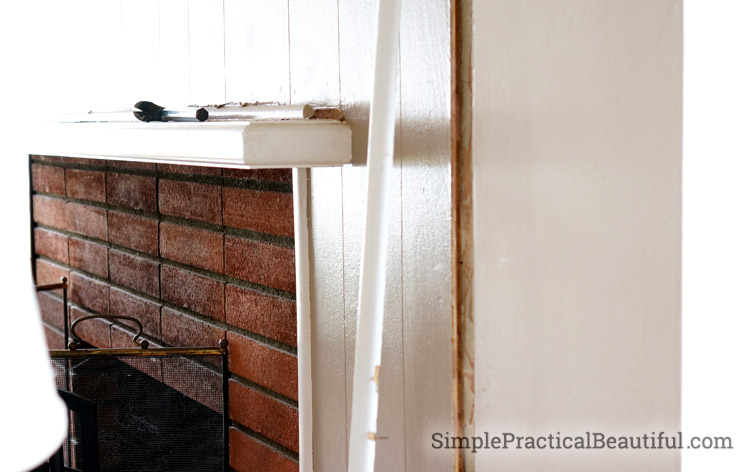 And we found… nothing. Well, okay, we found studs and a lot of spider webs and dust. That was a little disheartening. And kinda gross. But I guess we were lucky that nothing was living back there. 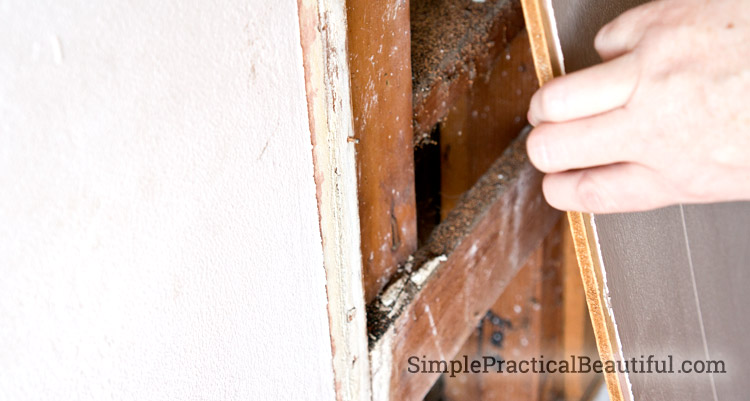 Removing the wood paneling from the wall was a lot of work. The panels were heavy and nailed into the wall very securely. The were also slipped behind part of the mantel, so there was lot of jostling and prying to get them out. 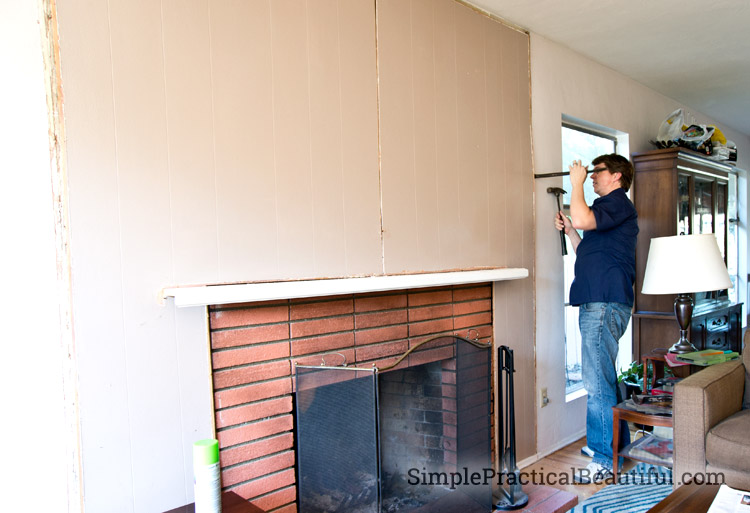 The crazy part is that beneath several layers of paint, those panels are actually real wood. Someone carved indents to make it look like fake wood paneling, but it’s actually solid wood. (There was an insane trend in the 1950s to use a real material and make it look fake.) More big scrap wood for me. I already use a small piece to make a sign for my daughter’s fairy garden birthday party.

As soon as I could, I got out our shop vac and went to work. Spiders are my nemesis, and I was not going to live with webs in my house. Luckily, nothing was alive. Besides dust, there was also a lot of plaster and mortar drippings from 60 years ago when the house was being built. The shop vac took care of those too.

As you can see, the finished bricks did not go all the way up. The exposed bricks behind the studs are part of the chimney. And are not made to look nice. Neither is the mortar work between them.

I have to admit that at this point, we felt a little discouraged by finding just studs and a little overwhelmed by the idea of putting up dry wall. So, the exposed wall stayed like that for a few months. I like to think that we had an industrial-loft look in our front room during that time. Really, I think it just looked like an unfinished home project. But it was summer break, and we had more important things to do. 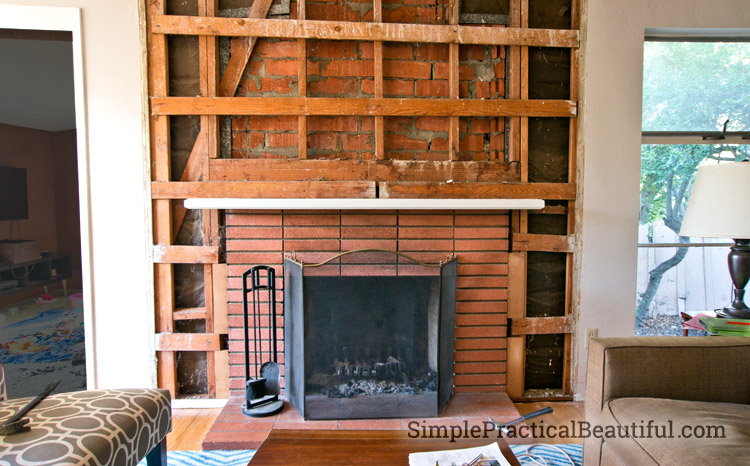 Preparing the Wall for Dry Wall

Then one weekend, we went out and bought dry wall sheets to motivate ourselves to get working on this project again. Buying stuff always seems to be the easiest part of every project. But with two sheets of dry wall sitting in our living room, we started prepping the wall for the sheets to go up.

First, we had to remove the cross beams that were attached to the studs. I don’t think they are actually called “beams” but they are boards that the wood paneling was nailed onto. 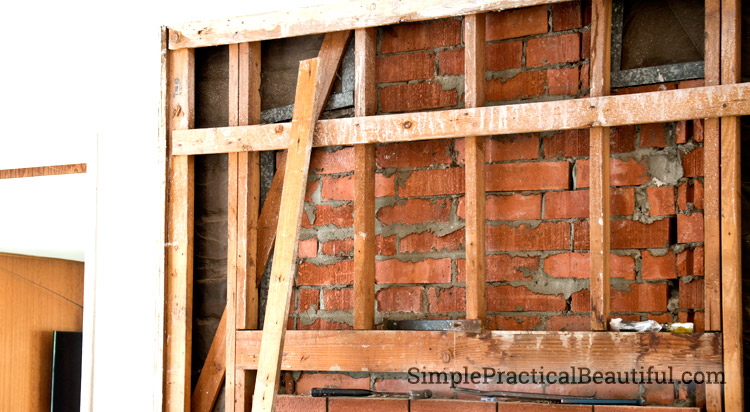 We also pulled out a lot of nails that were sticking out, and hammered in a few that wouldn’t come out. Nothing could stick out from the studs or the dry wall would fit right. 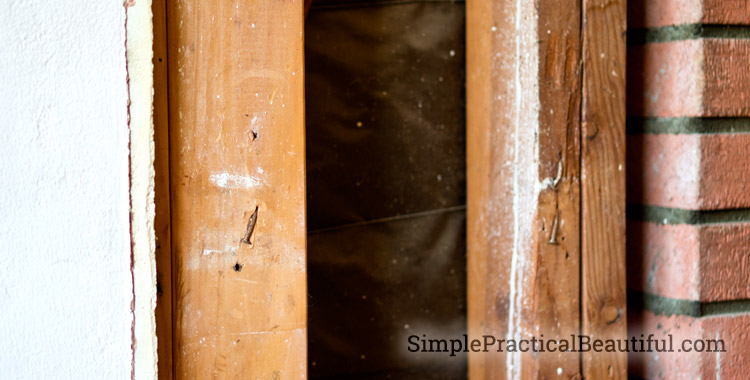 As we were about to put up the dry wall, we realized that the wood paneling, with those cross beams, had been thicker than the dry wall. We had to add shims each of the studs so that the new dry wall would be flush with the rest of the wall. Shims are cheap, thin boards that add a little width were you need it. 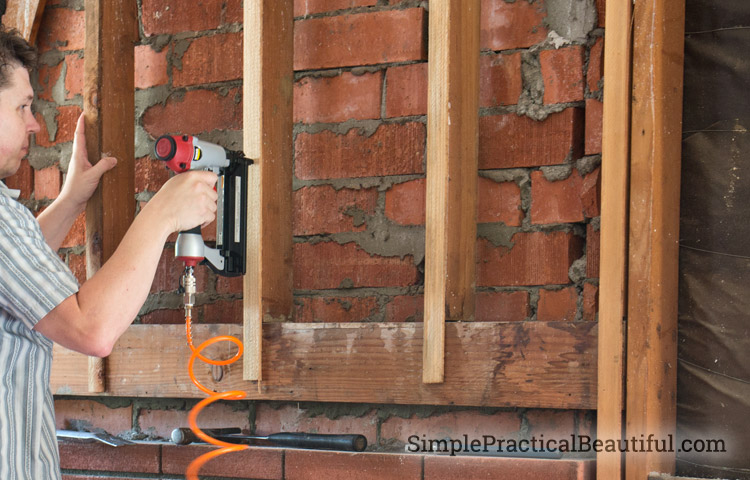 With the wall prepared, we were reading to put up our new dry wall.

Because there’s a lot to show you about cutting, mounting, mudding, and painting the dry wall, it’s in another post. Click here to read Part 2 of this post: Installing Dry Wall.