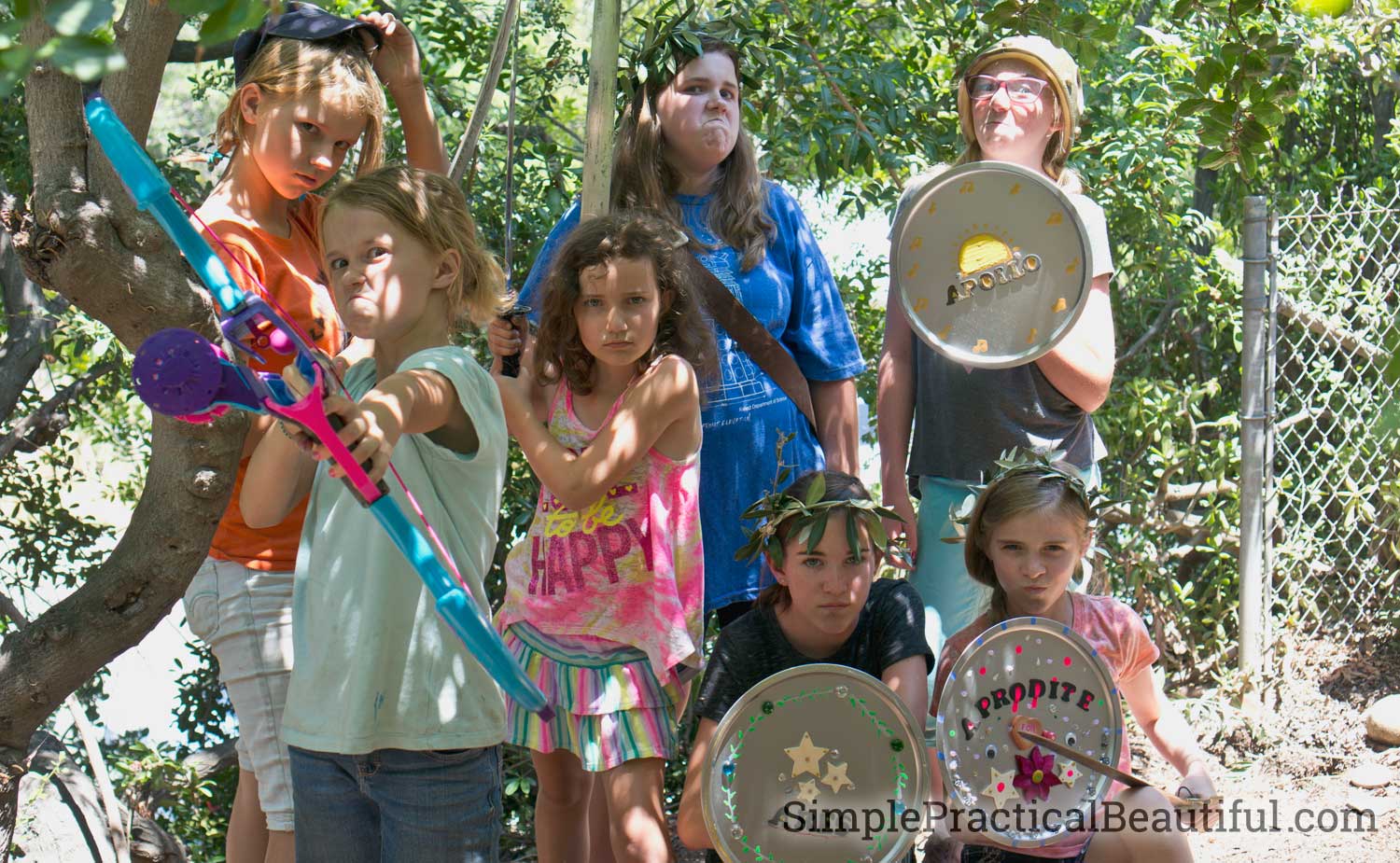 Celebrate your birthday Percy Jackson style at a Camp Half-Blood party right in your own backyard. Invite all your demigod friends and go on a quest.

My daughter loves Percy Jackson and all of the Heroes of Olympus books by Rick Riordan, so we decided to celebrate her 12th birthday with a Percy Jackson party.

We found these amazing illustrations by artist Hydrogene that feature several greek gods with an icon for each. They were perfect for the front of our invitations. (Btw, if you need a gift for your favorite Percy Jackson fan, check out these cool gift ideas by the same artist with the Poseidon illustration, or Athena if she prefers Annabeth, like my daughter.) 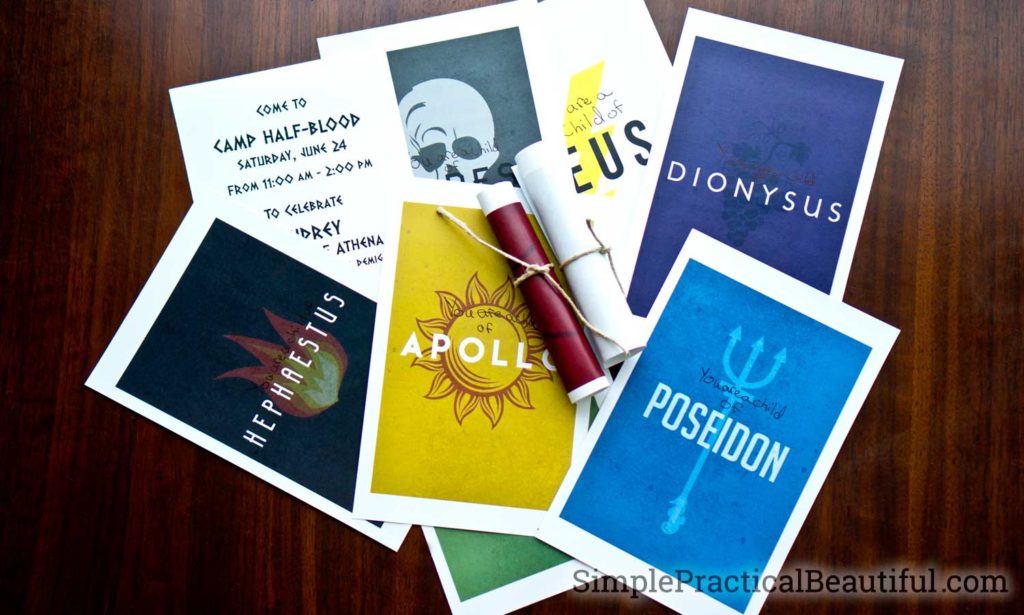 We printed the color illustrations at Staples for just a few dollars so that the color would be more solid and vibrant than our inkjet printer can do. Then we printed the black and white information on the back at home.

Each guest was assigned a different greek god as their “godly parent,” shown on the front of their invitation. We delivered the invitations rolled up like a scroll.

The entire party happened outside because of our kitchen renovation, which worked out great for a Camp Half-Blood party.

We decorated our back patio to look like an ancient greek pavilion. Mostly, we used grape vines and green streamers. Technically, Camp Half-Blood is in New York, but we live in a mediterranean climate, so greek worked better for us.

The way to Camp Half-Blood is often surrounded by monsters, so my daughter drew monsters all over our sliding door that the guest would come through to the party. The drawing don’t look great in photos, but they looked really cool in real life. She drew a minotaur, a gorgon, a harpy, a hellhound, and several others. 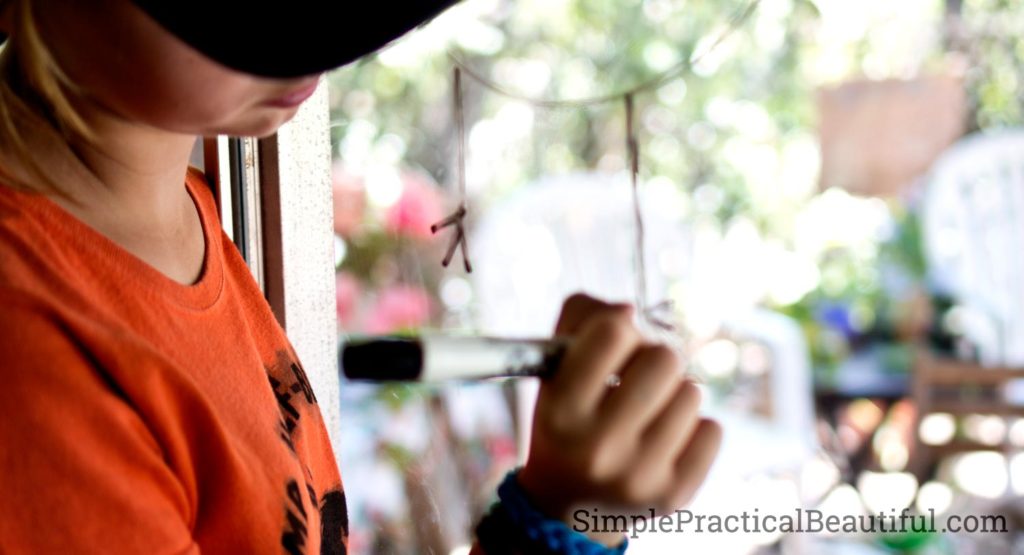 We also set up the shields as decorations. I’ll be sharing how we made and decorated the shields in another post soon.

When the shields were ready to wear, we set up a part of our yard with trees to take pictures of the demigods. We brought out a few of our Halloween weapons and costumes. We also made laurel crowns from cuttings from our olive tree (any tree or vine would work though). 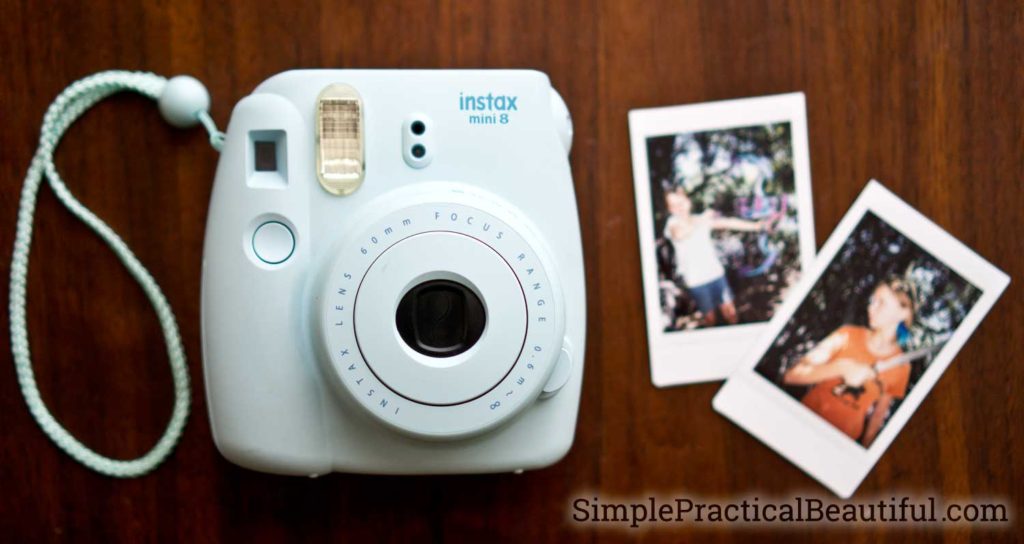 We used my Instax Mini to take instant photos so the kids could take home their picture as a souvenir. We also took a couple of group photos with a digital camera. This one in “demigod warrior pose” is my favorite. 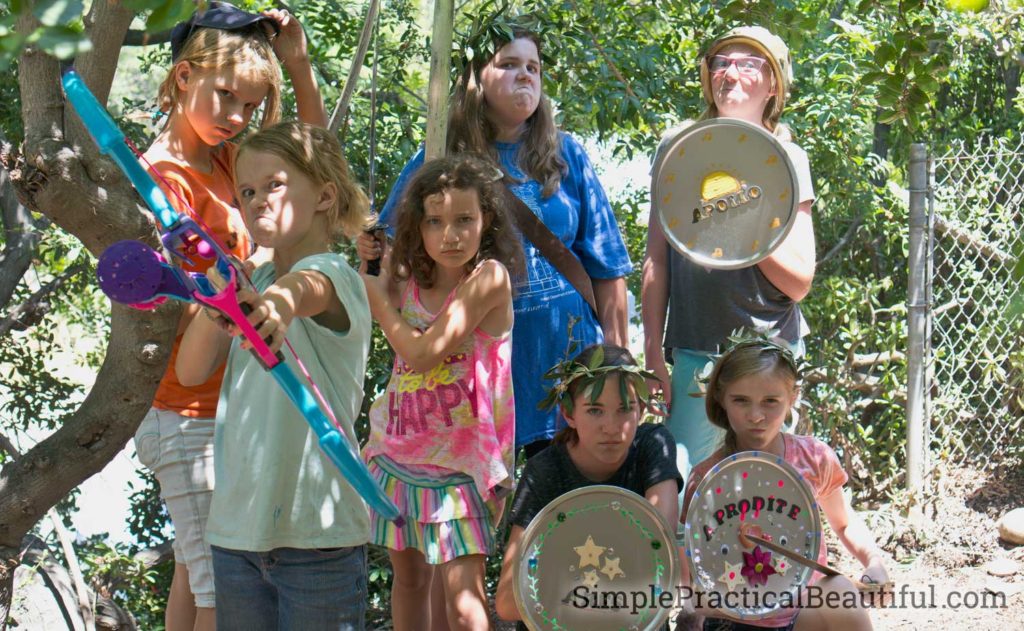 Any Percy Jackson party has to include a quest, and it’s even better if the quest is foretold by an oracle. We created an oracle inside our playhouse with lots of scrap fabric and Halloween decorations. During the party, the candles were lit and there was dry ice smoke in the cauldron, but I forgot to get a picture then. Here’s what is looked like before the party. 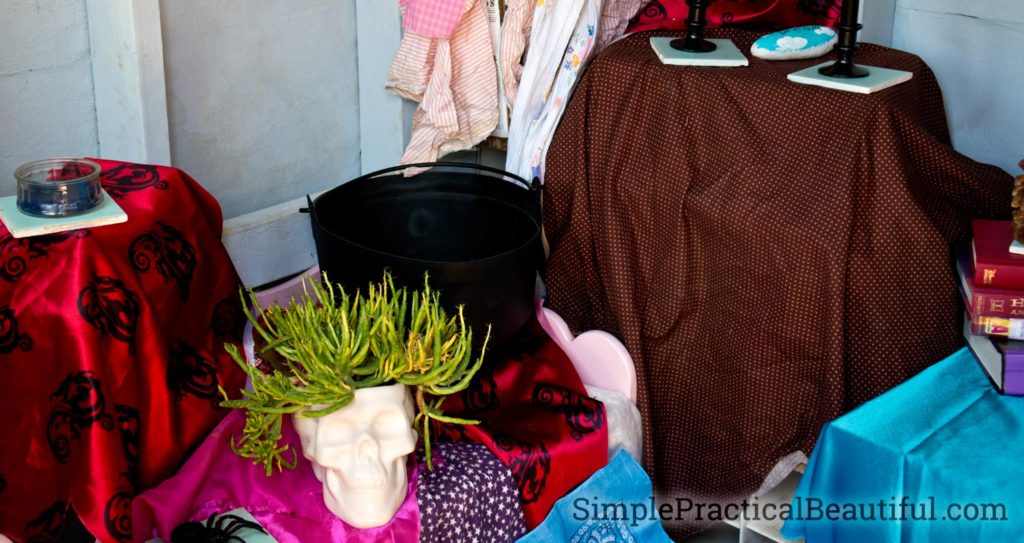 When all the “demigods” were in the playhouse, someone outside read the words of the oracle to start them on their quests (see the printable below).

Before leaving on their quests, the demigods sent iris messages to their loved ones by tossing a gold drachma (carmel candy) into a sprinkler and saying farewell. 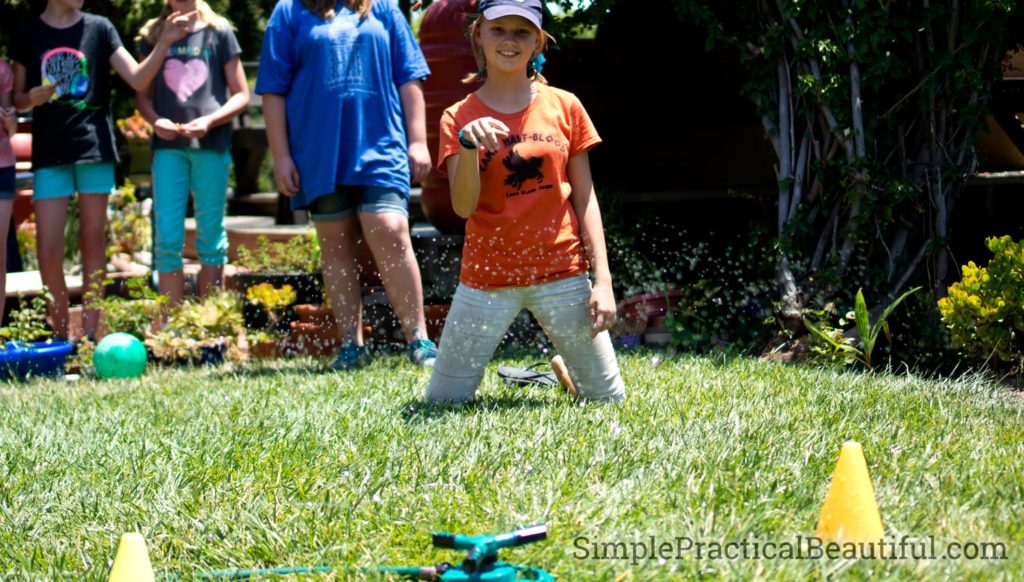 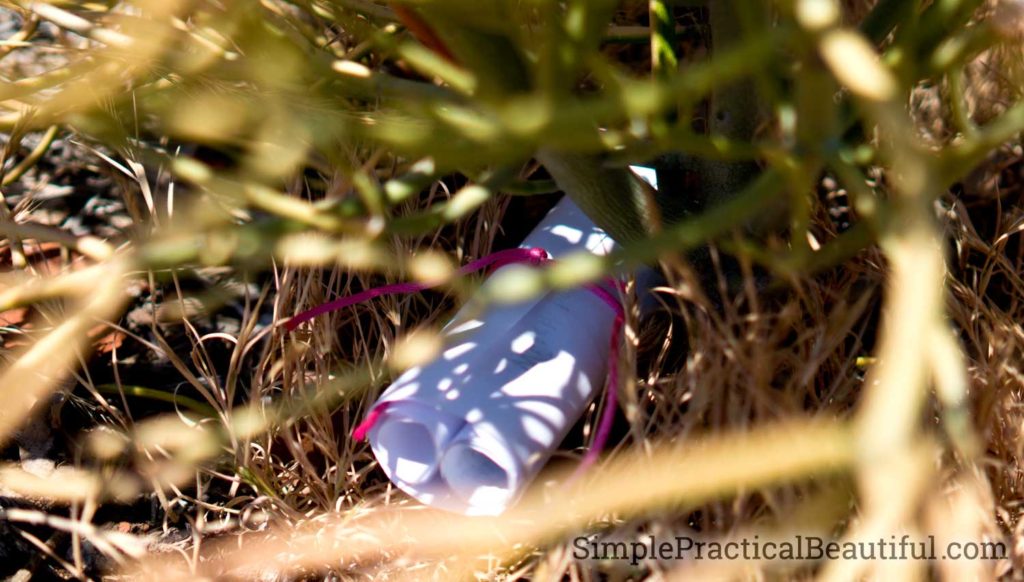 The quest was the main activity of the party. There were 7 clues, each from a different greek god, that lead them through their quest and back to Camp Half-Blood. Each clue gave hints to the location of the next clue, taking them all over our front and back yard, and even to the neighbor’s house.

You can download all of the clues I made for the quest in a Word document, you’ll just need to change a couple of things to fit your party location. 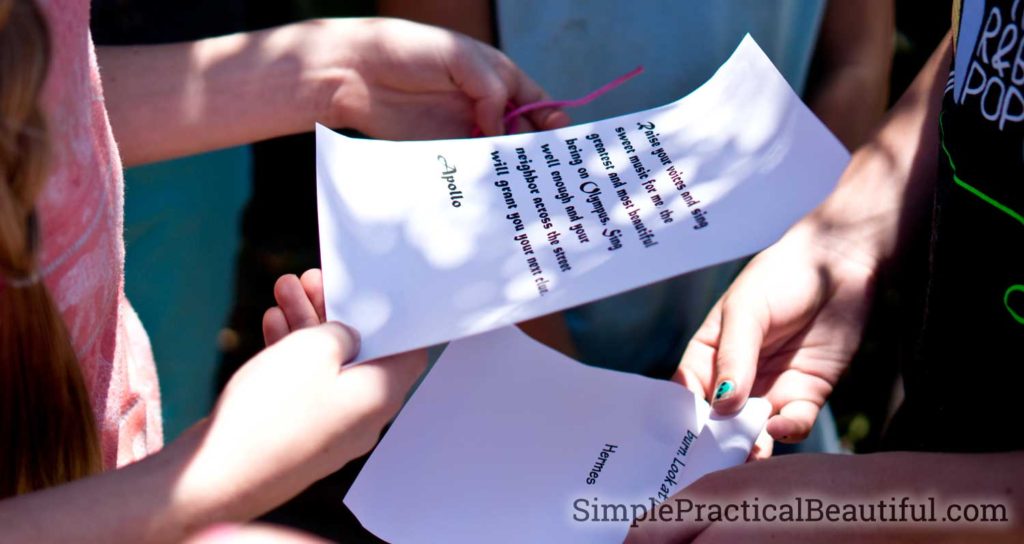 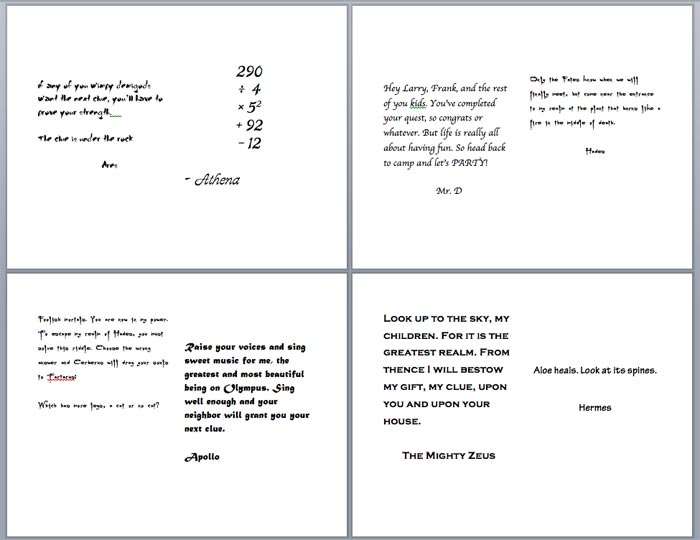 They looked for aloe plant, knocked down a box on the roof, solved a riddle from Hades, sang to our neighbor, used math to learn an address, and more. The quest took almost an hour to complete. 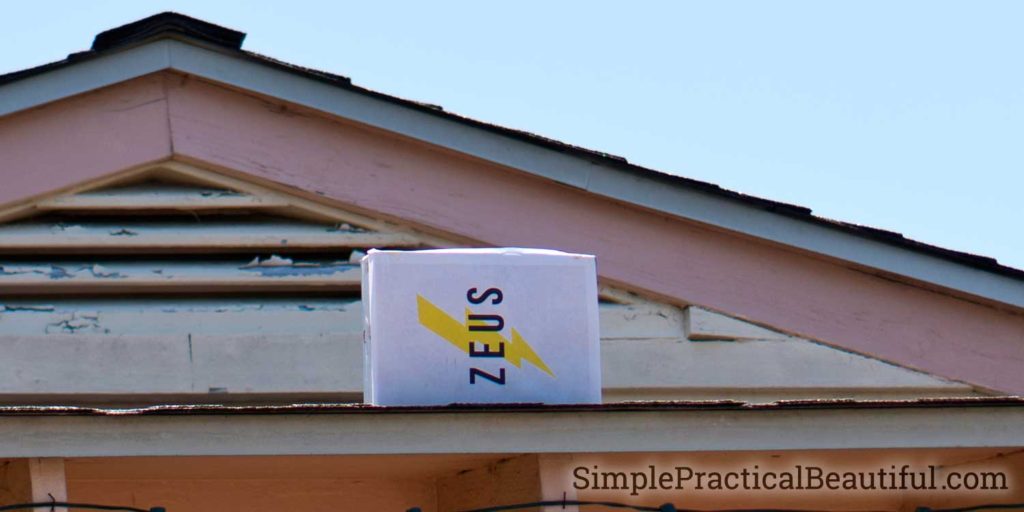 My daughter insisted that all of the food was blue because that’s what Percy Jackson’s mom would have made. Well, all except the strawberries because they grow around Camp Half-Blood. I set the food out on platters to look like a feast fit for the gods. 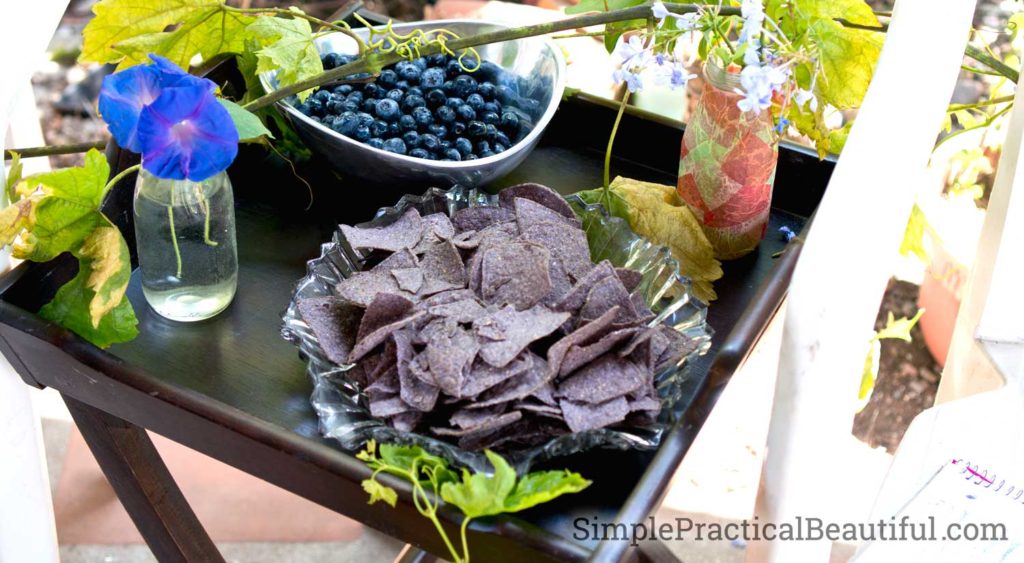 Also, at every meal, Percy Jackson and his friends at Camp Half-Blood make an offering to the greek gods by putting a little of their food into a brazier with a fire. So we set up a fire in our little firepit to accept offerings. And as long as there was a fire, we roasted marshmallows too. 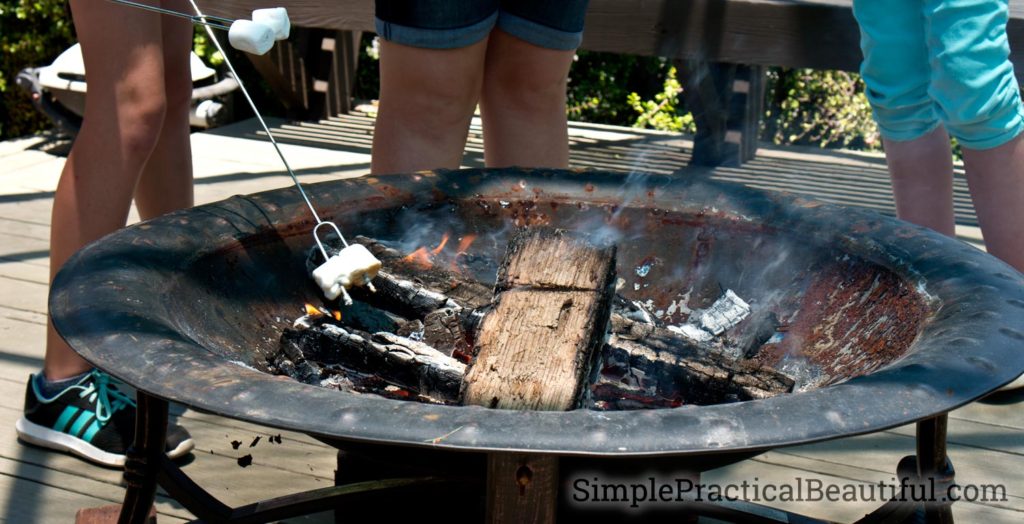 Each year, the demigods at Camp Half-Blood get a bead to commemorate one more year they stayed alive. We bought large wooden beads for our demigods to decorate. We found it was easiest to paint them on a wooden skewer. We let them dry on the skewer too. 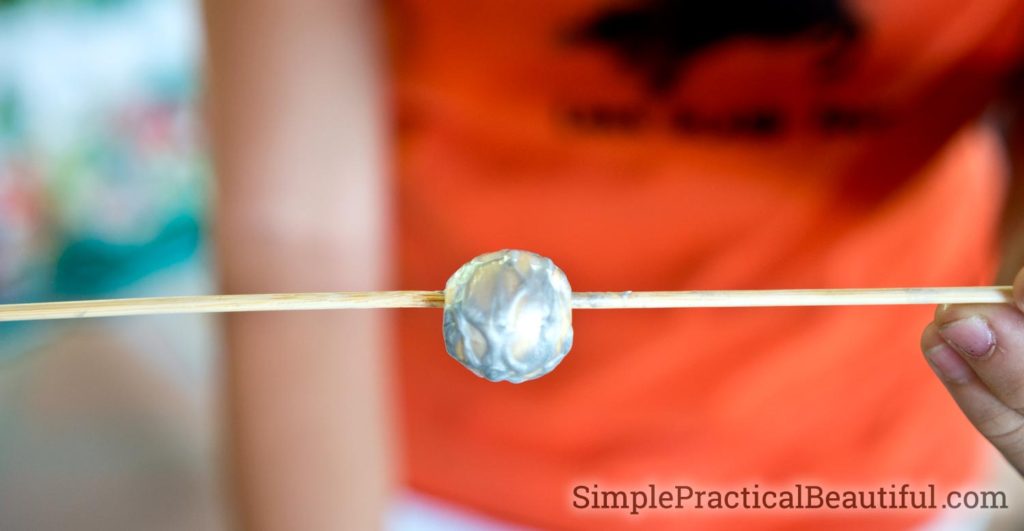 Once they were dry, we gave each guest a leather cord long enough to be a necklace, and they wore their bead on the cord.

We ended the party with battle practice, capture the flag style. We divided the group into two teams and each team built a cardboard fort. (We have a lot of cardboard boxes right now from all our new Ikea cabinets). In the center of the battle field, we put buckets of water balloons and a sprinkler. Each team also got a few water balloons to start. 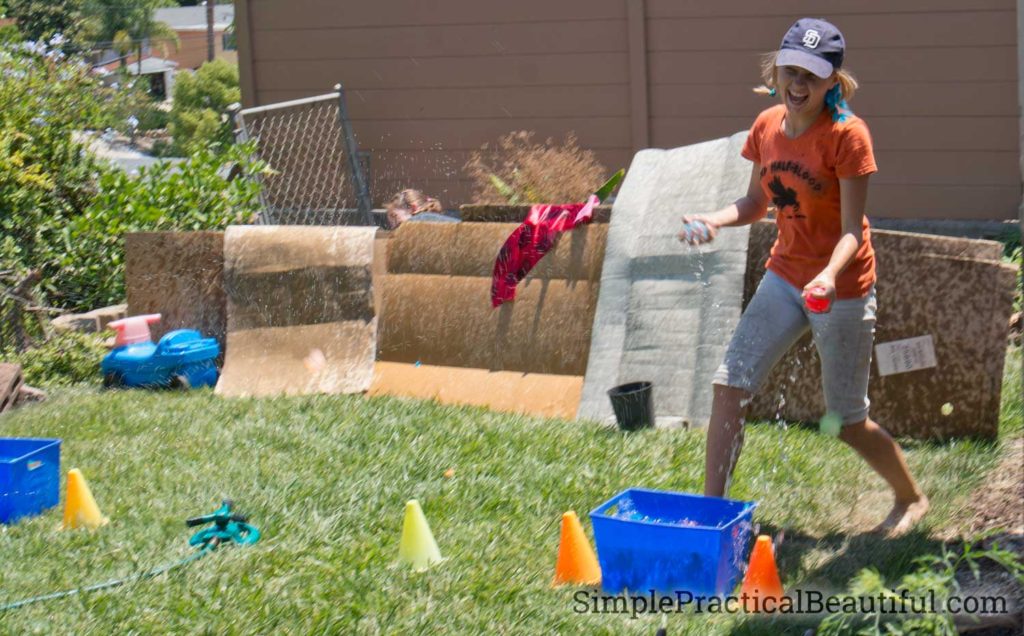 The goal of the games was to steal the other team’s flag from inside their fort. It was an epic battle. Everyone got soaking wet. My only regret is that I didn’t warn parents that their kids would be coming home wet from the party.

My daughter made her own Camp Half-Blood T-shirt, as you can see in the picture above. She  used the same method I used to make the Harry Potter T-shirt (read more about it in that post). We wanted to make shirts for all our demigod guests, but orange t-shirts are either really cheap and on clearance or really expensive and hard to find. Unfortunately, when we tried to find some, they were really expensive and hard to find.

This was a Percy Jackson party to remember. We had food, games, crafts, pictures, water balloons, and a quest. Some of our guests even want to read the books now.