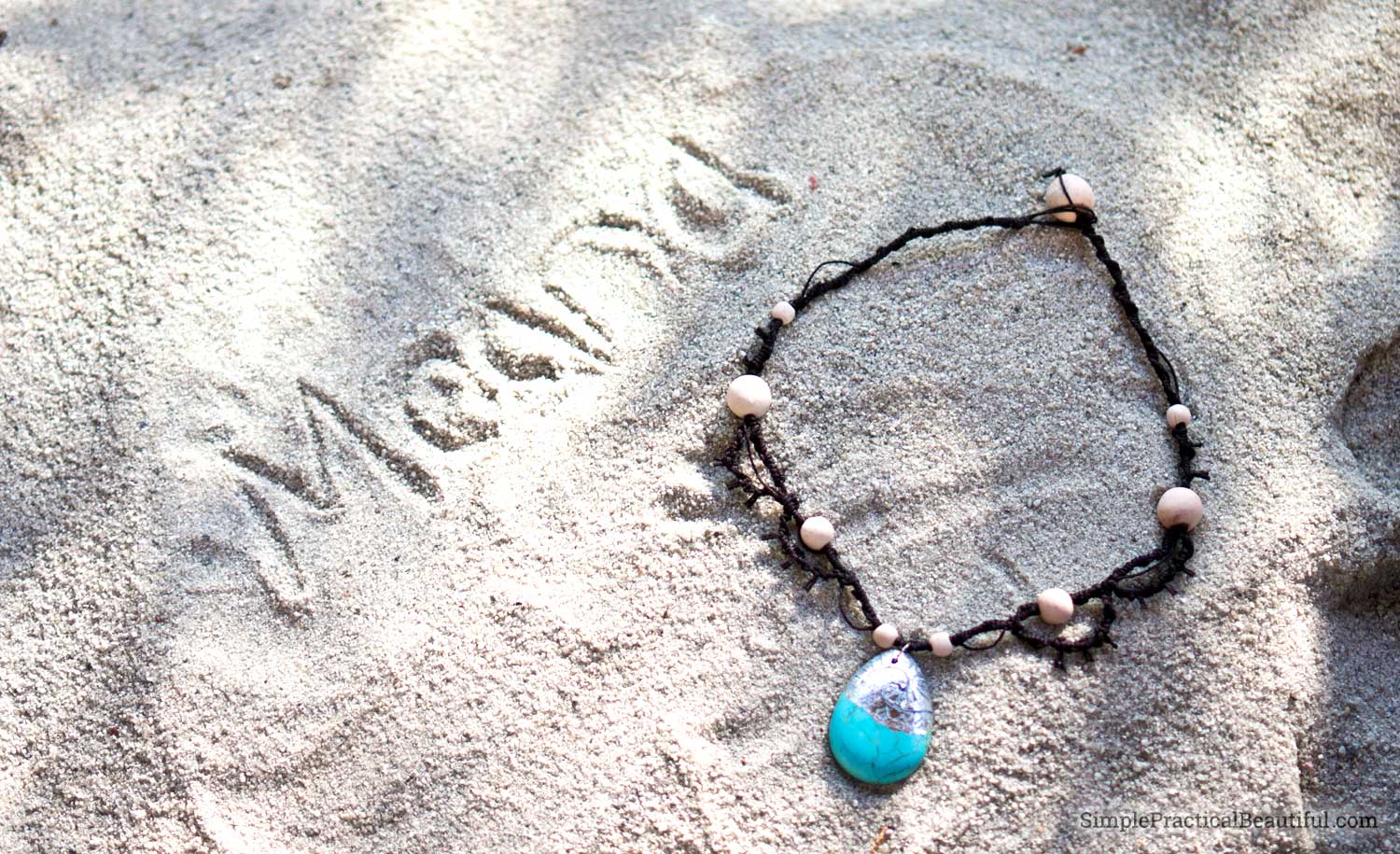 Learn how to make Moana’s necklace with hemp, and how to make a charm that looks like Moana’s locket. A great DIY jewelry and gift idea. 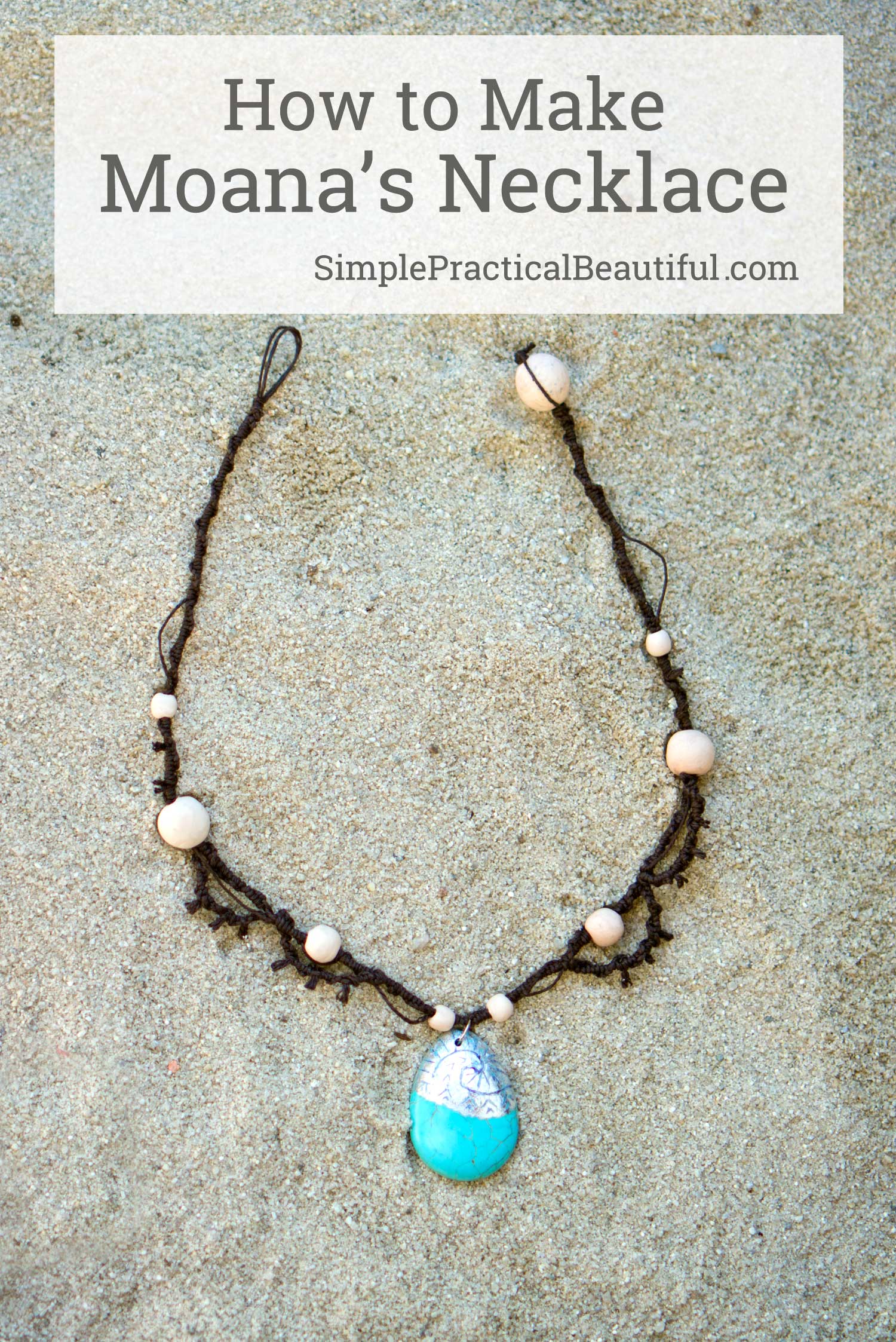 My daughter and I just saw Disney’s Moana, and it was amazing. It has beautiful animation, a great adventure storyline, and fun songs. And Moana is a strong, brave female character who is also compassionate and kind. I love when my daughters get to see characters like her. We can’t wait to see it again.

In the movie, Moana’s necklace is given to her by her grandmother, and Moana’s wears it and uses the necklace throughout most of the movie. It’s a beautiful necklace that has the look of a rustic fishing net. I made a replica of the necklace for my daughter. It’s 15 inches long, so it fits her now, but will also continue to fit her when she’s an adult.

The charm in the center of Moana’s necklace is actually a locket that holds the heart of Te Fiti. I didn’t have a locket in the right shape, so my necklace has a decorated stone charm instead.

I happened to have a teardrop-shaped turquoise stone in my jewelry findings. It’s beautiful and only needed the silver design to look like Moana’s necklace. If you don’t have a turquoise stone, you could always make a 2-inch oval out of polymer clay and paint it turquoise. 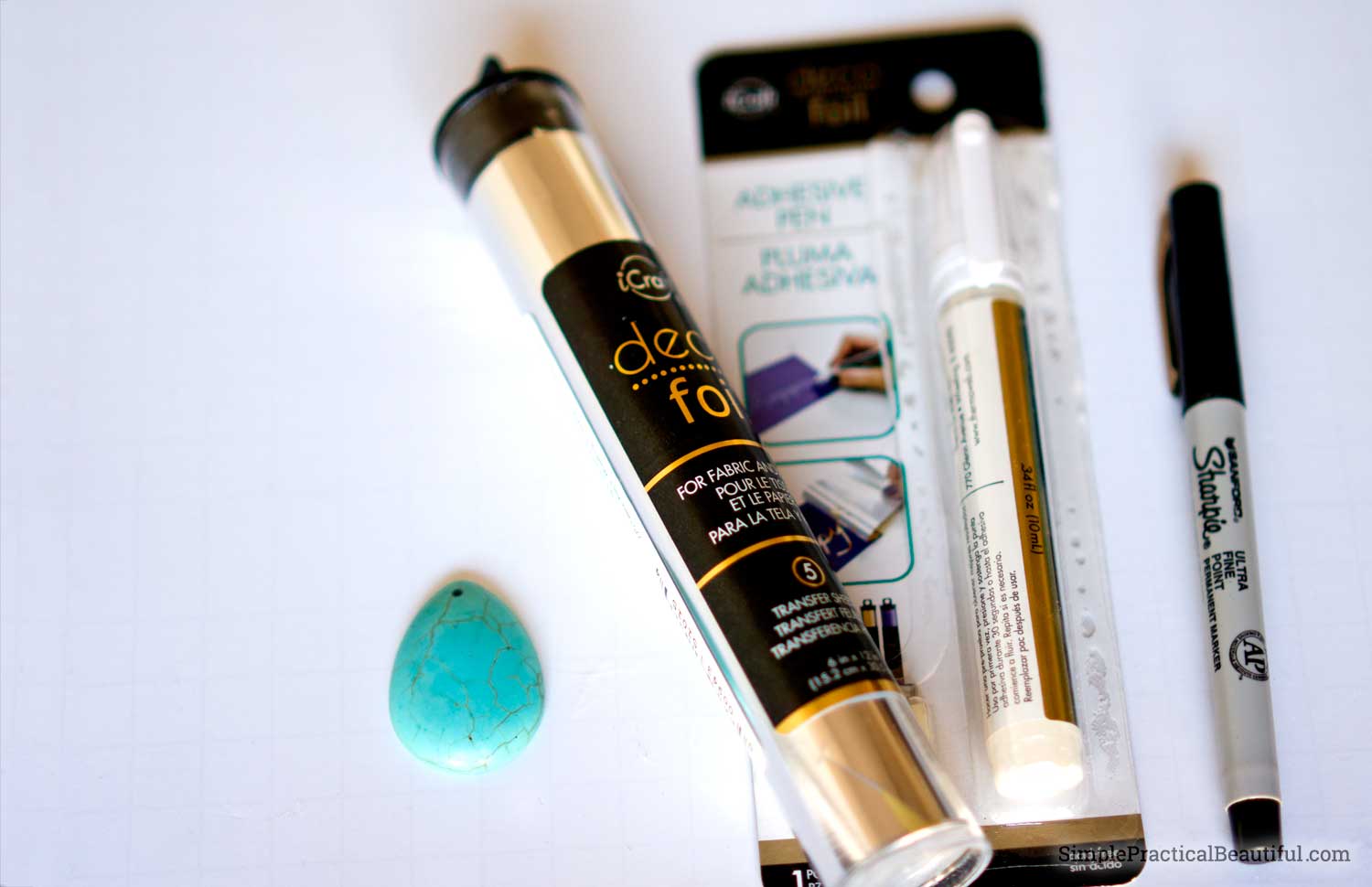 To add the silver design, I used silver Deco Foil with an adhesive pen.

I covered the part of the stone I wanted to remain turquoise with painters tape cut in a wave shape and then coated the remaining part with Deco Foil adhesive pen. The Deco Foil sticks right on the adhesive and it coated the stone with shiny silver. 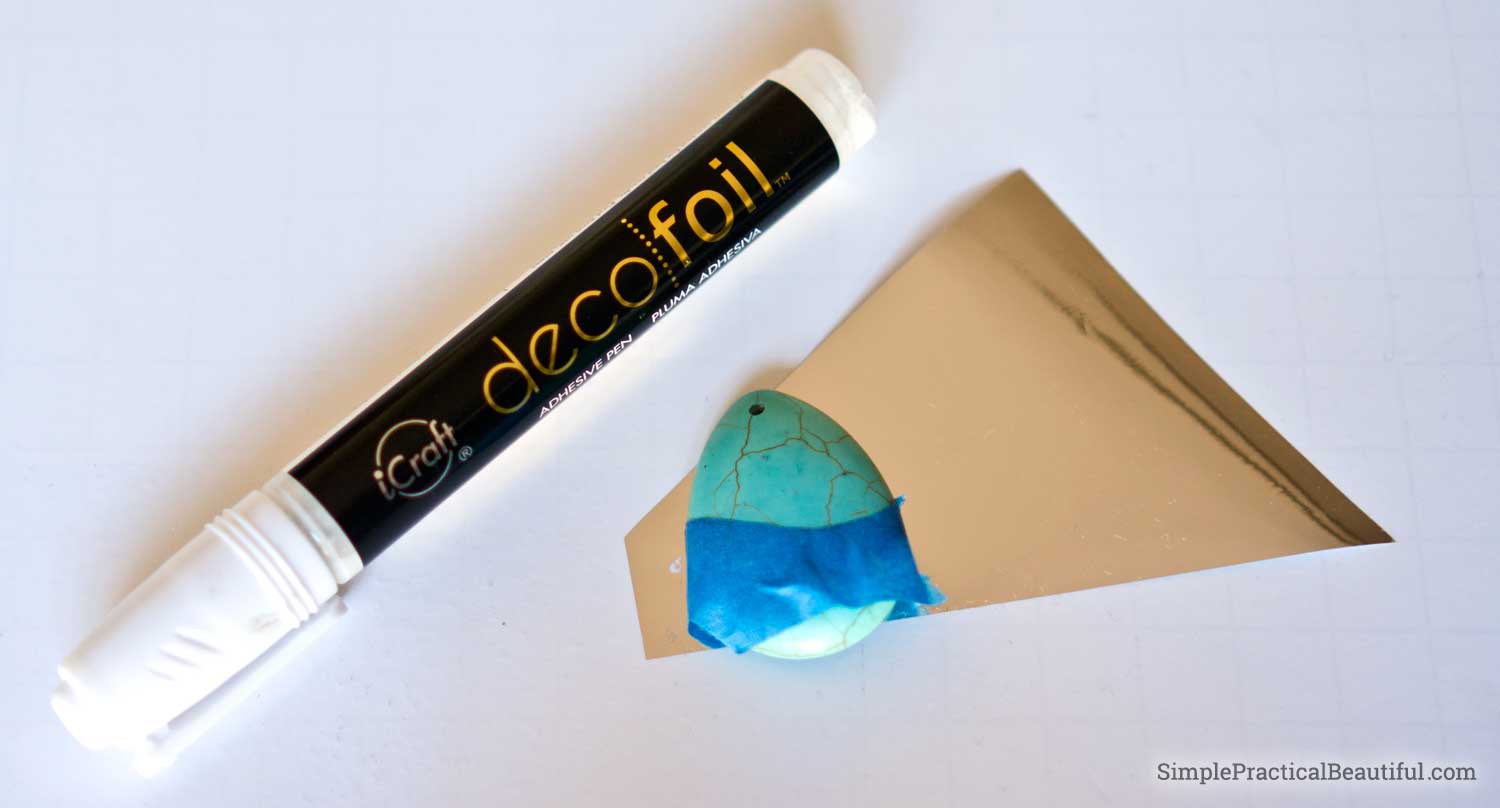 I used a fine-tip Sharpie to draw the design. The fine tip scratched away the silver more than it added black ink, but I really liked the results. 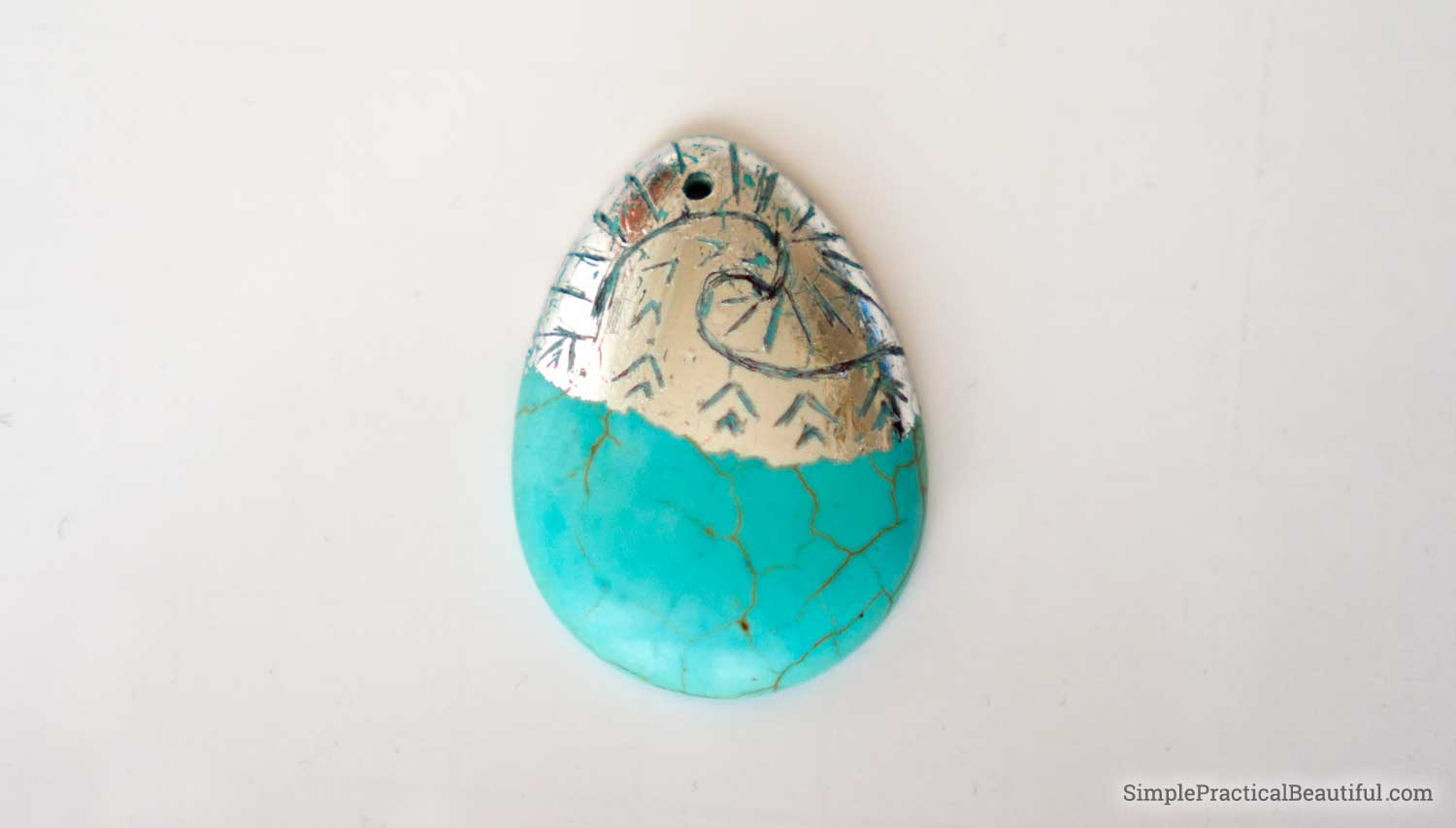 I covered the silver design with clear nail polish so the silver wouldn’t scratch off anymore and let it dry overnight.

Tying Knots – The Basis of the Necklace

I learned to make friendship bracelets as a kid where you put a few different colored strings together and then tie one of those strings around the whole thing with a simple knot. If you’re not sure how to do it, read through my post on How to Make a Friendship Bracelet. 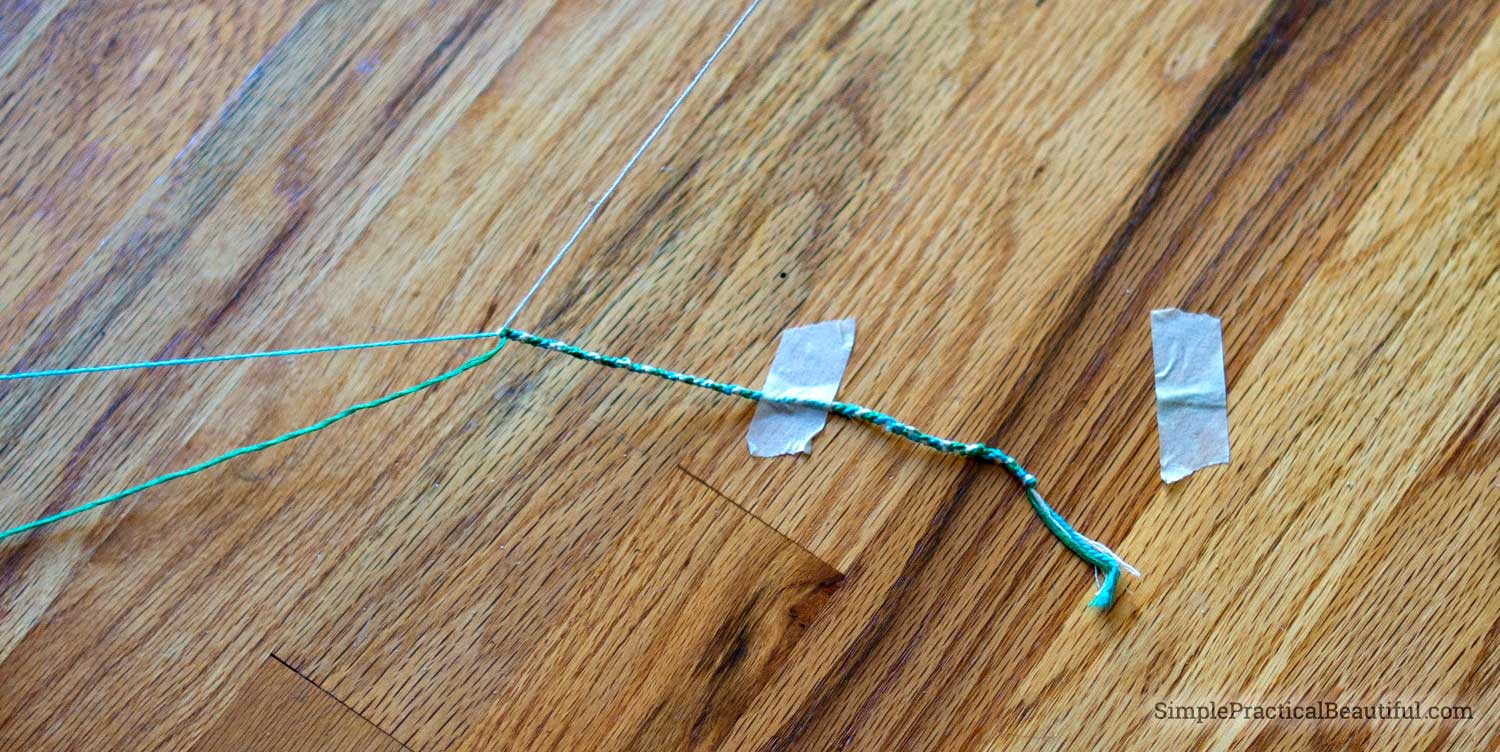 That method of tying knots is what I used to make Moana’s necklace. If you’ve never made friendship bracelets that way before, you might want to practice making a few before you try to make Moana’s necklace, which is a lot more complicated. If you have made them before, you still might want to practice the same processes using hemp, just to get the hang of working with a stiffer cord.

Take the hemp cord and cut it in half, so that you have two 8-foot pieces of hemp. Fold the two pieces in half and tie a knot near the fold to create a small loop with 4 strands coming out of the knot. Having a loop at the end of the necklace makes it easy to pin or tape the end down while you are working. It will also be the loop side of the necklace closure when the necklace is finished.

The First Loop of Moana’s Necklace

Tie knots until you’ve created about 3 inches of the necklace. Then pull one strand away from the rest and continue tying knots, leaving that strand out. The strand that is left out will create the first loop. Tie knots with the remaining three strands until you have another inch tied. Then bring that separated strand back with the other and tie one more knot around all of them. You should have a nice loop. 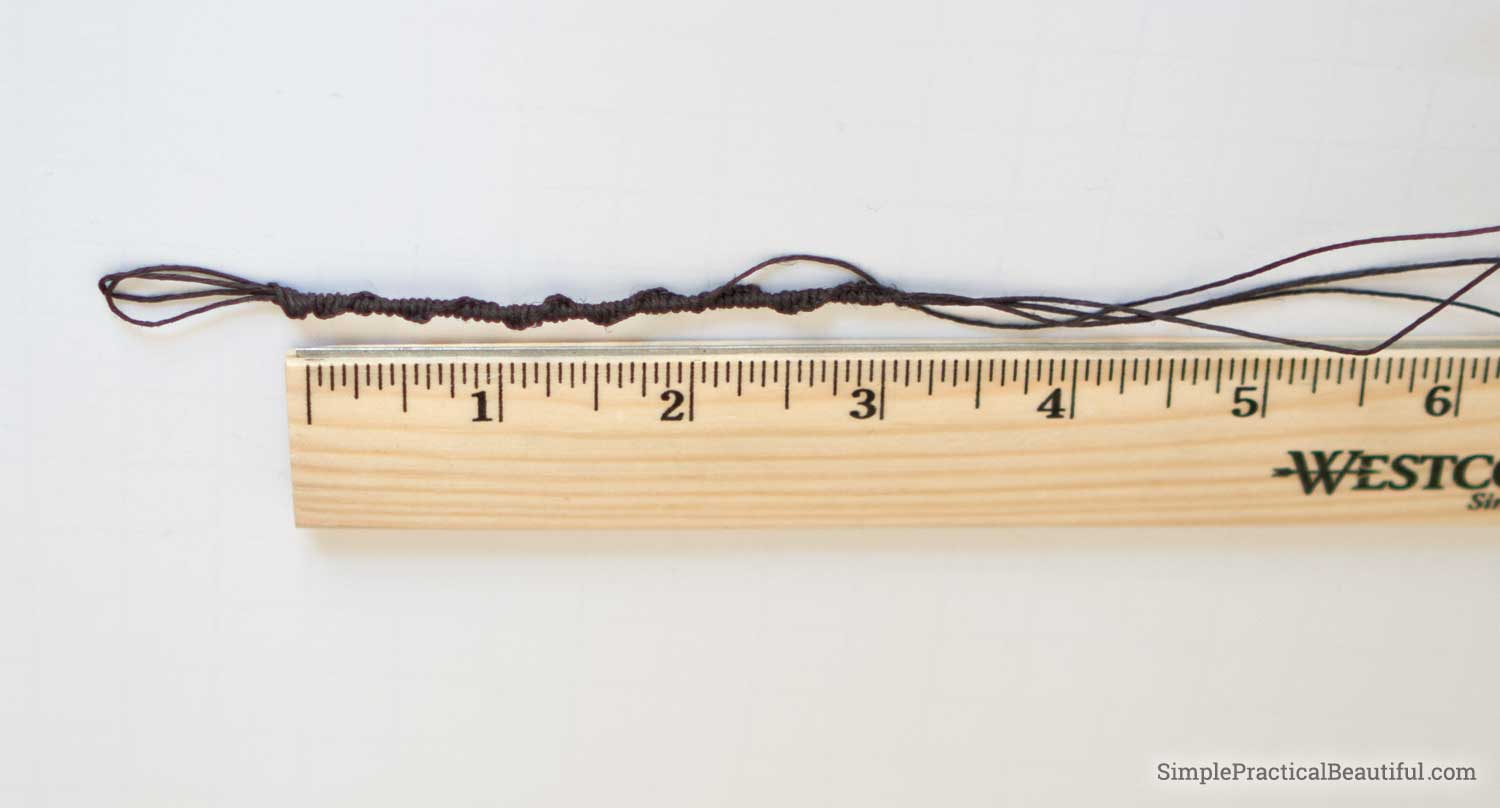 Now add a small bead and tie another knot to secure it. The next section is also about an inch long, but it will have two fringe pieces in it.

Those little fringe pieces all around the necklace are the only hemp parts of the necklace not made from the four strands of hemp that make everything else. I made the fringe using separate little pieces of hemp cord tied onto the necklace individually.

Use a piece of hemp cord about 2 inches long (It’s going to be cut off, so it doesn’t matter exactly how long it is). Fold it in half and lay it under the strands of the necklace with the end pieces up. 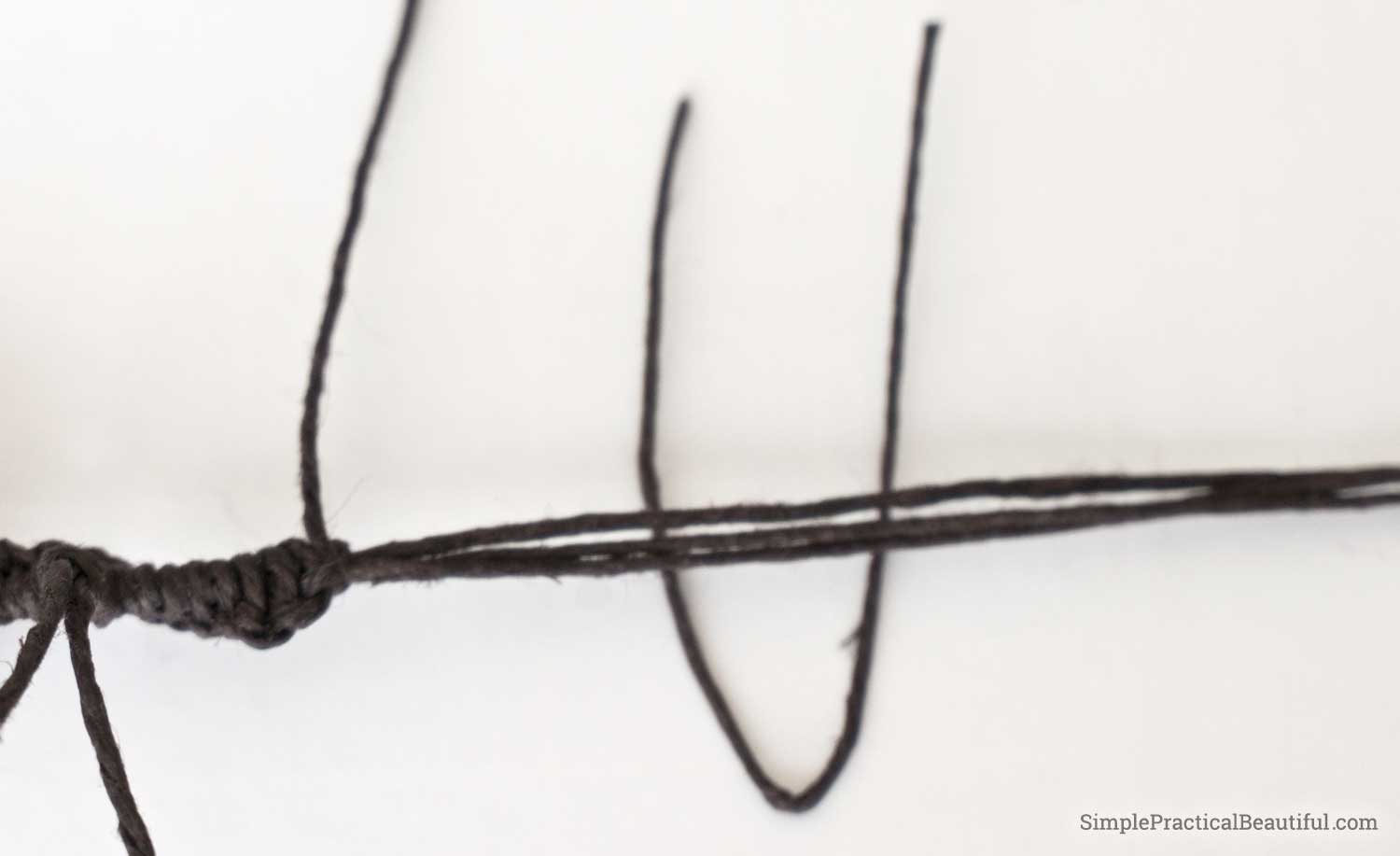 Pull the end pieces through the bottom loop around the strands of the necklace. Pull tight and slide into place next to the last knot you tied. Continue tying knots just like you did before the fringe piece. It will make a larger knot around the fringe pieces, but that will help keep it in place. 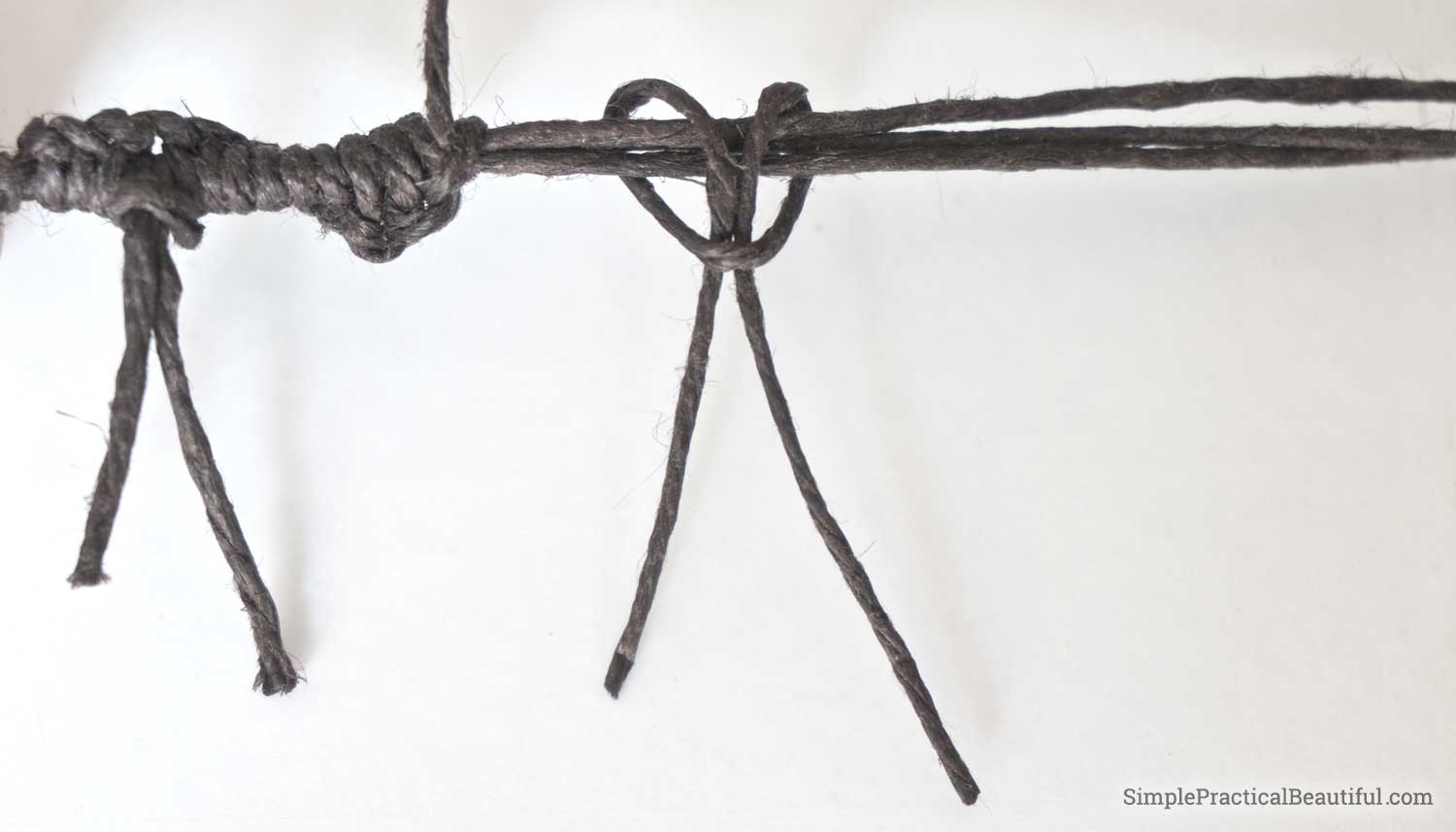 Right now, the fringe is longer than it should be. Don’t clip it off until the whole necklace is finished and shaped.

Add the largest bead, then take a breath and stretch your hands. This next section is the most challenging. This section has three parts which makes it a little complicated. The hard part, though, is that every time I tied a knot, it would pull at the loops, and I would have to reshape them. My only tip to help with that frustration is to push the knots tight with your fingertip instead of pulling them tight with the strand of hemp. (Also, my pictures don’t have the large bead on the necklace, so don’t let that confuse you.) 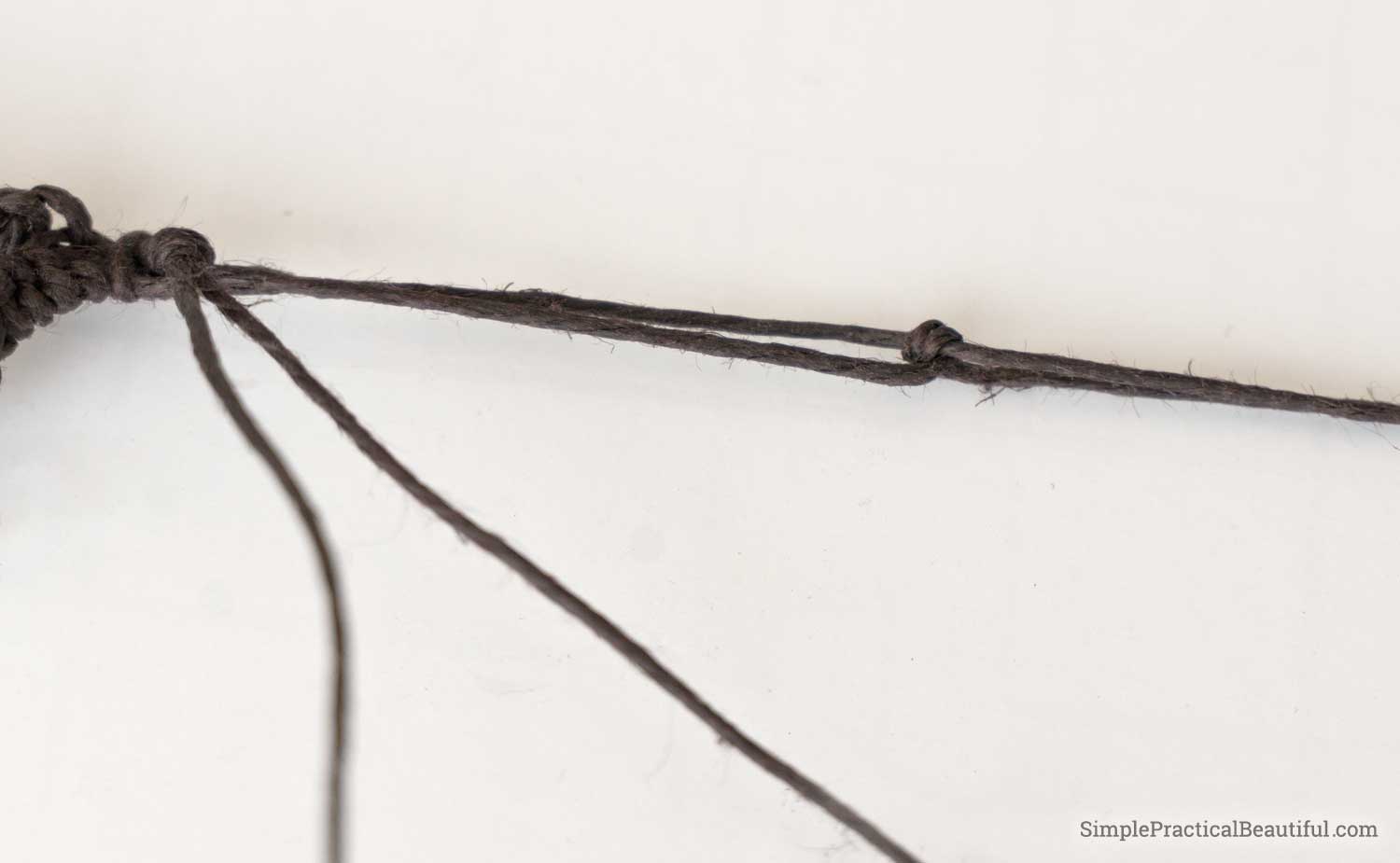 Next, take one of the strands you set aside and lay it across the knot. This strand will make the bottom loop. Take one of the strands from the knot, and tie it around the loop strand. I made the loop really big and then pulled it tight after I was finished tying knots on it. I also taped down these first two knots to keep them right next to each other and in place. So, to rephrase it, pull the loop strand really big (like 6 inches) and start tying knots on it. You should still be able to adjust the loop because the knots tie around it. There is also one strand from the large bead that we are just ignoring for a while. 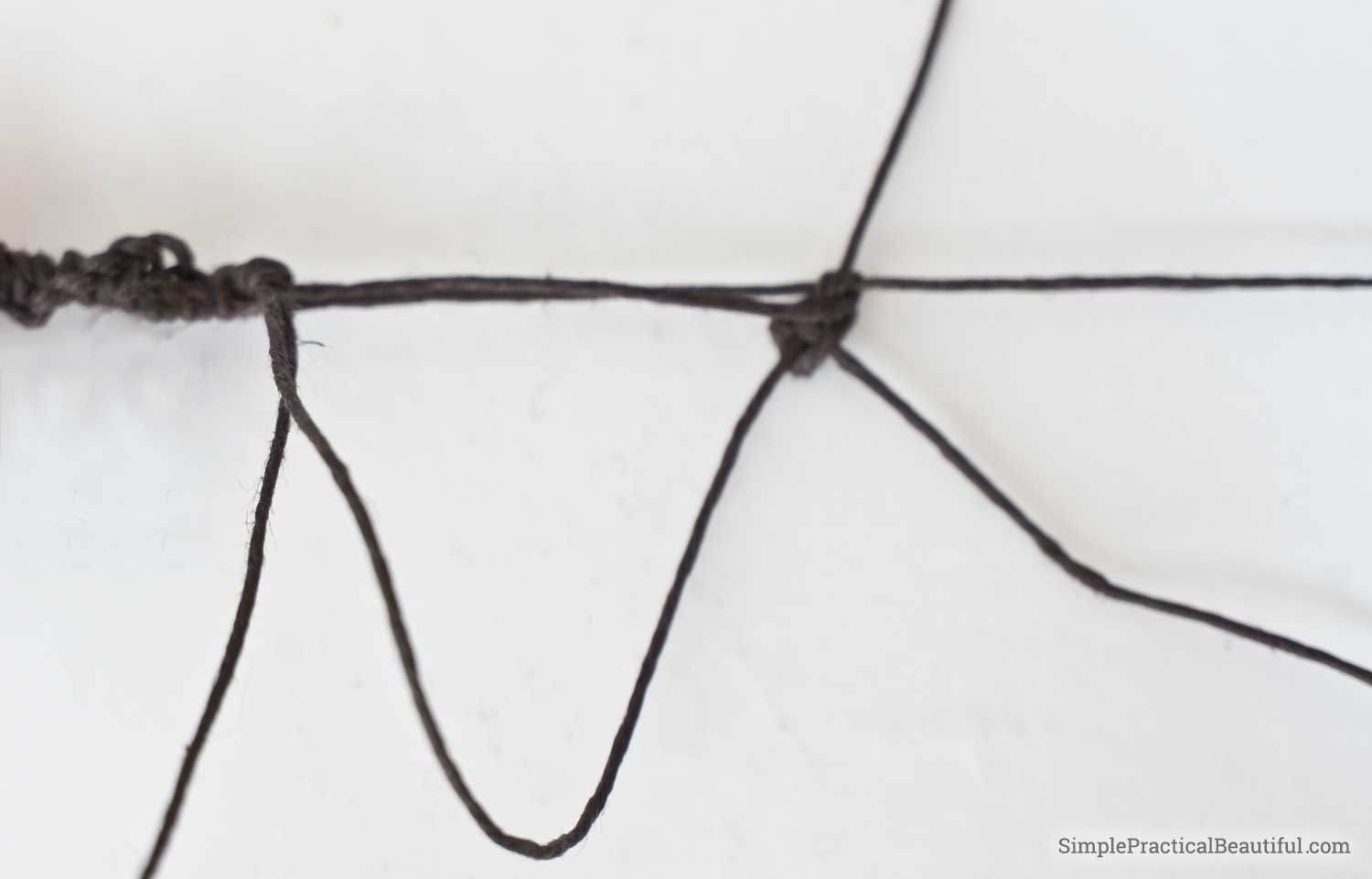 Tie knots on the loop until it is about an inch and a half long with three pieces of fringe through that inch and a half. Once the loop is all tied, pull it tight so that it connects with the large bead. 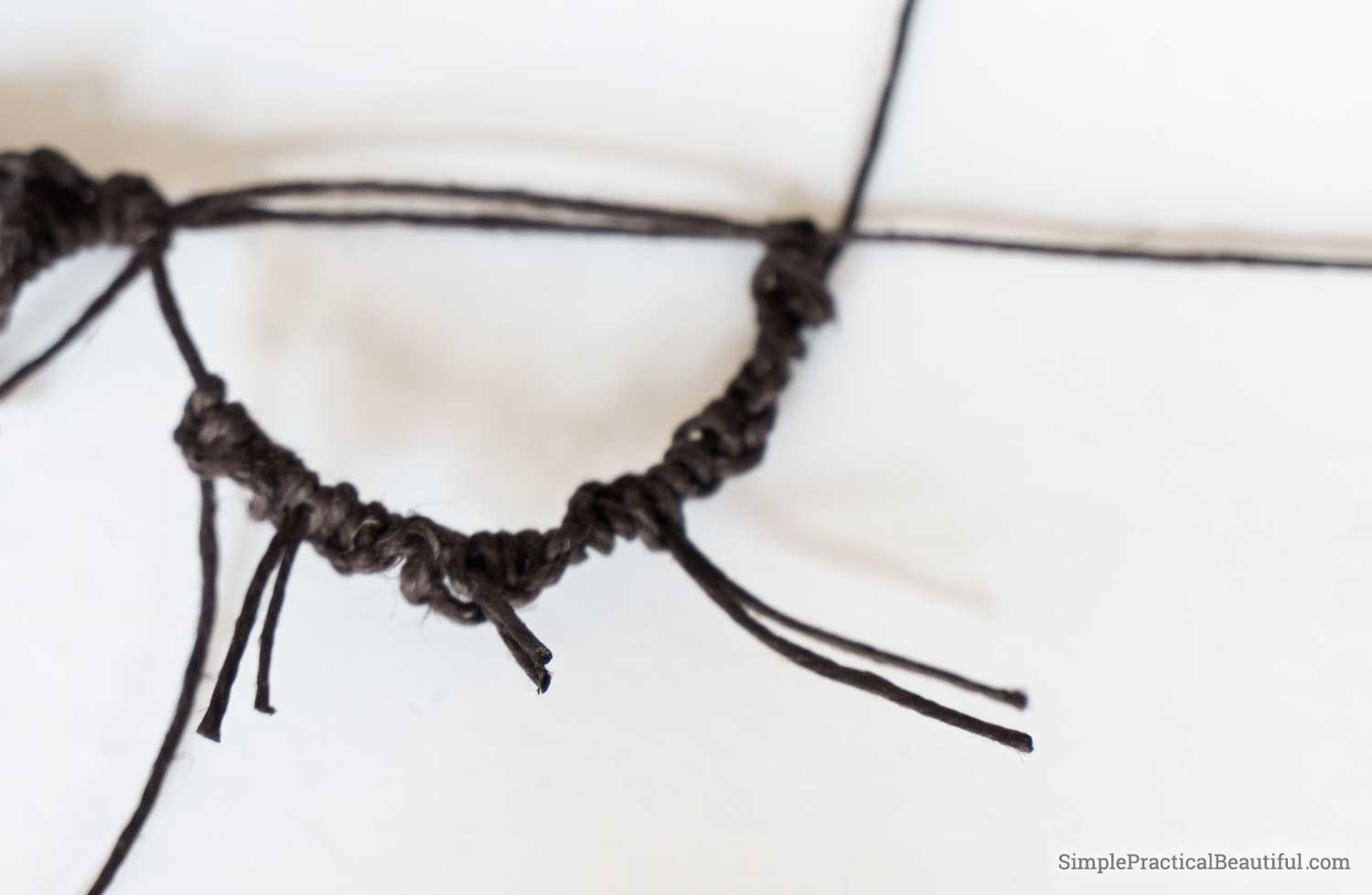 Now use the same strand you used to tie knots on the loop to tie knots on the main necklace, that inch that we left blank earlier. Tie knots all the way until you reach the beginning of the loop. This is a little tricky because the space is tight between the necklace and the loop. 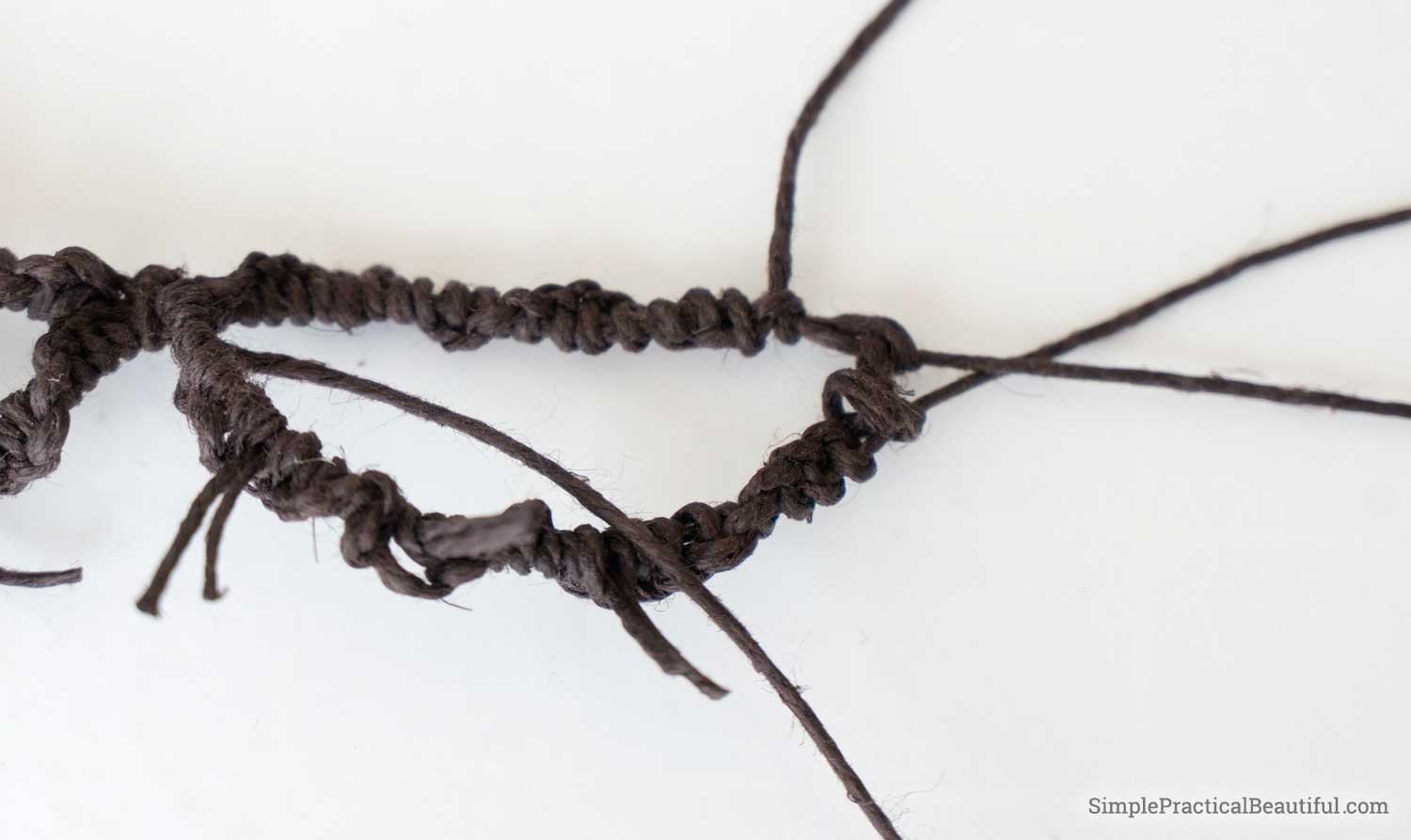 Once the loop and the main necklace part are finished, it’s time to add the second loop. Take that last strand that you separated out at the beginning of this step and tie it on the other side to make the second loop.

With all four strands back together, I wanted to secure it so that neither loop would be pulled too tight or too loose. So, I took two strands in one hand and two in the other and tied a knot. Since all of the strands are in the knot, none of them can be pulled loose.

The Loop with a Bead in the Middle

This loop is very similar to the last one, even a little easier. First, pull one strand off the side. That strand will be the loop. Now thread a medium-size bead onto the three strands. Measure about an inch from the last knot, and tie another knot. The bead is going to be in the middle of that knot, but it’s just going to hang out there for a while because first you need to make the loop. 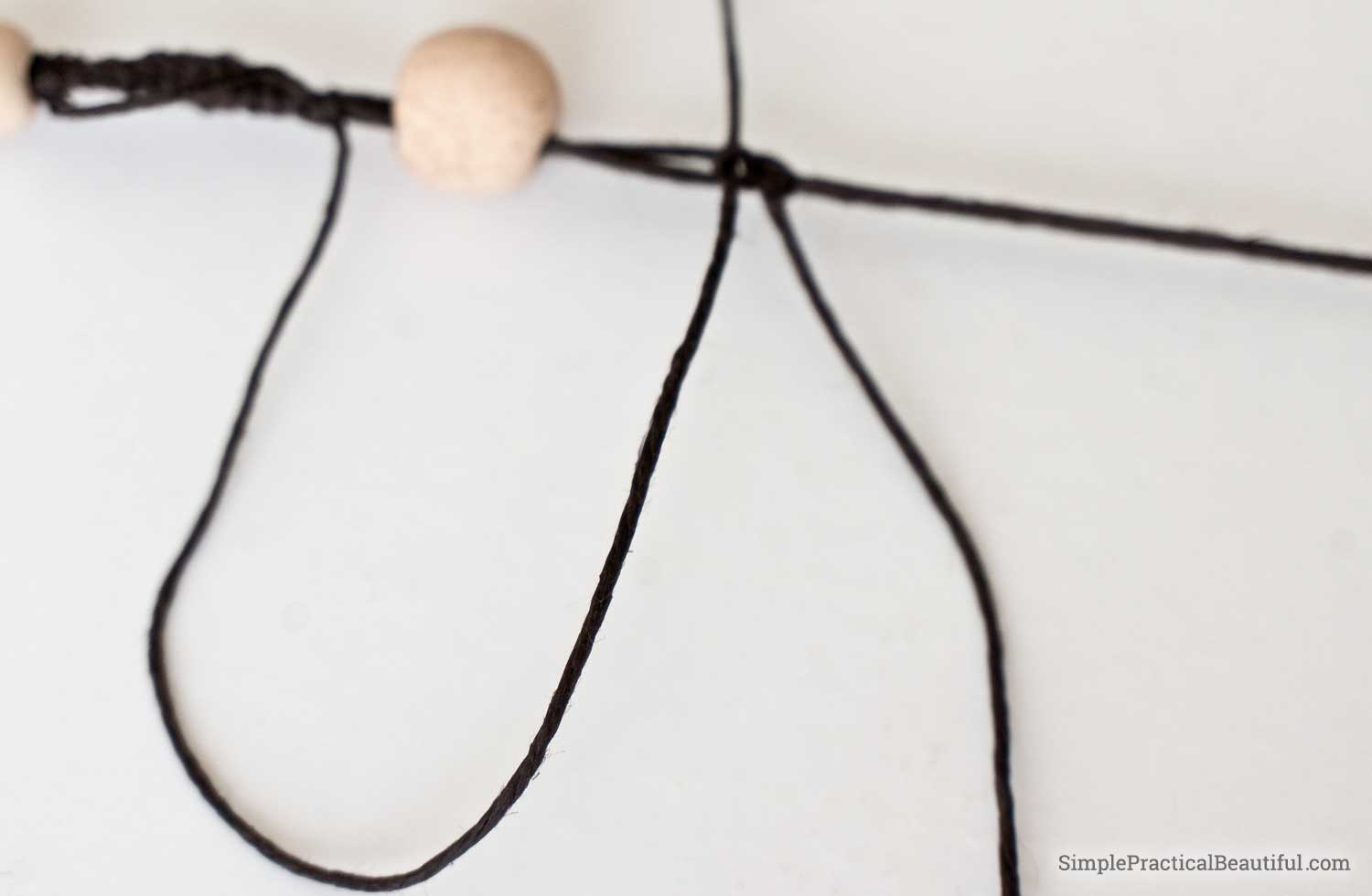 Just like last time, take the strand you set aside, and cross it over your knot. Now take another strand and start tying it onto that loop strand. Pull the loop strand long and tape it down if you want. Again, tie knots along the loop strand for about an inch and a half with three fringe pieces on it. 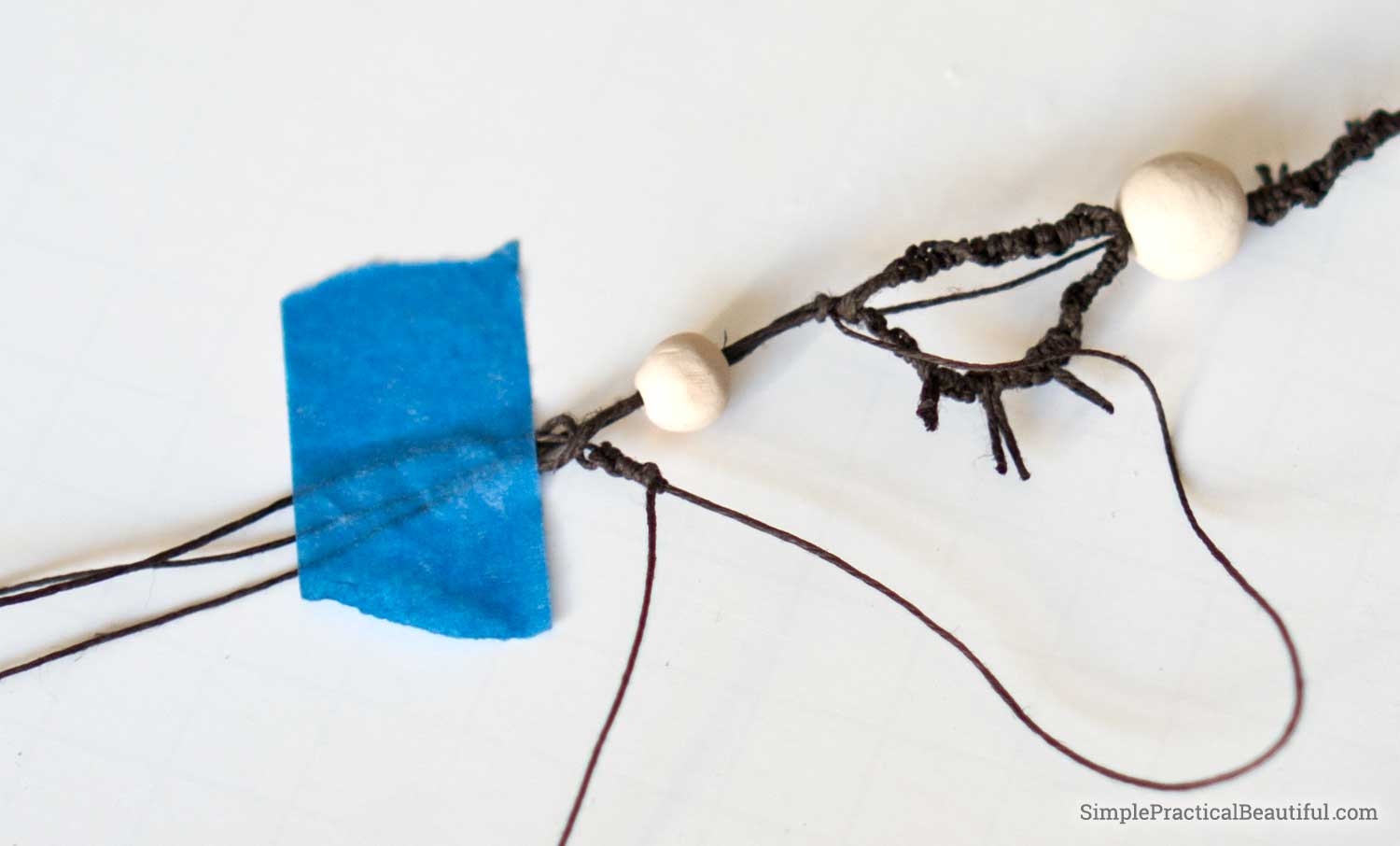 Pull the loop tight when it’s all tied, and start tying along the main necklace part. Tie for about a third of an inch, then push the bead that on the strands (and always in your way) up against the knots. Then start tying again on the other side of the bead. A small strand of hemp with cross the outside of the bead, but it won’t show much. Tie knots until you reach the beginning of the loop. 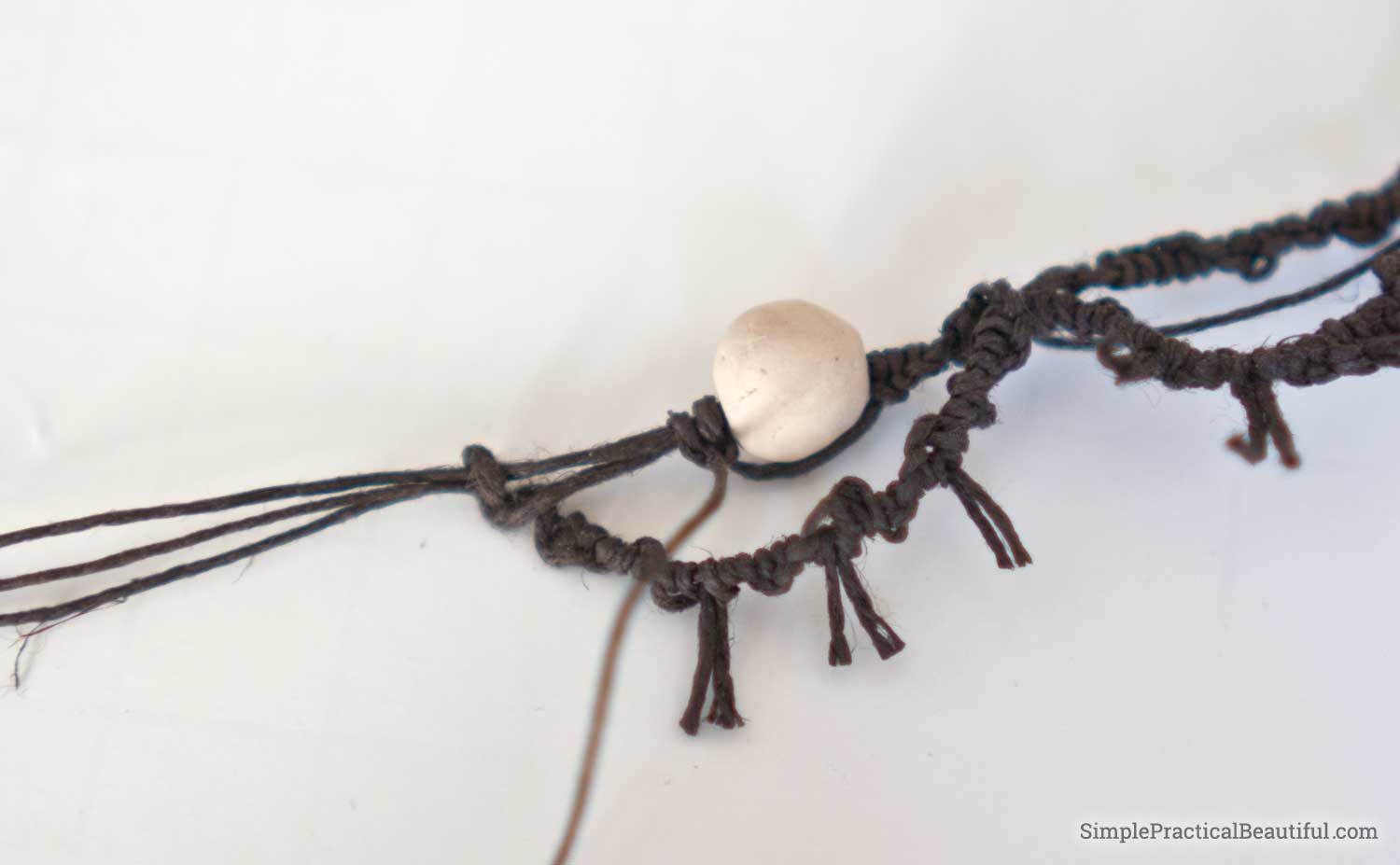 Once again, so secure the loop, I took all four strands, two by two, and tied them together.

This loop is just like the first one. Put one strand off to the side, then tie knots with the remaining three strands until you have about a half an inch. Pull all the strands together and tie one more knot. Then add a small bead.

Tying the rest of the necklace with a large locket or charm on it would be a pain, so instead of adding the locket, I just added a jump ring for the locket to connect to. I didn’t attach the locket to the jump ring until the very end. 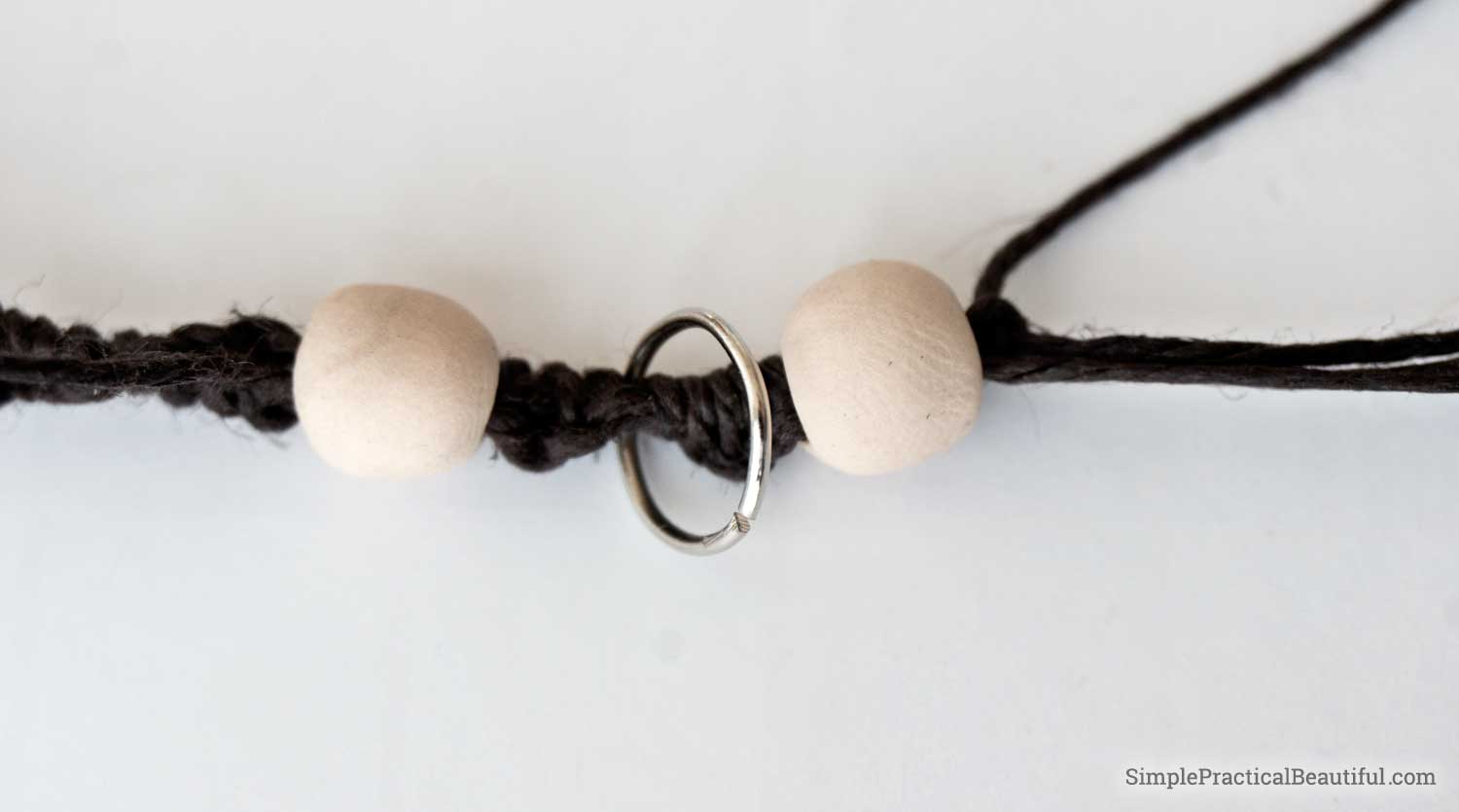 Tie knots for a quarter of an inch. Thread the jump ring onto the three strands that are together and continue tying knots. This section should be about half an inch long. Add another small bead.

The Second Half of Moana’s Necklace

Once you finish adding the final loop, tie knots until the entire necklace is 16 inches long. 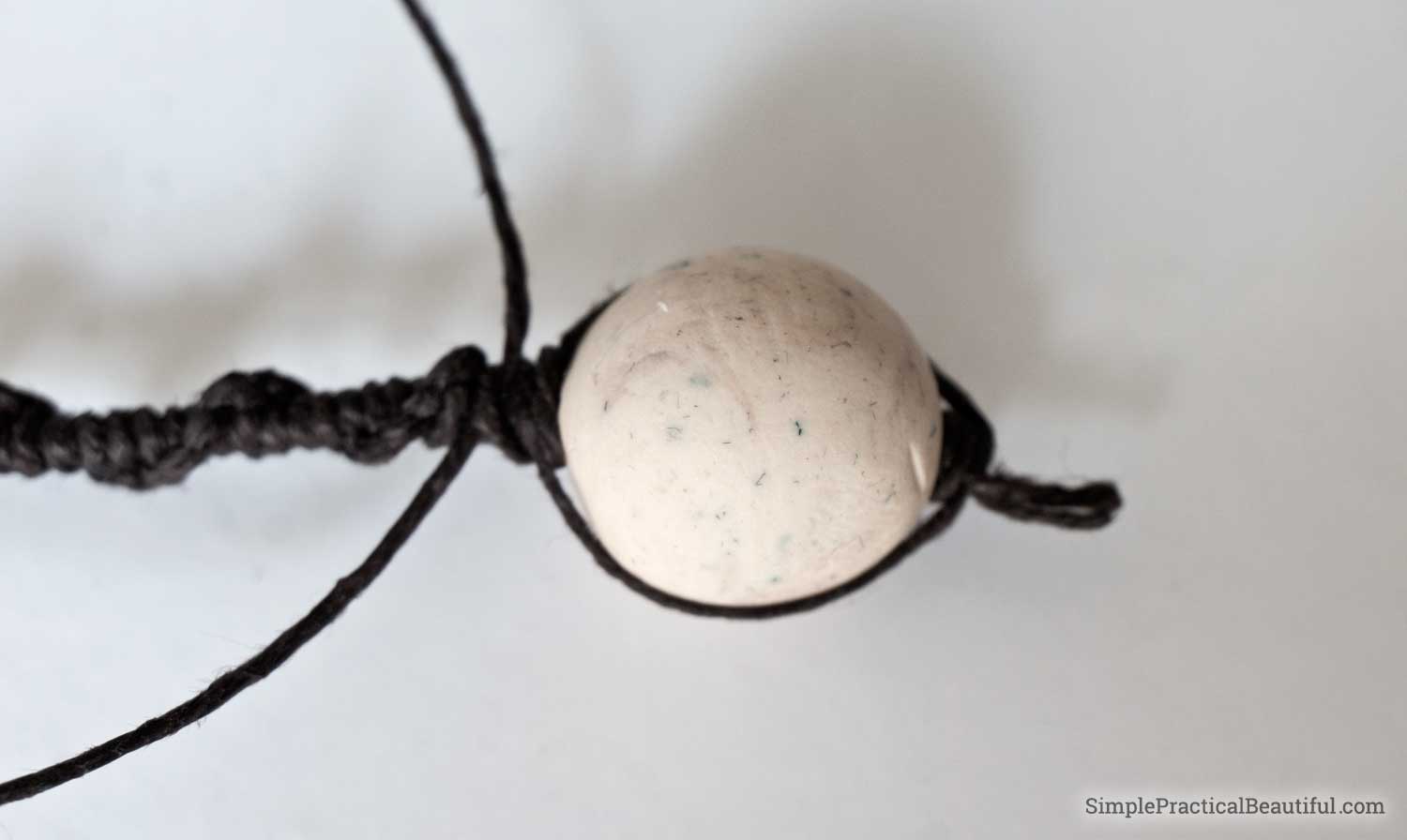 Thread the bead through all four strands of hemp, then tie a tight knot with all four strands at the end of the bead. Cut off two of the strands. Take one remaining strand and tie it on the other side of the bead. Do the same with the last strand. I wanted to make them really secure, so I tied the two strands together a couple of times, then wrapped them around the necklace again and tied them some more.

Soak the hemp necklace in water (using seawater is optional:). Pat it dry with a towel. Bend, stretch, and shape the necklace to make all of the loops hang down the right way and all of the fringe point down. Pull each fringe tight so secure it better. Lay the necklace on a towel slightly curves and let it dry overnight.

Once the necklace is dry, clip the fringe to the right length and add the locket to the jump ring. 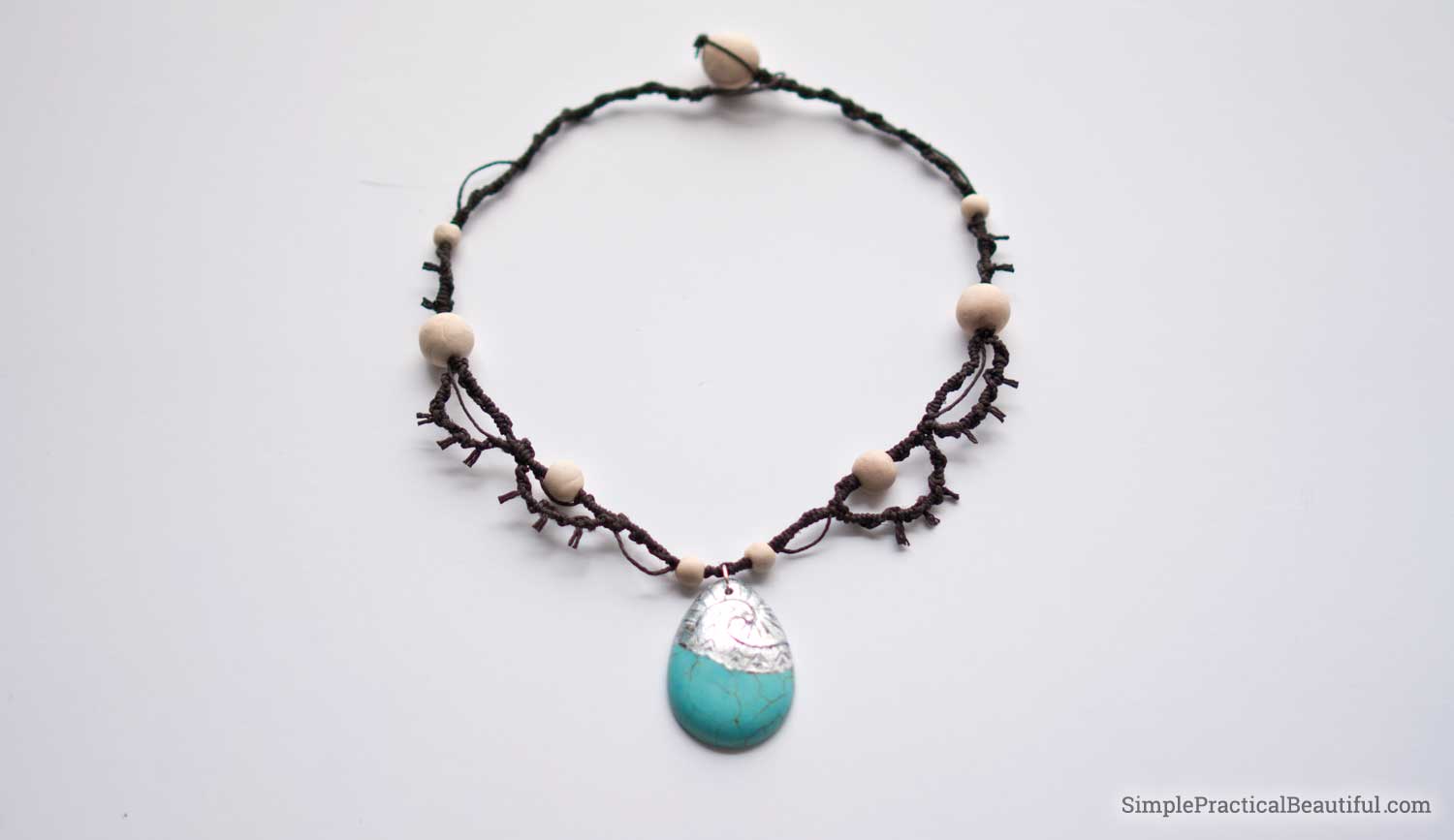 If you’d rather measure in centimeters than inches, here’s how long each section of the necklace should be in Metric.

Making the Beads for Moana’s Necklace

The beads on Moana’s necklace in the movie look very rustic and irregular like they were shaped by hand. So we made our beads from Sculpey clay. We shaped lots of small, medium, and large beads. The smallest was about a quarter of an inch, the largest about half an inch. We made a lot so that after they baked (15 minutes per quarter-inch), we could choose pairs of beads without flaws because both sides of the necklace need to match. 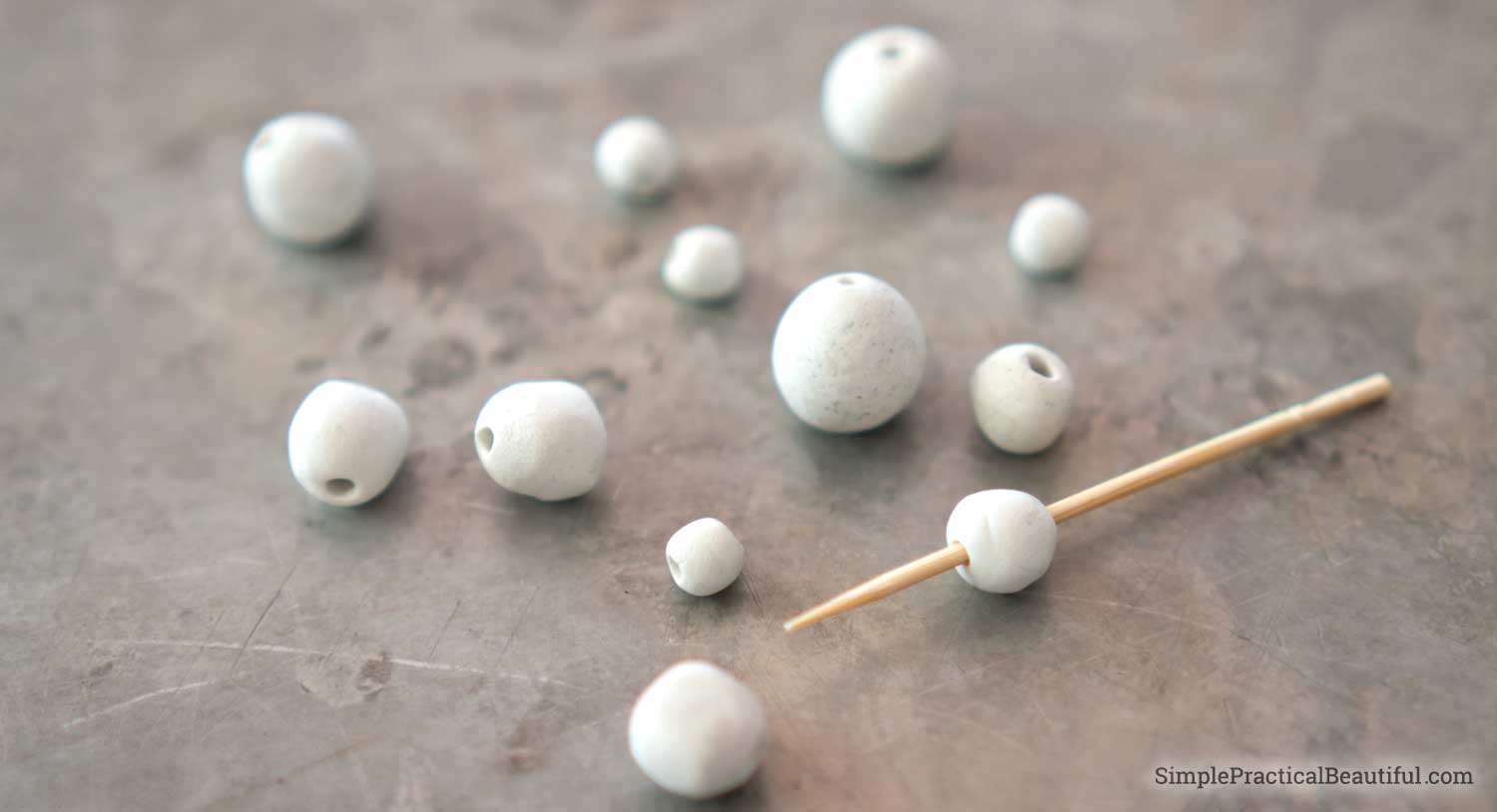 We made holes in the beads with a toothpick. That was large enough that four strands of 10 lb. hemp easily fit through the hole.

Jane loves her Moana necklace and can’t wait to show all of her friends. 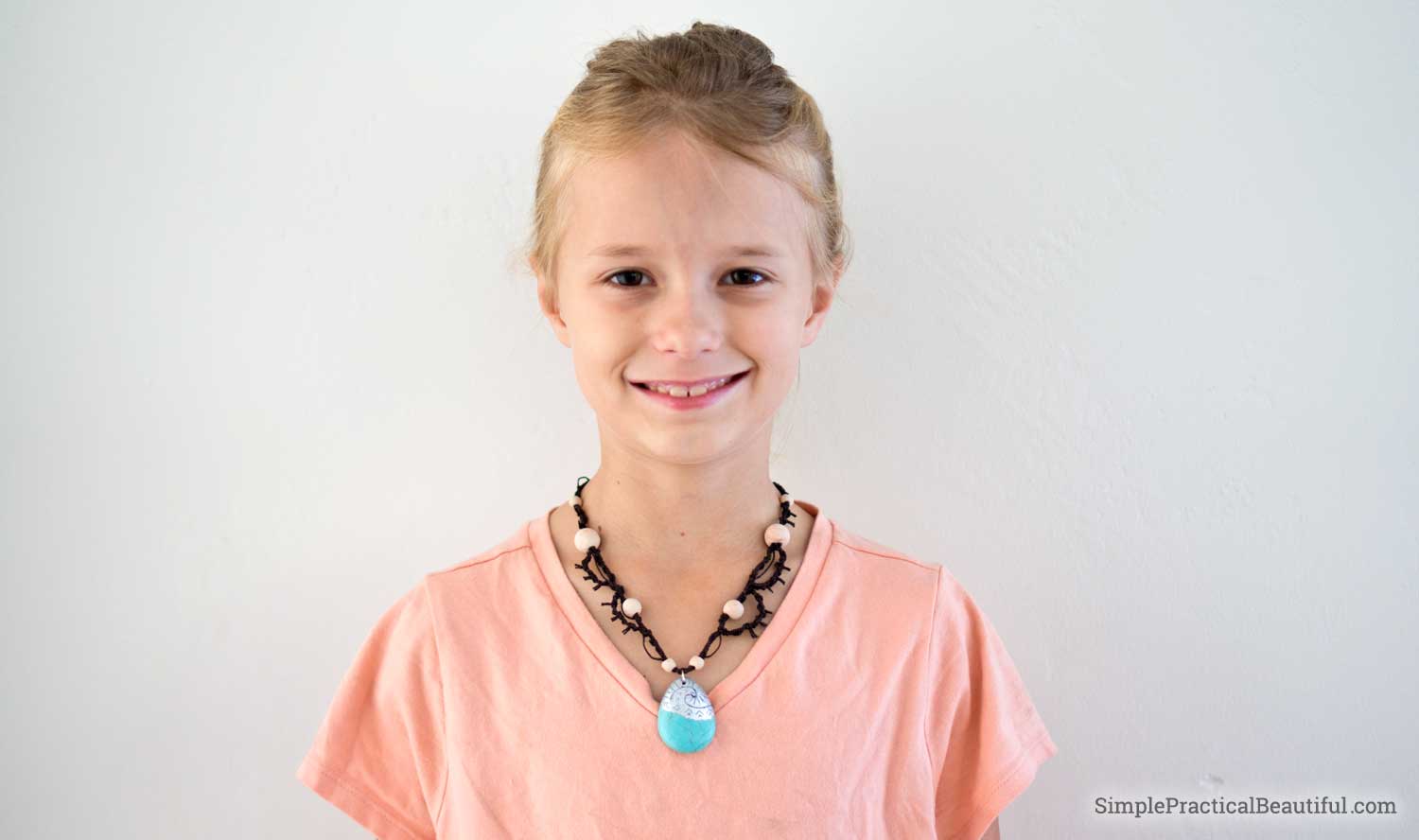 Here are some more Disney-inspired ideas from other bloggers: