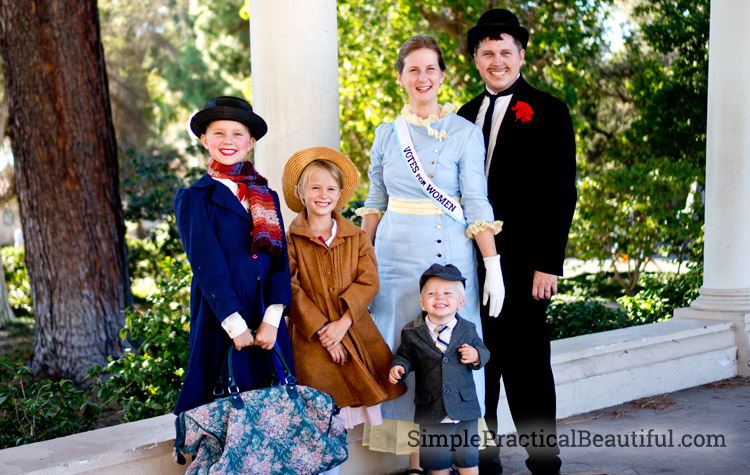 A Mary Poppins family costume is practically perfect in every way. Learn how to make a costume for each of these fun characters. 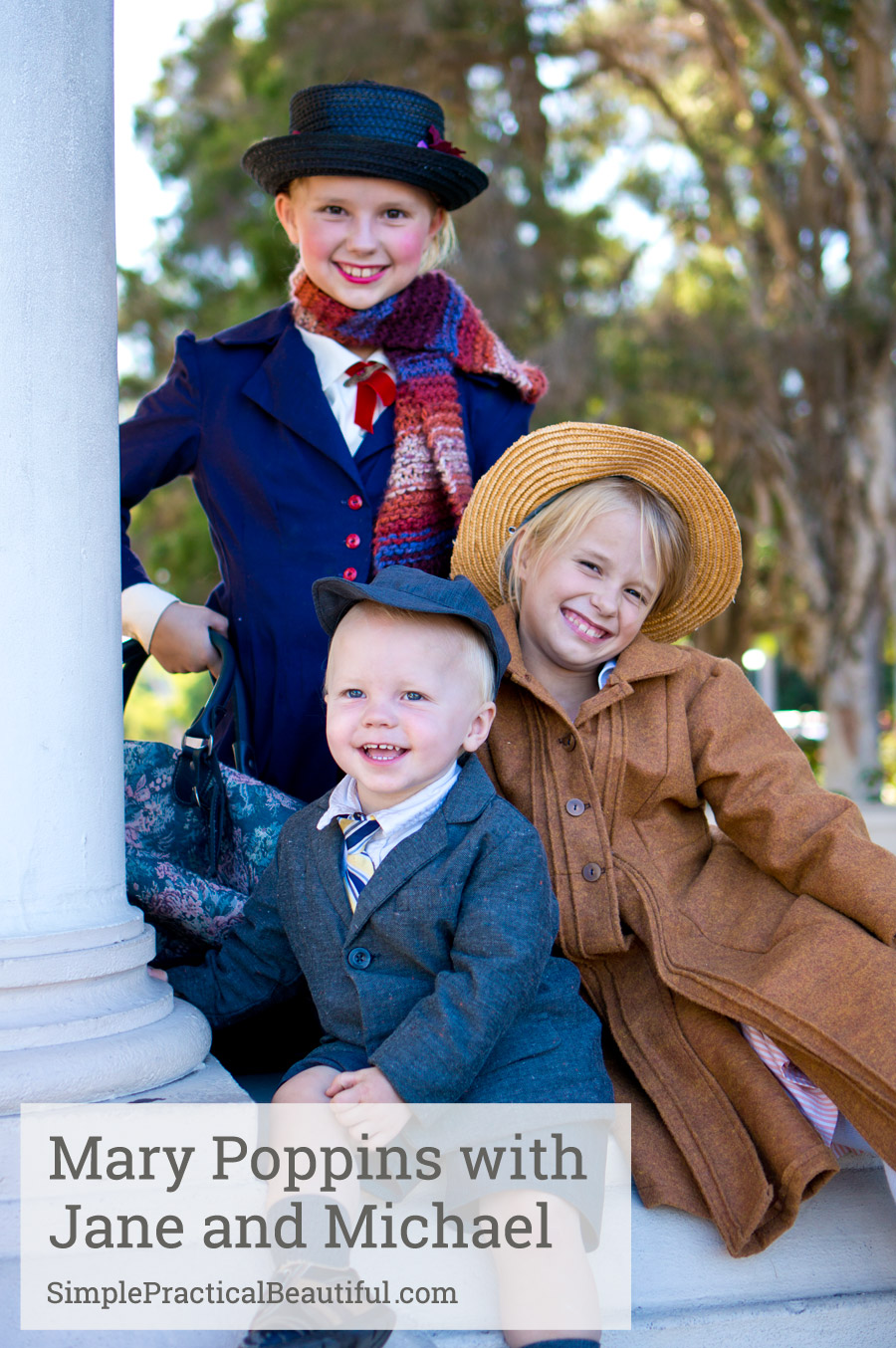 I’m so excited to share our Halloween costumes from last year. We had a lot of fun sewing and creating these costumes then dressing up for Halloween parties and trick-or-treating. Here’s our cast of characters: 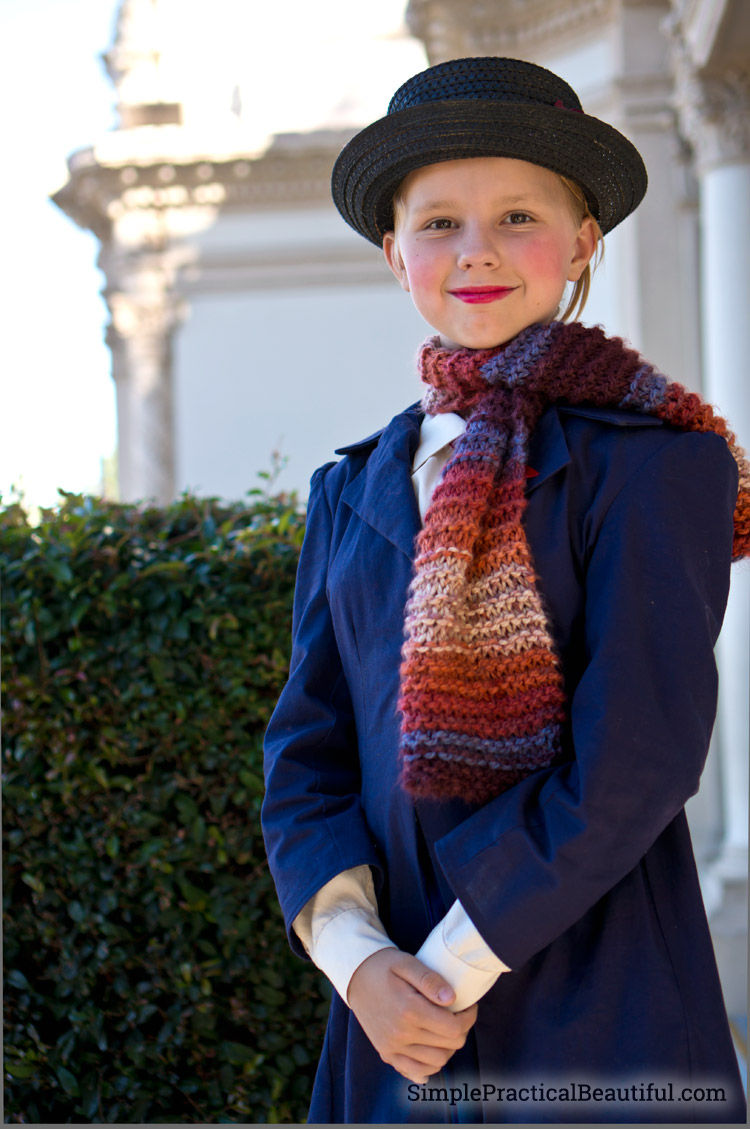 My oldest daughter made the a perfect Mary Poppins because she has the imagination to make any task fun and exciting. Plus she’s practically perfect in every way. 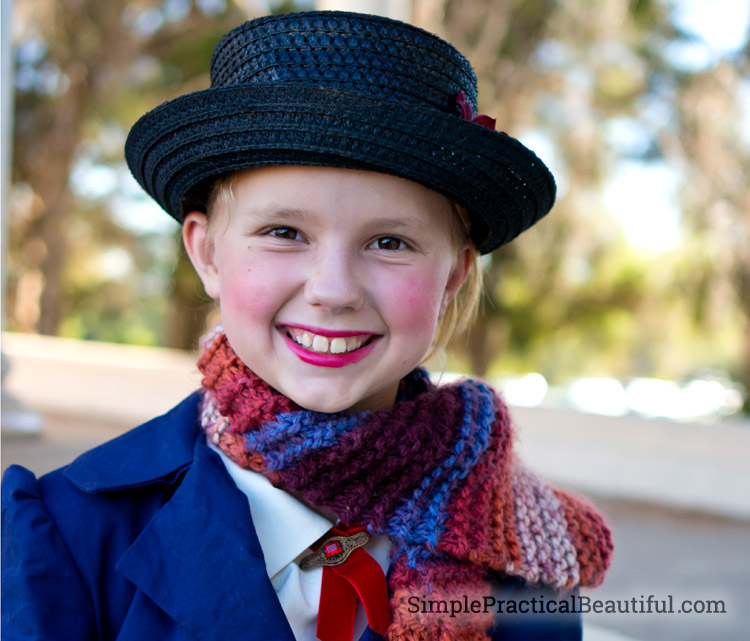 We already owned the white button-up shirt and added a red ribbon with a vintage pin for the tie. I knitted the scarf using multi-color yard. Scarves happen to be the one thing I know how to knit. 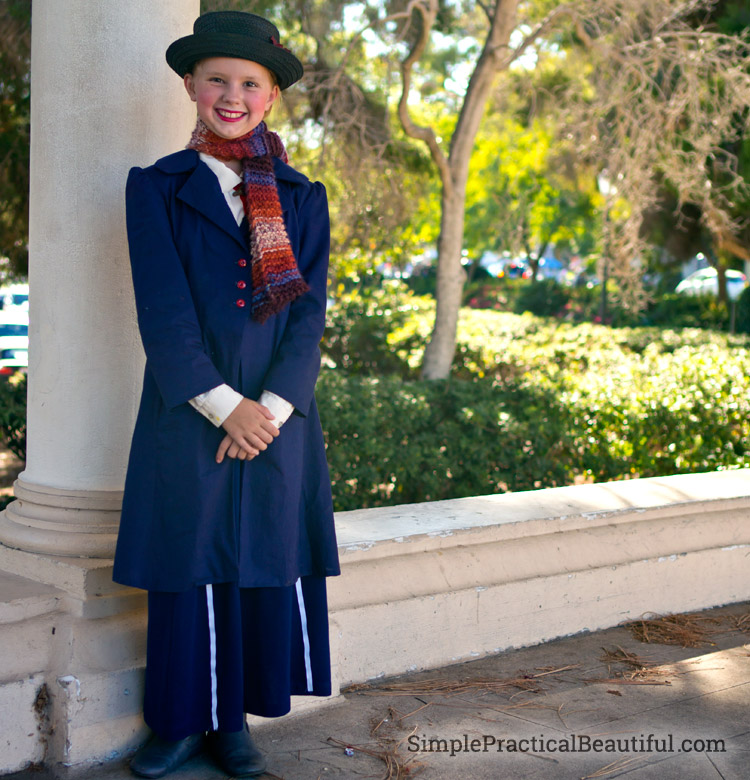 Mary Poppins overcoat is the signature part of her costume, so we wanted to get it right. We found a pattern for a simple jacket and I cut it down to fit my 10-year-old. You can read more about that in How to Alter a Pattern. 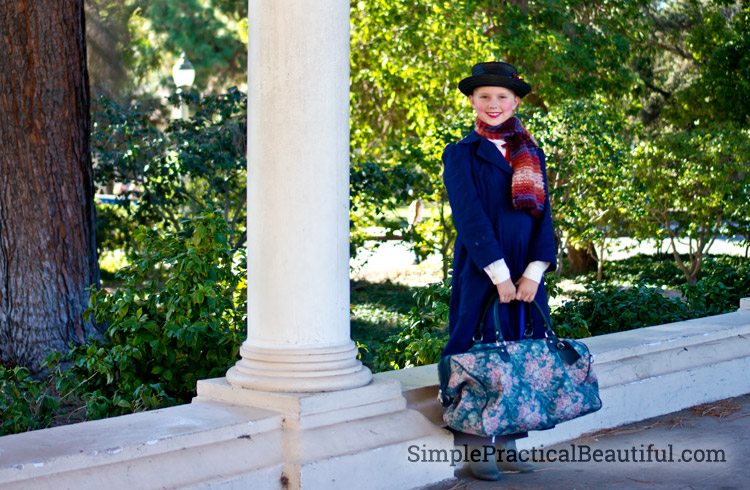 She also carried around a large carpet bag. It was heavy, but that girl understands the value of a large bag when trick-or-treating. 😉

My younger daughter, Jane, came up with the idea for our family costume for obvious reasons. Jane is a fun character, and my Jane is just as sweet and charming. Plus, I think “Extremely Stubborn and Suspicious” kinda fits my Jane too. 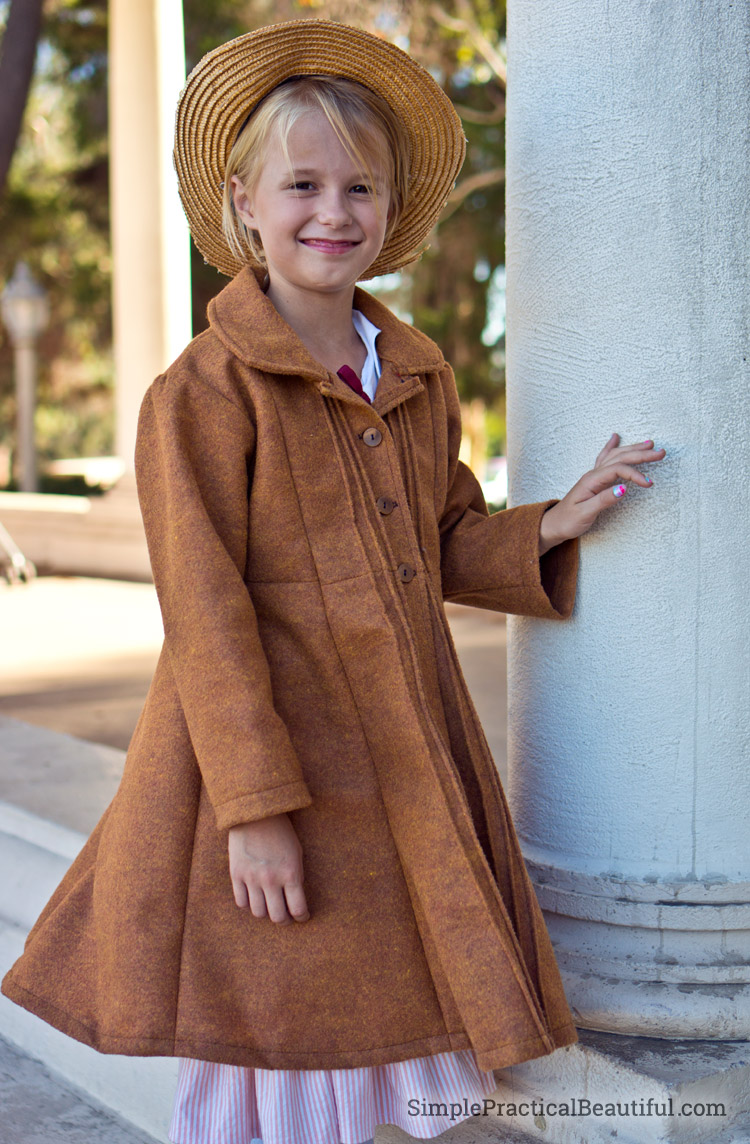 To make her costume we found a little girls pattern with a drop waist, McCall’s 7233. That drop waist is the main feature of the Jane costume. It wasn’t too hard to find a peach fabric for the dress. Jane in the movie has a long-sleeved dress, but my daughter opted for short sleeves. Halloween in southern California can be warm. 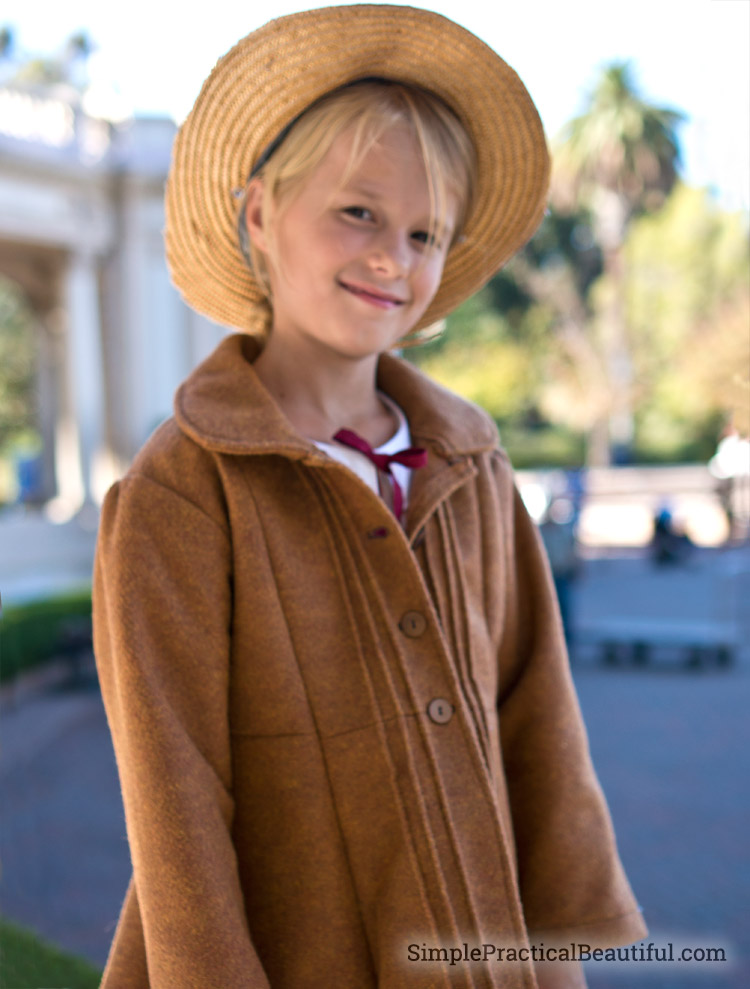 Jane’s overcoat is also an important part of her costumes. Luckily we found a pattern that looked very similar, Butterick 5946. I just added the stripe detail on the front. I used felt for the fabric. The felt was a little stiff, but it looked just right when she wore it. 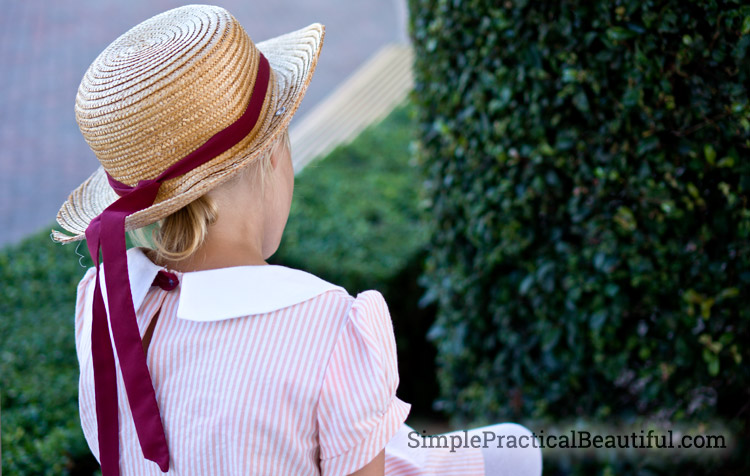 Jane’s hat came from a thrift store. It was a large sunhat that we cut down to be the right size then added the ribbon. You can see that the brim of the hat is starting to fray, but it lasted well enough through the week of Halloween. 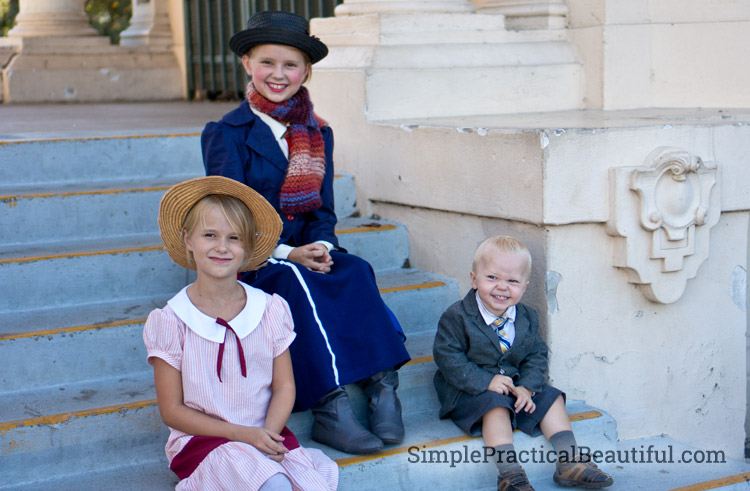 My toddler made a pretty cute Michael. Especially with his dark socks pulled up high. 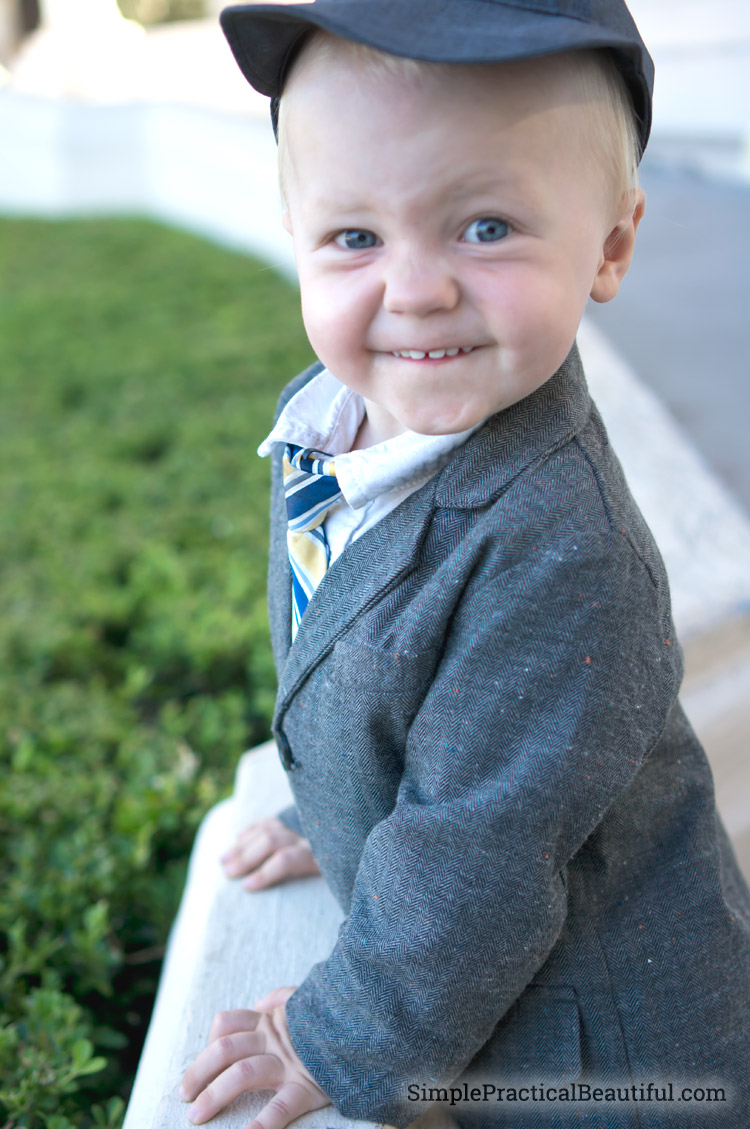 Making Michael’s costume was very simple. I found a little boy’s suit at Target and used the jacket. We already had the white shirt and tie. 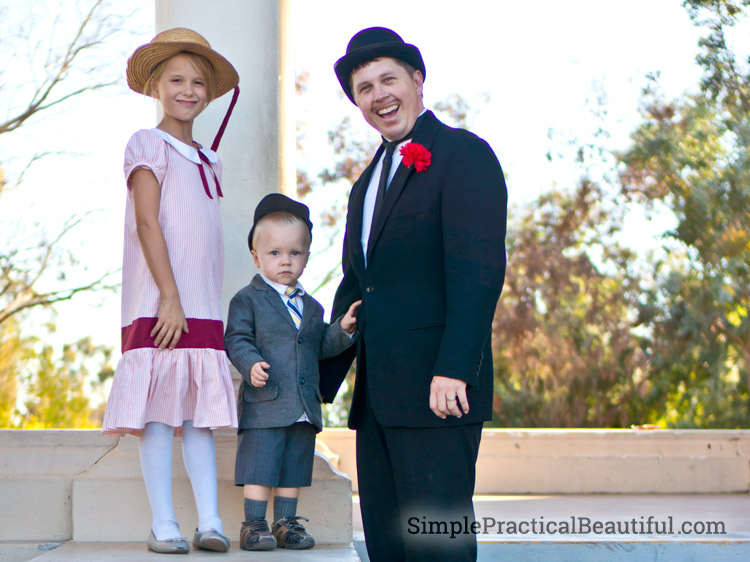 I sewed the shorts and hat from a fabric similar to the jacket. I made the shorts from a pattern. The hat I kind of made up. It didn’t turn out very well, but most of the time my toddler refused to wear it anyway. It almost wasn’t worth making. 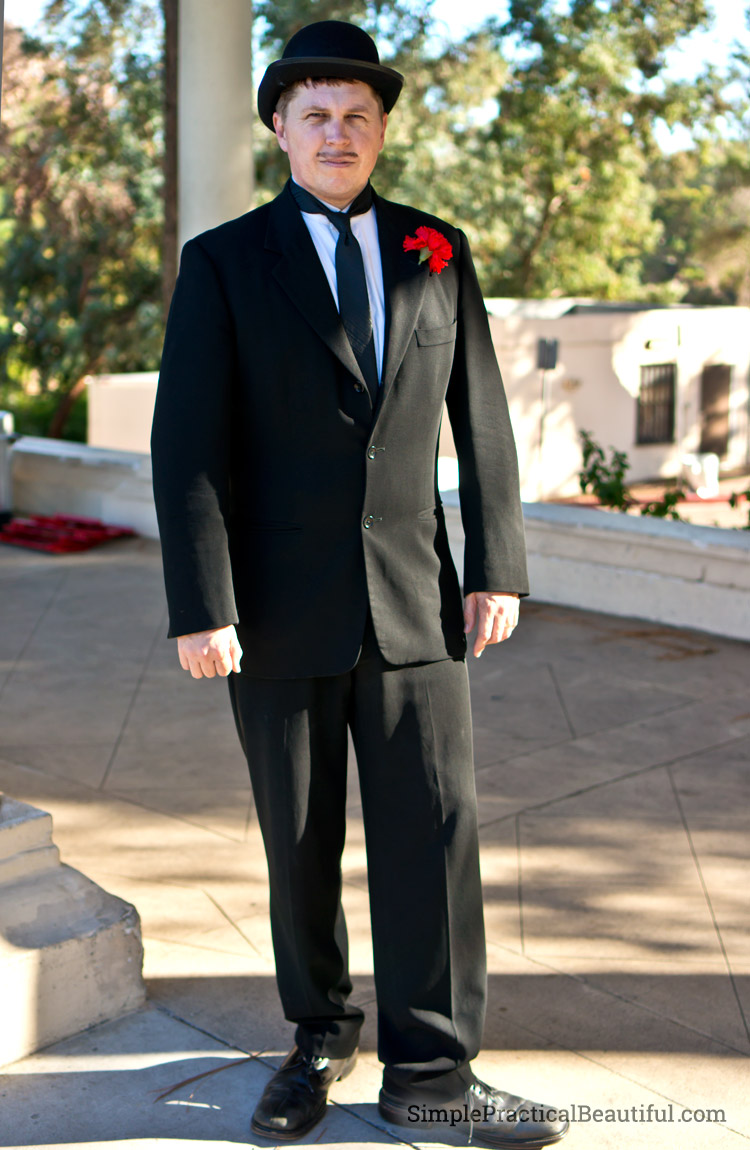 My husband’s personality fits the character of Bert much better than Mr. Banks, but he kindly went along with me so I could be Mrs. Banks.

Like Michael, Mr. Bank’s costume was pretty easy. We already owned the black suit, white shirt, and black tie. I bought a fake carnation from Michael’s silk flower department and clipped it off to fit into the suit button hole. The mustache is brown eye-liner pencil. 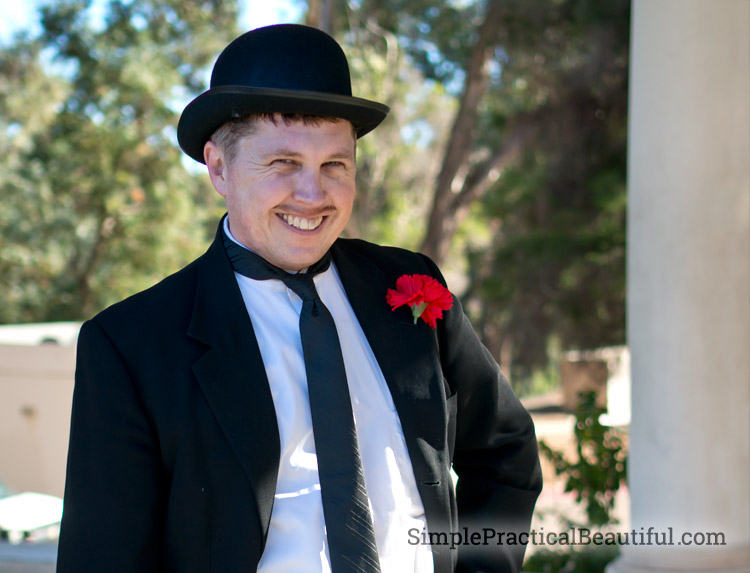 The bowler hat we bought from  Amazon. We will probably use it in the future as part of a steampunk costume because we had so much fun with steampunk before. 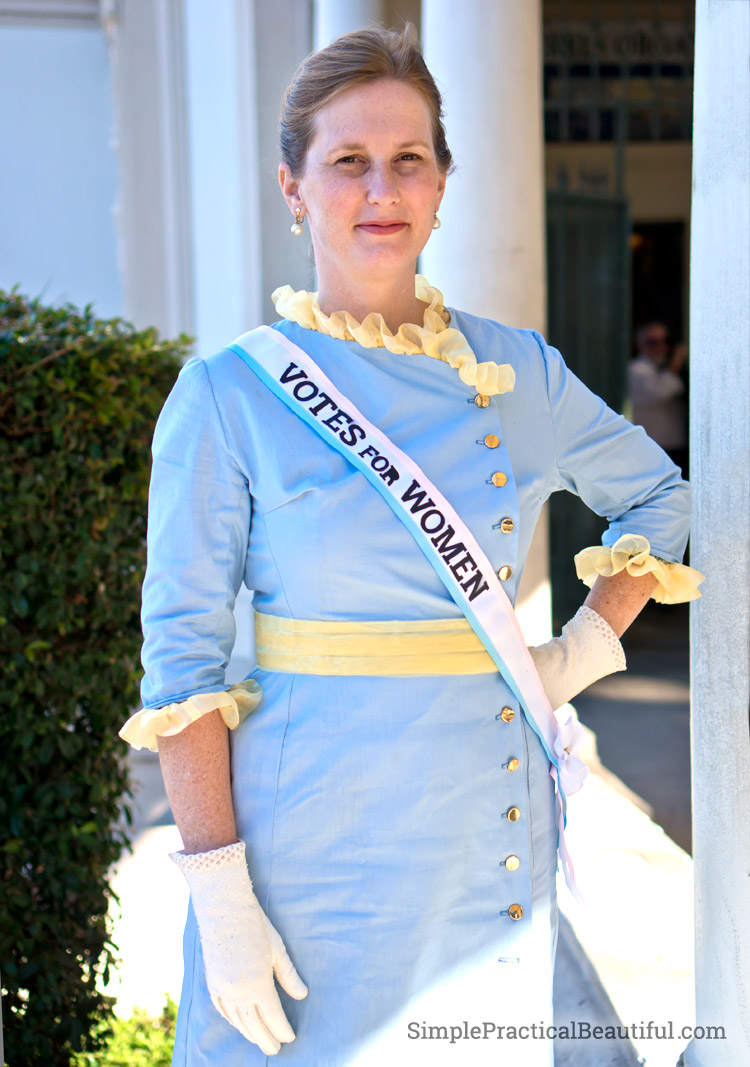 I love this character, and I probably relate to her a little too much. I can be scatterbrained at times. And I really relate to needing an interest or a cause outside of my family. But family always comes first.

To make Mrs. Bank’s costume, I found a pattern for a jacket that was similar enough to her dress. You can read more about it in my post on How to Alter a Pattern. I also made a yellow underskirt to go beneath the jacket.

The “Votes for Women” sash is my favorite part of the costume. I bought a 2” white ribbon and sewed skinny 3/8” lavender and blue ribbons on each side. I tried to find iron-on letters for the words, but I couldn’t find any that I was happy with. Instead, I printed out a stencil of the words and drew them on with a permanent marker. And accidentally colored in the letter “R”. Whoops. 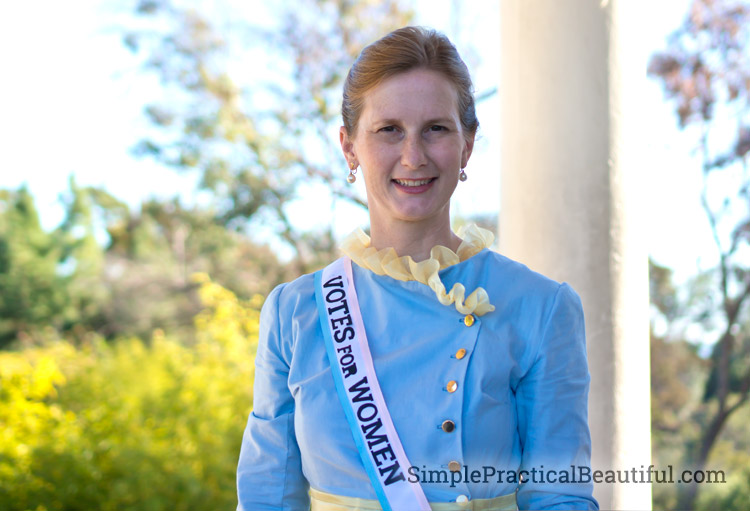 I really tried, but I couldn’t get my hair as full and poofy as Glynis Johns in Mary Poppins. I guess it’s because I didn’t live through the sixties. However, I have a cute pair of gloves and earrings to finish off the costume.

Taking Pictures of our Family Costume

We’ve recently started to try to take pictures of our Halloween costumes each year in the appropriate setting. We found the perfect spot this year at Balboa Park’s Organ Pavilian. It may not have had the fog and gloom of London, but the columns and architecture were perfect.

Have a happy Halloween this year. And if you can, take some time to go fly a kite! 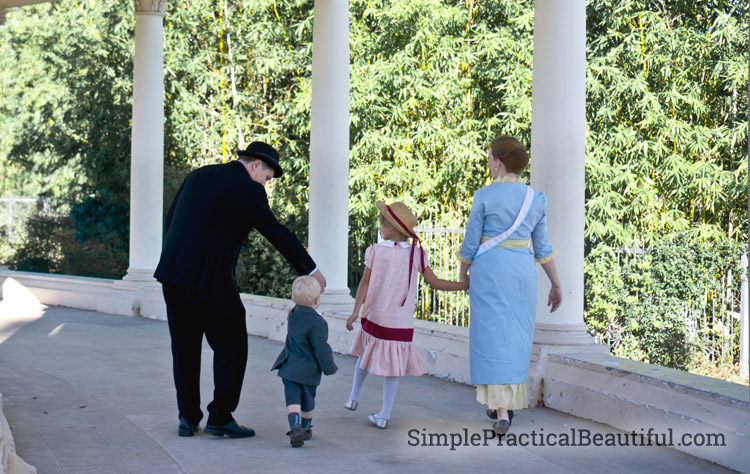 This post was shared at some of my favorite link parties.