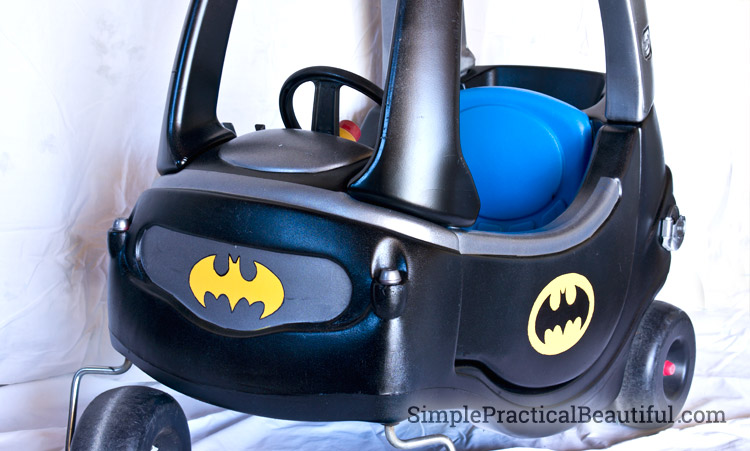 We transformed a Little Tikes play car into a toddler Batmobile for my son’s 2nd birthday. His sisters even updated their Barbie car into a Batmobile too, so be sure to check that out at the end of this post.

My toddler loves batman. He can recognize the bat symbol anywhere. Obviously, he’s never seen the movie, but he does watch our family Batman movie all the time. You can click that link to see it on YouTube (and yes, that’s me as Poison Ivy). 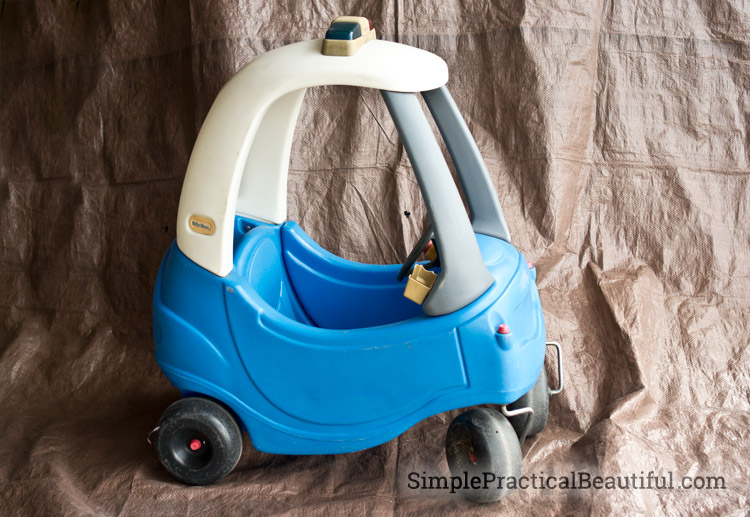 A friend gave us an old, faded little tikes cozy coupe. Cute and fun, but it had so much potential to be something more, like a toddler Batmobile.

We started by taking by taking parts off the car (make sure you remember which screws go where), and then covering and taping off parts that wouldn’t be painted. The wheels were fine, so we covered those in plastic bags. We covered the blue seat with painter’s tape and newspaper. We figured the seat would get a lot of movement and rubbing, so we didn’t want to risk any paint rubbing off onto my toddler’s pants. His pant already get enough wear and dirt. We also removed the police lights on top and the steering wheel. 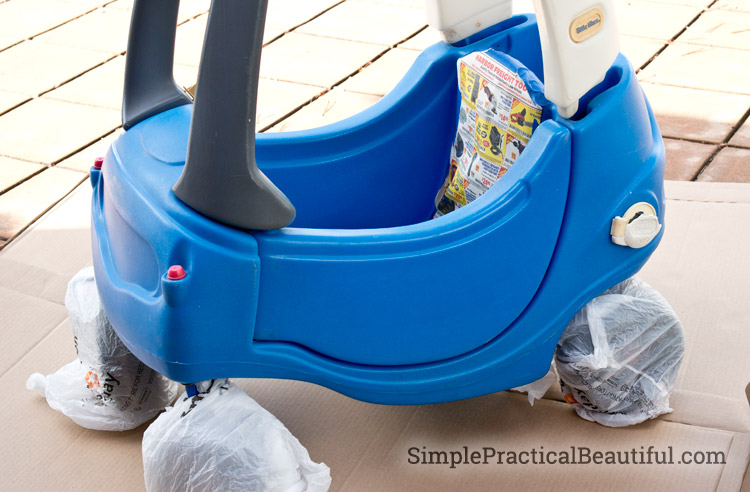 I found Rustoleum Universal hammered antique pewter spray paint and Universal satin black spray paint that are made to bond with plastic, so I didn’t have to worry about priming or sanding. Both worked wonderfully, although they showed every scratch and flaw on the plastic. That was perfect for a Batmobile.

I painted the roof and several details silver. I didn’t worry about over-spray or bother to cover up parts that would later be painted black. The front and side bat symbol needed silver, and the dashboard and gas cap. 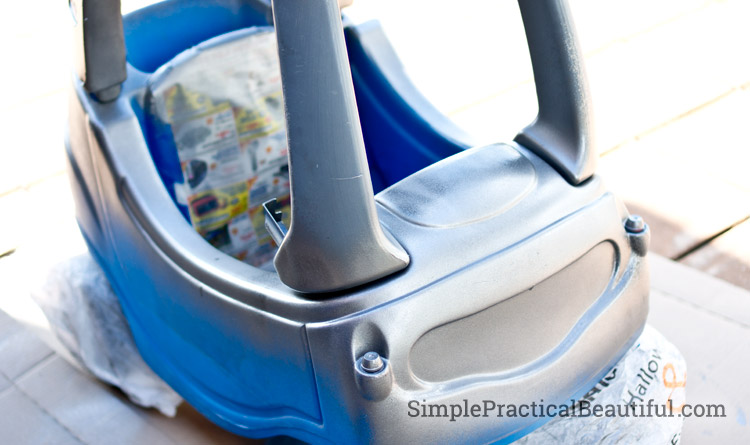 I let the silver dry for several hours, then started taping everything that needed to stay silver. Taping off the oval on the front of the car took the longest, but I just used very small pieces of tape to get a good curve. 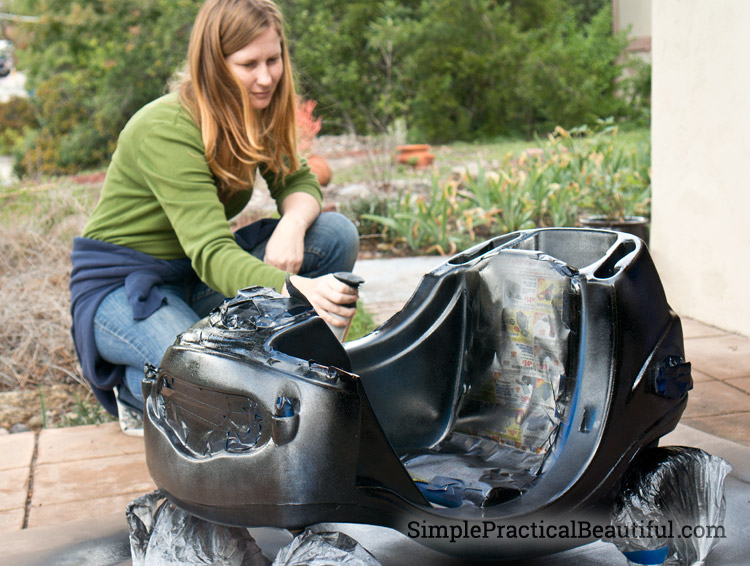 Once everything silver was taped and covered, I painted the body of the car black. I also taped over the colored “lights” on the police lights, and painted it black. I like how the police lights give it a retro 60s Batmobile look. 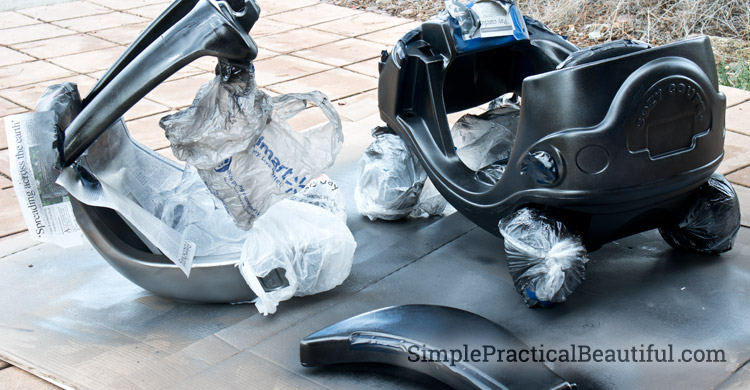 The Bat symbol on the front and side, took a little more work than spray painting. My husband printed out the bat symbol as a template. He taped strips of masking tape onto a sheet of wax paper (painters tape might have worked better, but the masking tape was fine). 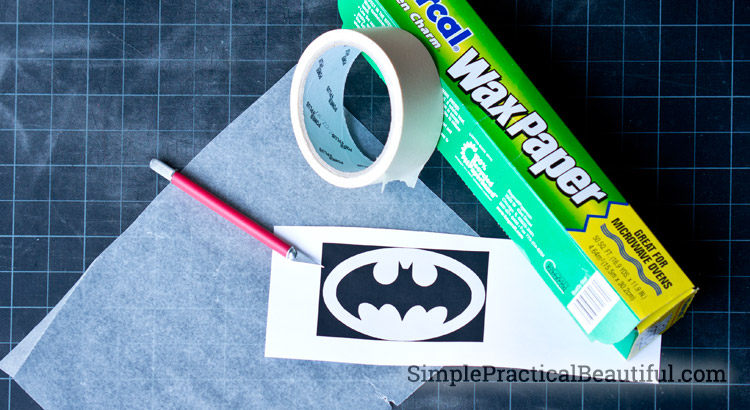 He stapled the print out of the bat symbol to the covered wax paper and cut out the symbol with a razor to get all of the small details. Then, he peeled the tape off the wax paper, now cut into a perfect bat shape. 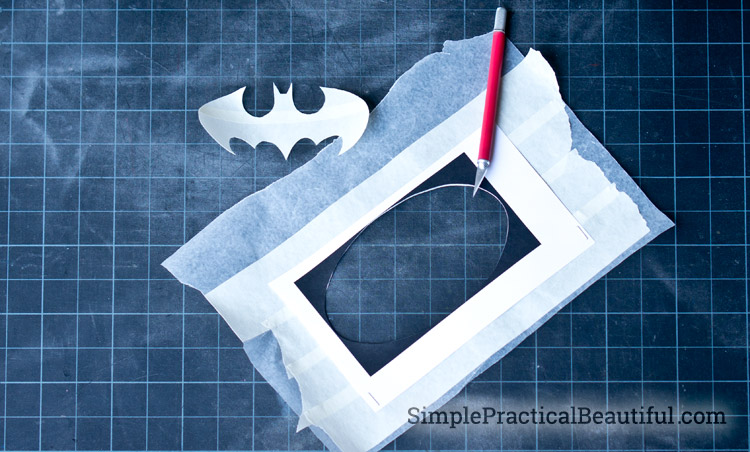 He stuck the bat-shaped tape/stencil onto the front of the car and painted it with yellow craft paint. It took several coats to get a solid yellow. 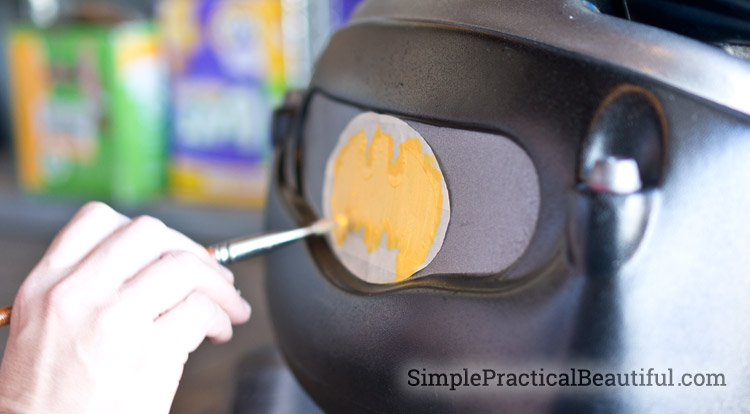 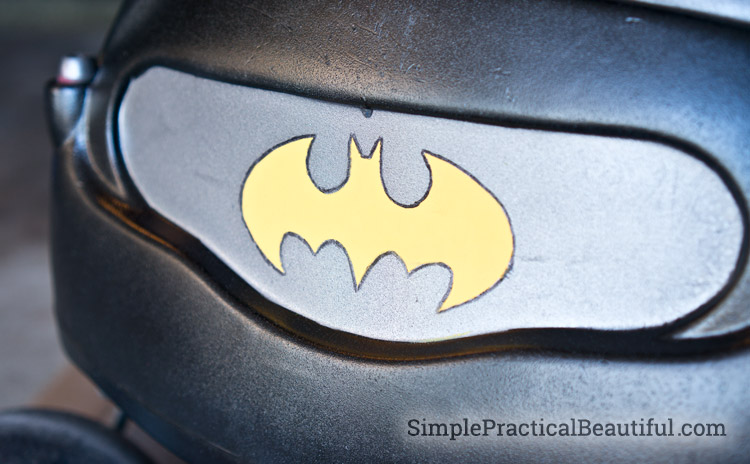 Any decent Batmobile needs a good exhaust system, so we made tailpipes out of PVC pipes. We cut PVC (sprinkler) pipes at a 45 degree angle and painted them silver. 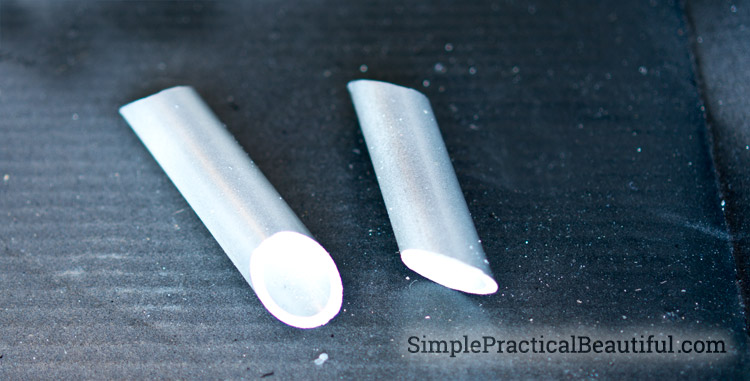 Then we attached them to the car with contact cement I had purchased to glue leather foot pads to my furniture legs. It glued the PVC to the plastic very well. Finally, we painted the inside of the pipes red because, well, the batmobile’s engine is awesome. 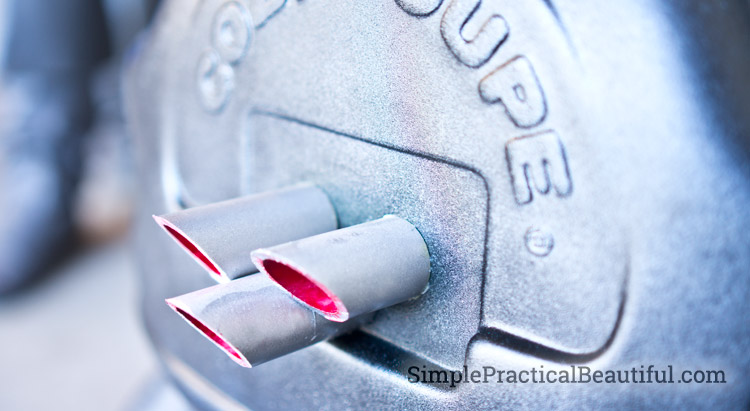 We reassembled the car, and added a few touch-ups. What do you think of the black and metal toddler Batmobile? I think my little Bat-toddler is going to love it. 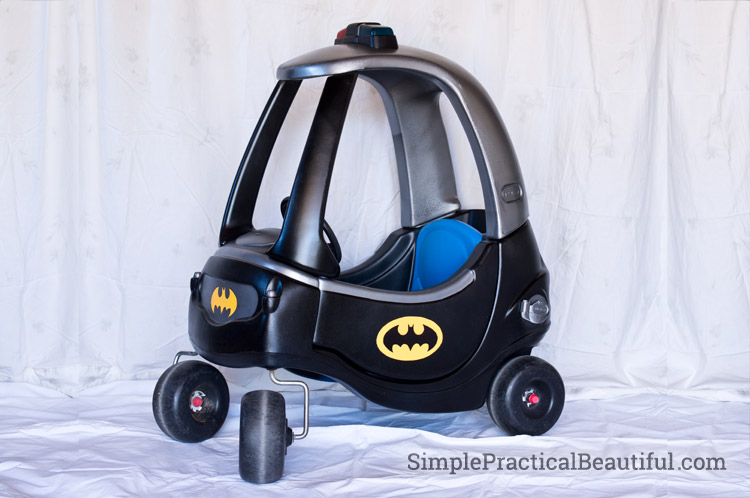 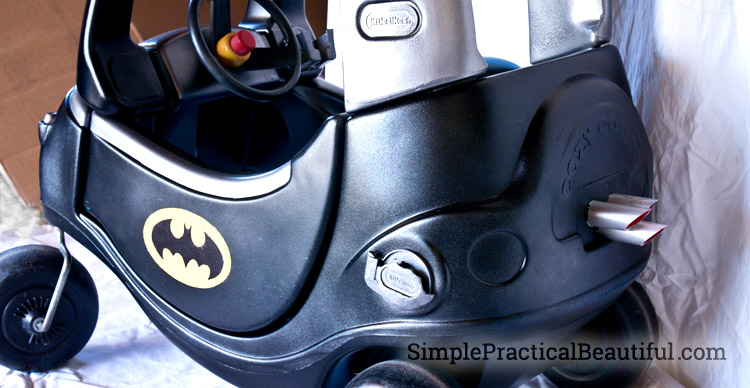 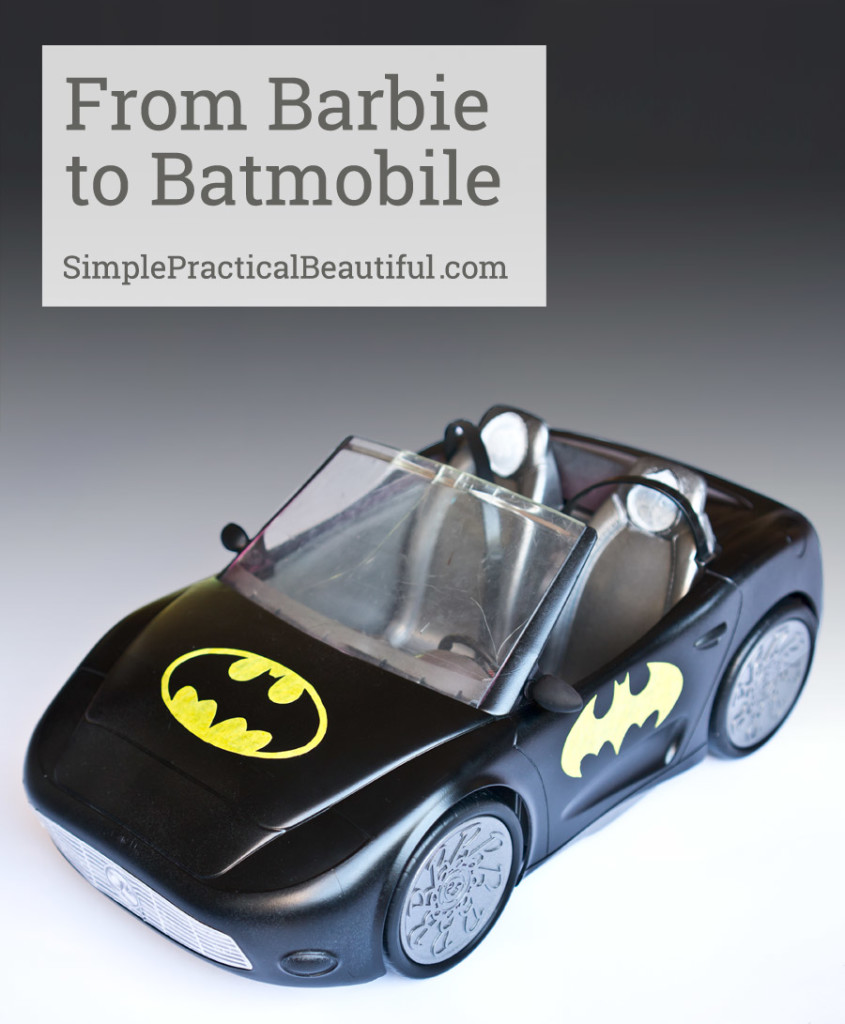 At the same time, we helped my 2 daughters turn their Barbie car into a Batmobile for their brother.

They took all of the screws out of the car and took it apart. They removed the stickers and saved them on wax paper. They taped off the windshield and removed the wheels. 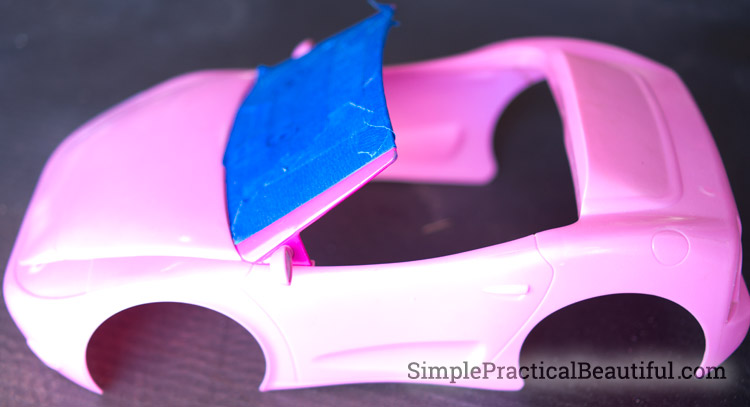 They spray painted the inside of the car hammered metal, and the outside matte black, with the same Rustoleum paints we used on the bigger car.

The dashboard and front panel looked pretty blank. The Batmobile is supposed to have tons of cool gadgets and features, so they hand-painted on some details with craft paint. 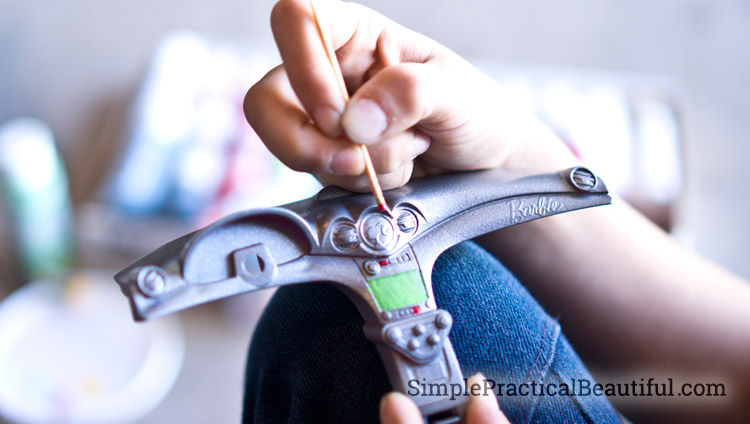 Most of the stickers were missing from the Barbie car, so they made new taillights and a Bat symbol with masking tape and packaging tape. First, they put masking tape onto wax paper as a backing. Then they colored the tape red and yellow with permanent marker. To make it glossy, they added packaging tape. 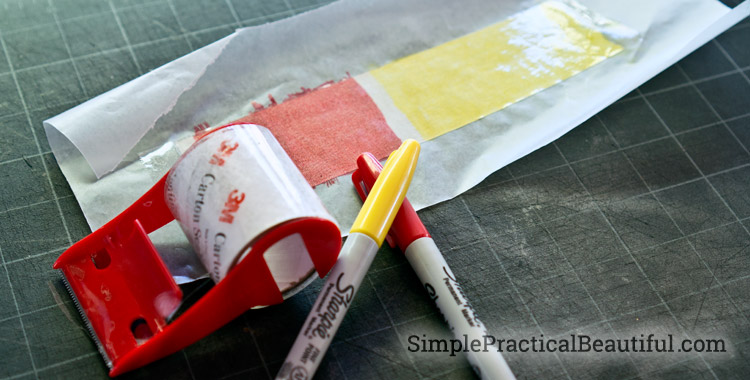 They cut the shapes out of their DIY stickers and added them to the car. 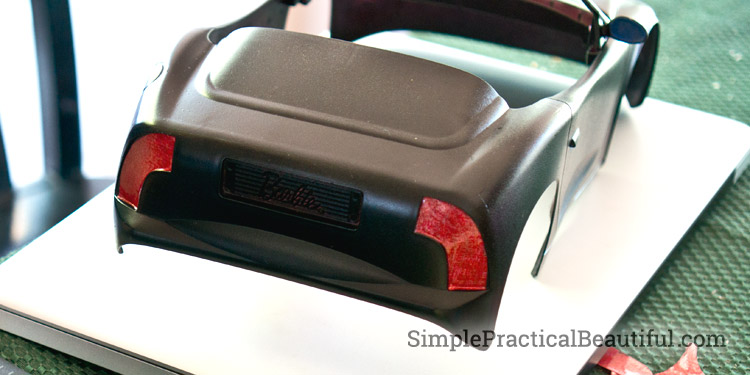 Once the Barbie Batmobile was reassembled, it looked pretty cool. 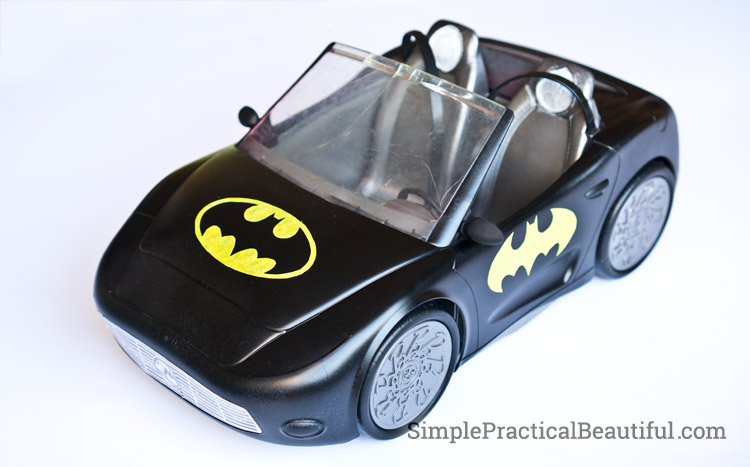 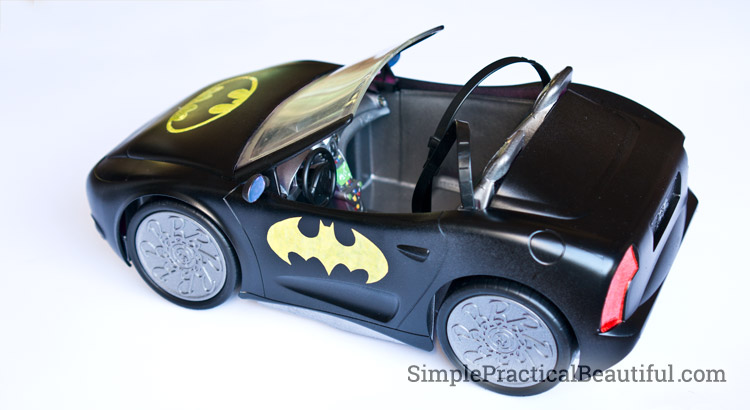 In case your wondering, the “B” on the wheels is for Batman.

It’s going to be a good birthday for my toddler with everything Batman. He can ride in his toddler Batmobile and drive his Batman doll around in a Barbie Batmobile. 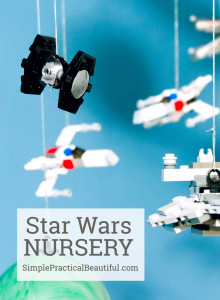 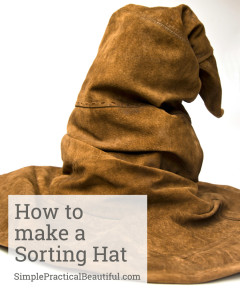