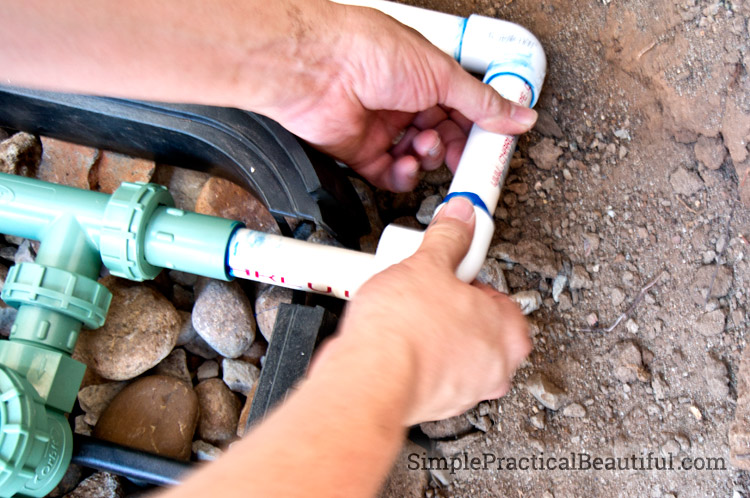 How to Install Irrigation Valves: Part 1 of the Sprinkler System

Installing a sprinkler system for a lawn and other landscaping requires connecting to a water supply, adding a backflow prevention device, and installing valves to control turning on the sprinklers. Here’s how we did it. 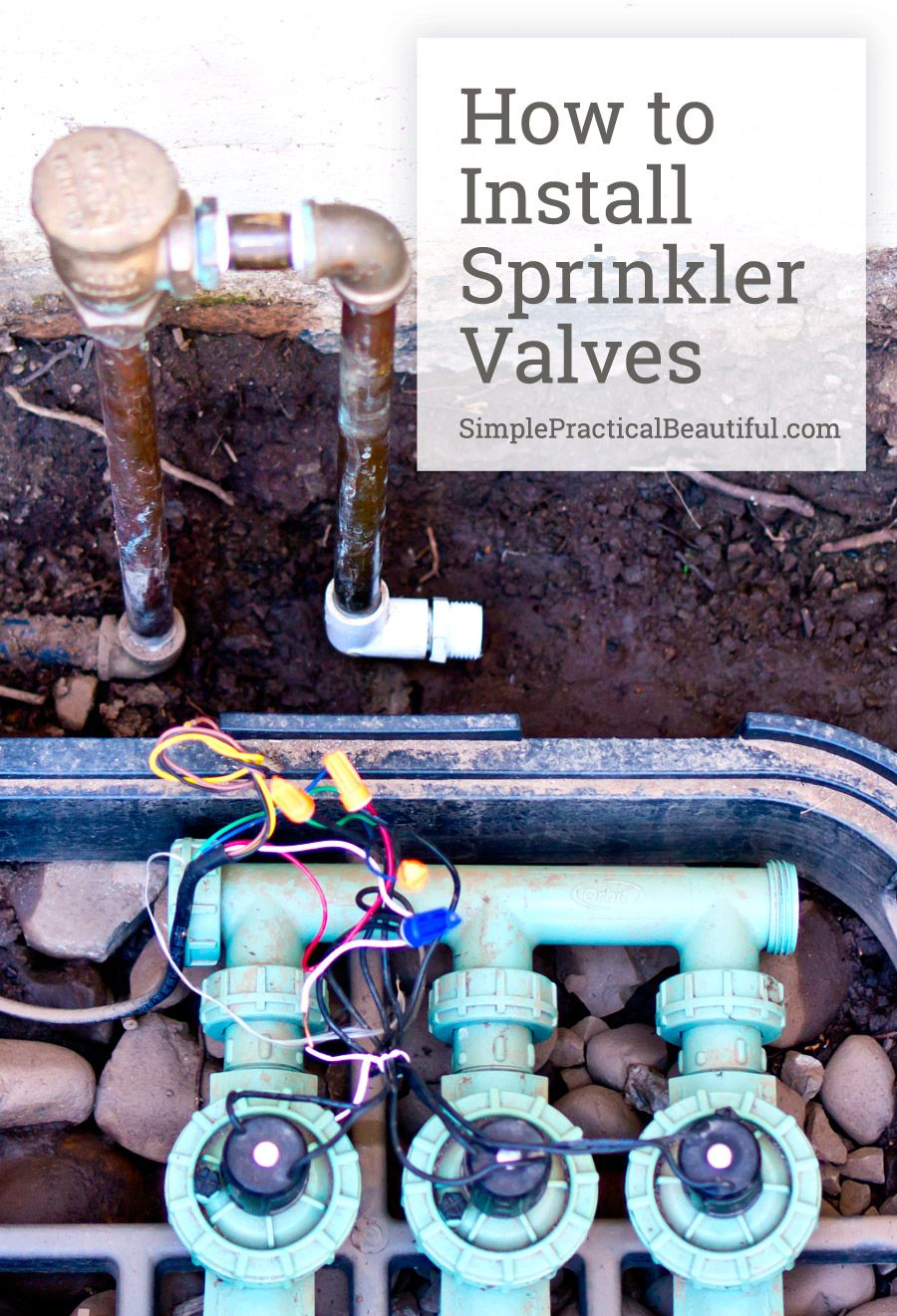 In our last home, we put in a sprinkler system, but we had some help. A local (Albuquerque) company took our landscape plan and created an irrigation plan, including sprinklers and a drip system. We then bought everything we needed from them all at once, including instructions on how to install it all. We had everything we needed to connect to our homes water supply, to put in a valve box and timer, to lay the sprinklers, and to set up the drip system. It was a lot of work, but with their step-by-step instructions, we knew what we were doing. Plus, our home was built in 2004, so it had everything ready for a modern sprinkler system. 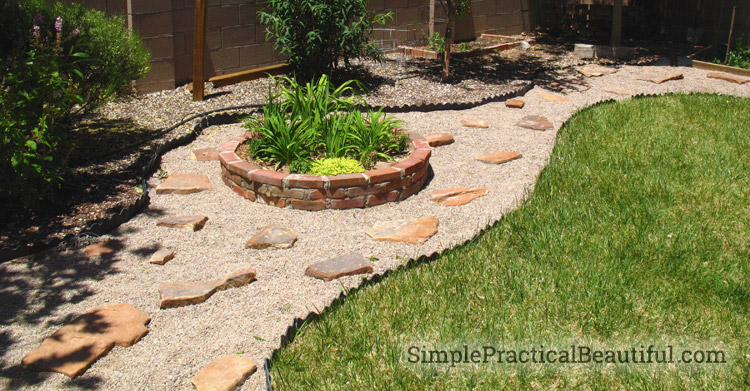 This time around, it was not so easy. We got a plan from Rainbird, but it only included how to lay the sprinklers and their pipes. Nothing about the valve box or the connecting to the water. And our current home was built in 1954 with 1/2-inch copper pipes, so it involved more than cutting and glueing PVC.

We did research, took our time, and asked for advice, and we were able to put in an even better irrigation system than last time. Here’s the plan we drew up before installing any pipes. 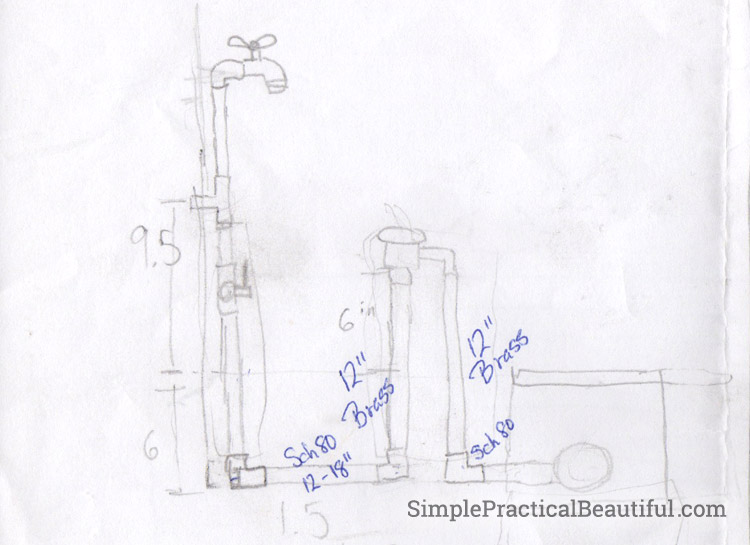 Connect to the Water Supply

Our backyard already had a hose bib (faucet for a hose), so that was our water supply. We replaced an elbow joint with a T connection, so that the water could flow up to the faucet or down to the irrigation valves. The pipes are copper, so this involved a lot of cutting and soldering, and even getting into the crawl space below the house. We asked a more experienced friend to come help us. I’m not going to go into all of the details, I’ll just say connect to your water supply if you are confidently able to or call a plumber or landscape professional to do it for you. This is not a part you want to mess up. 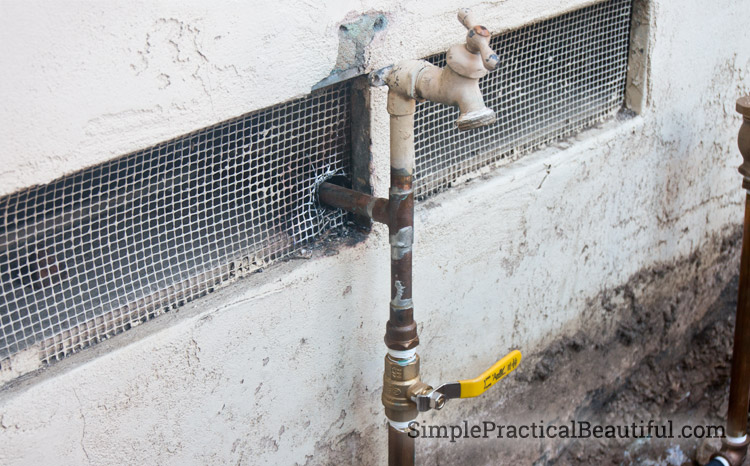 Add a Shut off Valve 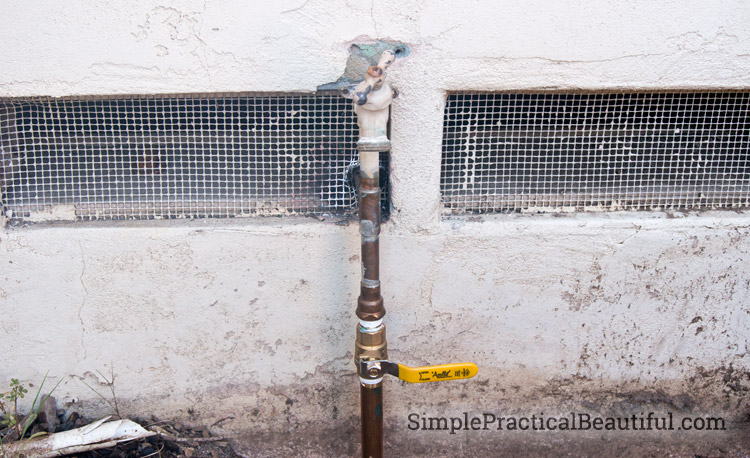 You can see that the valve has a small, yellow handle that turns vertical to let water through or turns horizontal to stop the water. Once the sprinkler system is finished, this valve will stay open all the time. The valve is threaded on both ends, so it just screws on to the pipes with thread sealing tape.

At this point we also added an adapter to change from 1/2-inch pipes to 3/4-inch. Apparently, 3/4-inches is standard (and so is 1-inch) in the irrigation world, but 1/2-inch pipe is not. It was just easier to find everything we needed in 3/4-inch.

You don’t want dirty or contaminated water flowing back into your water supply, and neither does your city, so every irrigation system needs a backflow device to prevent that. Some sprinkler valves come with a back flow device in the valve, but because we chose to do in-line valves (more on that later) we needed a separate backflow prevention. 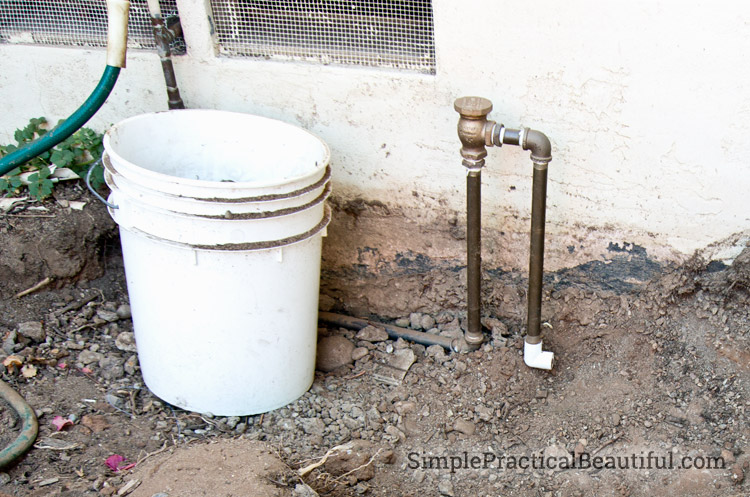 The backflow prevention device needs to be higher than the sprinkler valves because water does not flow up. The device also has a valve that closes if there is any suction pulling the water back toward the water supply. 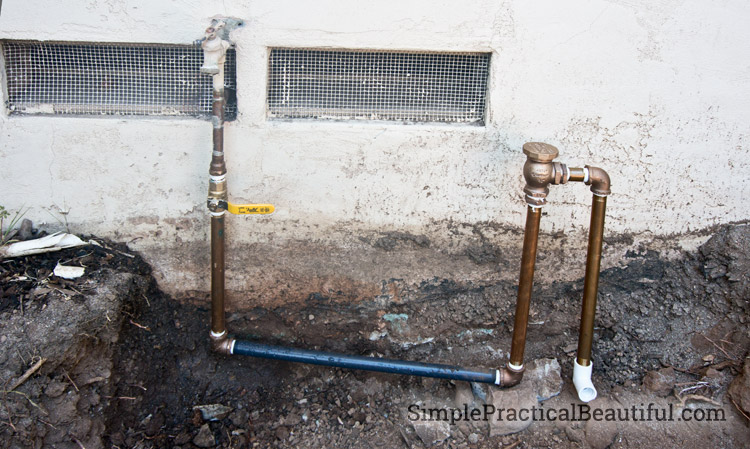 We installed a 12-inch brass pipe going up to the backflow device and another 12-inch brass pipe coming down out of it. All of this can be done with plastic, or PVC, which is much cheaper. But we wanted a sprinkler system that would last for years, and PVC breaks down in the sun over time. Plastic can also be broken by someone accidentally hitting, kicking, or tripping on it, and we have kids. You’ll notice in the photos that all the plumbing parts above ground are metal so that they will last (in one photo, you can even see the remains of a previous pvc sprinkler system—we broke that pipe out with our bare hands).

There are two types of sprinkler valves, in-line and and anti-siphon. The anti-siphon valves are the ones with a backflow prevention device inside. They have to be above ground for the backflow device to work. We didn’t want anything non-metal above ground, so we went with the in-line so they could be in a box and underground, safely out of harms way. Just FYI, if you live where it freezes, your valves have to be underground. 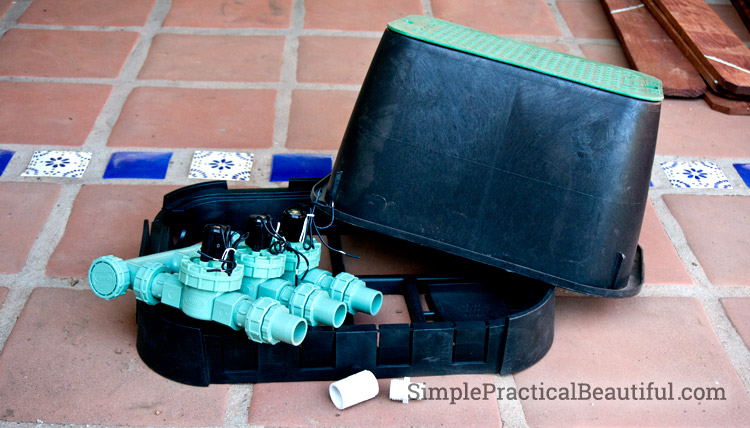 We planned to put in three valves, one for a sprinkler system and two for drip systems. We found this great kit on amazon.com (that’s an affiliate link) that had all three valves already put together. We also bought a valve box and cover from the same manufacturer, so we knew that valves would fit inside. In the photo there’s also the adapters to connect to the sprinkler pipe. 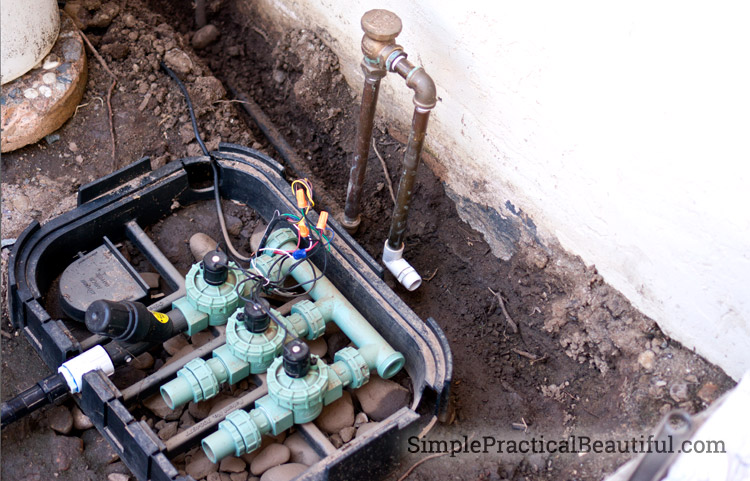 So, we dug a hole big enough for the valve box and put down some gravel (you don’t want mud around your valves). Then laid the valves in the box and started connecting it to the brass pipes with PVC pipes.

PVC is very easy to work with, you just cut it to the right length, and on the inside of the female piece and outside of the male piece, then push them together. 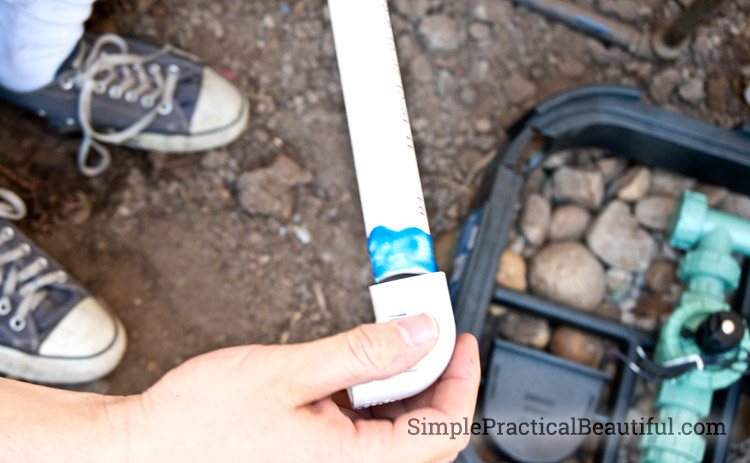 We had to make a U-shape with our pipes to get the box to fit where we wanted it.

Once the glue was dry, we tested the whole thing by turning on the water valve (that yellow handle). The sprinkler valves are closed until you tell them to open (with an irrigation timer), so everything should stay nice and dry. Lucky for us, it did. 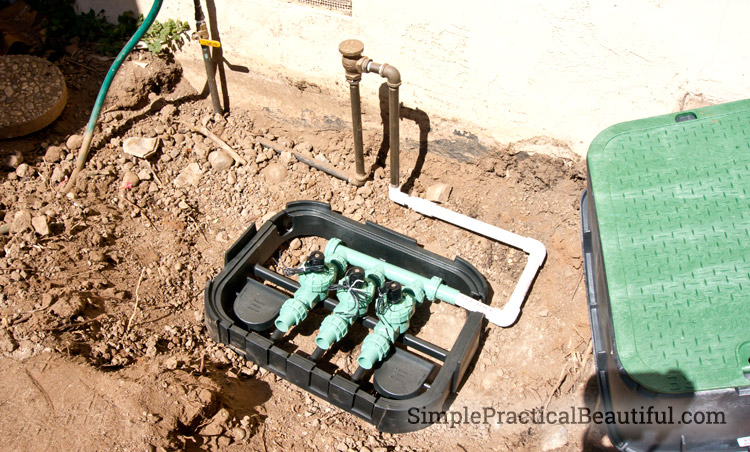 And that’s how we put in irrigation valves. Click here for part 2, to see how we installed the actual sprinkler system, and next week I’ll post about the drip system.

One final thought: connecting to the water main (in this house) was difficult, but each step after got easier and easier. Installing irrigation valves is definitely something any homeowner can do.