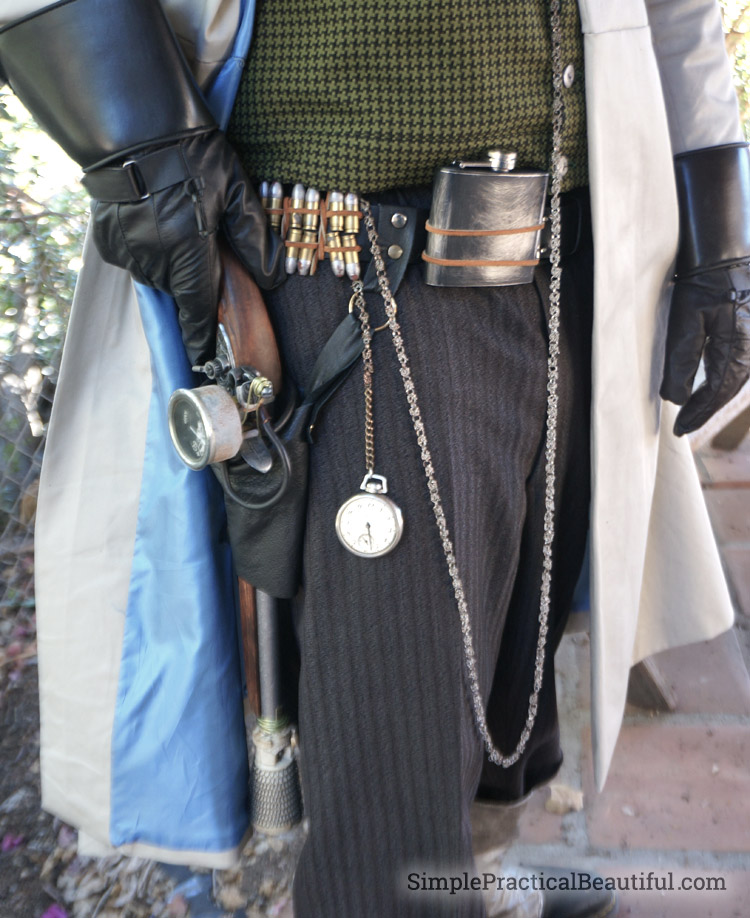 Here’s a breakdown of his amazing costume: 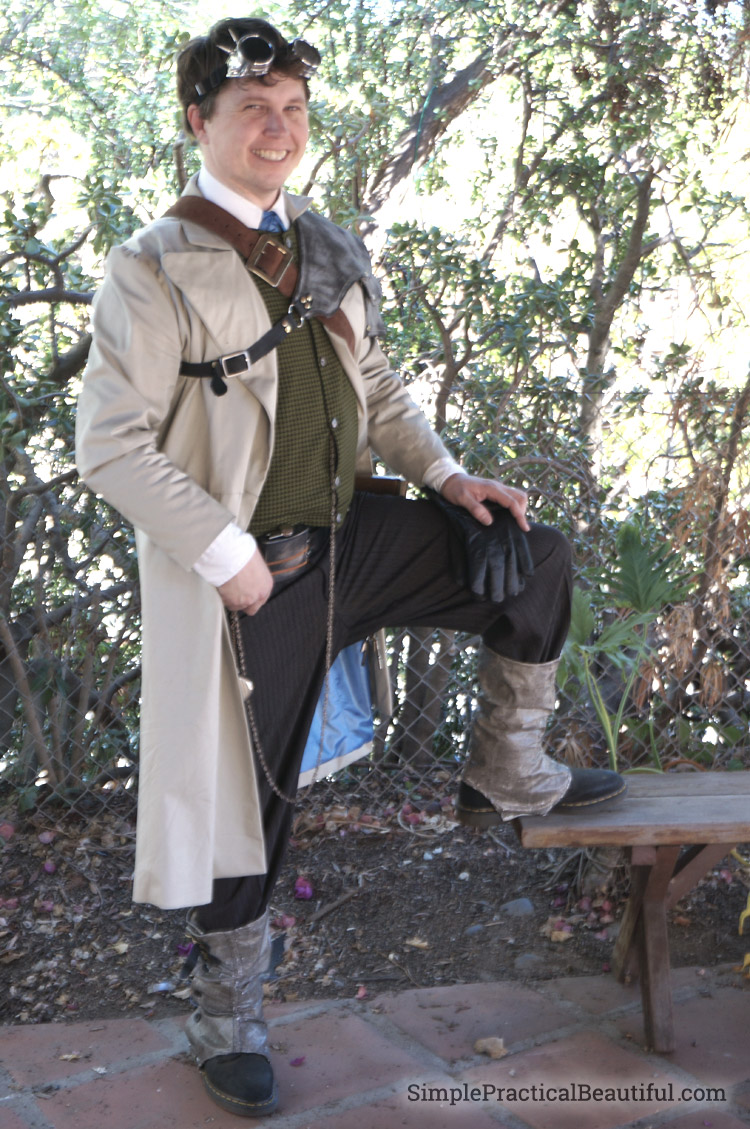 I made the trench coat from the Simplicity 4083 pattern. Yes, we could have bought a thrift store trench coat, but this looked better than anything we found, and it was cheaper. Plus, I could add the cool blue lining on the inside. It’s a fairly simple pattern. The lining is not part of the pattern though, so I had to make that up, which added a little complexity, but I’ve used this pattern so many times it wasn’t too hard. I’ve used Simplicity 4083 to make a coat for the mad hatter, jack frost, Joseph Smith, and even the cape for Prince Phillip. 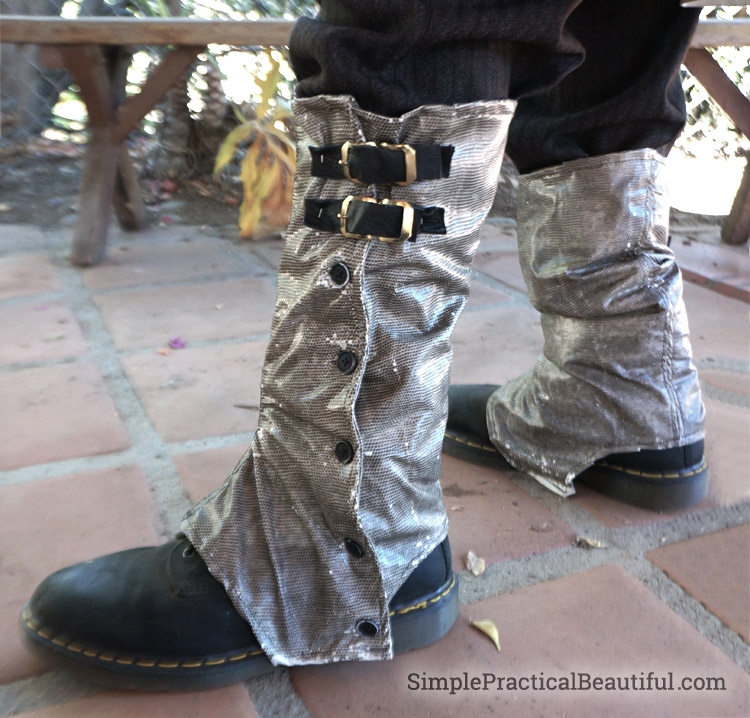 We watched a couple of YouTube videos on how to make spats before making these. Basically, you wrap a piece of paper around your ankle and trace where your foot curve, in front and on the heel. We used some faux snakeskin fabric we found, which didn’t really hold up well, but that just added to the worn-in look, I hope. Then we added straps, buckles, and buttons to finish them. They also have a dark elastic strap that goes underneath his foot, to hold the spats down on the shoes. 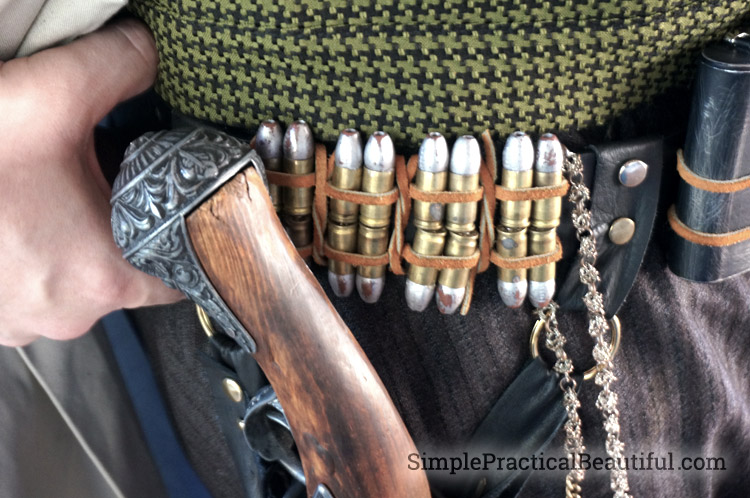 We found a cheap, vinyl belt with double holes all the way around it. The holes were awesome because we didn’t have to punch any holes in the belt to add the accessories. We used leather straps to attach wooden stakes, a flask, a holster for the gun, a hatchet, a strange electrical switch we found in my in-law garage, and silver bullets (basically everything you would need to fight monsters). The silver bullets are oval beads, painted silver, and glued into empty ammo shells. 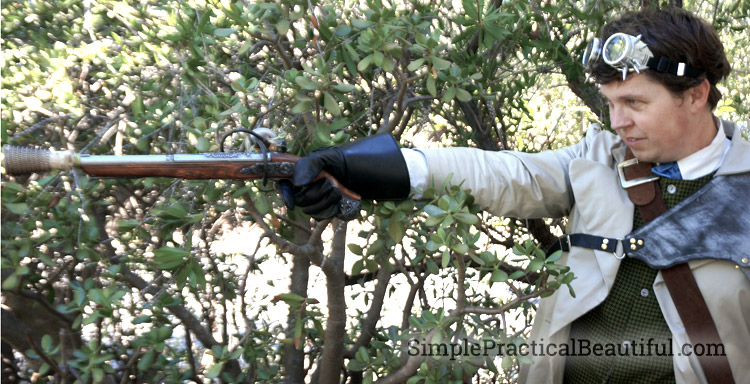 We started with a realistic looking toy pirate pistol (that we’ve used for many costumes) and added whatever we could find to make it look more steampunk, including a large gauge and case, an old ceramic heater that plugs into an outlet (on the barrel), and lots of wires and cables. Everything was attached with wires because we want to be able to reuse the original gun in the future.

The pauldron, or shoulder armor 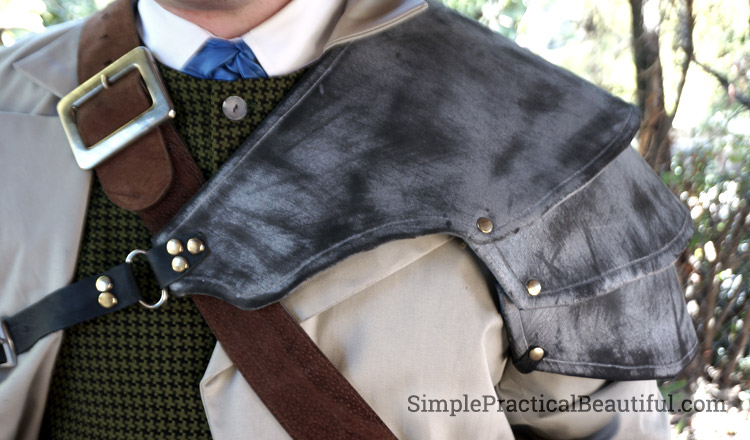 We’re working on a video to share how we made the pauldron, so check this post again in the next week or so for an update. In the meantime, I’ll just tell you that we made it from two layers of black craft foam, spray painted silver, and rubbed with a shoe polish brush to give it an old metal look.  The pauldron is three pieces of armor connected together with aluminum chicago screws. You can download the pattern here.

The gloves and the goggles

Both these items were purchased. The black gloves are gauntlets(because they cover the wrist), and will be used for many future costumes. In fact, the day he got them, my husband wore them around and pretended he was Darth Vader. Yes, I have an awesome husband.

We looked into making goggles, because there are a lot of tutorials out there on how to make them, but ended up buying these because they cost less than the materials to make our own. Plus, aren’t the spikes cool?! 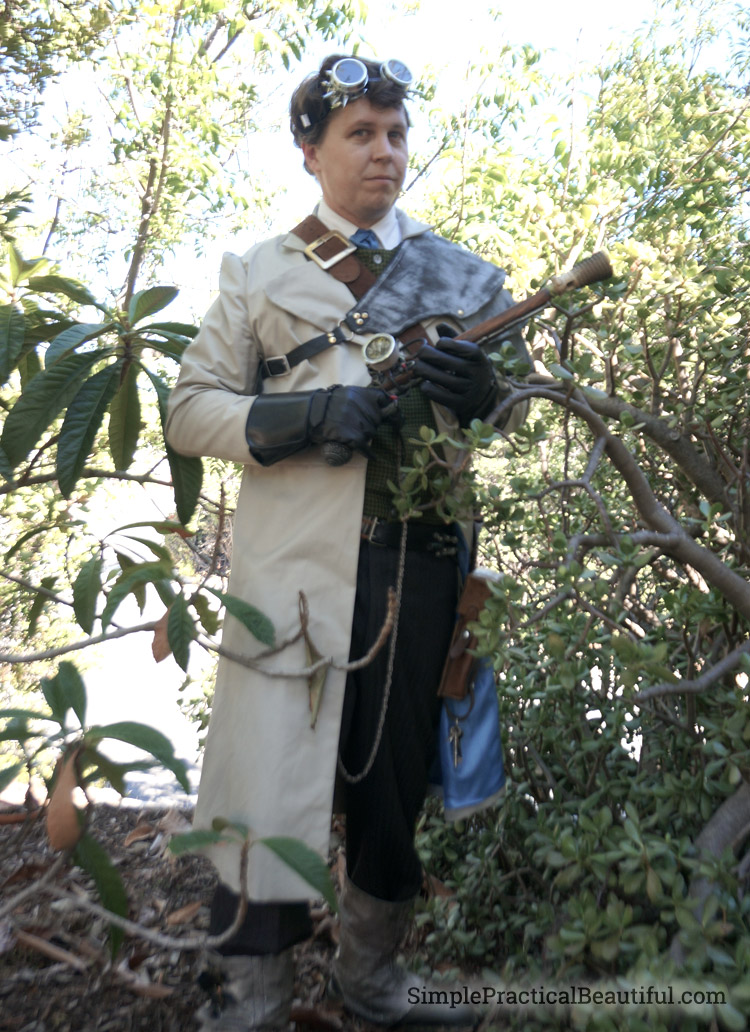 That finished up my posts on our monsters and steampunk monster-hunter costumes. If you missed them, take a look at my kids’ monster costumes, and my ladies steampunk costume. Or read about How to Steampunk a Character. Happy cosplaying!