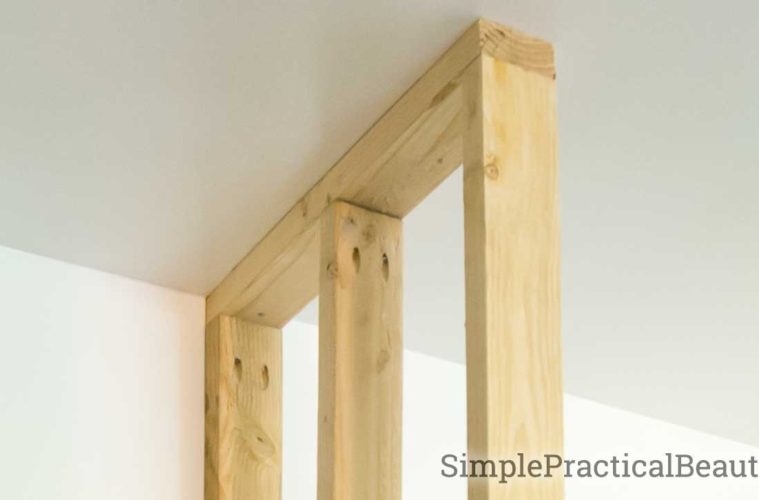 Framing a Wall in Place

Framing a wall is an easy do-it-yourself home improvement project. Build a small interior wall by framing it in place, then add drywall, mudding, texture, and paint. 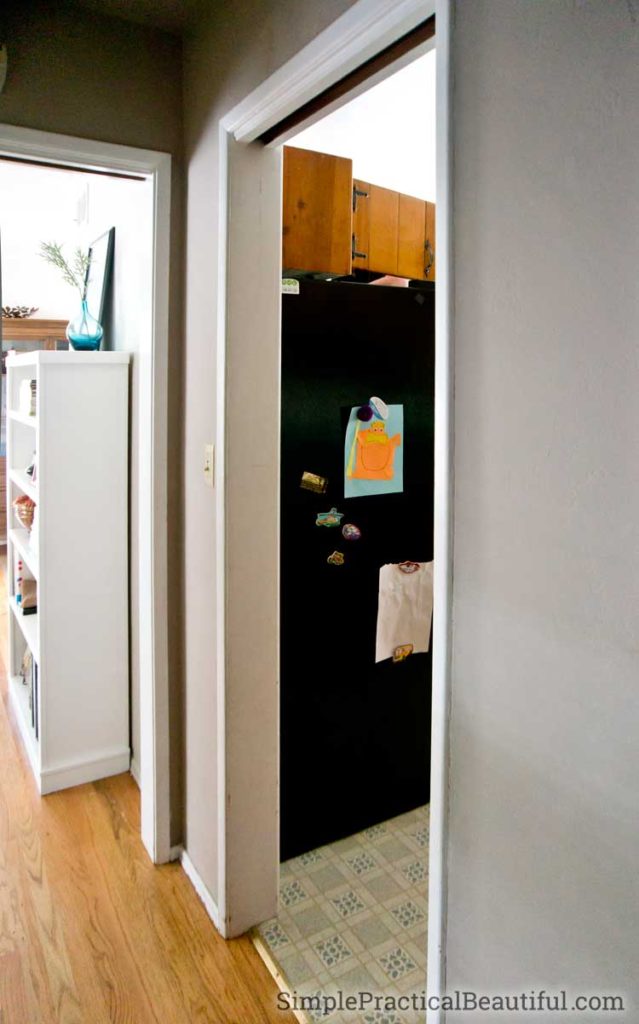 This was the view down the hall from my bedroom. Seeing my newly refinished bookshelf each morning made me happy. Seeing the ugly side and back of the refrigerator—not so much. Actually the worst part of having a fridge down the hall from our bedrooms was the noise. We bought the quietest fridge we could find, a Kitchenaid, but since it wasn’t enclosed, we could still hear the compressor all night long.

So we decided to build a small wall next to the fridge to reduce the noise and make the kitchen look more finished. By the time the whole kitchen renovation is done, with all new cabinets, this new wall will make the refrigerator look built-in. We planned the wall to be about 25 inches, so it comes just a little further out than the cabinets, but not so far that it blocks the fridge door.

Building the Frame in Place

Usually when your building a wall, you build the frame on the ground then move it into place. We decided to build the wall in place for two reasons. First, the wall is small, only 3 studs, so it was pretty simple to put together. Second, the floor and ceiling in that part of the kitchen are not completely square, so framing the wall in place would make it fit the space more perfectly.

If you are framing a wall in place, you have to make sure that everything is level and flat and lined up. When you frame on the ground, the frame will be level because the ground is flat. But framing in place, it’s very easy to end up with a crooked or warped wall if you don’t level and square each board.

All home improvement projects begin with good preparation. We removed an old over-the-fridge cabinet that was in the way and the vinyl flooring around where the new wall would be. We also removed the molding on the old wall so the new frame could be flat against it. 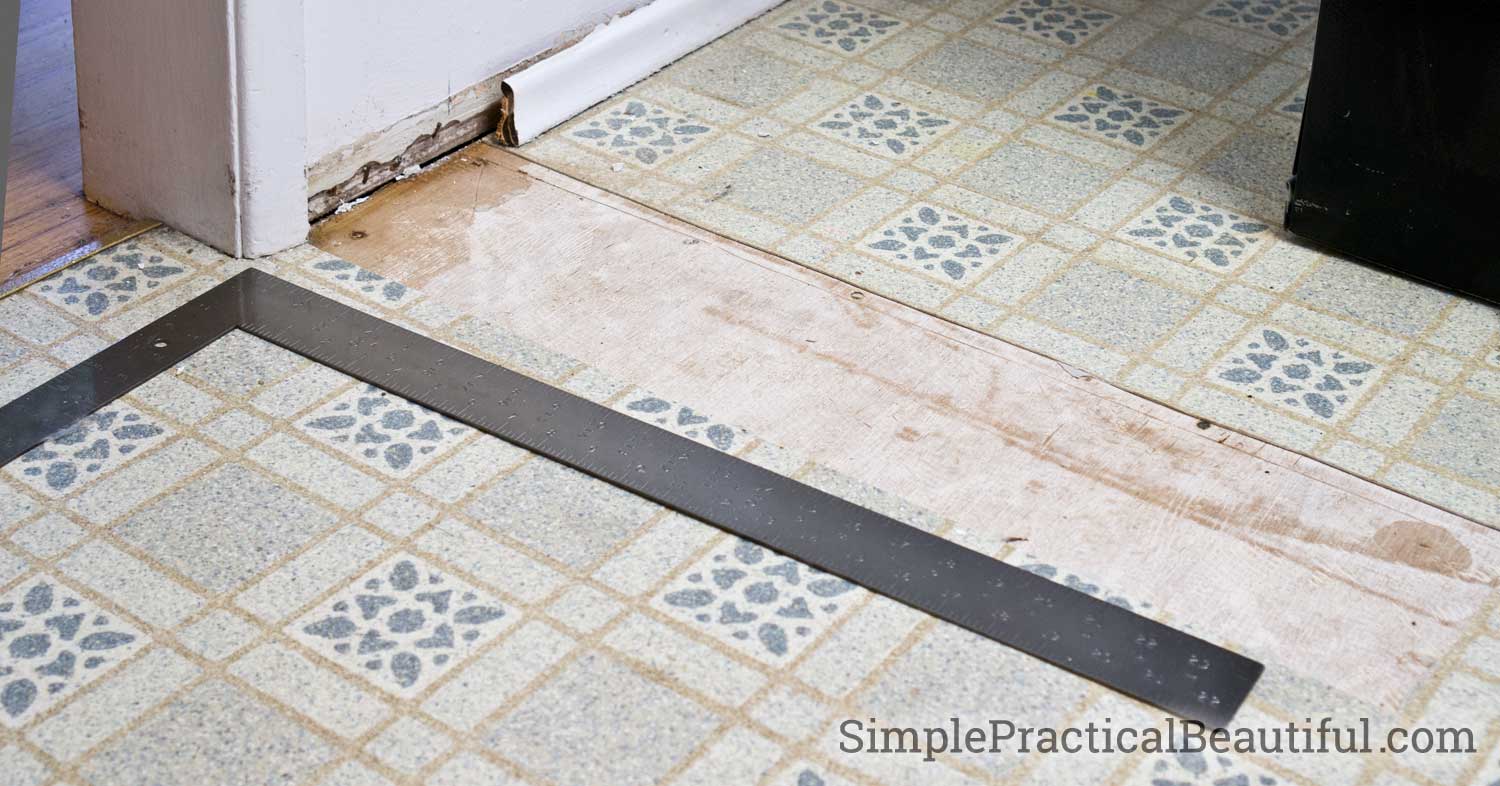 The frame for the new wall will be about an inch away from the existing door frame to give us enough room to add drywall and finish it. So we nailed a one inch board onto the wall next to the door frame to act as a spacer. It will come down after the wall is framed.

We also checked for studs and joists above, below, and in the existing wall. We were very lucky that there was a joist below the subfloor right where we wanted our new wall to go, another joist in the ceiling right above it, and a stud in the wall. Probably because we were building next to a doorway. Our new frame would easily be attached to the joists and stud and be very secure.

checking for a ceiling joist 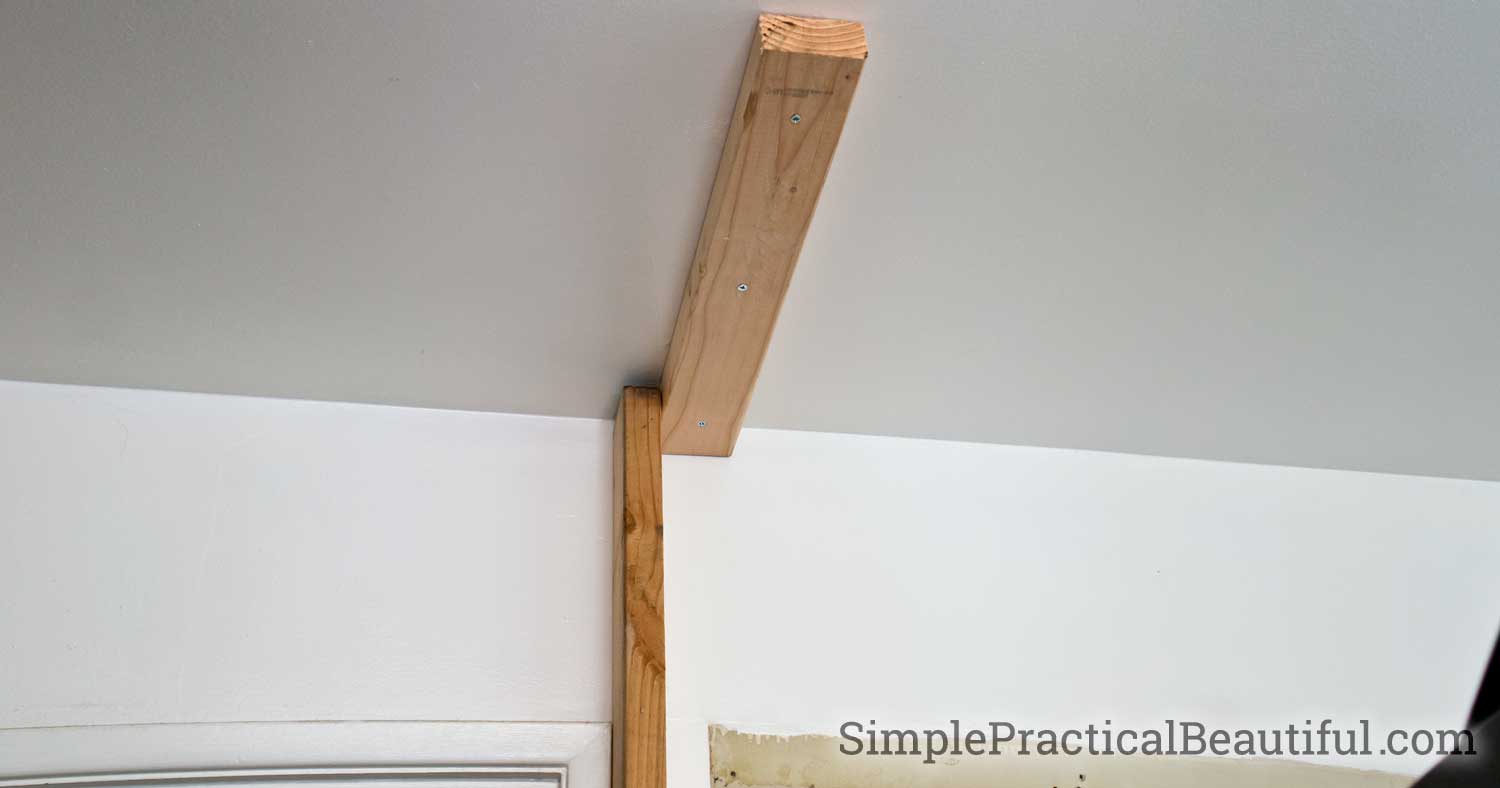 We screwed the top plate to the ceiling. You can use nails when framing, but it was easier and more secure for us to use screws. Now, maybe if we had a framing nail gun…

Add and Line Up the Bottom Plate

We cut another 25-inch board for the bottom plate, or bottom board of the frame, and lined it up with our spacer and used the measuring square, but we needed to make sure it was exactly below the top plate, otherwise the whole wall would end up skewed. 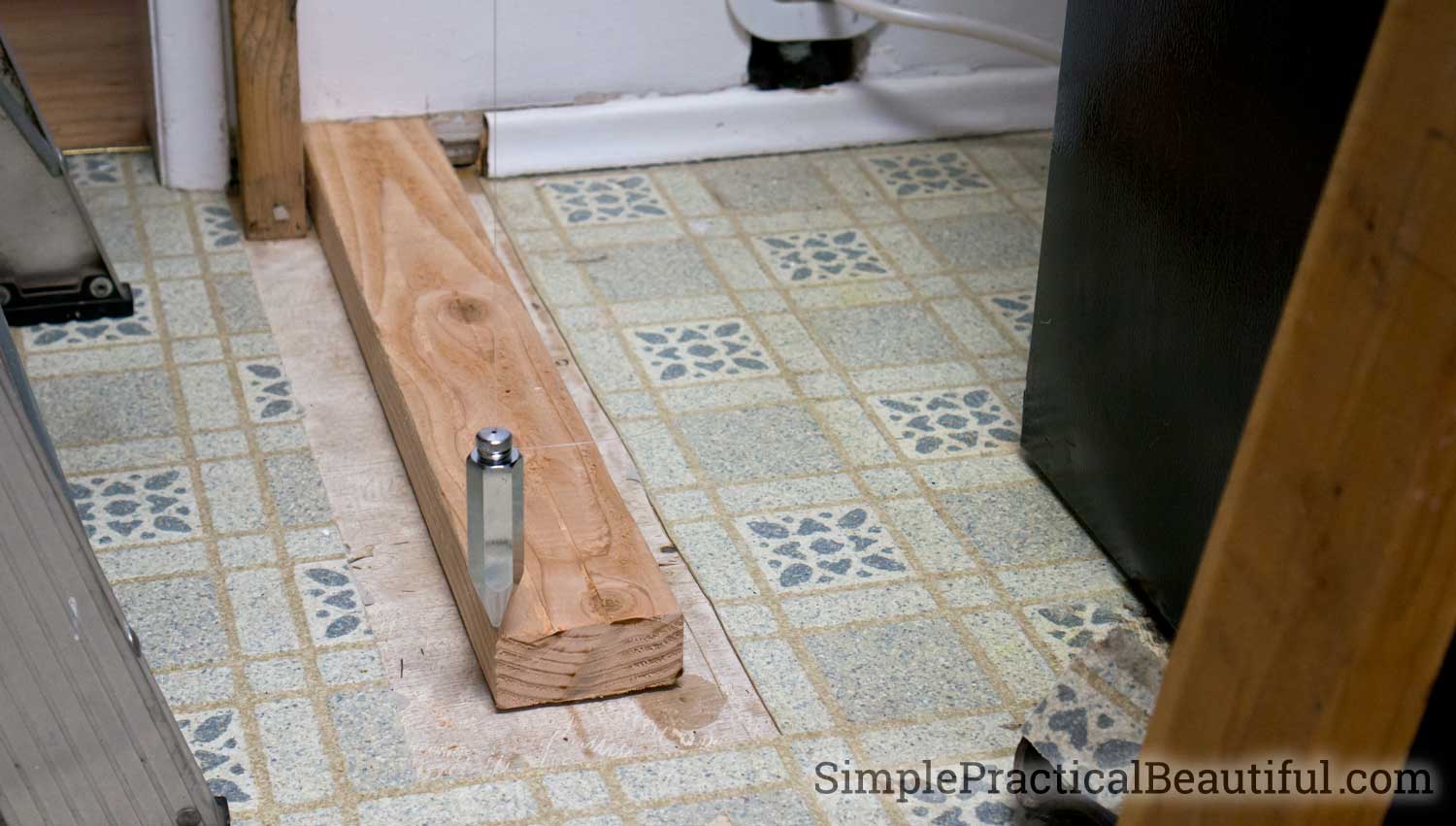 Once the bottom plate was lined up, we screwed it into the floor joist through the subfloor.

Studs can only be 16 inches apart, maximum. Since our wall is 25 inches, we needed three studs. The studs are 2X4 boards cut to fit between the top and bottom plates. For our wall, that meant 7 feet and 9 inches long. 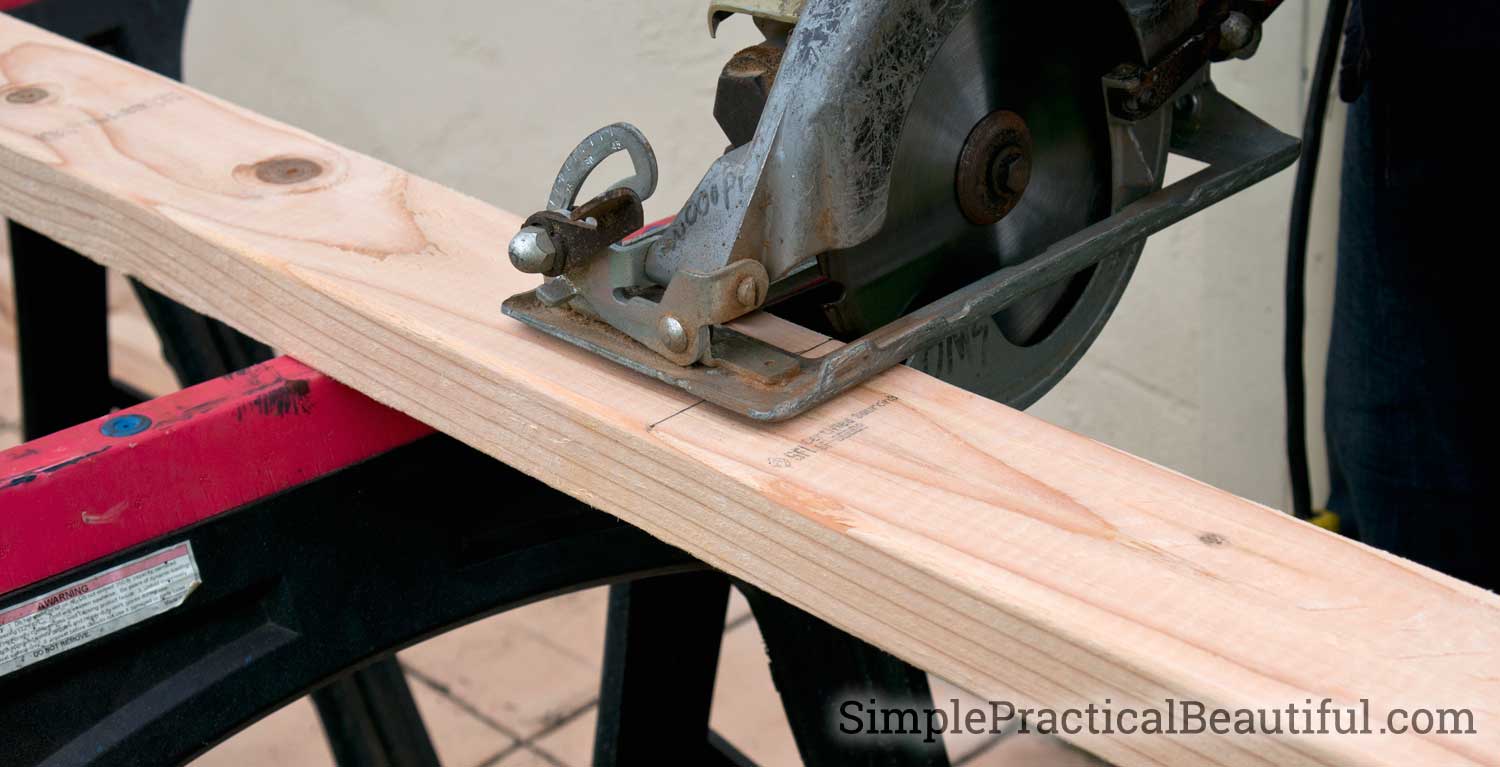 After cutting the boards, we added pocket holes to both ends with a Kreg jig. Normally pocket holes are something used on furniture or woodwork that will be seen, but it was an easy way for us to make sure the screws went into the top and bottom plates at the correct angle. 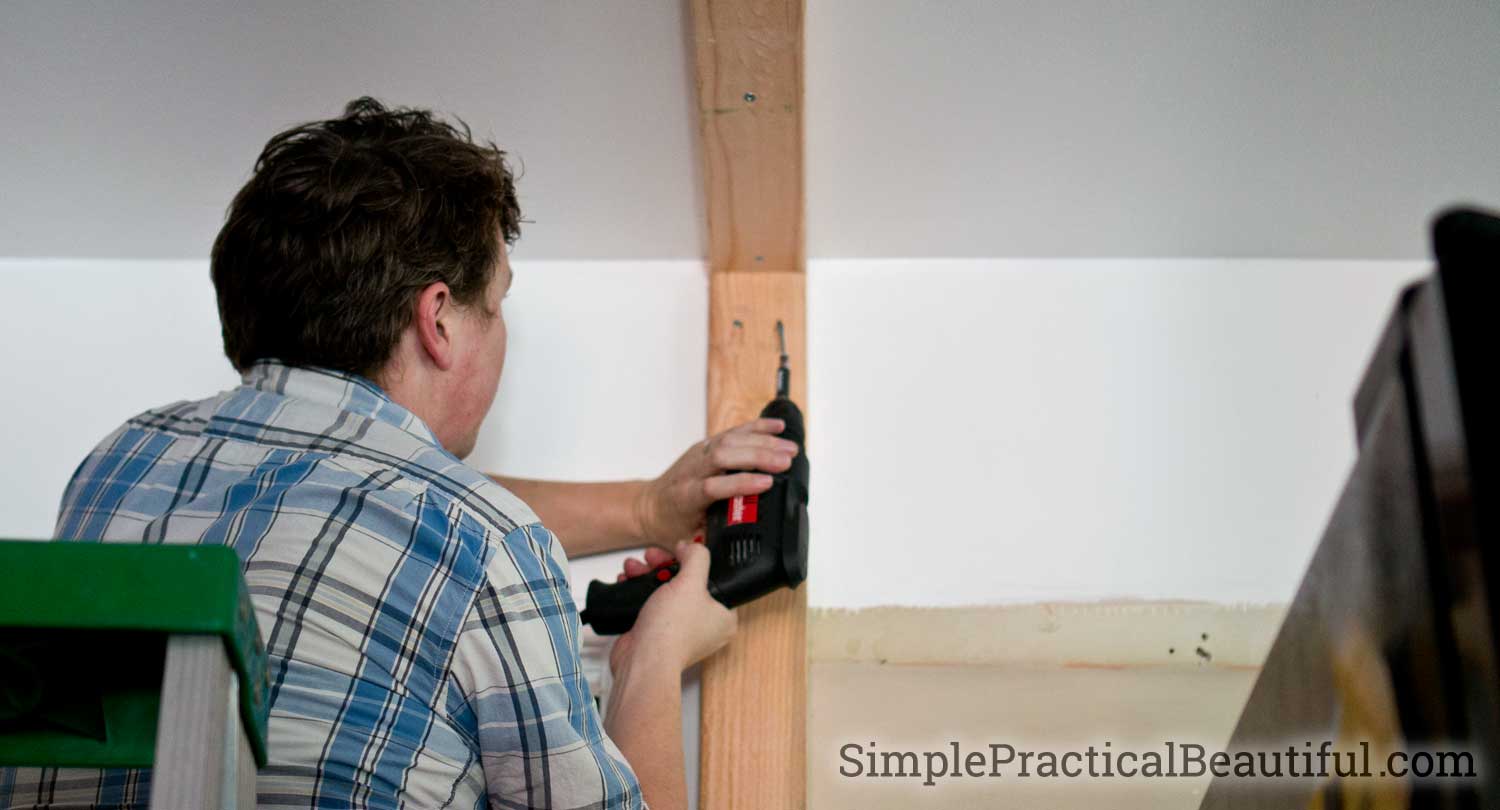 We inserted the studs and used both a measuring square and a level to make sure they were straight and level from all sides. Then we attached the studs with screws through the pocket holes.

And that’s how you frame a wall in place. 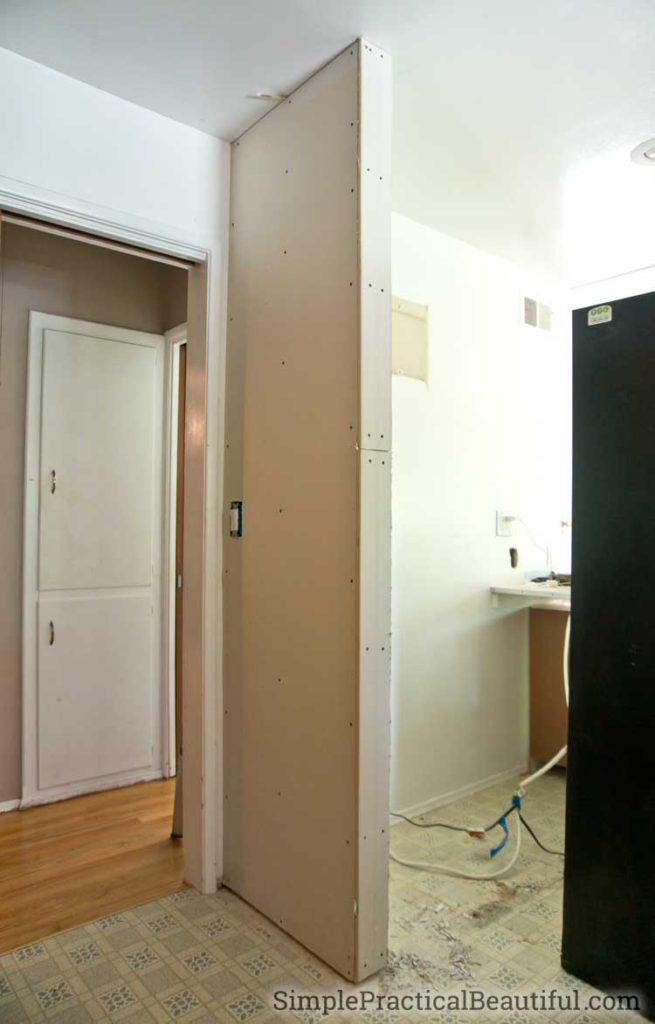 Of course, most walls need more that just framing. Our new wall went right over an existing light switch, so we moved the light switch onto the new wall (and replaced it with a new switch). 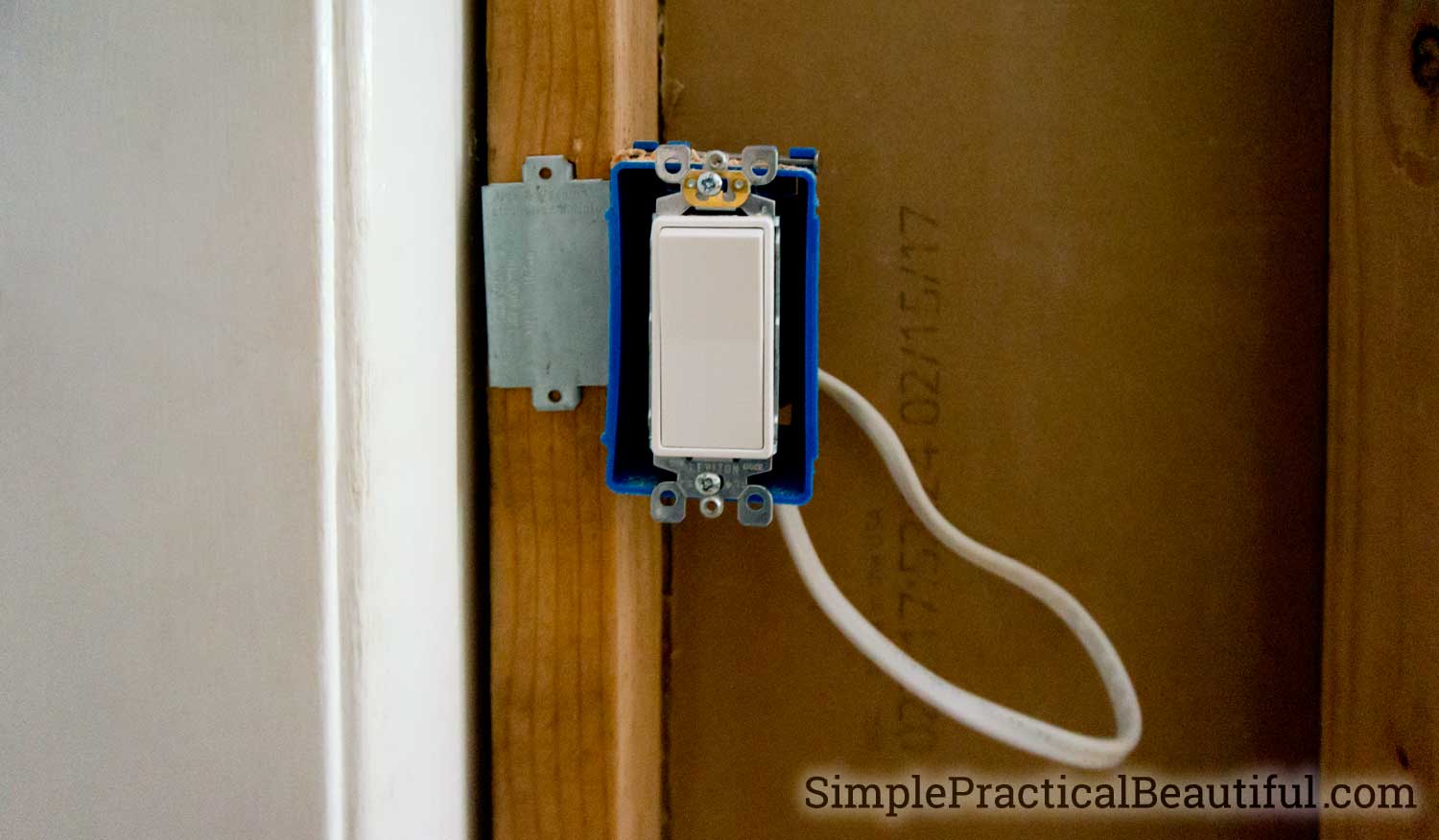 We drilled a 1-inch hole through the stud next to the old wall (before the stud was in the frame) for the light switch wiring to go through. We also added metal plates to both sides of the stud by the hole. That way in the future, no one will accidentally drill into the wiring. We attached a new electrical box for the switch right above the wiring hole. If you want to read about installing the light switch, it’s the same process as replacing a light switch. You can also watch how to add an electrical outlet, if you need to add one of those to your wall. 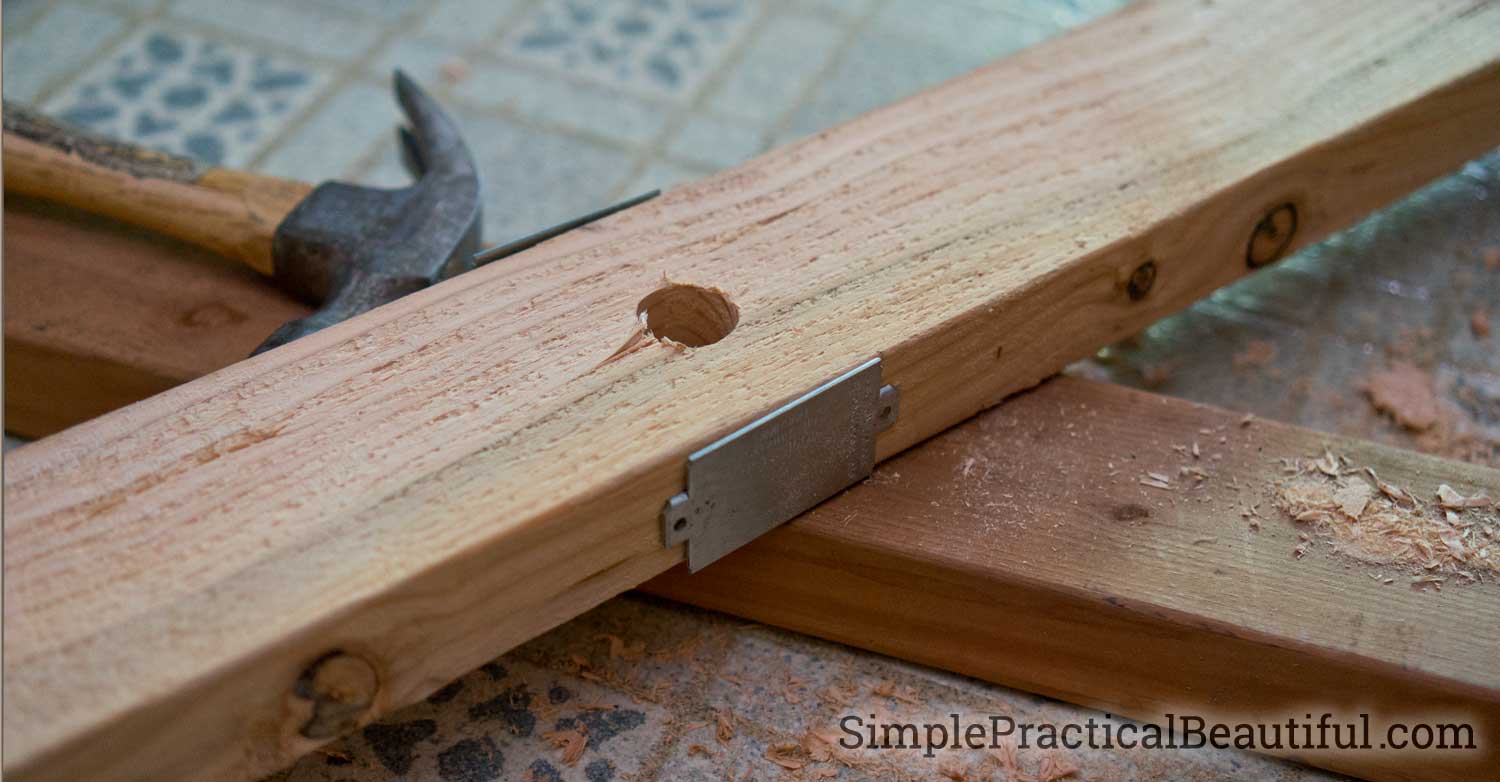 You can read all the details about putting up drywall, applying mudding, and adding texture in my post on replacing wood paneling with dry wall. For our new wall, we used one 4X8 piece of half-inch drywall on the sides, and some left over dry wall from replacing the wood paneling on the ends. 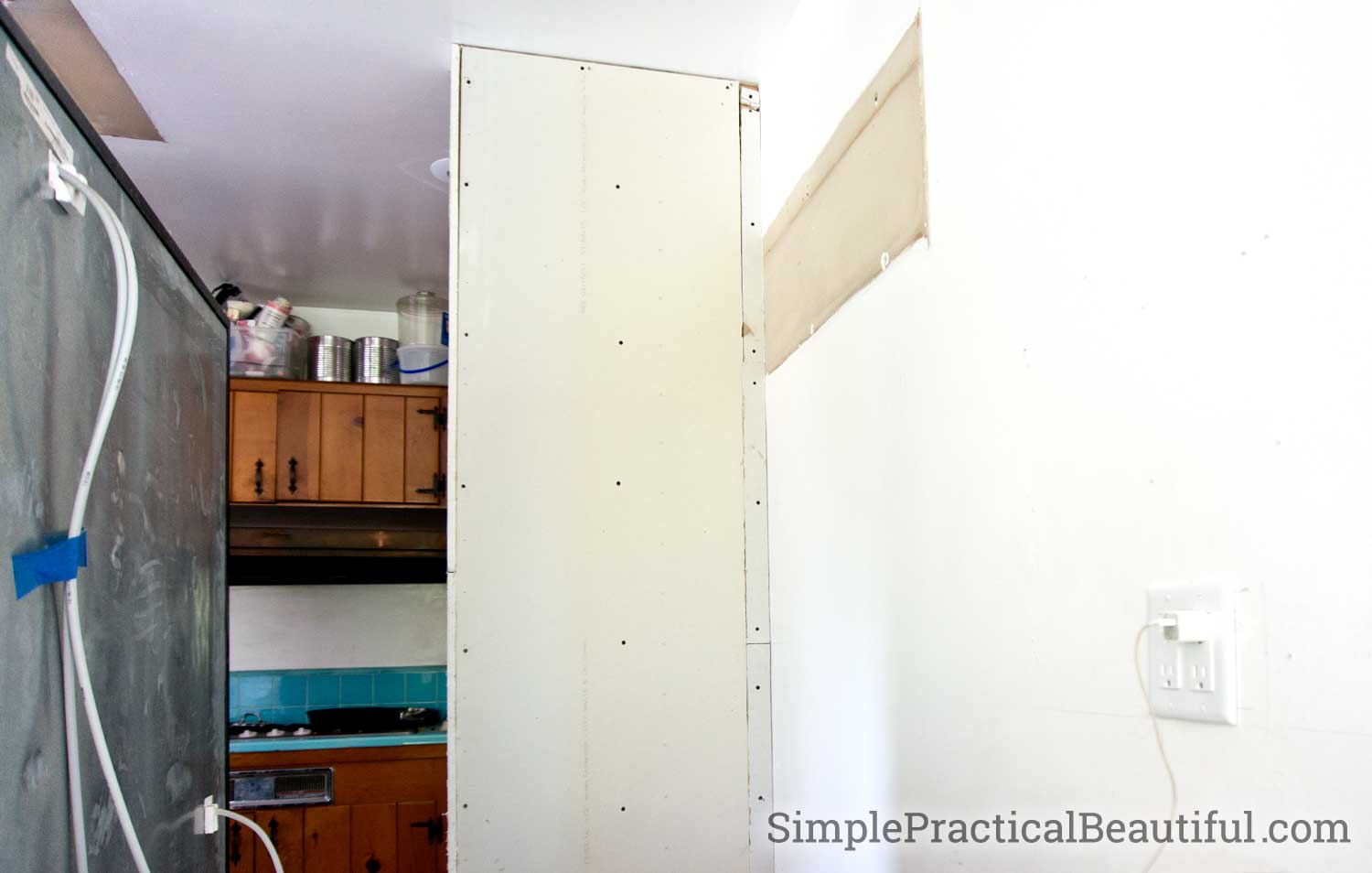 I have to admit that the one piece of drywall wasn’t quite big enough and we probably should have bought two, but we saved money and created more work. We had to add extra pieces to the inside back of the wall, which also meant more taping and mudding. Once finished, it isn’t quite as smooth as the rest of the wall, but it’s behind the fridge, so I never see it anyway. 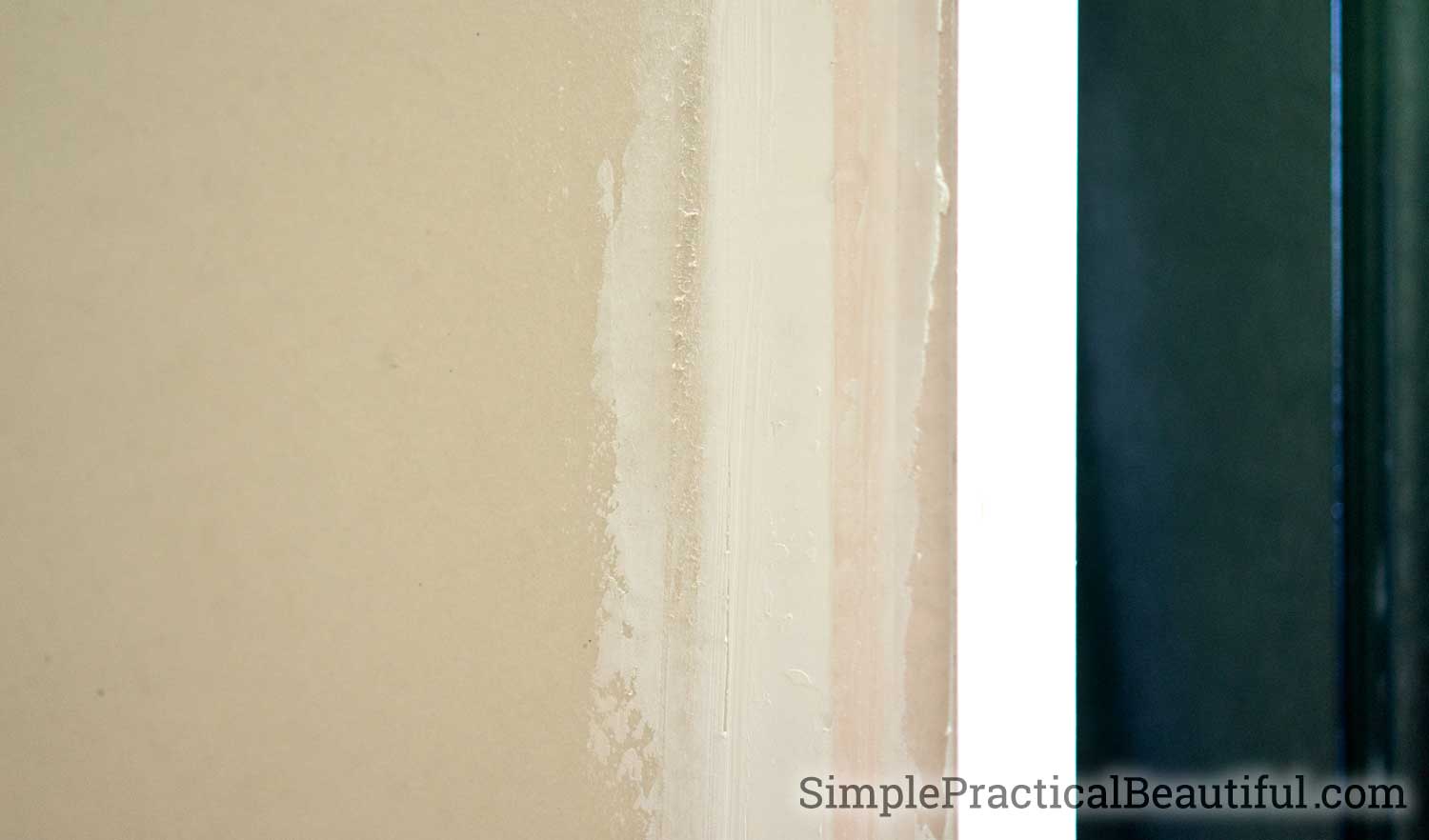 After adding mudding, texture, and Behr White Pepper paint, I love how the wall looks. Now I see a clean, blank surface when I come out of my room in the morning. When our whole kitchen renovation is done, I’ll add some decor to it. But it’s so nice not to listen to the refrigerator in our rooms anymore!