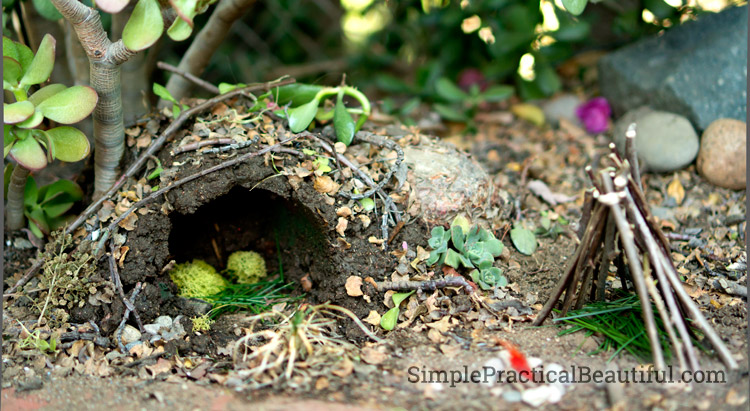 We’ve created lots of fun fairy houses and accessories for our backyard fairy garden, including a campsite with a teepee, campfire, and even a cave to explore based on a scene from Pete’s Dragon. 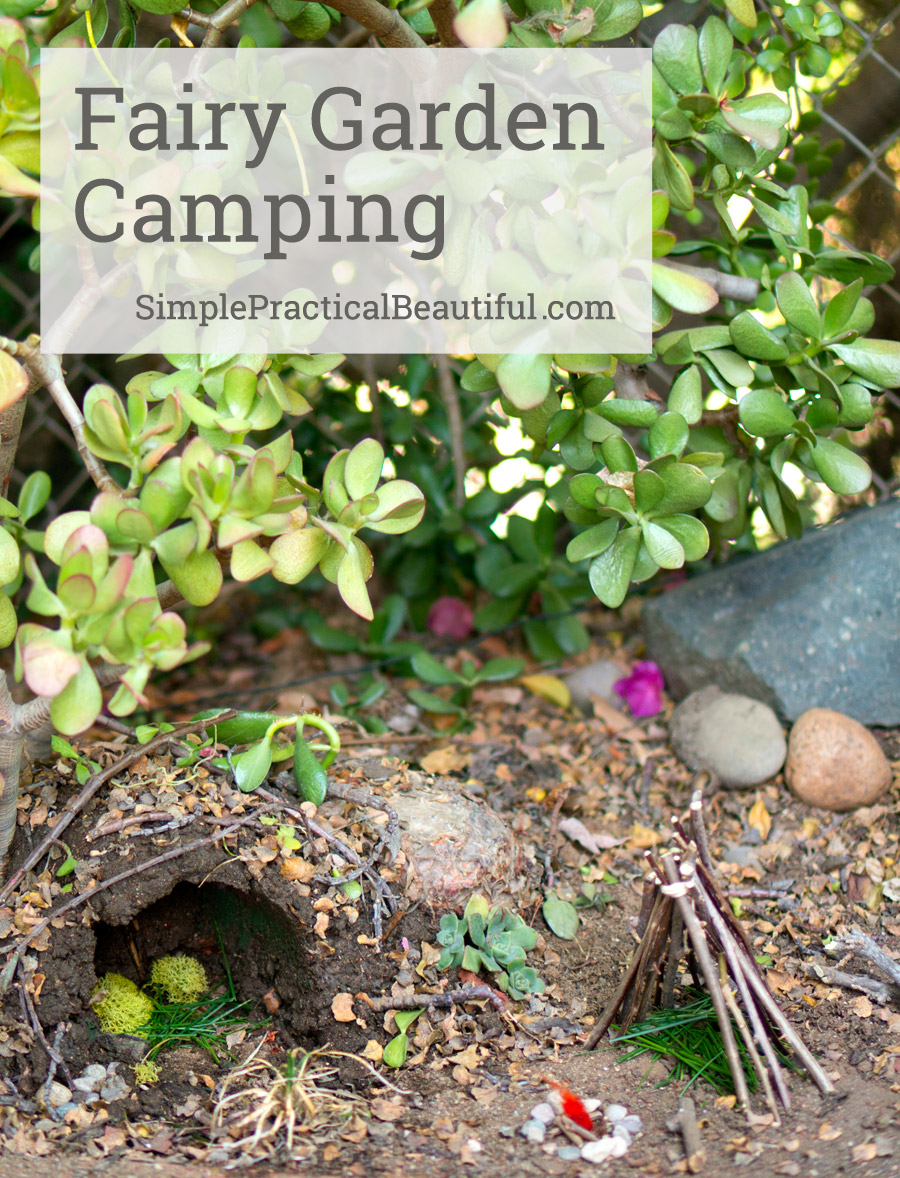 Since this post is the last one before school starts for us, I want to share a few of the many wonderful fairy garden creations that my daughters have been working on this summer. They’ve built an entire fairy village with some very cute accessories. They’re latest addition was inspired by the movie Pete’s Dragon.

Pete’s Dragon is a fun family movie about an orphaned boy who lives in the woods with a dragon he named Elliot. It takes place in the Pacific Northwest, so it has some gorgeous green scenery. One of my favorite sets is the campsite where Pete and Elliot live in the middle of the forest. It’s simple and rustic, but has everything that a boy and his pet could want. Or maybe it’s a dragon and his pet. 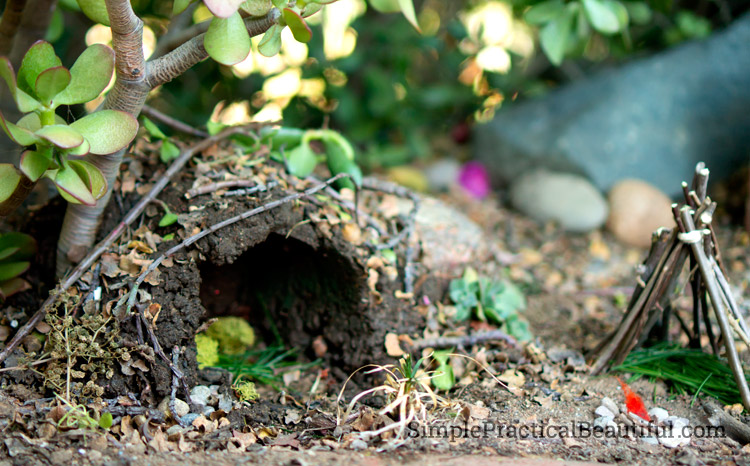 A Scene from Pete’s Dragon

After watching the Pete’s Dragon, we recreated that setting in miniature for our fairy garden. We started with a spot that had a nice, large, knobby root and built a cave next to it. The cave it made of mud from our yard. It was shaped around an old can and left to dry. 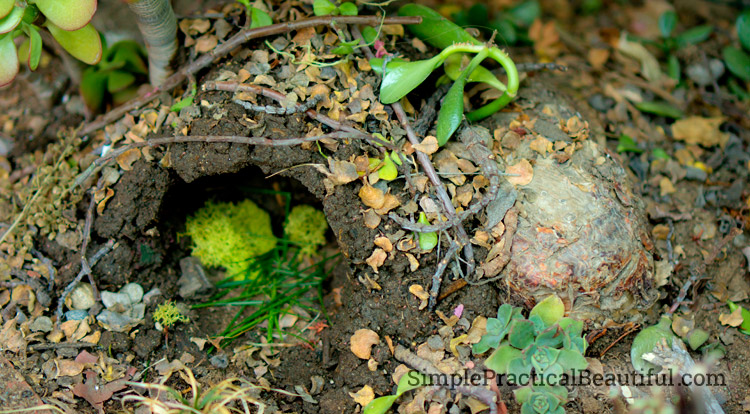 Like in the movie, the cave is below a tree. Okay, our tree is actually a small jade plant. But it makes a good fairy tree. 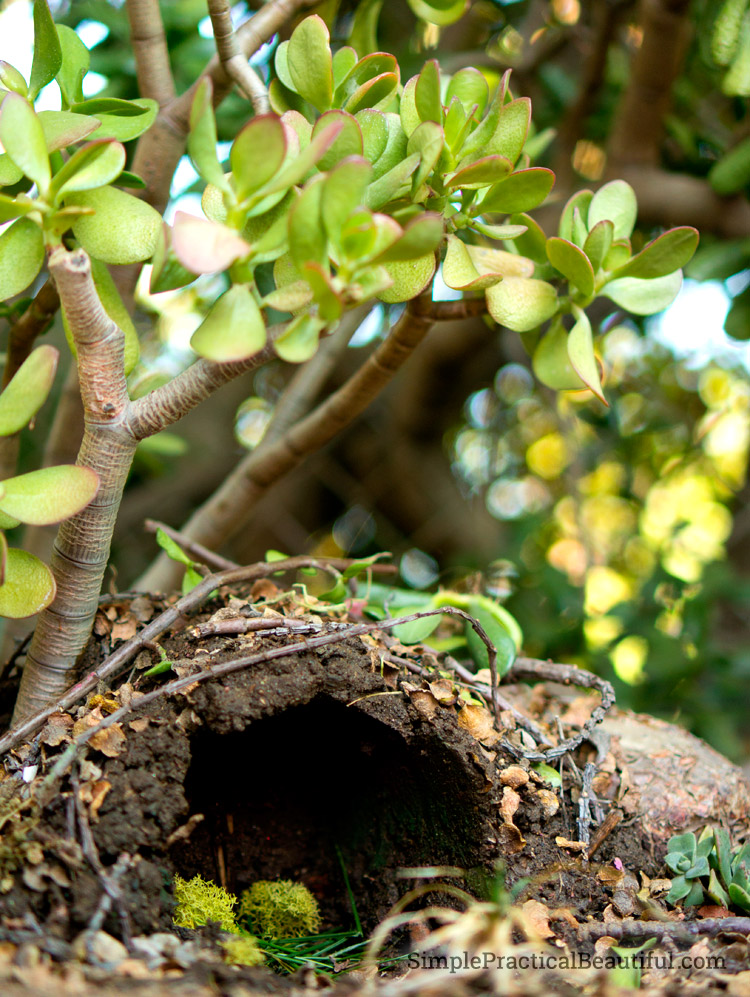 There’s even an eagle aerie at the top of the tree, like the one Pete uses for a look out. I’m sure our fairies will love it. 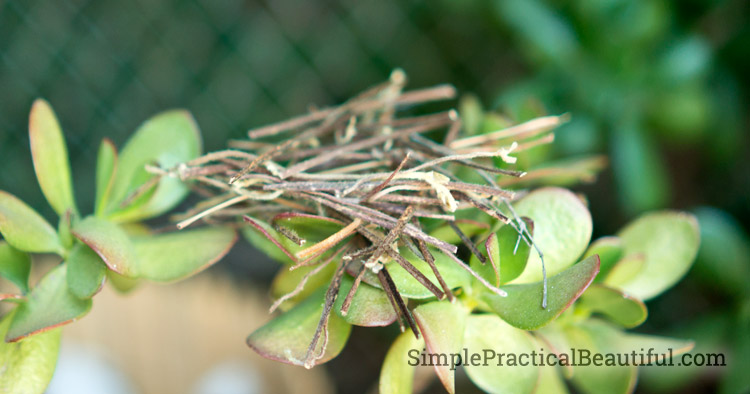 We also built a small teepee out of sticks tied together at the top. Inside is a matting of cut grass so that the fairies can sleep comfortably. 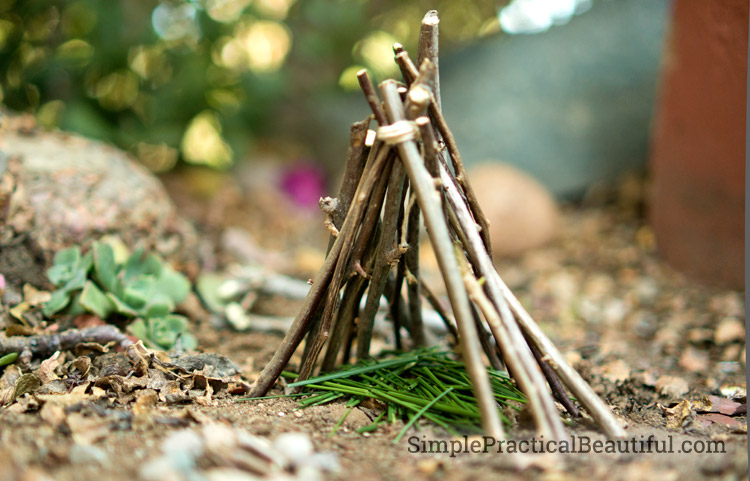 Finally, a little campfire made from sticks and a dyed cotton ball so the fairies can stay warm on their camping adventure. 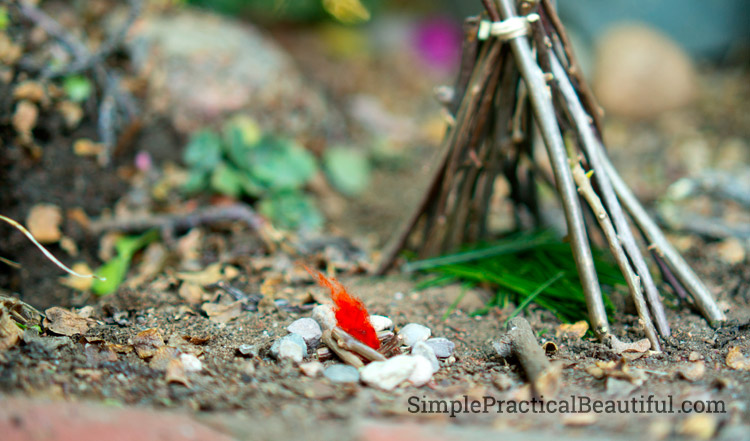 Now on to the rest of the fairy garden. The fairy garden is a two-foot wide strip of dirt next to our back patio. My girls have turned it into a fairy village.

Here’s where the rock fairy lives. My daughter, Audrey, love collecting rocks and has a million of them. Her dad suggested she use her cool collection to build a fairy house. 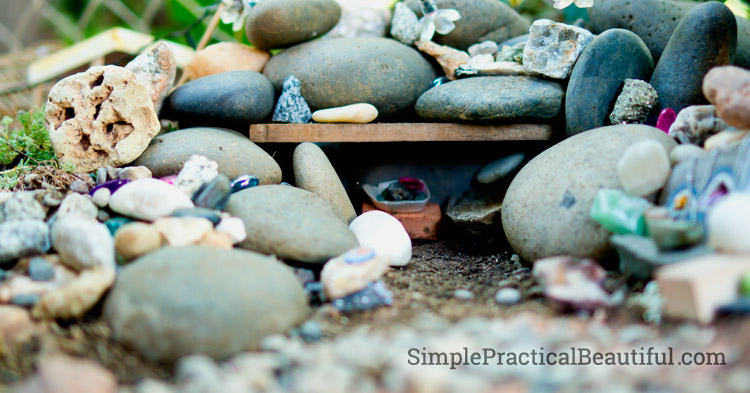 And the beach fairy’s house is white with a blue roof. It has a calm feel like the beach itself. My girls added plenty of shells from our beach trips. 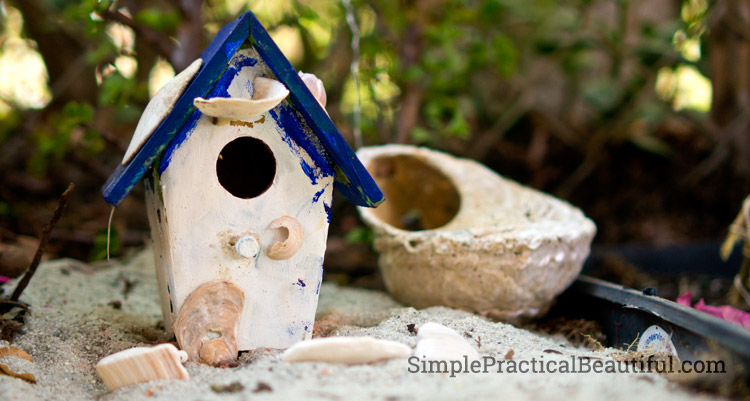 Jane got a few fairy garden accessories from her grandparents, including this bridge. She made a little stream to go under it with glass beads. 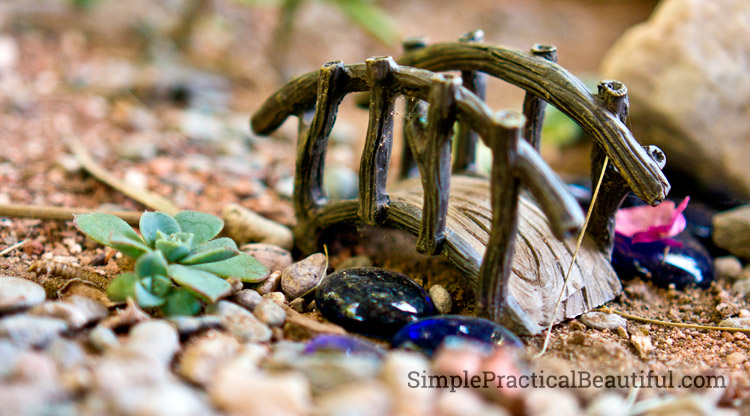 Audrey built this king-size fairy bed out of popsicle sticks and added moss and fake flowers. Plus a scrap of fabric for a warm comforter. 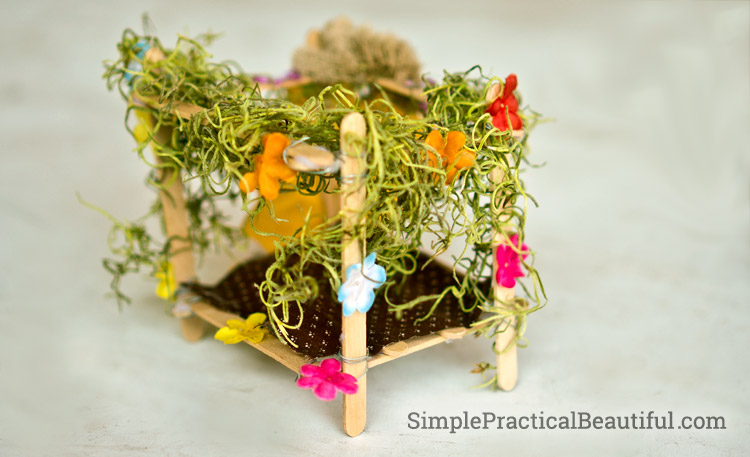 Here is a small succulent garden (succulents have survived the best in our garden over the hot summer). You can watch the video on how to make a fairy fence. 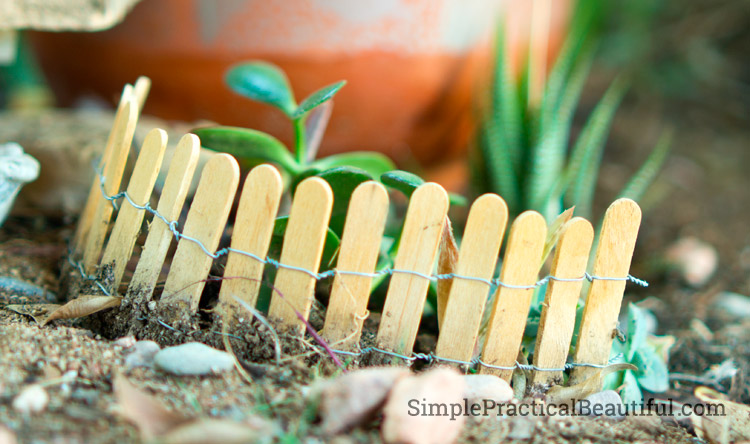 One fairy house in a flower-pot now has a beautiful gazebo the girls created with sticks cut from our yard and thin wire. 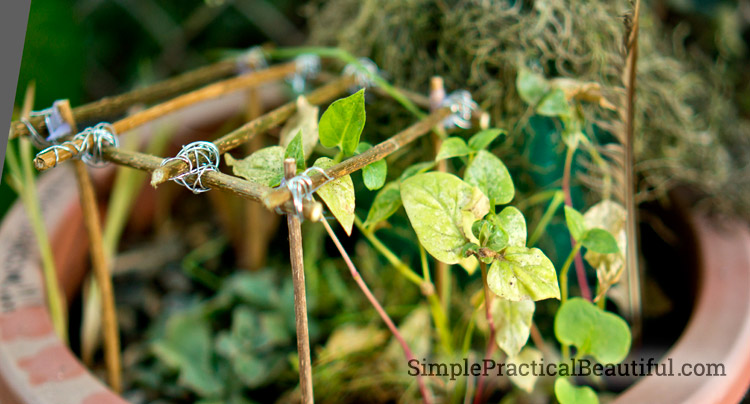 One a larger scale, the girls used an old wire basket to make a fairy greenhouse. It even has a table for potting plants. 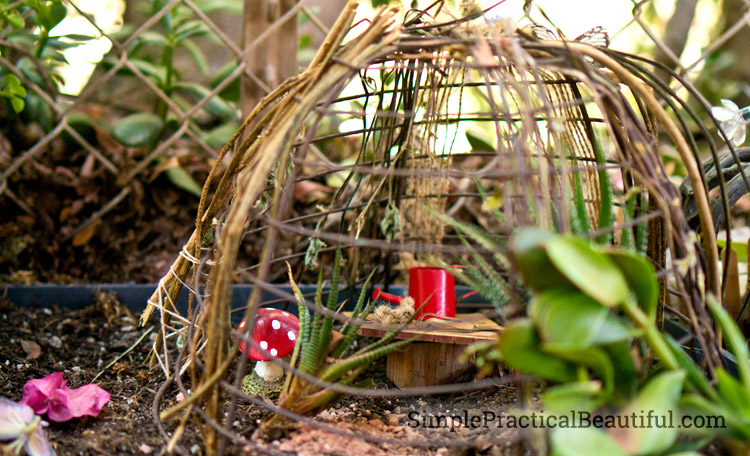 Jane sculpted these mushrooms from Sculpy, one of our favorite craft supplies. The large mushroom makes a table and the two smaller ones are chairs. This is a fairy restaurant.

And hidden behind some trees, is the perfect spot for a fairy picnic. The girls made this cute picnic table from cut popsicle sticks. 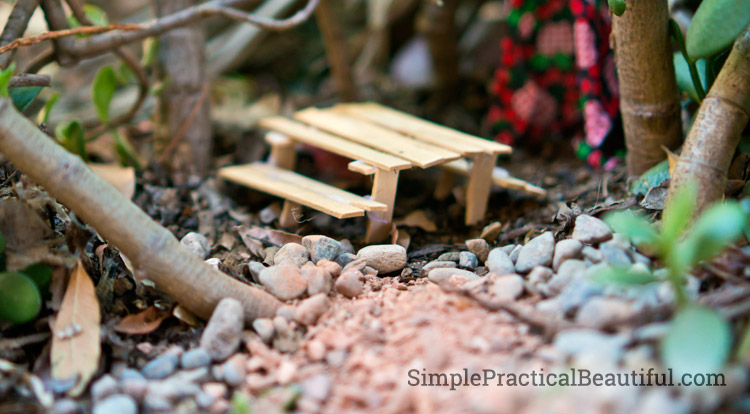 This is one of my favorite accessories. A little bowl of fairy yarn balls. It just needs some tiny knitting needles. 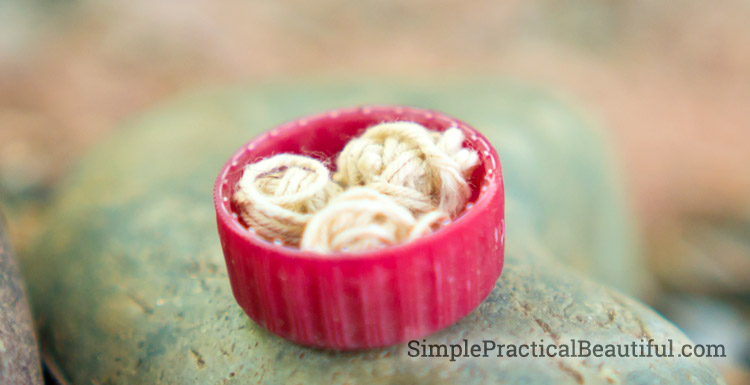 Jane spent hours building this elaborate fairy house. First, she glued gravel rocks together with wood glue—it’s strong enough to hold the weight. Next, she glued that rock sheet that onto an old can to make the shape of the house. She put a cup on top of the house for a roof and covered it with pine cone shingles. Then she added a small bottle painted black for the chimney. Jane even added some smoke coming out with a cotton ball. Finally, she glued on the door. You can read more about how to make a fairy door in my post on making a fairy house from a bottle. 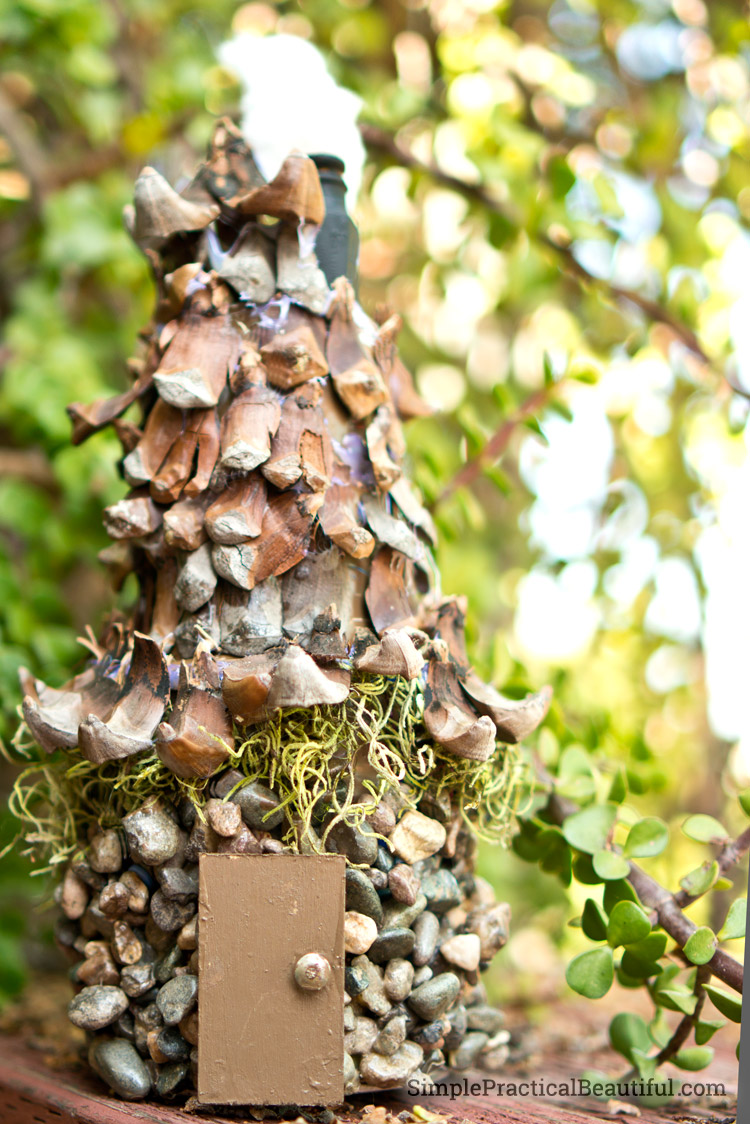 Finally, so the fairies can see their amazing miniature town, there in a gondola on some string that is strung high above the fairy village. 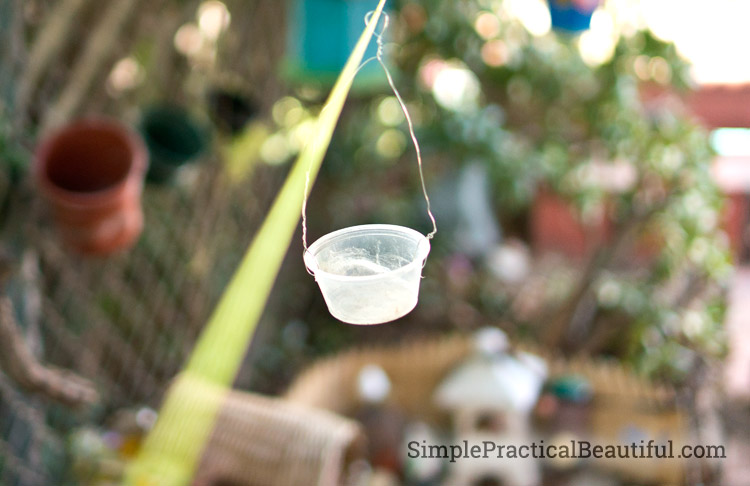 It’s been such a fun summer creating fairy garden magic with my daughters. I’m sure we’ll continue to enjoy this fairy garden in our backyard throughout the school year too.