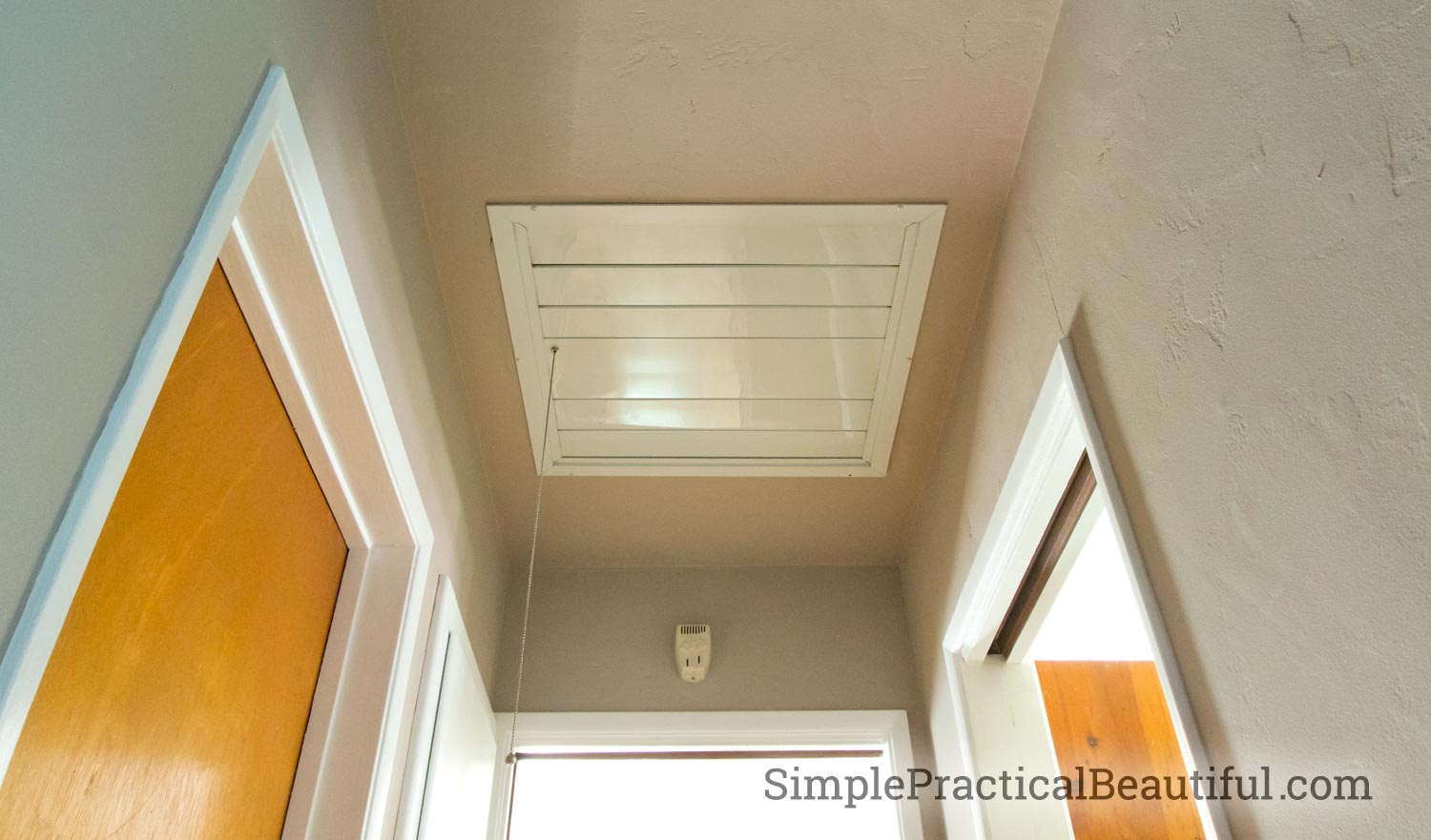 It’s August and it’s hot. Since we don’t have an A/C, our whole house fan is the only thing that gets us through the sweltering heat of summer. We installed it ourselves two years ago, and it has been a life saver every summer since.

It used to frustrate me how cool it would get outside at night, but inside the house would stay like an oven. We would open all the windows and turn on all our little fans and still it would be 90 inside and 70 outside. Now the whole house fan brings all that cool night air inside. Oh, the relief!

The whole house fan pulls outside air into the house.

Our whole house fan cost us around $300, which is much less than installing an air conditioner. Plus, it only costs pennies to run each evening which keeps our summer energy bill extremely low, even in southern California.

A whole house fan works by pulling air from inside the house up into the attic, then the hot air in the attic gets pushed out through attic vents. As the hot air gets pulled up out of the house, air from outside the windows gets pulled inside and cools off the house. We open the windows of the rooms we want cooled down, usually our bedrooms and the family room.

Just FYI, there are companies that sell, and will even install, near-silent whole house fans. Their price tag is a little higher, and we were desperate to install one ASAP that summer, so we went with the cheaper, though very loud, DIY option. The graphic to the left is from AirScape, which offers quieter fans.

Our house is about 1400 square feet, so we bought a 24-inch direct drive whole house fan. We bought ours from Home Depot because we needed to install it that day, and they had it in stock, but this is a similar whole house fan from Amazon so you can read more information about the requirements and the reviews. 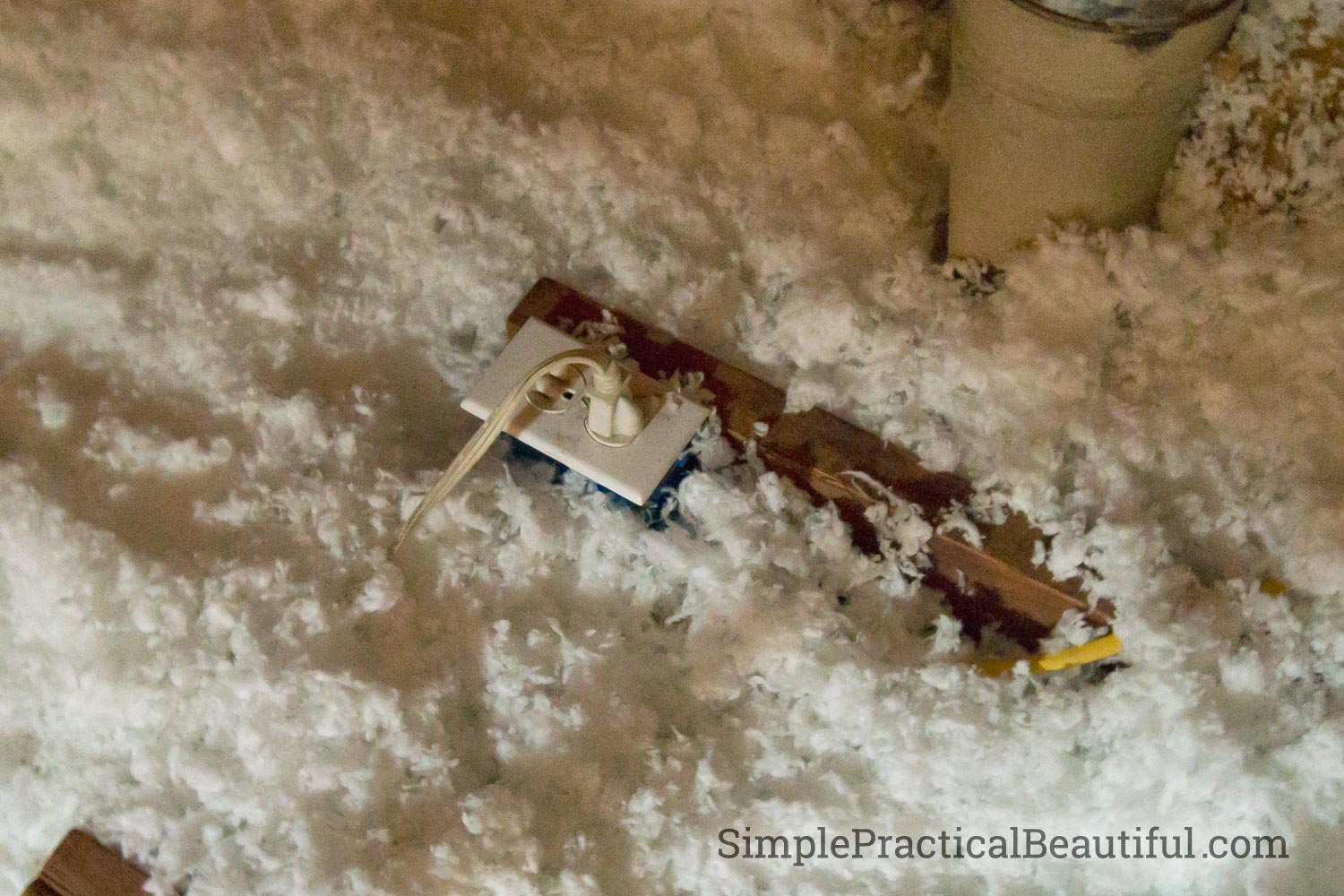 When we upgraded our electrical system, we installed an outlet in the attic, which now powers the house fan.

I wish I had some great pictures to show how a whole house fan is installed, but unfortunately I was pregnant and sick and lying on the couch giving moral support during the installation. So, here’s my best description. Please ask questions in the comments section below if anything doesn’t make sense. It was a fairly simple process.

First we picked a place in the center of our house for the fan to go, then my awesome DIY husband poked a nail through the ceiling there. The nail showed him where the fan would go when he went up to the attic. It’s hard to tell exact locations up in the attic, so the nail helped a lot. Once he found the nail, he figured out which joists the fan would sit on and push down through the ceiling along those to mark the spot. You could probably also use a stud finder and save a trip up to the attic. 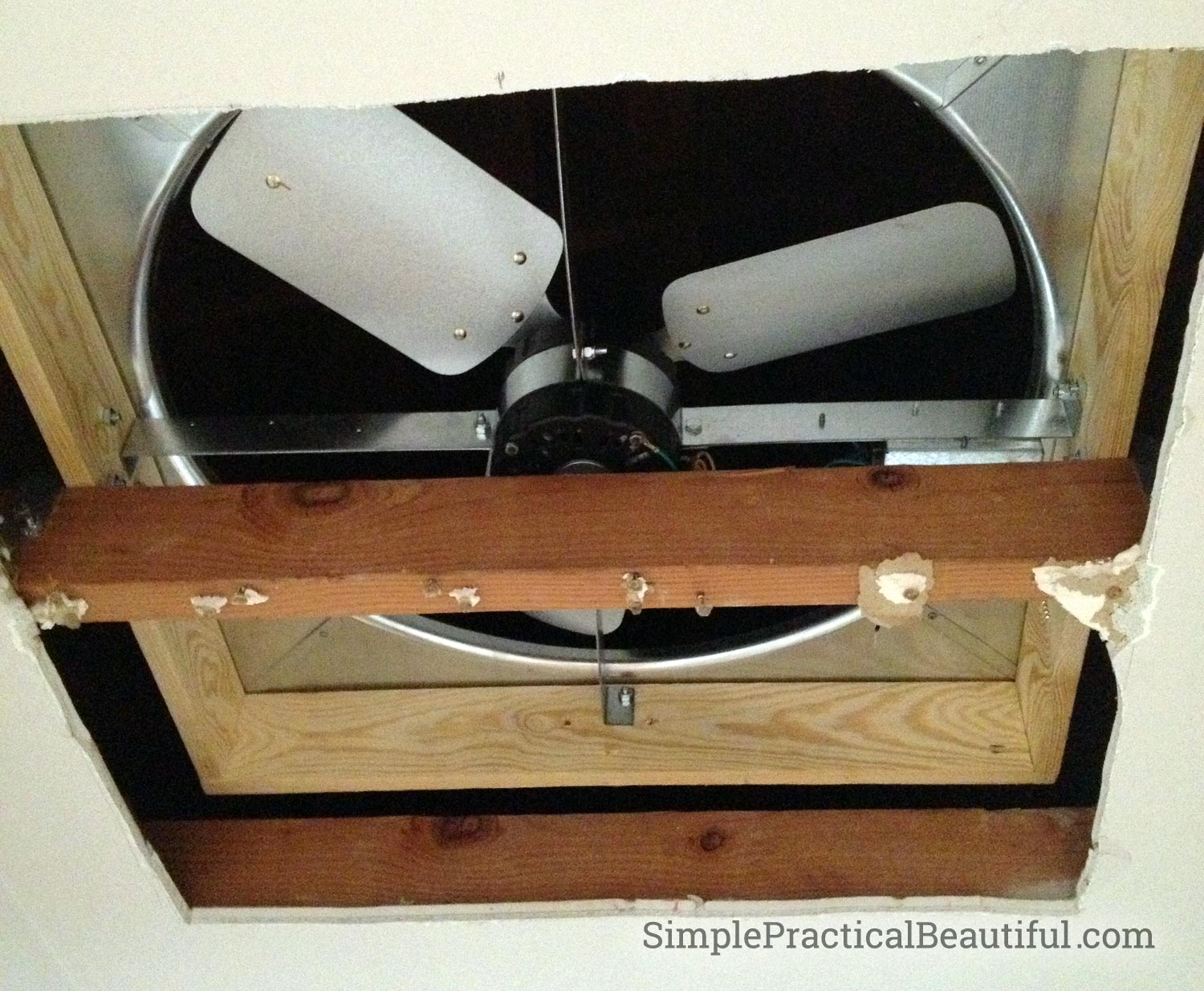 The installed fan before the vent cover was put on.

The fan came with a cardboard template, which he traced onto the ceiling, then used a Sawzall reciprocating saw (like this one) to cut along 2 sides of the square, being careful not to cut into the joists he had marked. There is a third joist that goes along the center of the fan, so he cut out two rectangles between the three joists, leaving the  middle joist uncut.

Next, he pushed the whole house fan up into the attic through one of those rectangular holes and placed it on the center joist and attached it to all three joists. The fan came with corrugated plastic to cover the gaps between the fan and the ceiling. We duct taped that all together with the fan onto the ceiling to prevent hot air from coming back down into the house from the attic. 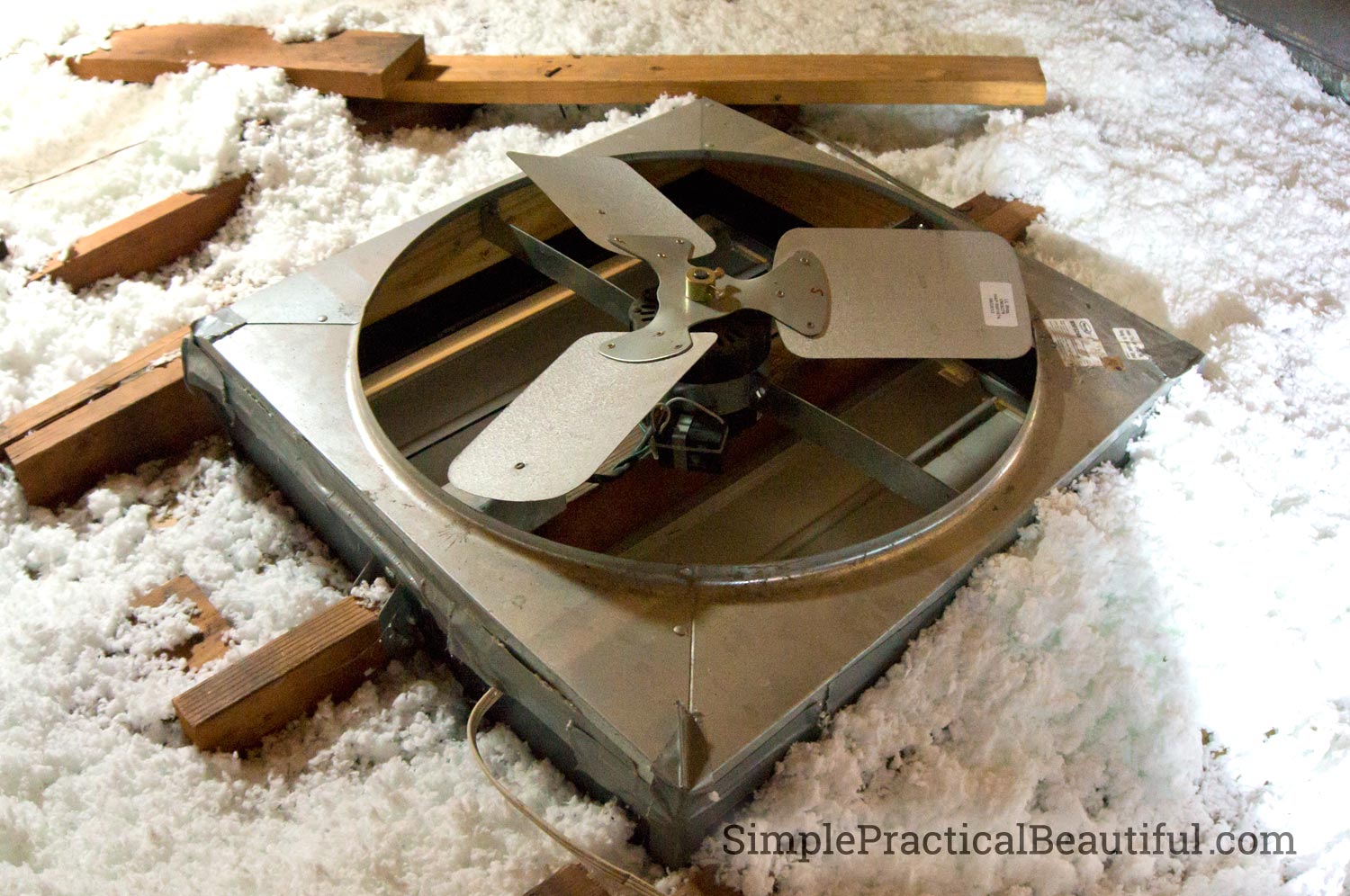 The whole house fan in the attic, surrounded by insulation.

Finally, he attached the pull cord to the fan and put the shutter vents (the cover) on the ceiling. When the fan is off, the vents are closed. When the whole house fan turns on, the suction opens up the vents. 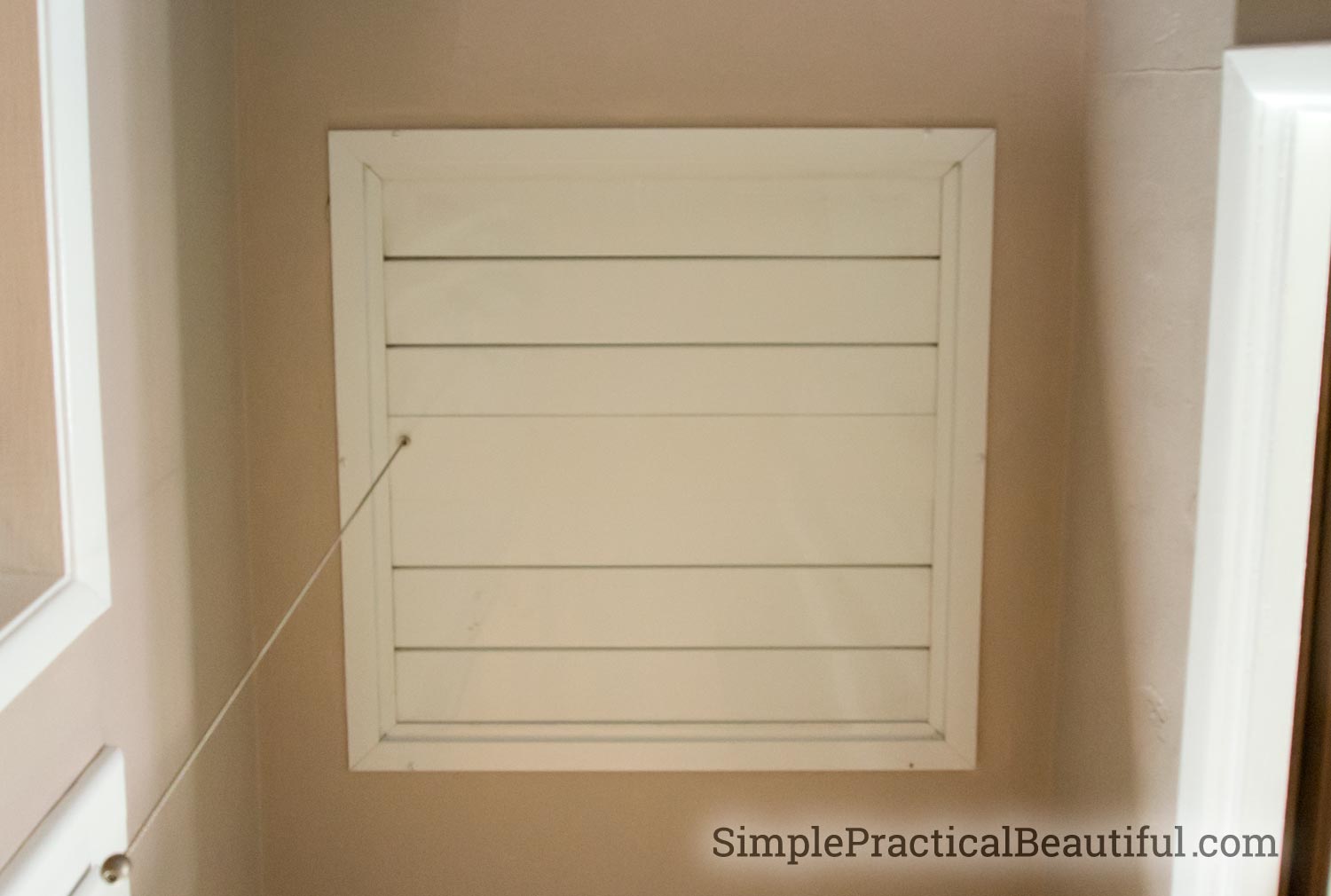 The shutter vents and pull cord.

On those hot days with cool evenings, we turn on the fan around 7 or 8pm and let it run for a few hours until we go to bed. I think it’s actually great white noise for the kids to fall asleep to, but it keeps me awake, so I turn it off right before I climb into bed. Occasionally, we will turn it on for a half hour or so in the morning to get the house as cool as possible before the heat of the day sets in. 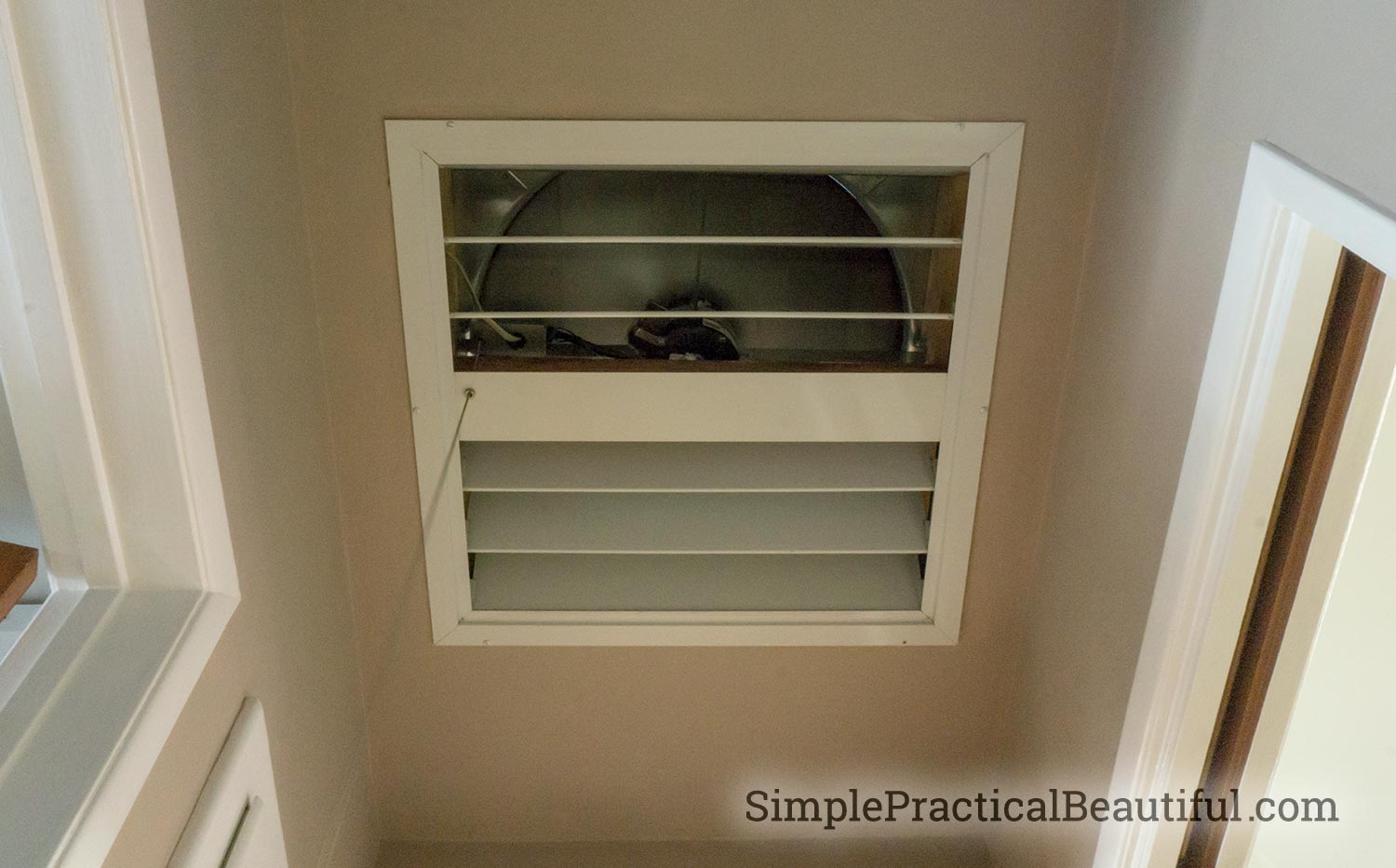 When the fan is turned on, the shutters open and the fan pulls in hot air.

What do you do to stay cool in the heat of the summer? Please share any low cost ideas in the comments below.

Added to the following link-up parties: