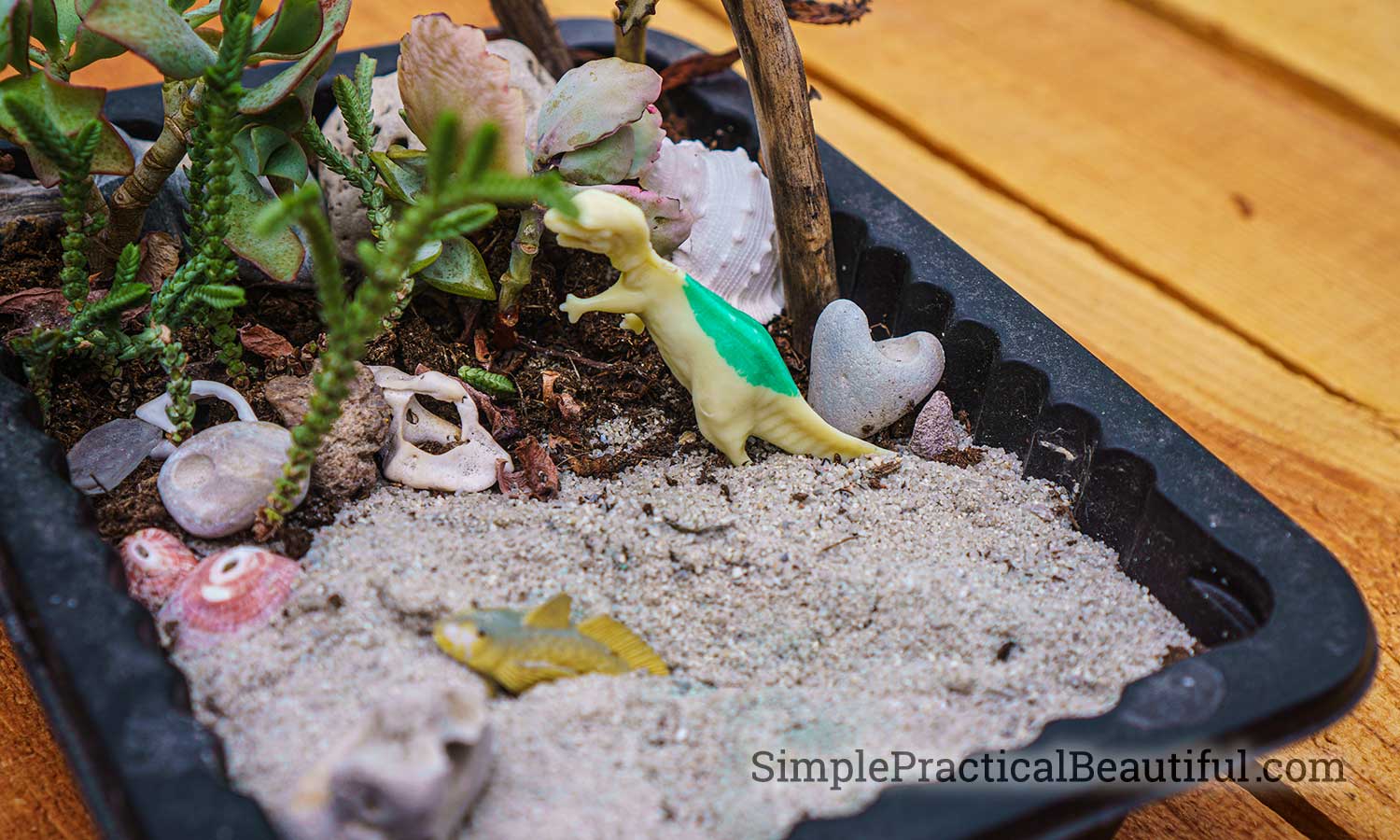 After watching Prehistoric Planet on Apple TV+, we created these dinosaur-themed fairy gardens to study the different habitats that dinosaurs inhabited during the Cretaceous times shown in the educational and visually-stunning new tv series.

Forget Jurassic World and its stereotypical and made-up dinosaurs. Prehistoric Planet uses the latest visual technology to show you the latest research about what real dinosaurs and other prehistoric animals were really like. It’s fascinating.

I was raised by a mom who loves archaeology and paleontology, and now I have a son who is obsessed with dinosaurs, so I have spent a lot of my life learning about dinosaurs. In all my time learning about dinosaurs (mostly not by choice), the new tv series Prehistoric Planet has to be one of the most entertaining and informative shows about dinosaurs I have seen. Those of you who have suffered through Dino Dana, you are in for a treat. Watch the trailer here.

Plus, Prehistoric Planet is a great way for kids, or anyone, to learn about ecosystems in different climates. Then create a tiny dinosaur terrarium to further explore where and how these amazing animals lived. It’s a fun summer project that would work well for homeschooling too.

Dinosaurs on the Coast

The opening scene of the first episode of Prehistoric Planet is so impressive that it inspired the cover image (above). It also inspired our first dinosaur landscape. The T. Rex is walking onshore, while a prehistoric marine reptile waits in the water and a pterosaur flies above.

We used succulents for all of the plants because they are so easy to clip off a piece and put it in a new planters. We tried to use plants with smaller leaves to look more realistic. We also added to the landscape with sticks, rocks, shells, mulch, and sand.

My son put the pterosaur up on top of a tall stick to make it look like it was flying.

Obviously, none of these plastic dinosaurs are realistic. We used the toy dinosaurs we had. If you want to see what these dinosaurs really looked like, watch Prehistoric Planet. This fish toy is the closest thing we had to a tuarangisaurus.

My son used his sandbox to recreate the desert scene. There was no reason to include a lot of plants because the prehistoric deserts of Asia it was very dry. He recreated the scene from the show when the carnotaurus attacks the velociraptor near a sauropod carcass. Again, our toys do not look like real dinosaurs. You will have to watch the show to see how very awesome velociraptors really looked.

Quetzalcoatlus Near a Freshwater River

Our favorite part of the Freshwater episode showcased my son’s favorite pterasaur, the quetzalcoatlus. The largest of the pterasaur, this prehistoric animal laid its eggs in a nest near a freshwater river.

We used a giant plaster egg that was leftover from my son’s dinosaur birthday party. The quetzalcoatlus did have huge eggs, although not quite this large in proportion. We created the landscape in and around the egg because it was big compared to the pot.

Since it’s almost summer, we couldn’t realistically create an ice world for our tiny dinosaurs. Instead, we focused on the part of the Ice World episode where olorotitans escaped the cold by living near a volcano.

The olorotitan is boring it’s egg in volcanic soil to keep it warm enough in the icy arctic conditions. We’re still working on building the actual volcano. (We’re still negotiating how big it will be and how much explosion will happen when it erupts.)

Watch Prehistoric Planet on Apple TV+ and then create your own miniature dinosaur landscapes. We also got some inspiration and ideas for our landscapes from the book Tiny Dino Worlds.