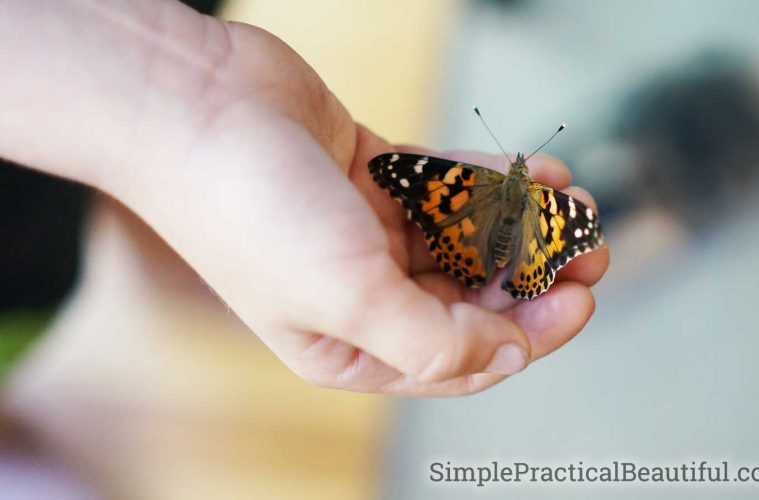 Grow your own butterflies and watch their life cycle as they turn from caterpillars into chrysalis.

My son’s kindergarten class planned to study the life-cycle of butterflies at the end of the year by watching live caterpillars turn into butterflies. Unfortunately, with distance-learning this year, my little kindergartener only got to watch videos about it online for school. So we decided that a fun summer activity would be to study butterflies in our home and it was a huge success!

Insect Lore has a few different kits on Amazon.com, so it’s a little confusing when deciding which butterfly kit to purchase. There’s the complete butterfly growing kit which includes everything except the caterpillars–it comes with a voucher to have the caterpillars shipped separately. This is so you can give this kit as a gift without worrying about caterpillars growing inside the box. We bought the cup of caterpillars refill kit. The refill kit costs less than the whole kit because it doesn’t include a netted habitat for the butterflies or a sponge for their food. Both were easy to replace with stuff we had at home. There is also the live caterpillars cup of caterpillars that doesn’t include the chrysalis stand but comes with 4 plastic figurines of the stages of a butterfly’s life cycle. I would order this last kit if I ordered it again because it would have helped my son to be able to touch and play with something instead of just watching the caterpillars.

When the caterpillars first arrive, I was worried that they were all dead, especially after reading a couple of negative reviews on Amazon. But after waiting a day or so, they all woke up and started eating. I found an FAQ page on Insect Lore’s website that explained their hibernation and everything else. It was really helpful throughout the whole life cycle.

The funny thing is that one caterpillar took a day or two longer than the rest to wake up. (I thought we had just lost him, but he was only slow.) He was a day or two behind the rest of the caterpillars for his whole life cycle: growing, chrysalis, even emerging as a butterfly.

The caterpillars come in a jar with food, so they eat and poop a lot. Just a heads up, be prepared for lots of discussions on insect poop. The caterpillars also create webs that would normally help them hang onto a leaf. I had no idea they did this and I was worried that somehow a small spider had gotten inside at first. Luckily, that FAQ page explains everything.

The caterpillars all climbed to the lid of the jar and then just hang there. I always thought caterpillars actively made their chrysalis, but nope, they just slowly turn into it. The process was kind of fascinating to watch.

After a few days, the butterflies emerged from their chrysalis and slowly unfolded their wings. They excrete meconium, a reddish liquid, so eventually we put newspaper at the bottom of the habitat to protect my table.

Since we ordered the caterpillar refill kit, we had to create with our own enclosed habitat. We used a mesh laundry hamper from the dollar store with a towel covering the top. We put the chrysalis inside after looking at them for a day or two and the habitat worked well. The butterflies secrete meconium when they first emerge, so the mesh got a little stained.

Since our kit didn’t come with the sponge for butterfly food, we put a small piece of fresh fruit into the habitat for the butterflies to eat. It was interesting to watch them eat it.

My son’s favorite part of this whole process was when we released the butterflies into our back yard after a few days of watching them in their habitat.

The didn’t fly out right away, so he got a couple of them to crawl onto his hand, being very careful not to touch their wings. He held each one like this for a minute or two and then they flew away and we chased them around our backyard watching them.

Don’t forget to order your own butterfly kit. You won’t be disappointed. We are thinking of ordering the ladybugs next (especially since they will eat the aphids off my roses)!