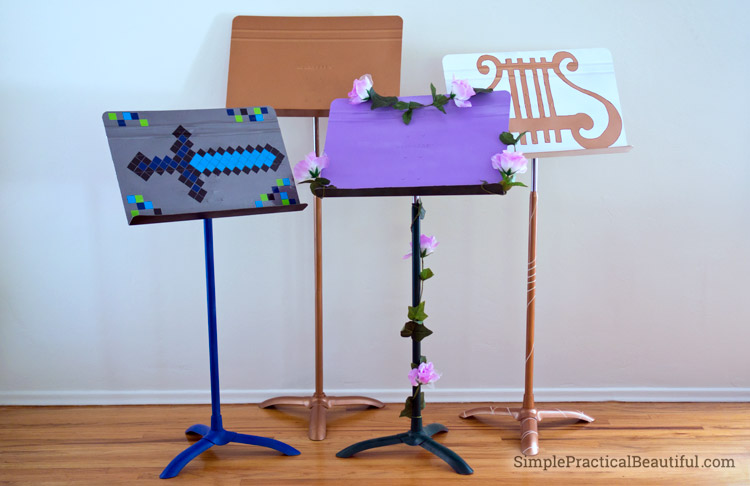 4 Ways to Refinish a Music Stand

Anything can be refinished, including music stands. Here’s four ways to refinish and update a standard black music stand into something more artistic. 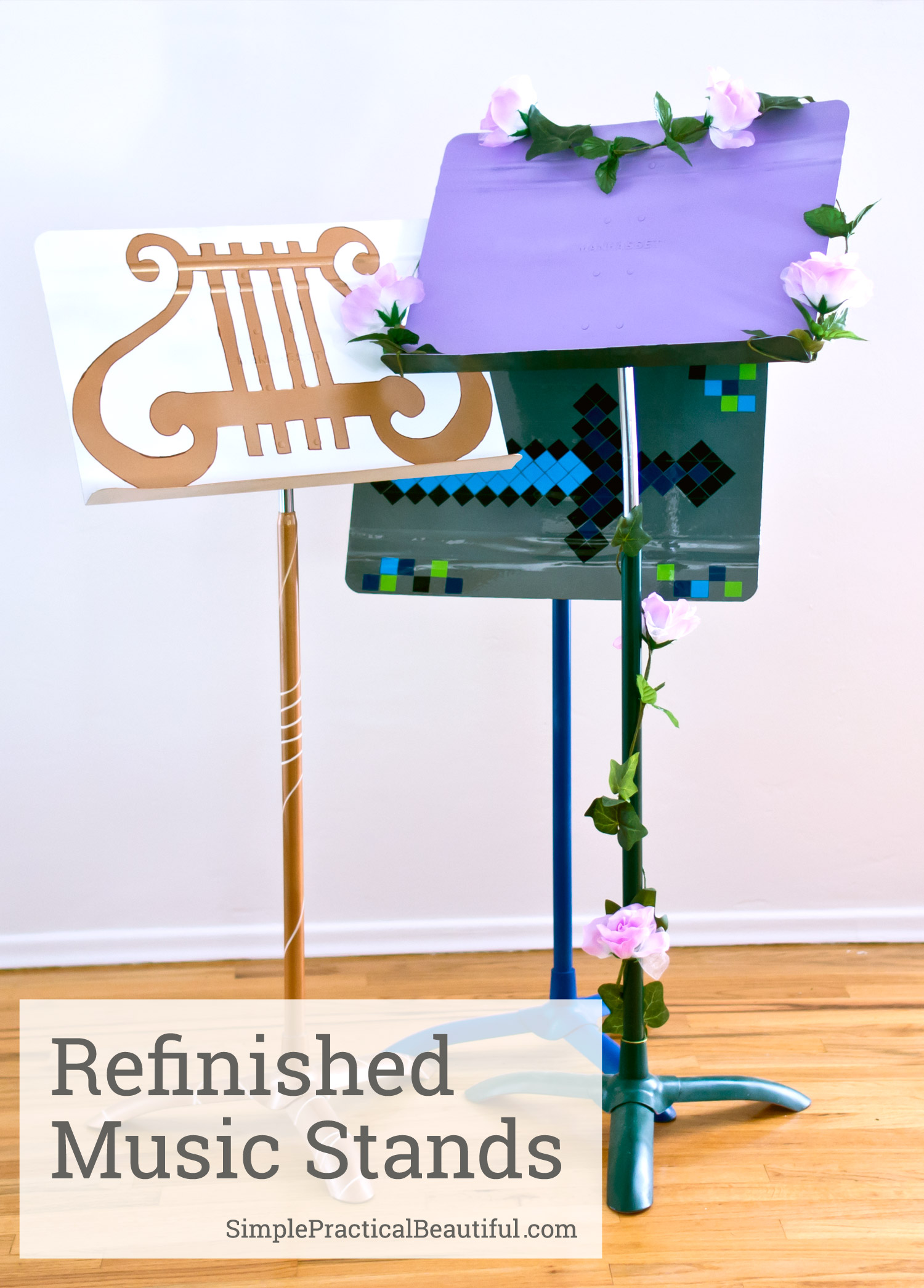 My daughters play the violin and viola in the East County Youth Symphony here in San Diego. It is a wonderful program that is offered tuition-free to all youth in the area. To keep it tuition-free, however, means fundraising. As part of their fundraising efforts, I refinished four old, rusted music stands to be sold.

The black music stands I started with had been well-used and then spent some time outside. The were scratched and rusted and in need of some repair. 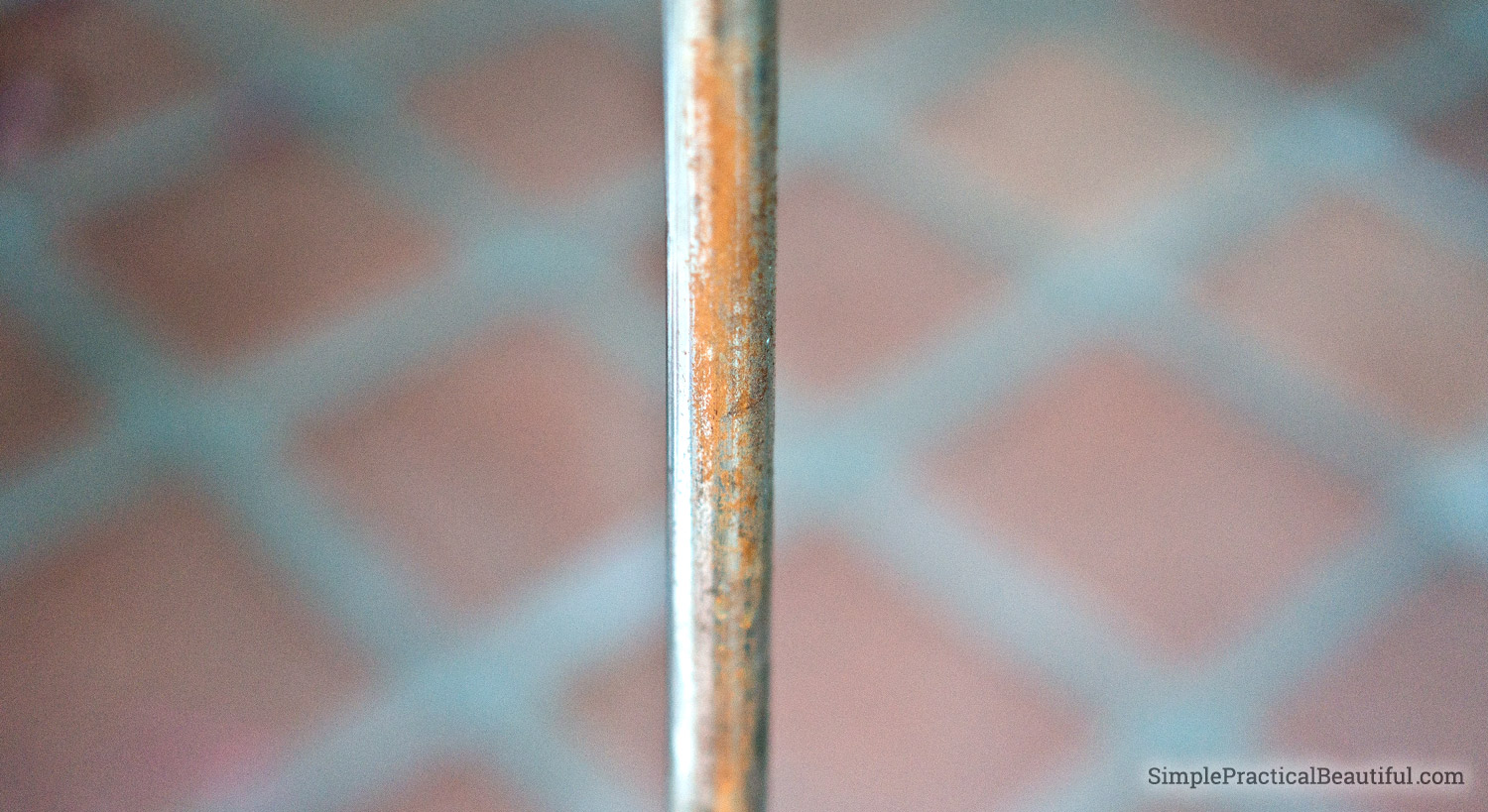 I started by scrubbing the rusted inside pole (the part that only shows when you raise the music stand) with some steel wool and WD-40. WD-40 is great at removing rust from metal and protecting it from future rust.

I also had to tighten the bottom bolt on a couple of the stands to make them less wobbly. 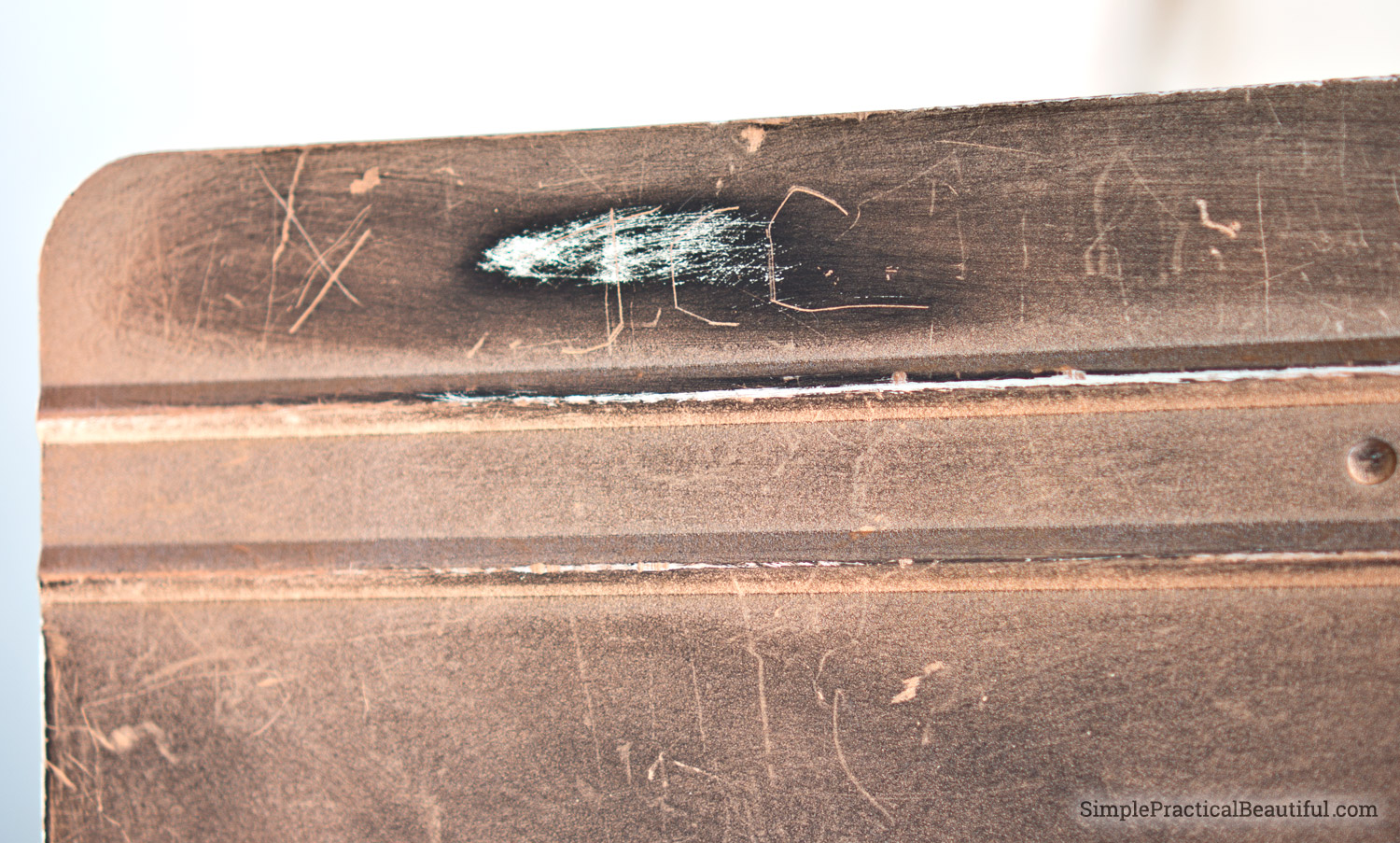 Next I sanded. Well, actually, I tried painting first, but found that all of the scratches and marks showed through. So I gave a light sanding to all of the places that were obviously scratched. 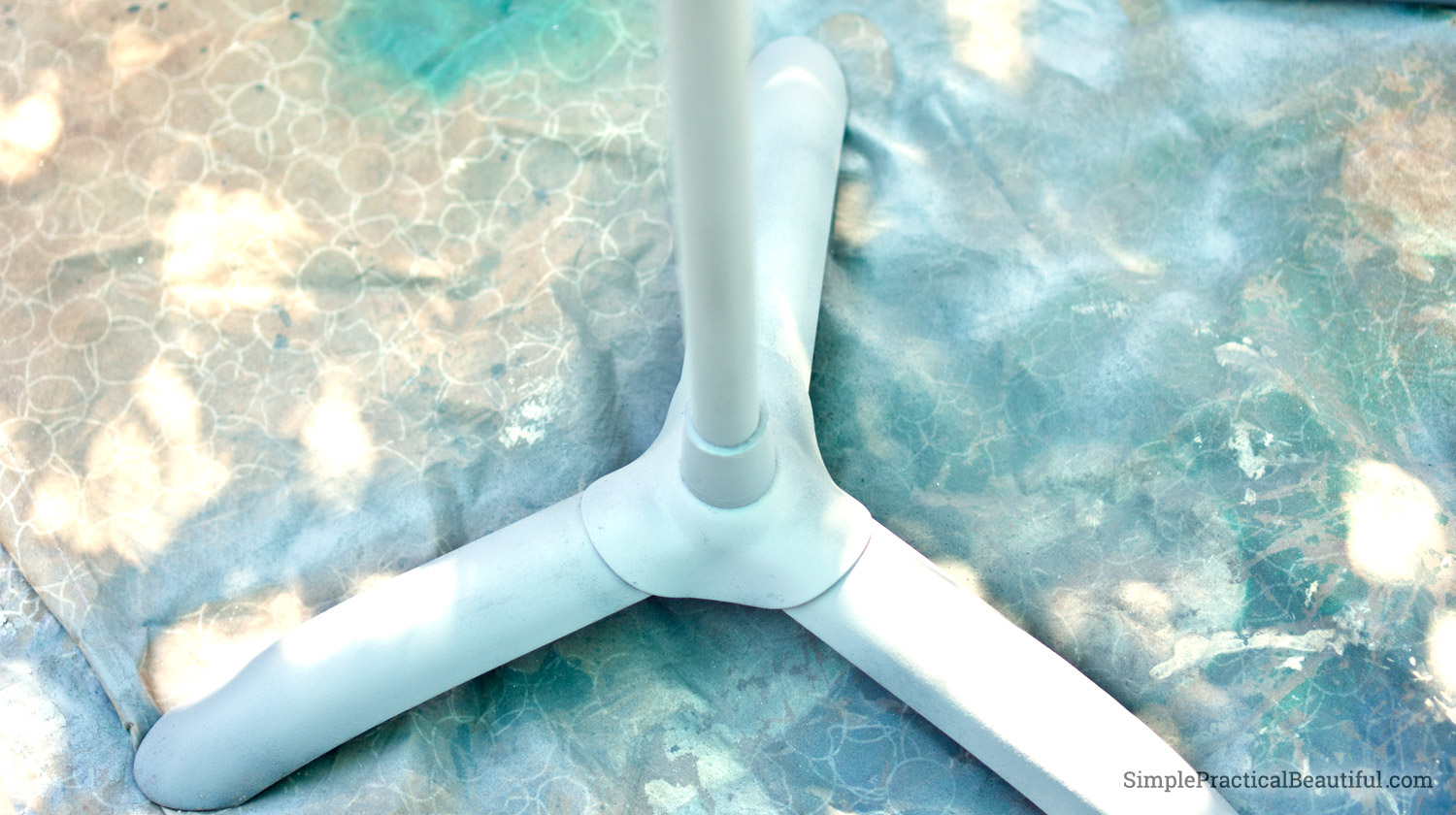 My last step of prep was to prime the stands. It covered up any left-over rust and scratches. Primer also makes the final coat of paint more durable and less likely to scratch or chip off in the future. Spray paint primer is cheap and worth the small amount of time it takes to give a base coat. 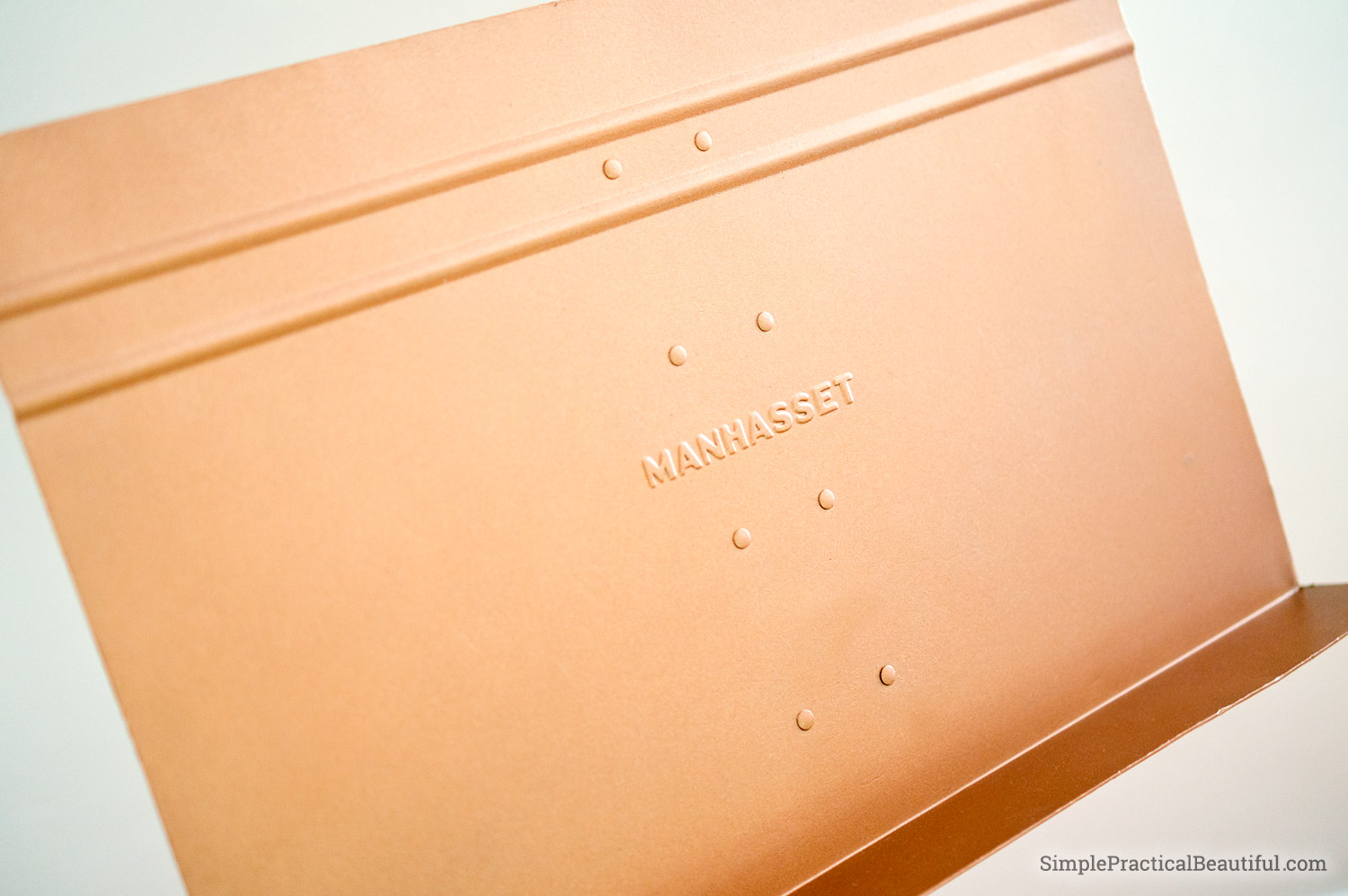 Rust-Oleum donated copper paint to this project to benefit our youth symphony. It’s a beautiful hammered copper color that looks stunning on it’s own. So, my first music stand, I simply painted it copper.

I also used Rust-Oleum’s hammered copper on the second music stand. But first, I painted the stand white so the copper color could be the design. 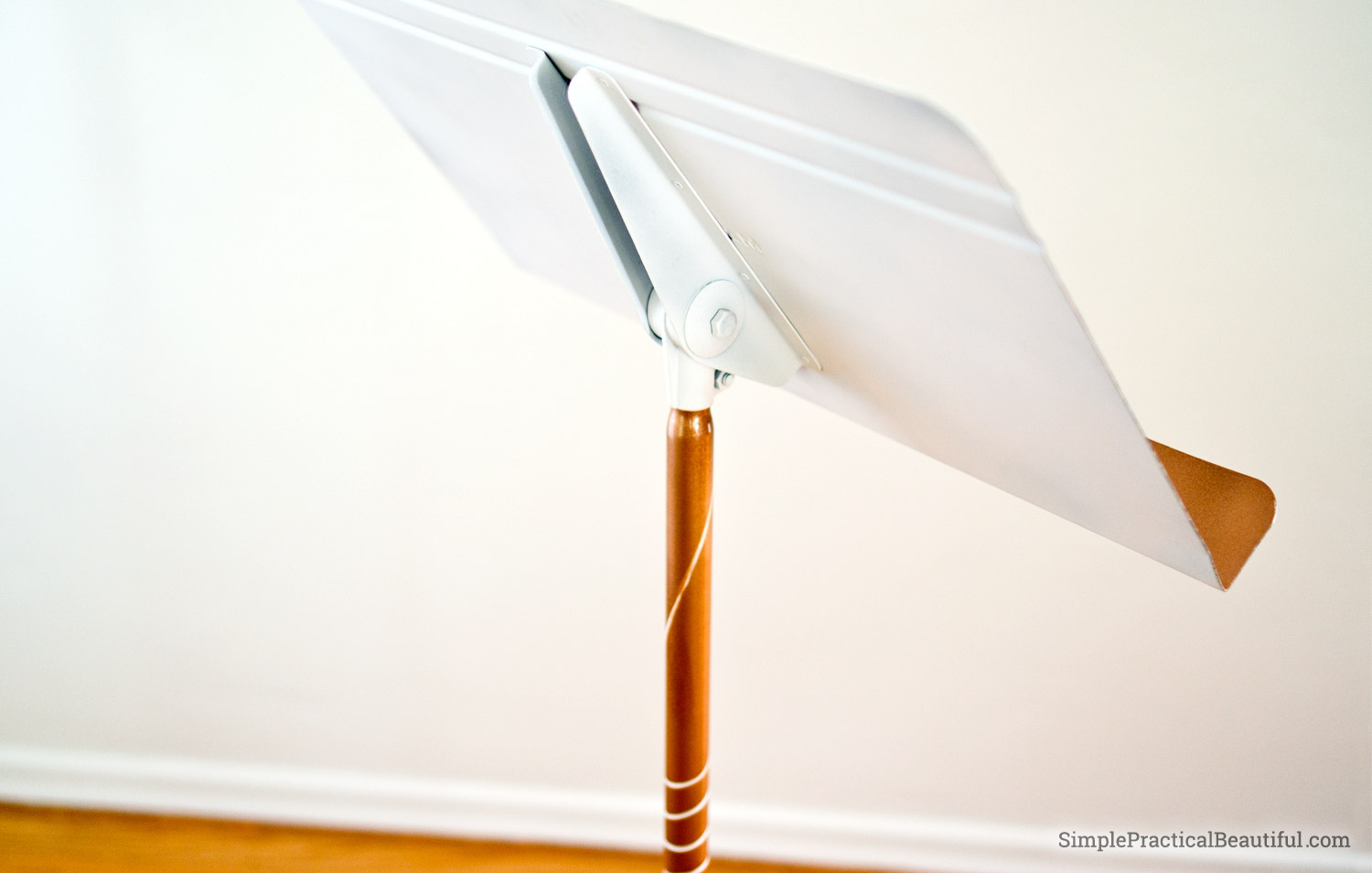 I traced a design of an old, stylistic music stand onto a large paper. The S-shape I did free-hand with a pencil, then used a ruler to create all of the straight lines. 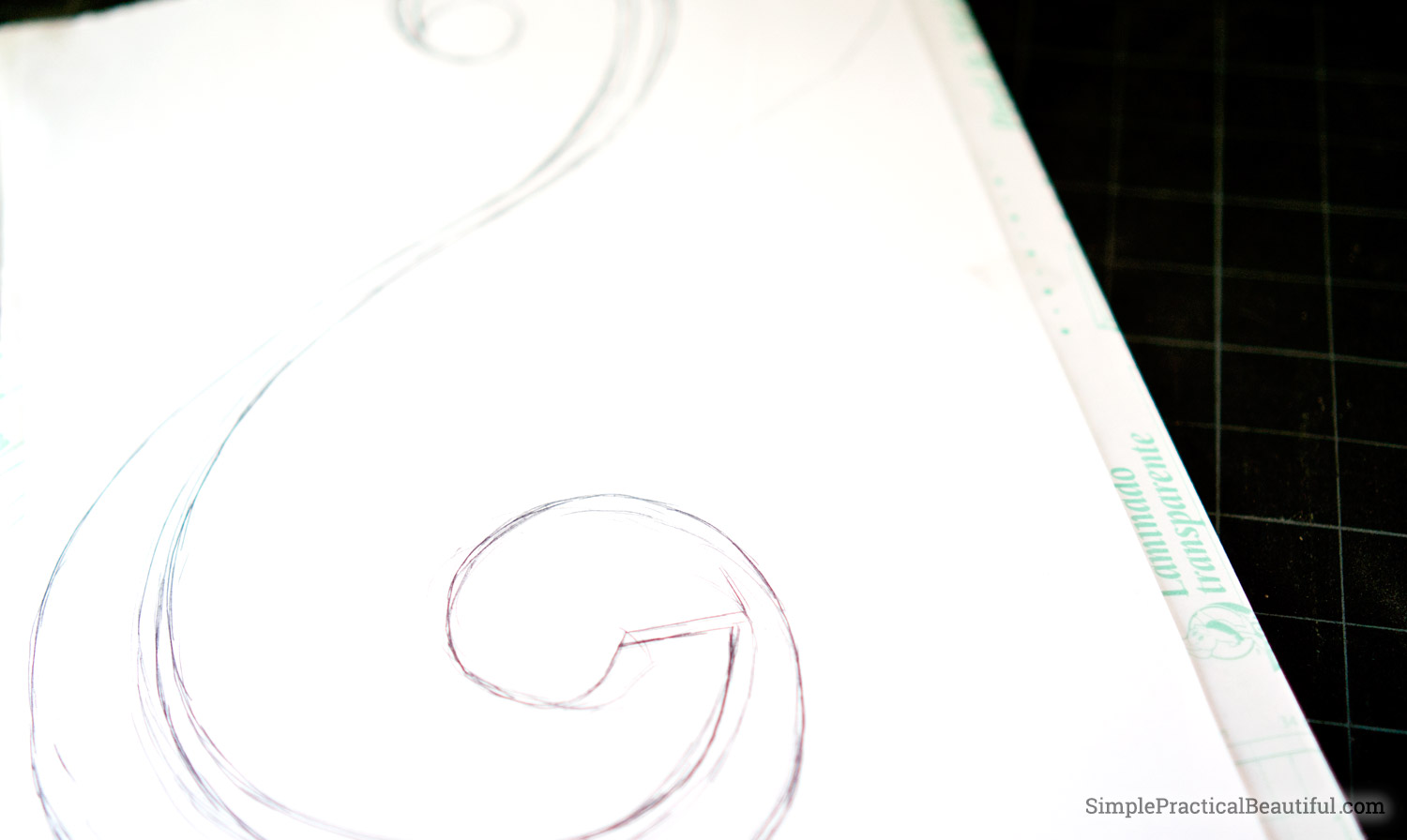 I tried several different ways to get the design onto the music stand until I found one that worked. Contact paper didn’t stick to the stand. I ended up using painter’s tape to make a large rectangle on my cutting mat. Then I traced the design on the tape and cut it out with an Exacto knife. It was still a little tricky to transfer the tape onto the music stand. I think if I owned a vinyl cutter, that would have been much easier, although the vinyl might not have adhered well either. 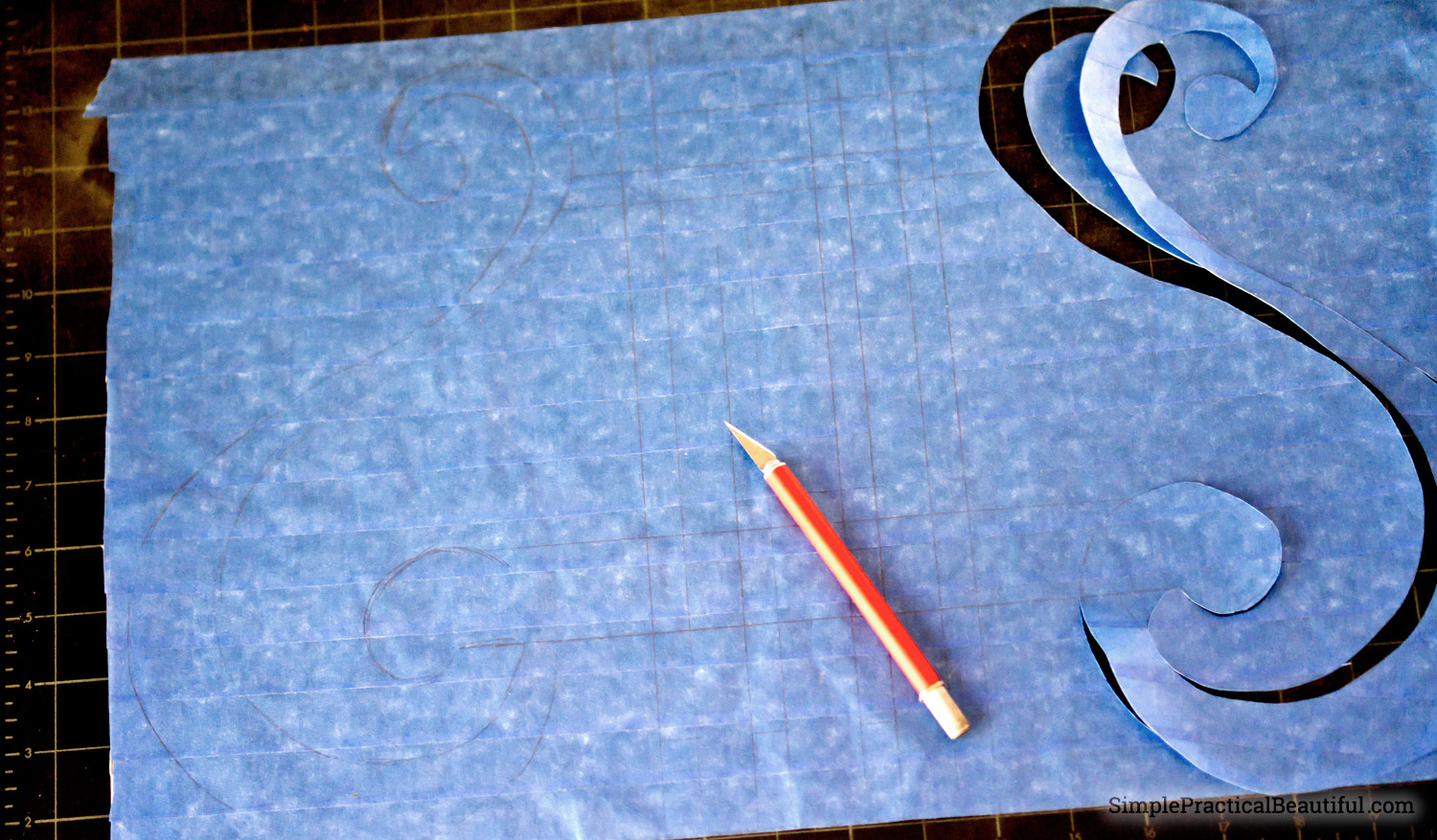 After my tape stencil was place on the music stand, I spray painted it with a few coats of copper paint, then removed the tape. The design wasn’t quite as smooth and crisp as I hoped it would be. 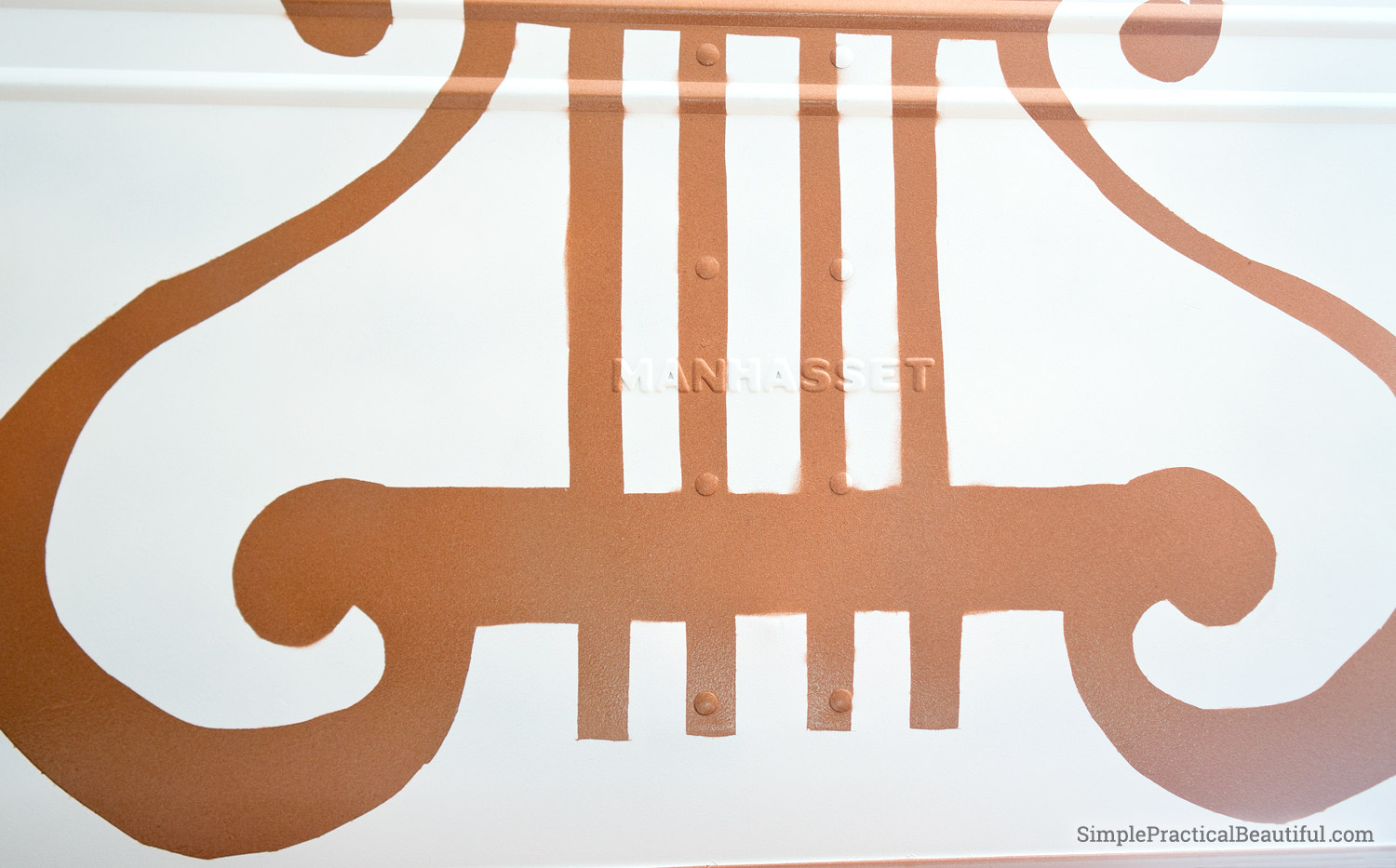 I used a brown Sharpie (the closest color I had to copper) and traced around the edge. My hand-tracing still isn’t as perfect as I would have liked, but it did finish the edges of the design better. 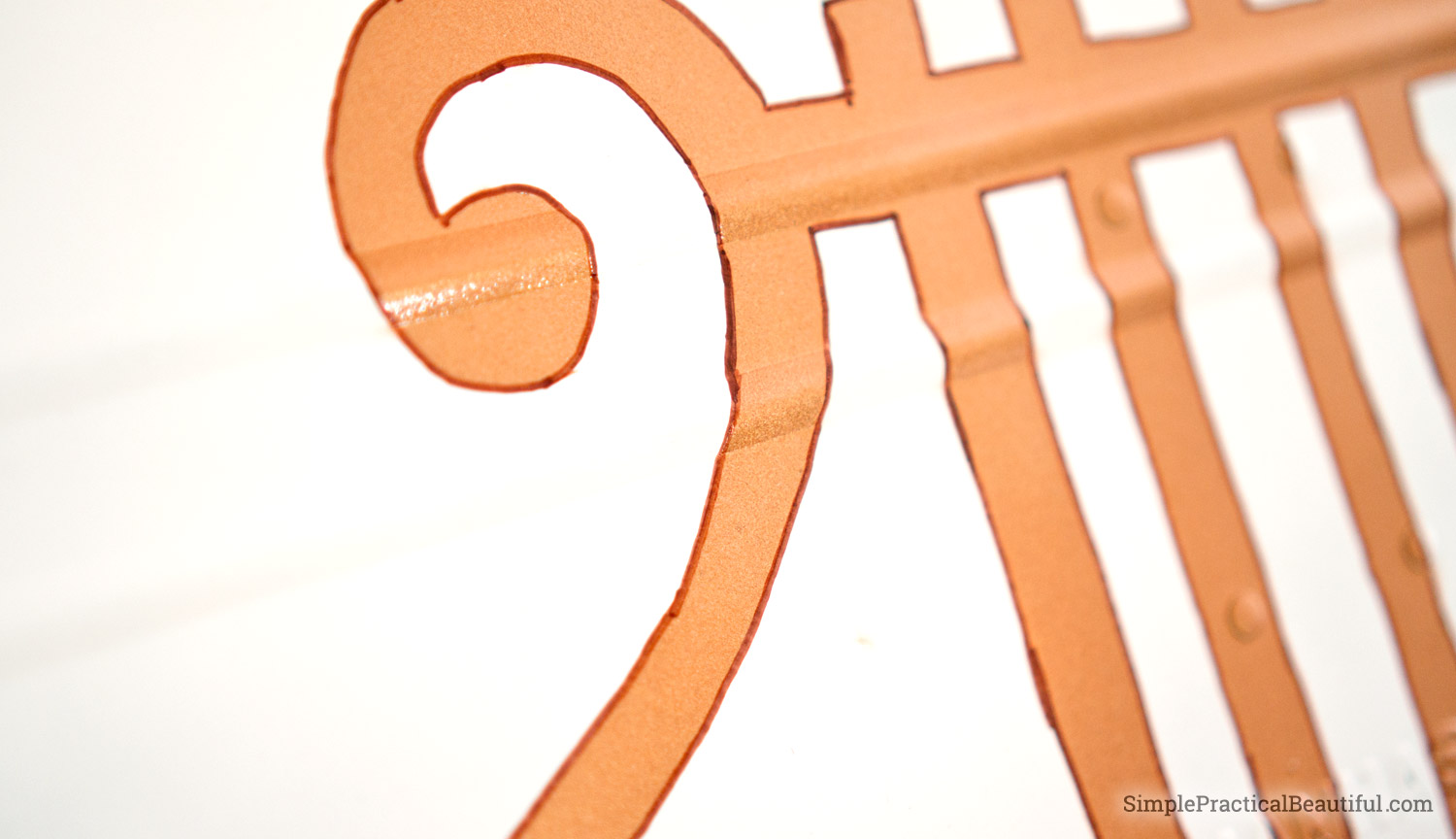 For the base of the stand, I wrapped twine around it after it was painted white. Then I sprayed copper spray paint over the twine. When I took off the twine, there was an interesting line pattern. 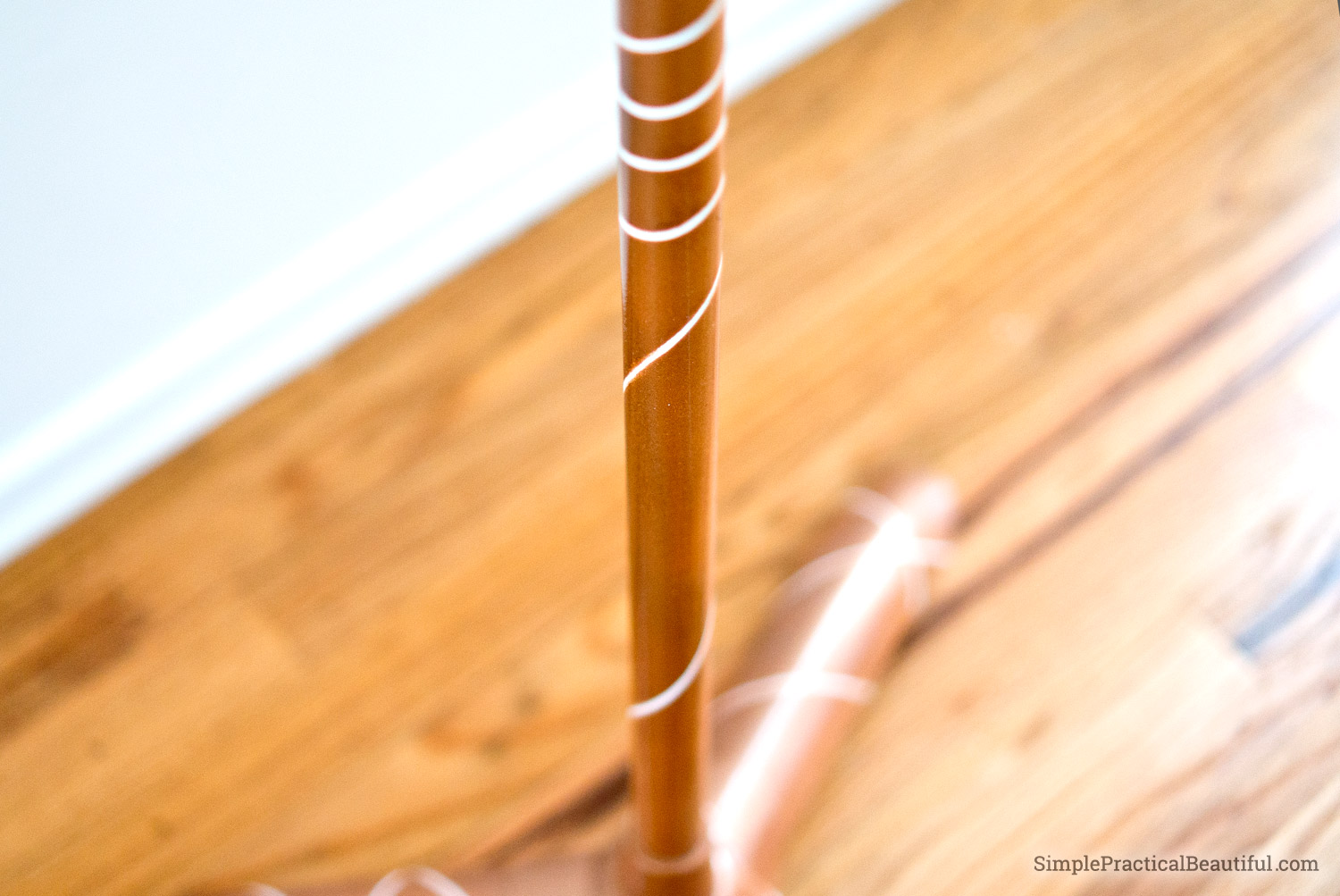 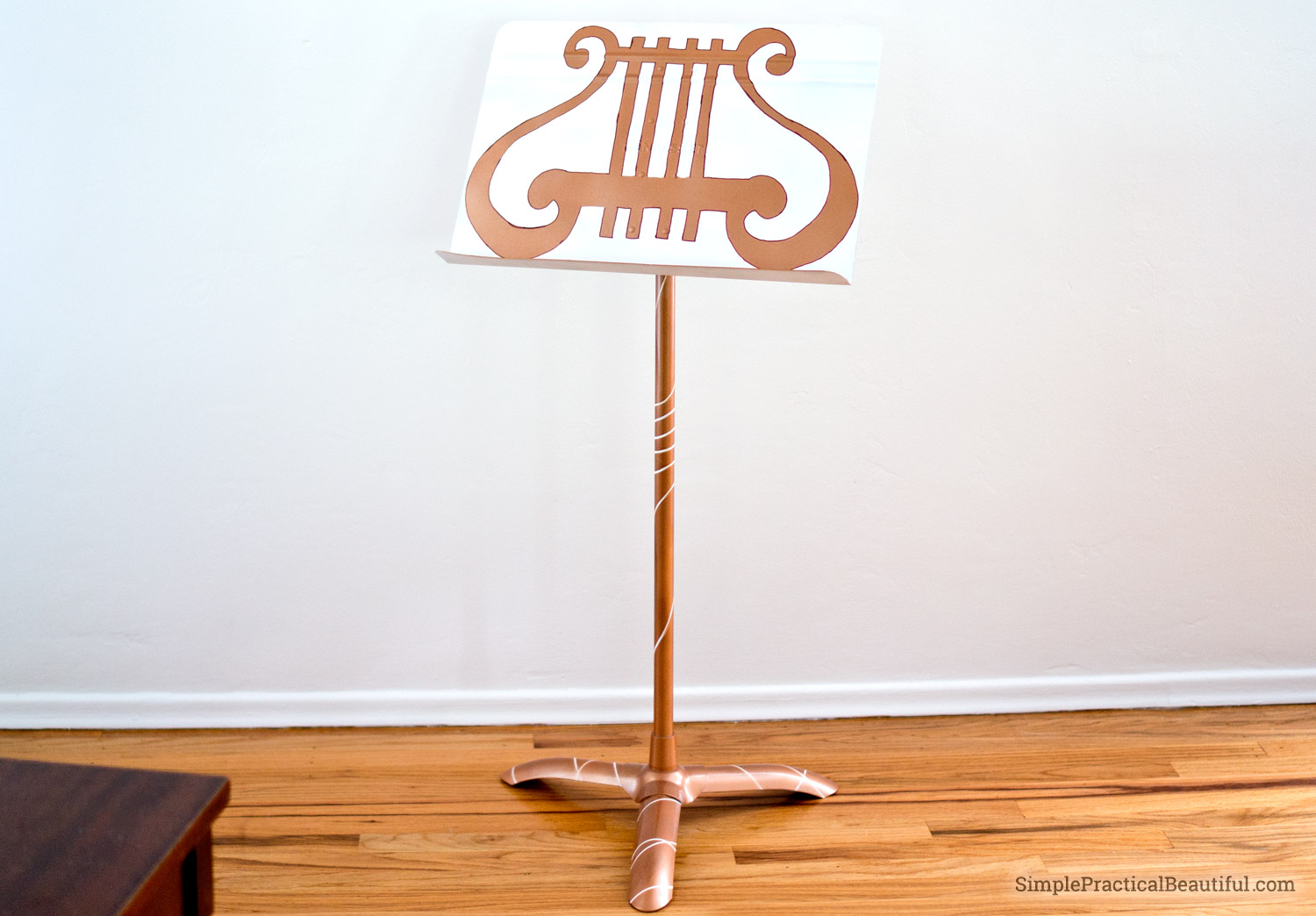 I wanted one of the stands to really appeal to the youth in the symphony, so I created a Minecraft design because Minecraft is really popular with my kids and their friends. 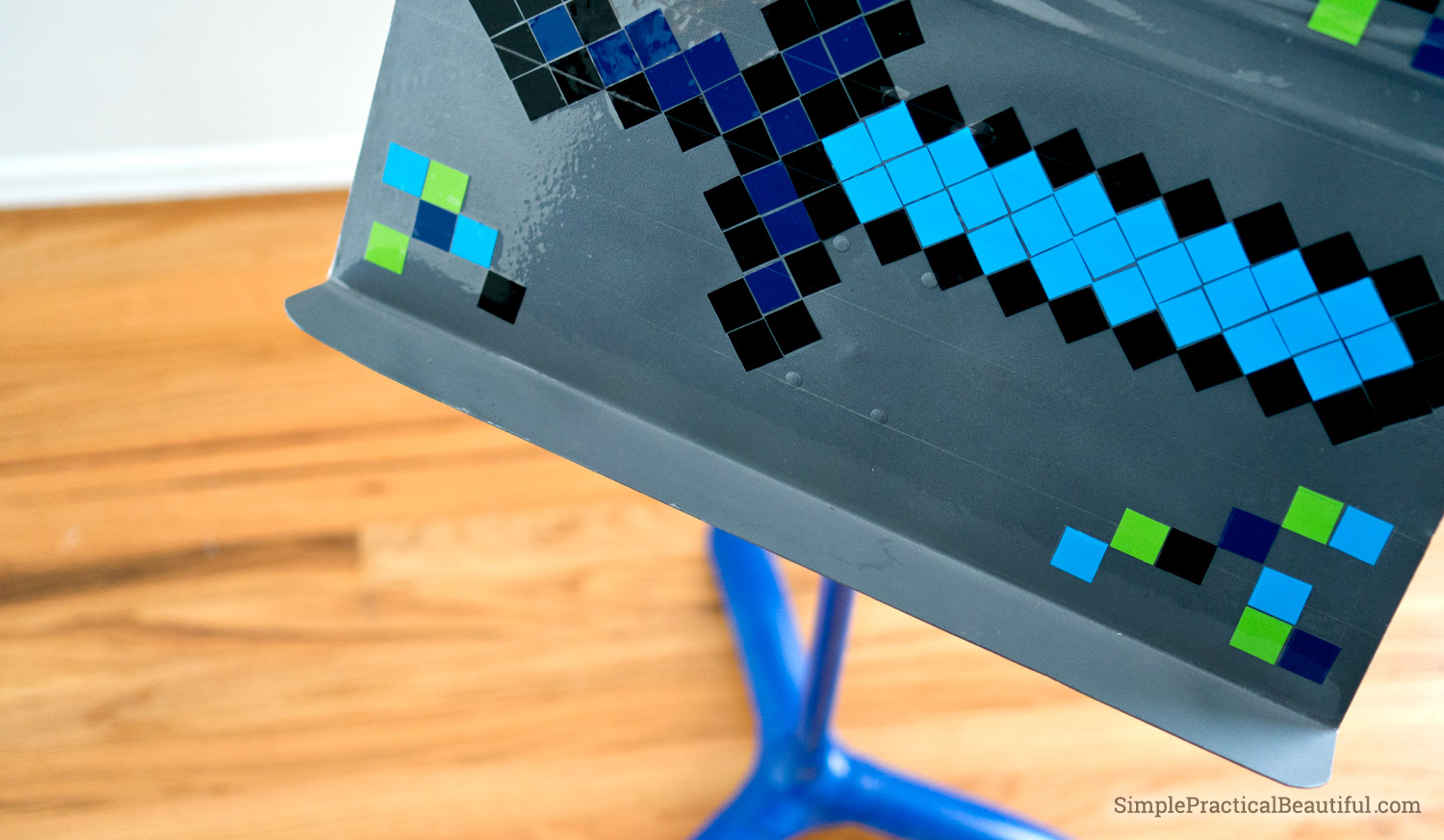 I found an image of the Minecraft sword and drew it on graph paper. Then I used vinyl squares I had from decorating our Lego bins and cut them into small squares so that 16 would fit as diamonds across the music stand. That took a little bit of fraction math. 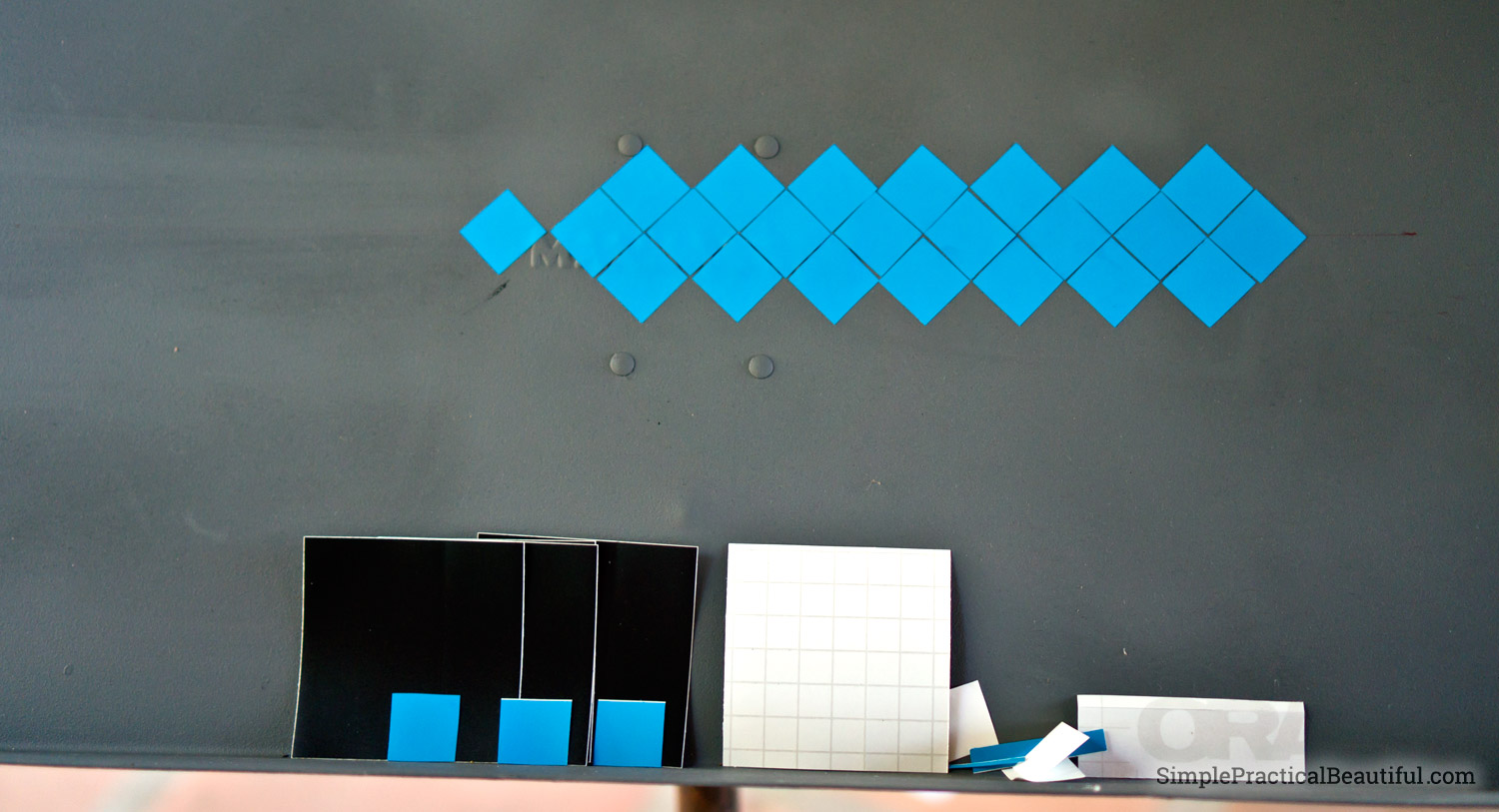 I started the design by drawing a line across the music stand. Then I started with the center squares of the design and lined them up along that line, and filled in the outside squares as I went. The line really helped the sword be straight.

I put a creeper on the back. 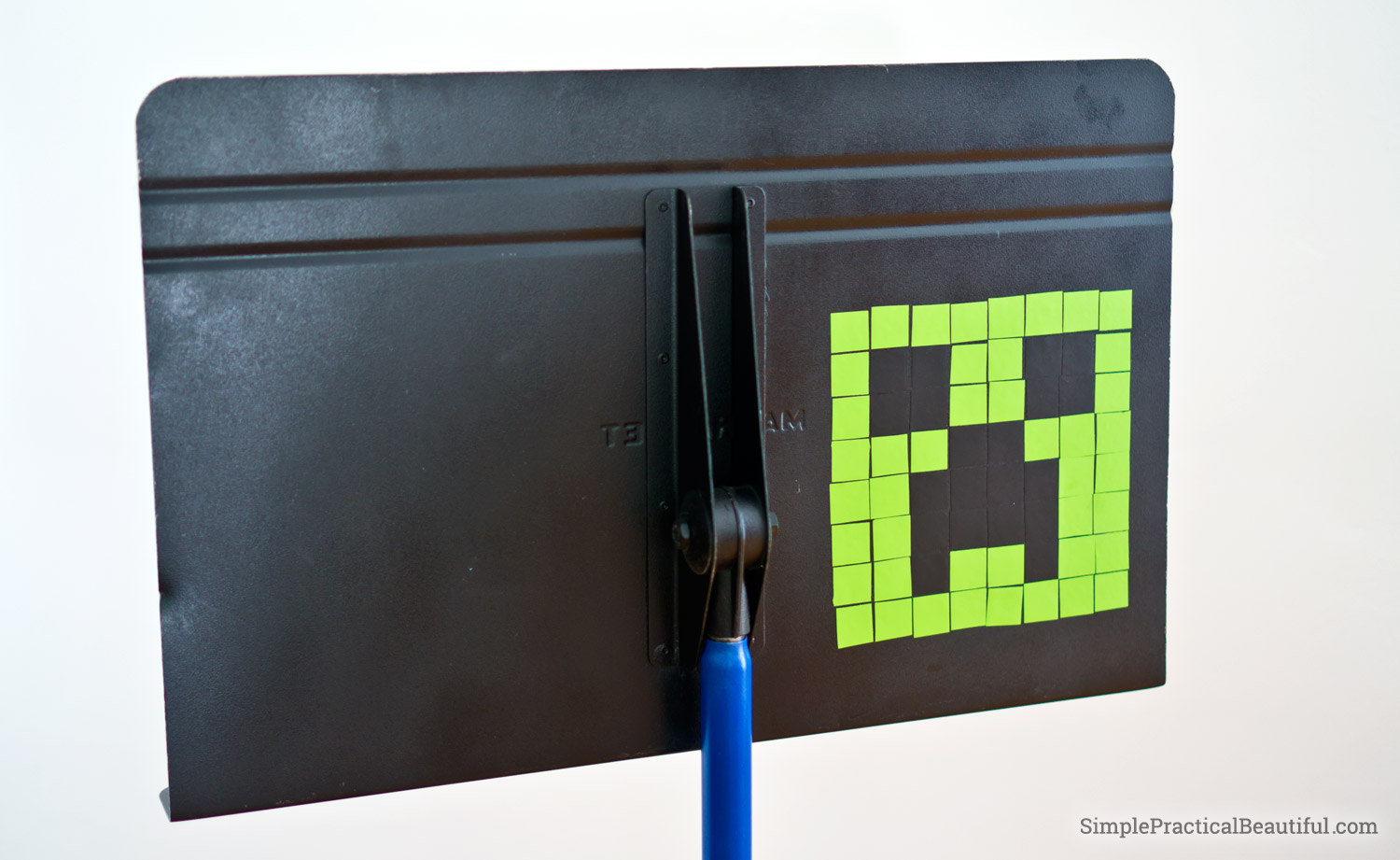 Unfortunately, the vinyl squares started peeling off along the bumps and screws of the stand. I tried adding different types of coatings, such as Mod Podge and Rust-Oleum’s Triple Thick Glaze. But nothing held them down.

I finally found that packaging tape stuck to the music stand better than anything else. So I layered strips of tape across the stand over the Minecraft pattern. So far, that’s held the vinyl down. 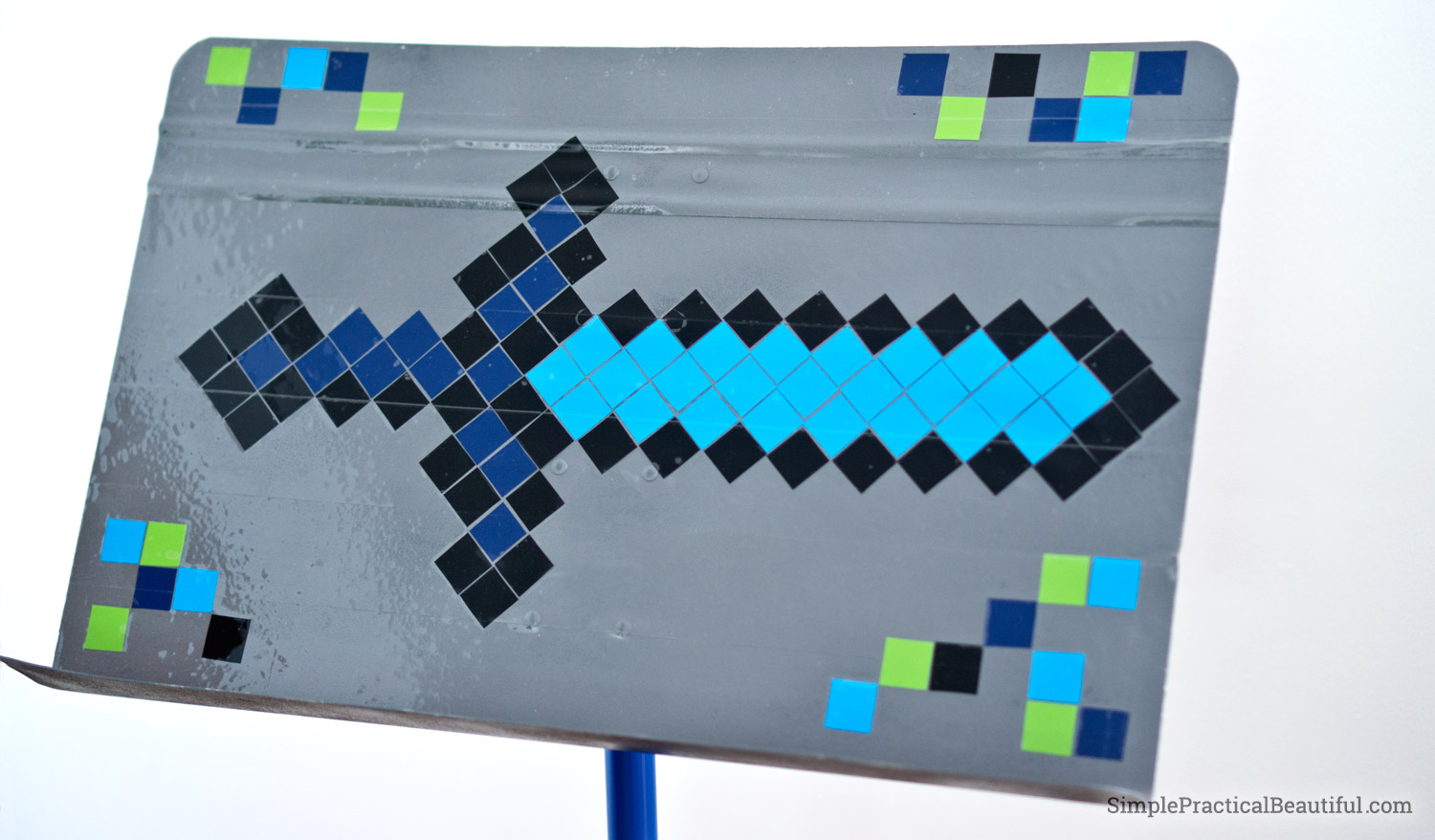 For the final music stand, I added three-dimensional elements. I cut up a dollar store bouquet for the pieces. First, I painted the music stand in a green and lavender to match the bouquet. I need to add that I painted the bottom of all four music stands. That’s where the rust was the worst, and Rust-Oleum spray paint is great at stopping rust. 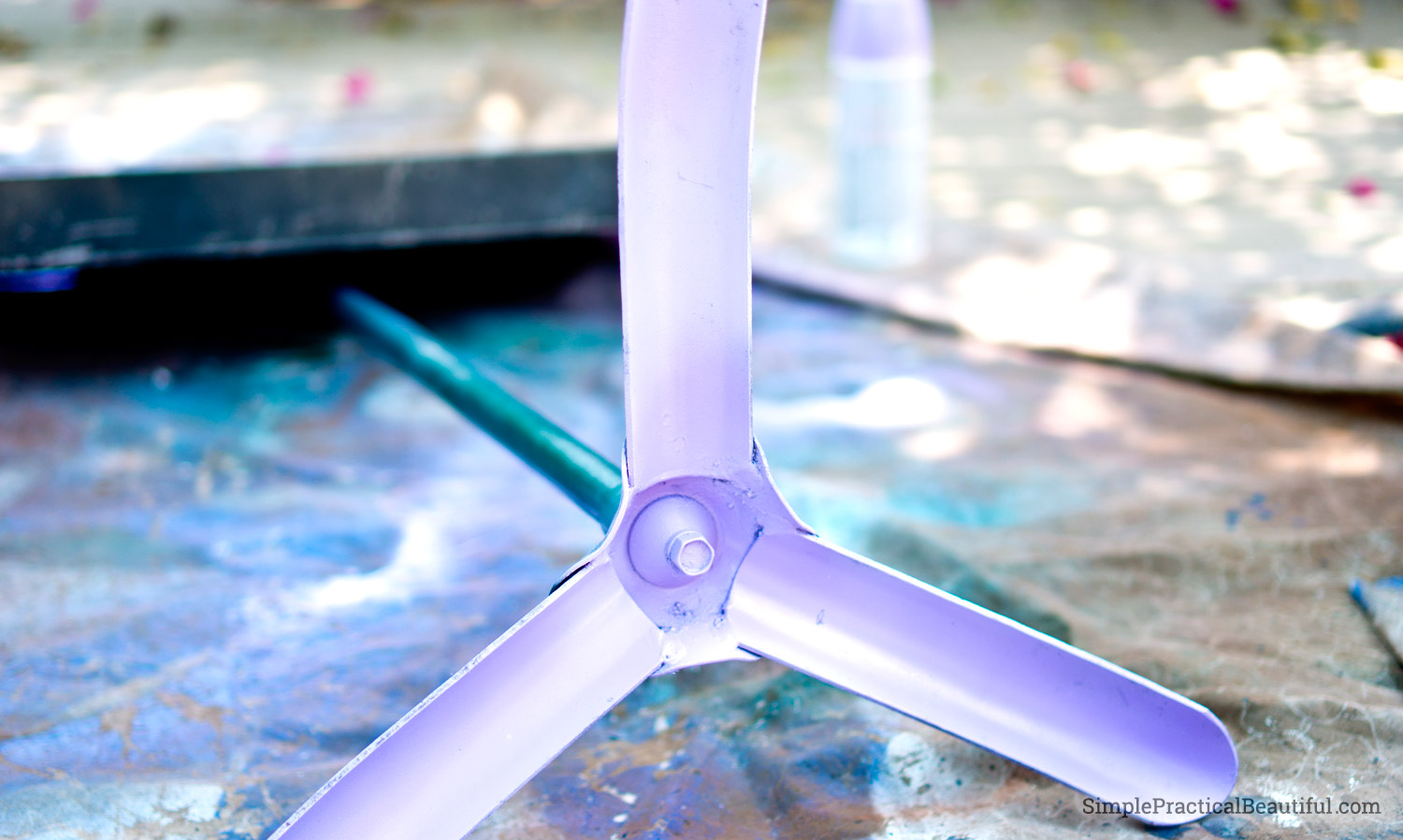 I covered wire with floral tape. That took a little time, but the final look was worth it. I wrapped the wire around the stand and attached the flowers and leaves using floral tape too. 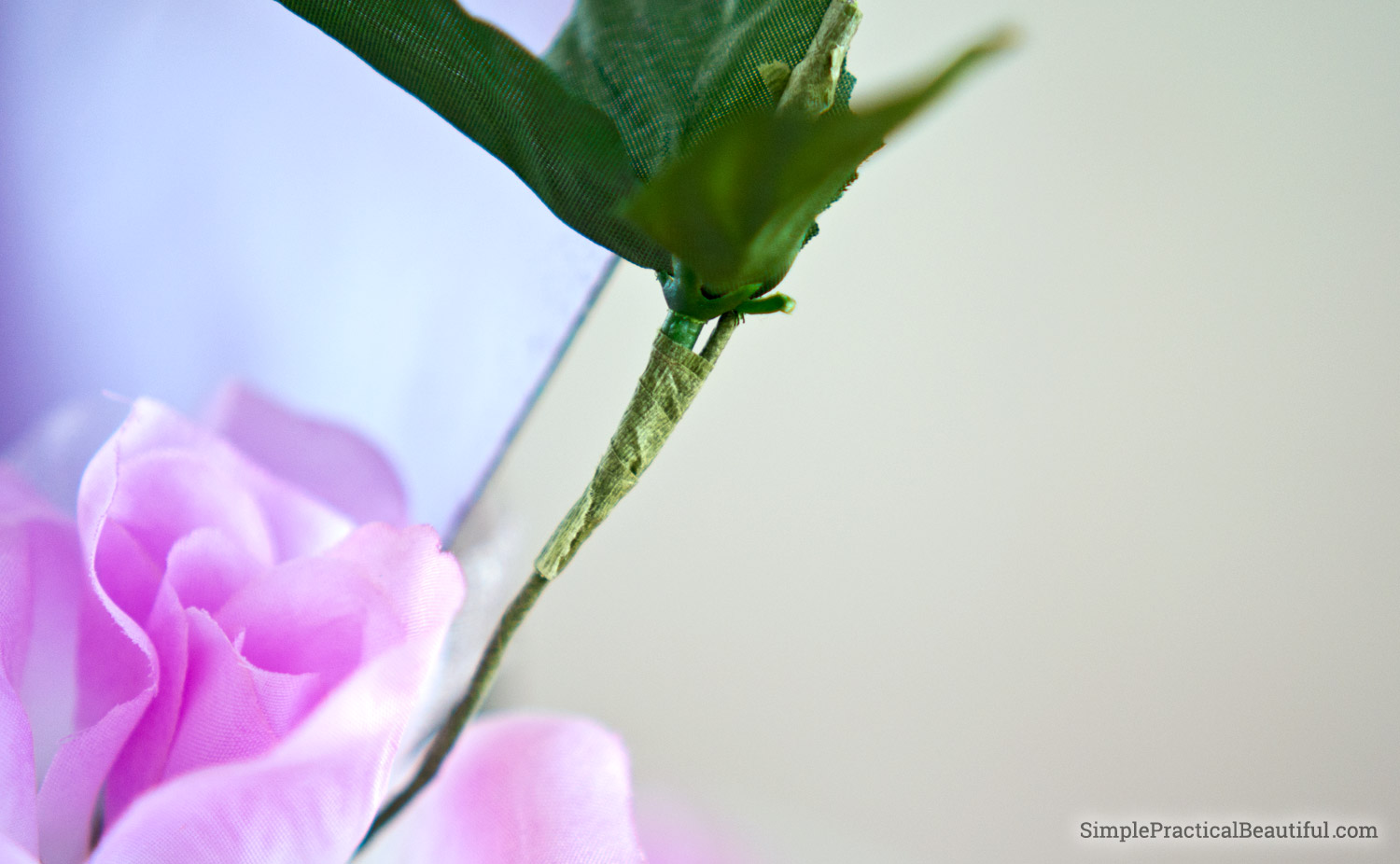 The Wire loops onto the side of the music stand and up over the back. I had to make sure that sheet music would still fit easily onto the stand. 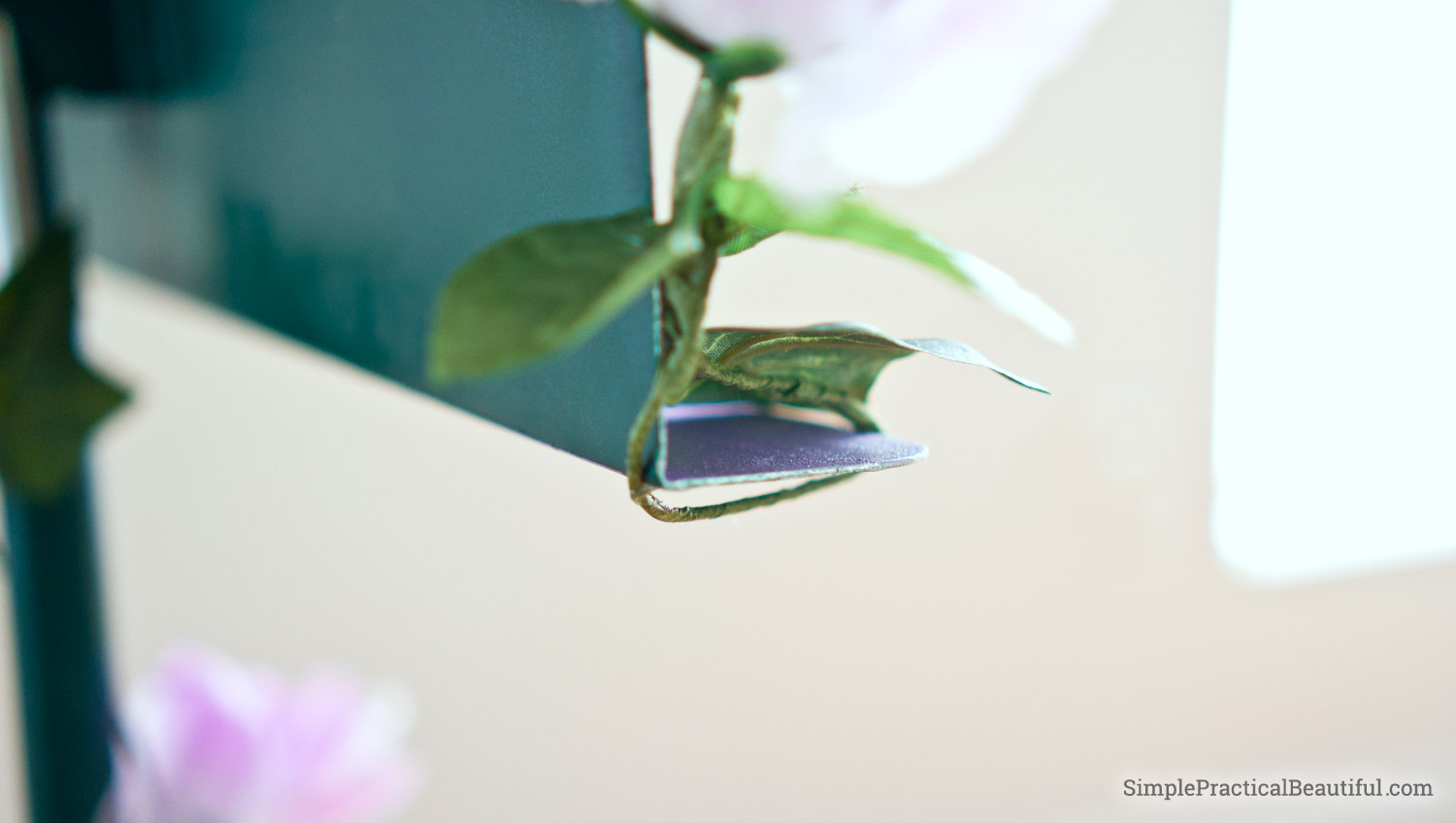 The wire alone held everything in place, but I wanted to be sure the wire wouldn’t come off when moving it, so I added a few spots of glue gun glue where the wire touched the edges of the stand. 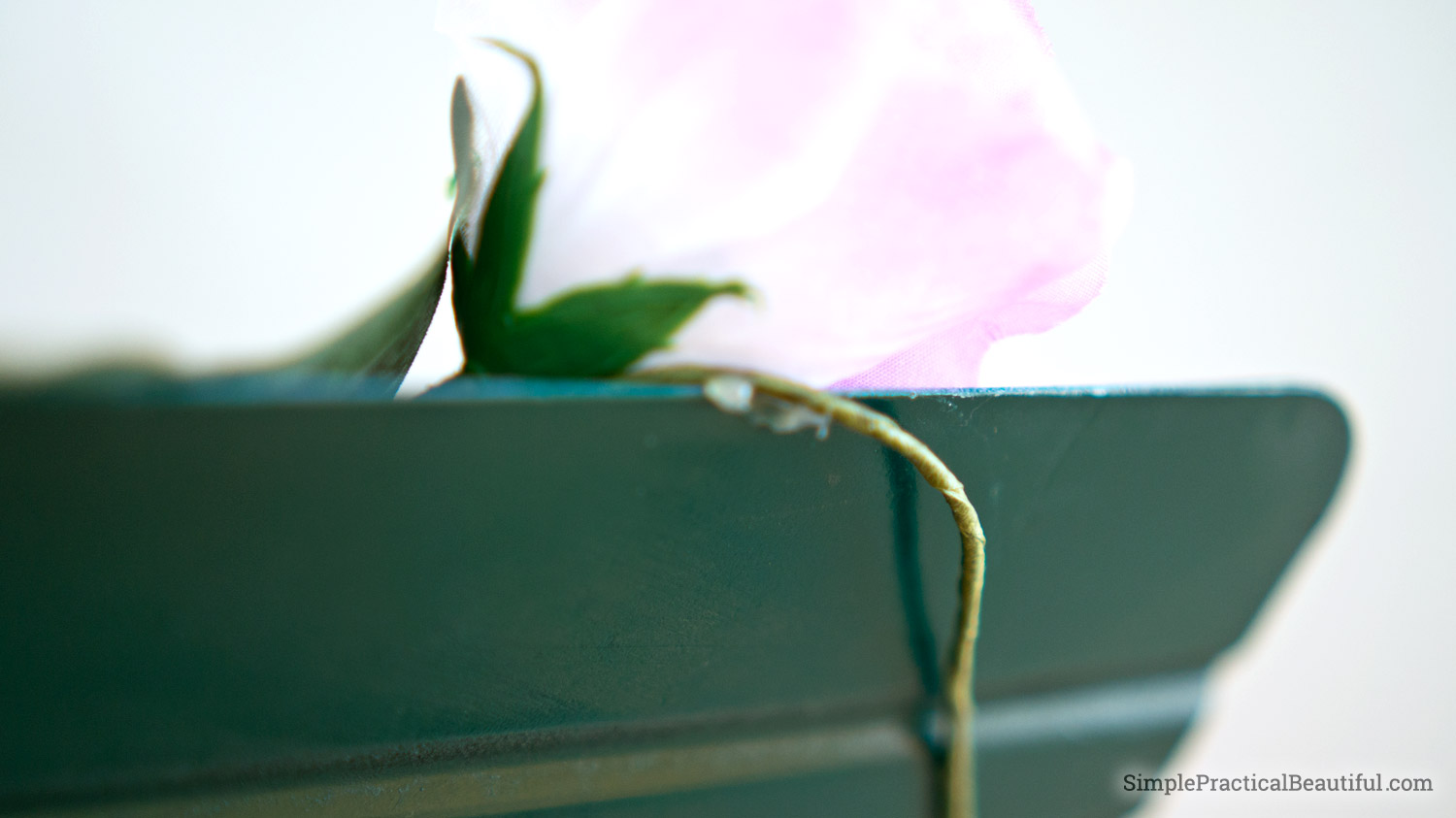 The flowers and leaves surround the front of the stand, but the can be lifted to allow sheet music underneath if needed. 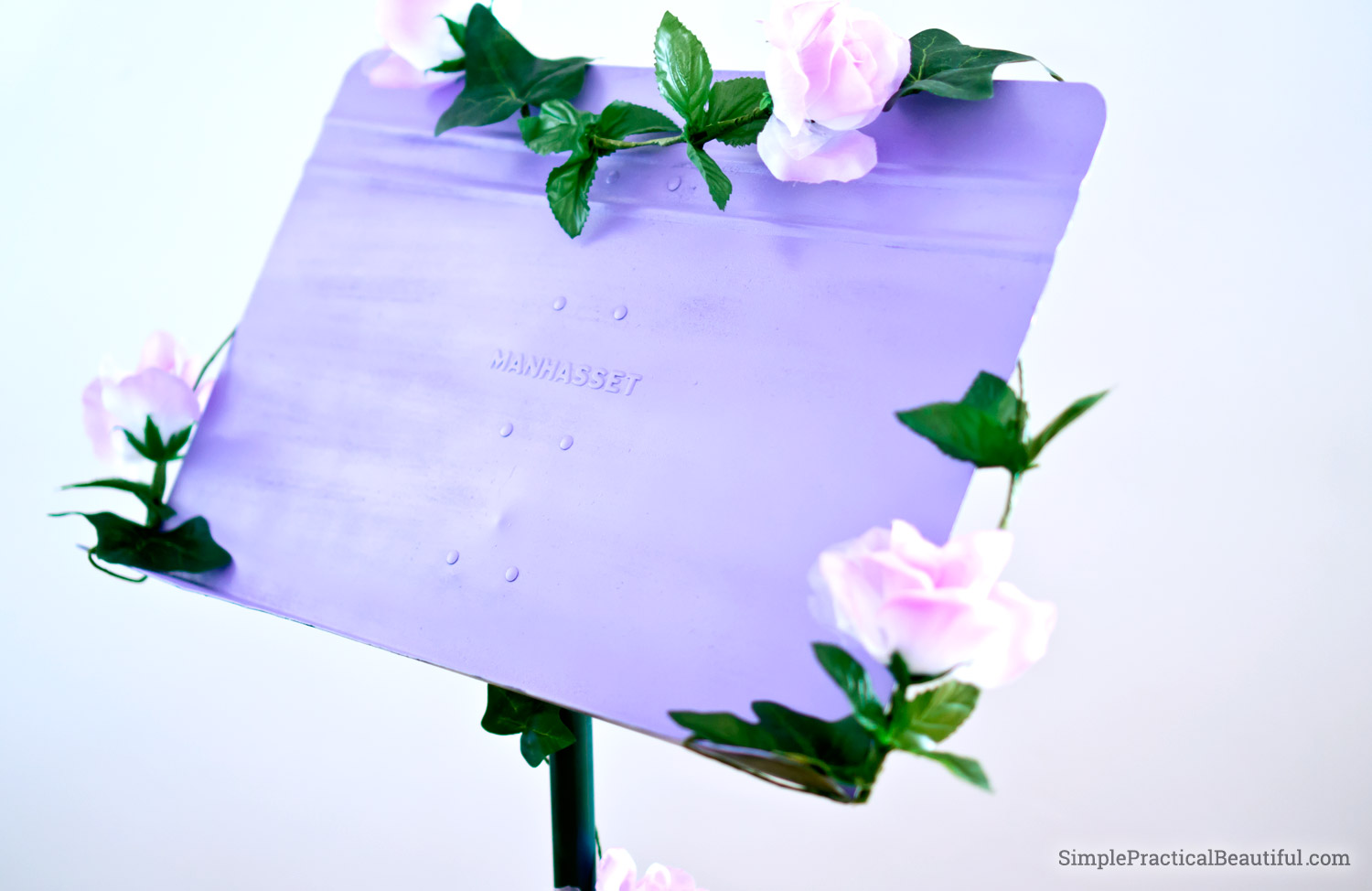 I also wrapped wire around the base and pole of the stand and attached flowers and leaves. This wire does not connect with the wire on top so that the music stand can still be raised and lowered. 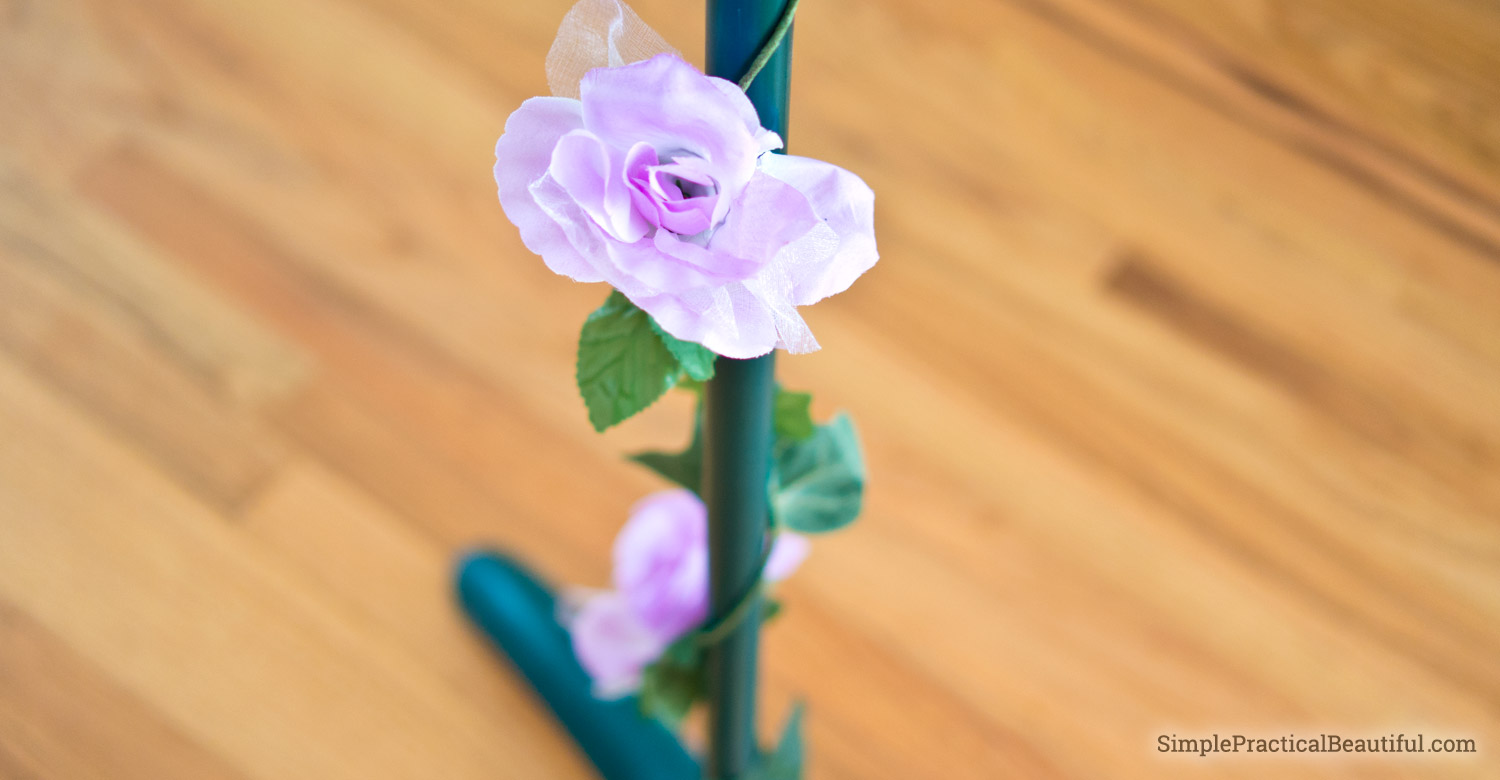 I think my refinished music stand turned out well, and I hope they raise money for our youth symphony. If you live in the San Diego area, take a minute to check out the East County Youth Symphony. They have concerts three times a year that are a wonderful way to support our aspiring musicians.